Teppen is a brand new mobile game developed by GungHo Online Entertainment. GungHo isn’t a newcomer in the mobile gaming space, the company is responsible for titles such as Galak-Z: Variant Mobile and Super Senso. Gungho’s latest game Teppen takes mechanics from various other card games, and mixes them with action elements. The game features 8 playable characters from the Capcom universe: Rathalos, Nergigante, Dante, Morrigan, Chun-Li, Ryu, Albert Wesker, and X. The graphics are very nice, the animations are well done, and the soundtrack includes the original themes of the various characters.

The game has just launched and thus only has 1 set of cards, but expect the developers to add more exciting content to the game through events and expansions. Despite the somewhat limited card pool, there’s already plenty of variety, and you will be able to build a deck for your favorite characters quickly. Read and check out our Teppen beginner’s guide, as we share with you a bunch of tips, cheats and strategies on how to build a powerful deck and get more cards!

Every leader has their own set of basic cards, cards that are only usable by that leader, and that can’t be created or reaped, you can only get them by completing each character’s story, a simple series of 3 missions that allows you to try the characters against the AI, while also giving some background information about the game’s lore. 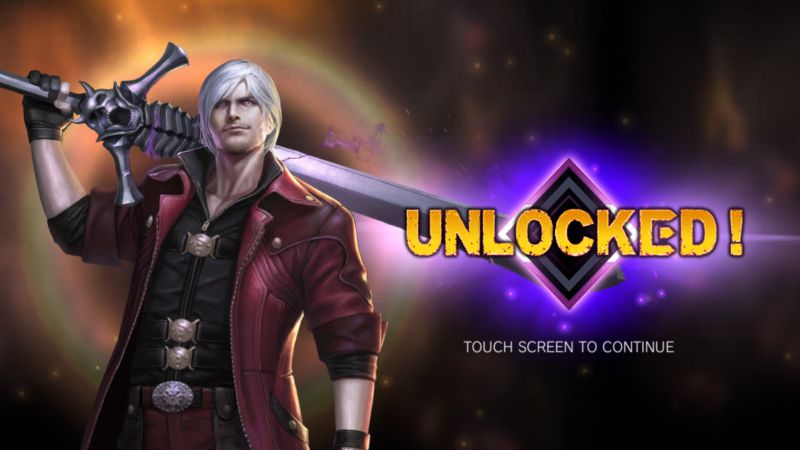 Unlocking characters is important, as each character belongs to a specific color, and can only play cards of that same color. Furthermore, they all have their own special ability, with its own specific effect, so playing the story with allow you to see what their abilities do, and will set you up to play any type of deck you want to. Also, basic cards of a leader can be used with the other leaders, and they always come in handy. Do not skip clearing through the story when you just start out, it doesn’t take long anyway.

Some daily missions are eligible to be completed while playing single player, for example the ones where you are asked to win with a deck of a specific color. Other than the story, there are also the Chronicles, missions that you play with a predetermined deck and set of rules, and that earn you additional rewards upon completion.

The gameplay of TEPPEN is different from that of any other card game. You don’t take turns playing cards, instead you play cards on the go, based on how much Mana you currently have. Mana is represented by the bar below the playing field. It recharges in real time, so you will have to pay attention to what’s happening in the game, and be ready to summon your units and cast your spells at the right time. 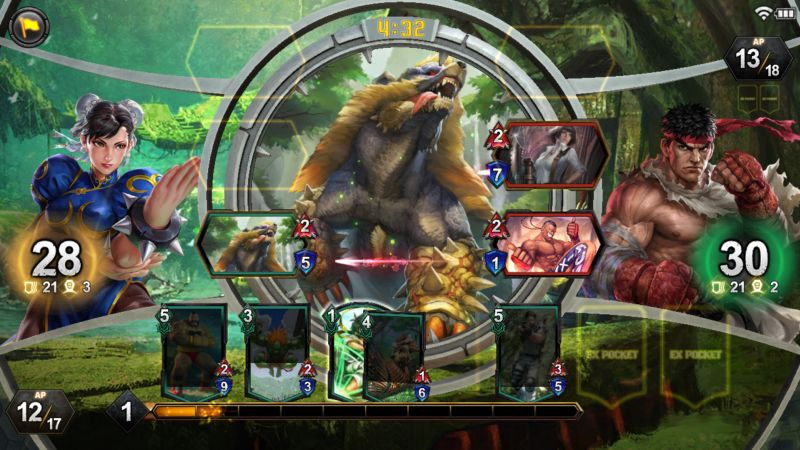 You start the game with 4 Mana Points, which recharge over time. You can spend Mana Points to use your cards. You can summon units at any point in time, so you can for example play one when an enemy unit is about to deal damage to you, gaining a surprise kill, defending your precious Life Points.

Action cards are like Instants in Magic: The Gathering, you can play them whenever you want. The game borrows another concept from Magic: The Gathering: effects from Action cards resolve based on when they were played: the last Action card played resolves first. When you play an Action card the game timer stops, and your opponent has some seconds to decide whether or not they want to answer your play with their own Action cards. You can also play Action cards that don’t directly influence the outcome of the current queue. This comes in handy when you don’t want your Action card to be countered, as your opponent will have expended his Mana Points on something else, and won’t have enough left to counter your play. For example, when playing against a Red deck, they could play Path of the Warrior to deal 3 damage to your defending creature, kill it before it could defend from an attack, and kill you. But you can then answer this play by playing a card like Secure Supply Route, whose effect will resolve before Path of the Warrior’s and save your creature, saving you the game. You are always trying to answer your opponent’s plays, while they try to answer yours.

As we already said, each leader has their own unique ability called Hero Art, which can be used in battle. To do so, you will first need to charge up your AP (Action Points), by playing cards. Each Mana Point spent equals an Action Point gained, when you have enough (the amount you need depends on the leader), you can use your Hero Art. What’s so powerful about these abilities is that, unlike Action cards, they can’t be countered, if a Hero Art gets used, its effect will happen no matter what. This makes offensive arts like Ryu’s Shinku Hadoken better than defensive abilities like X’s Heart Tank, as defensive abilities are generally better used as an answer to specific offensive plays to your opponent, but you can’t use Hero Arts as an answer, you need to be proactive with them. 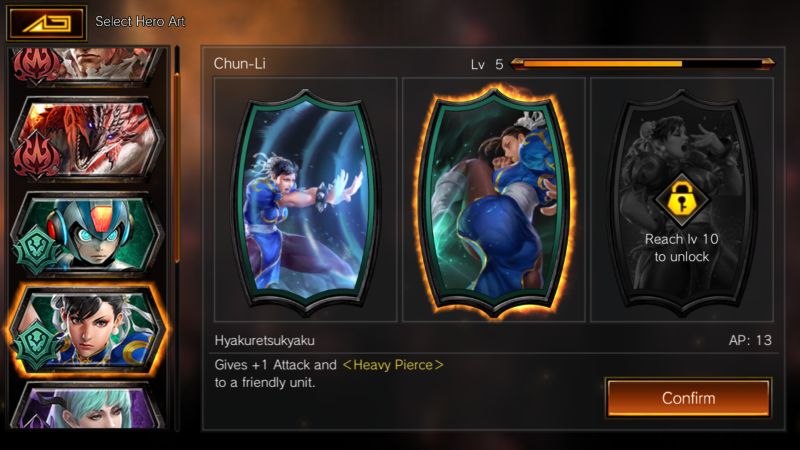 Each leader has access to three different special abilities, although when you unlock them you will only have access to one. To unlock the other two, you will have to play matches with the hero and level them up. Each hero is different, and the best choice of Hero Art depends on your deck composition. You can check what these do by creating a new deck and selecting a leader, the three arts will be right there. You unlock new Hero Arts at level 3, and 10.

Units can have various traits, some, like Flight or MP boost are always active, some activate when the cards are played, others activate when the unit kills an enemy unit, and lastly, there are abilities like Resonate or Revenge that activate respectively when you play an Action card and when the unit dies. You can see what these effects do by accessing the Cards menu, and tapping on the card you want to know more of. These effects are highlighted in Yellow, just tap on the yellow text and a popup will tell you what the effect does.

The Deck Builder is the place where you will spend most of your time, at least at the beginning. Trying out all the crazy combinations you can pull off, and seeing what cards you like most are at the core of the experience of every card game, and Teppen is not any different.

The cards you can choose depend on which color you picked. Each color has its own quirks and mechanics: Red is all about burning down your opponents with damage effects and unit buffs, Green is more defensive in nature, with heals and shield effects on a lot of cards. Purple focuses on control, with cards that inflict the Halt status (stops an enemy unit from attacking or blocking for 13 seconds) and lower the enemy’s attack. Lastly, Black’s theme is centered around the Revenge mechanic (defeated units go back to your deck instead of getting sent to the Graveyard, and their cost is reduced in half, as well as gaining additional stats) and using your own Life Points as a resource.

Related: Teppen Deck-Building Guide: How to Build a Powerful Deck to Climb Through the Ranks

You can build decks that contain multiple colors, but there are restrictions in doing so. A deck with cards of two different colors can only have cards that cost up to 5 MP in them. You can get even crazier and play cards from 3 different colors, but then the restriction will become of 3 MP. Additionally, you do not necessarily have to play cards of the same color of the leader, but this also gives you the same penalty as if you were playing two different colors. You cannot play 30 Black cards with Chun-Li as a leader and expect to play cards that cost up to 10 MP. This makes building single color decks of a color different than the one of the leaders not worth it, unless you are playing in tournaments or with friends with specific rulesets. 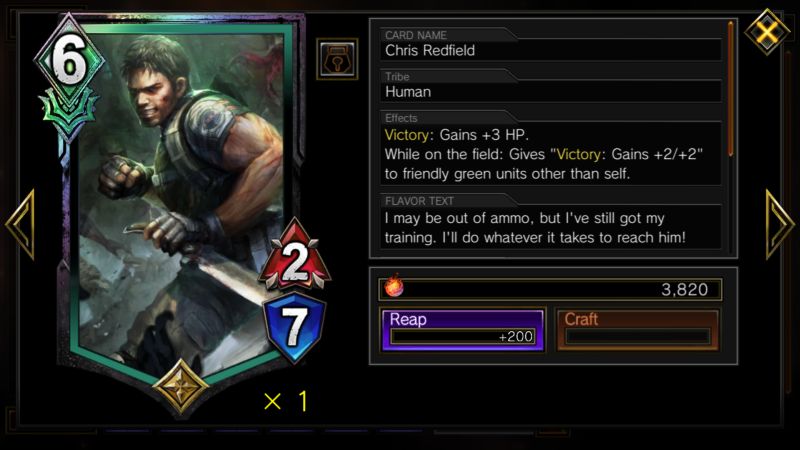 Cards come in different rarities: Common, Rare, Epic, Legendary. Higher rarity cards are on average better than the lower rarity ones, but do not get blinded by this fact: lower tier cards usually have better synergies between themselves, and can support the rarer ones better. The rarity of the cards also determines how many Souls you get for reaping them, and how many Souls you need to craft them. Common cards give you 10 Souls when reaped, and cost 50 to craft, Rare cards give 50 Souls and cost 200, Epic souls reap for 200 Souls, and cost 800 to craft, and lastly, Legendary card will net you 800 Souls if you reap them, and will cost you a whopping 3200 Souls. You can only play a single copy of a Legendary card, they are crazy powerful, but you won’t always draw them because of this limitation.

Cards also have a class, they can be Normal, Golden, or Secret. This classification is purely for cosmetic reasons: Golden cards glow, and Secret cards have the same glow as Golden cards, while also being animated. They look very nice, but you can’t craft them, so it’s up to chance whether or not you find any in your packs.

4. How To Get More Cards

Crafting is great and all, but you will need Souls to craft cards, and Souls are earned by destroying the cards you already have in excess. There is no point in having more than three copies of the same card, and the Cards screen allows you to reap any extra card you can’t use. You can reap any card that isn’t part of the Basic set, so if you don’t expect to be playing some cards in the near future, feel free to reap them if you really need the Souls to craft a card you need to finish a deck. 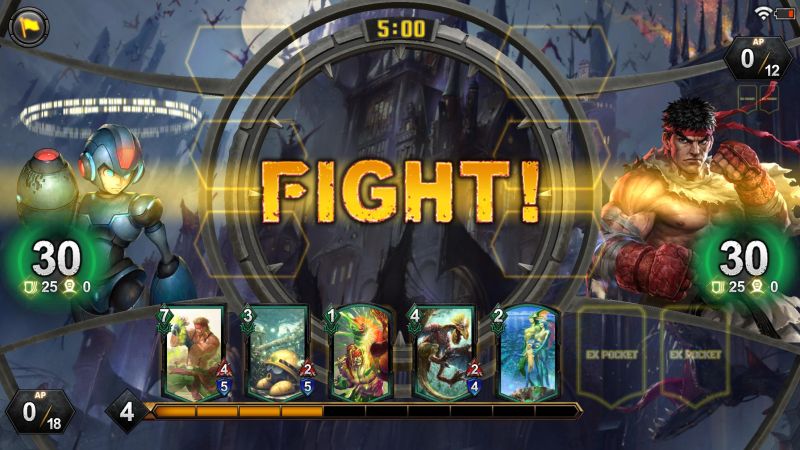 You earn additional Basic cards by leveling up with each specific hero, so make sure to play all of them! This will also teach you about their playstyle and their Hero Arts, making you more effective when you play against them.

Compete in the Grand Prix, a limited time game mode unlocked by reaching rank D, to earn even more rewards regularly, just by playing in it. Aside from completing the various Stories, and Chronicles, the game also offers Daily Missions and Achievements to earn additional rewards. You can check them out in the Missions tab, which you can access from the main menu, on top of the screen.

Achievements range from just playing the game, winning battles with specific heroes, to reaching specific ranks. They represent milestones of your progress through the game, they allow you to know how much you have played with each hero, and other significant statistics.

The game also offers the opportunity to purchase a Season Pass, a set of rewards and missions that will earn you even more rewards, and that lasts a specific amount of time. You can see from the missions’ tab what kind of missions to expect from a Season Pass, and you can purchase one in the Shop.

This wraps up our beginner’s guide for Teppen, the game is super fun, and it is a new take on a genre that felt a bit stagnating in recent times. The action-packed gameplay that borrows some mechanics from Magic: The Gathering, while keeping Hearthstone’s accessibility will keep you occupied with hours and hours of gameplay. The hero powers add unpredictability to the mix, and the mechanics of the Action cards make you feel as if you could always do something to stop your opponents on their tracks. If you have found any other tips or tricks, please let us know in the comments below!