The game offers up a variety of strategies and tactics depending on which heroes you manage to gain while playing. You’d think you’ll definitely lose to any team based on their current power. You’d be amazed how many times you’ll win just by simply rearranging your heroes in a certain way! Unfortunately, the biggest problem is which heroes to include in your team and where to place them? Well, in this Mobile Legends: Adventure team guide, we are going to share with you a bunch of tips, tricks and strategies to build a powerful team! 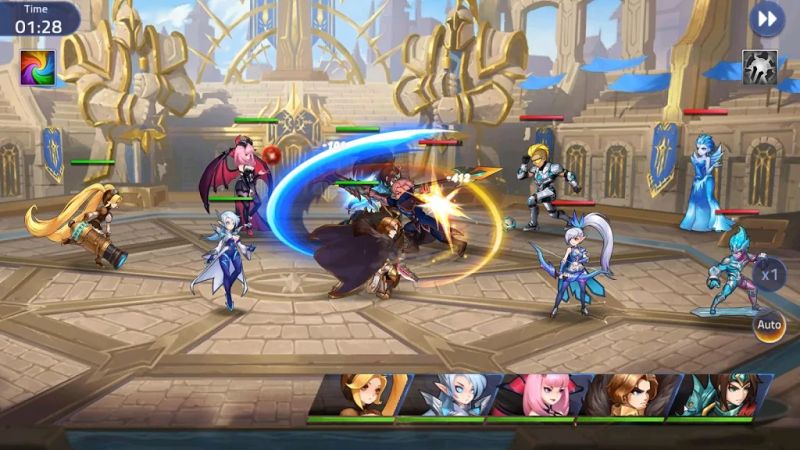 2. Pay Attention To The Placement Of Your Heroes

This refers to having one of each type of hero. There are 5 different types of heroes in total. This buff offers the least amount of power boost which is the bad news. The good news is that this is the easiest Resonance Buff in Mobile Legends: Adventure to gain. The other good news is that this also offers up the highest amounts of strategies and tactics for team building. 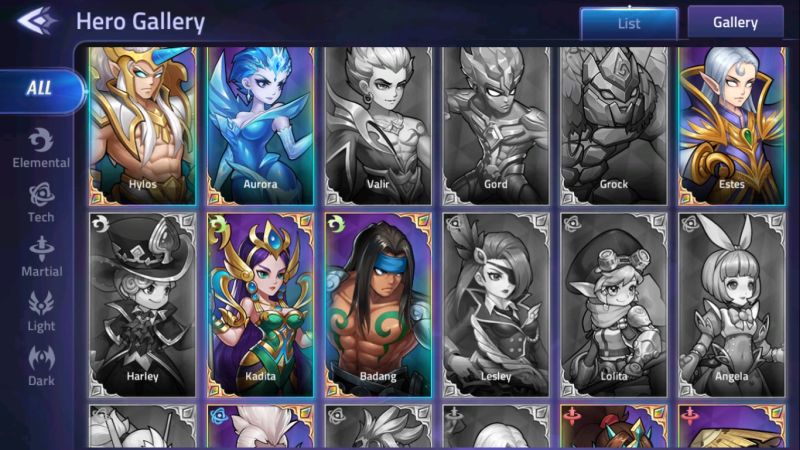 Start off with Estes in the back row. Quite simply put, Estes is the best healer in Mobile Legends: Adventure. Next is to add in Lolita in the front row because she’s both destructive and very hard to kill. Add in Yi Sun-Shin in the middle row or the front row. This gives you a strong ranged or a stronger melee attacker and the Martial type is covered! Next is to include Odette in the back row. She’s one of the heaviest hitters in the game due to her passive at level 81 or higher. Lastly, place Argus in the middle row. This will increase his survival rate drastically. You’ll even seen Argus in the middle row as “the last man standing” due to his ultimate skill making him nearly unstoppable.

This refers to having 3 different heroes of the same type on you team. The trick here is that you can still have any 2 other heroes that you want on your team at the same time. With this, Mobile Legends: Adventure left you a chance to even get the 3+2 and the 5 Heroes Resonance Buff (one or the other). Here we’ll provide you with a set of 3 hero combinations to try out. From there, it’s pretty much anything goes!

For Elemental, you’ll want Hylos and Badang in the front row and Estes in the middle or back row depending on the other team members. This is a tank + fighter front end and an included healer helping to keep your front end heroes alive. Hylos is surprisingly tough and he can heal himself while boosting the attack of other team members. Badang can disrupt and hit multiple targets! Badang is no slouch in the survival department as well! 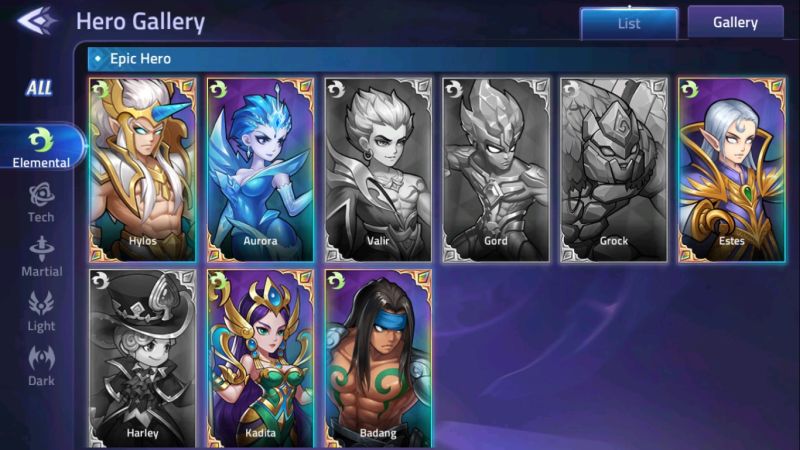 For Tech, you’ll want Lesley, Lolita, and Angela. Lolita is a strong tanker with good destructive power. Use Lesley on the back row for a pretty lethal ranged attacker. Angela in the middle row serves nicely for some healing but serves much better as a shield provider. If she attaches herself to Lolita, the combination of shields makes them both extremely hard to kill. As a tank, Lolita will have plenty of focus already on her. That leaves Lesley wide open to bomb everything she can! 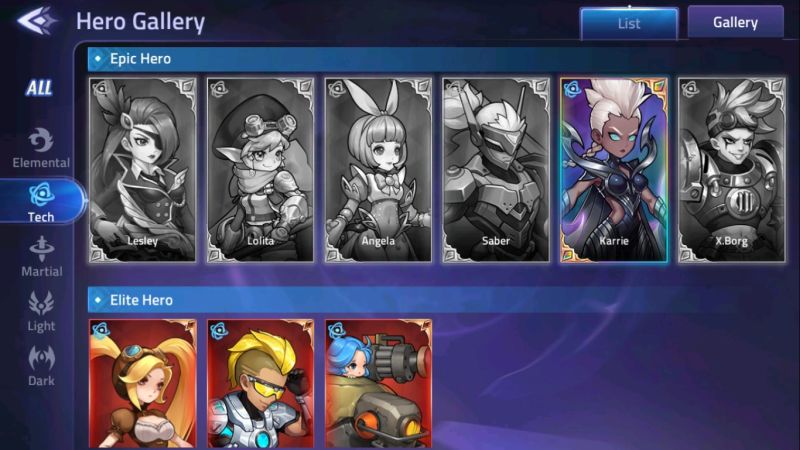 For Martial, you’ll want to mix Lancelot with Yi Sun-Shi and Franco. This makes for an interesting combination in Mobile Legends: Adventure. With Yi Sun-Shin in the front row with Franco, you’ll have a double tank team. With Yi Sun-Shin in the middle or back row you can have Franco and Lancelot in the front row for a tank + fighter front row with an included ranged attacker. Lancelot makes for an excellent addition to the team. This is because Lancelot can get into the back row of the opponent’s team instantly which can be very disruptive for your opponents! 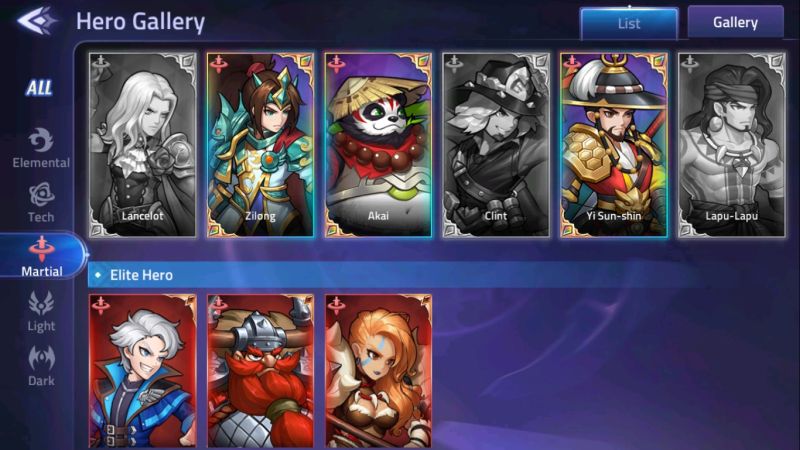 The Light type heroes section in Mobile Legends: Adventure is a bit tricky because there aren’t that many of them! But make no mistake, they are quite powerful. Anyways, mix Minsitthar with Rafaela and Odette. There’s no surprise with Odette since she’s one of the heaviest hitters in the game. Once she casts a skill, her passive will automatically fire with the next basic attack and bounce around the enemies. Naturally having a healer on your team can be very helpful. Unfortunately, Estes is the stronger mass healer compared to Rafaela. But Rafaela can make up for it with her attacks. Minsitthar is the tricky part. He makes for a nice and destructive front row hero due to his summons. The Minsitthar summons is not permanent but they do cause enough damage to make a big difference. 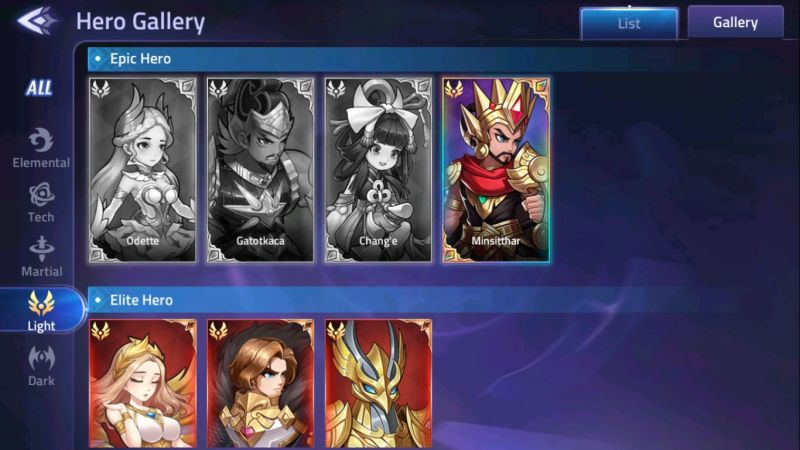 The Dark type heroes of Mobile Legends: Adventure make for some very nasty combinations to use on your opponents! Start with Argus either in the front row or middle row depending on the rest of your team. His ultimate skill makes him incredibly difficult, nearly impossible, to defeat. Again, the more a hero hits and gets hit without getting killed, the more energy that hero gains. You’ll have to notice that skills have no cool down timers. So if Argus keeps gaining the energy to use his ultimate skill, he keeps going. Definitely add in Alice in the middle row. 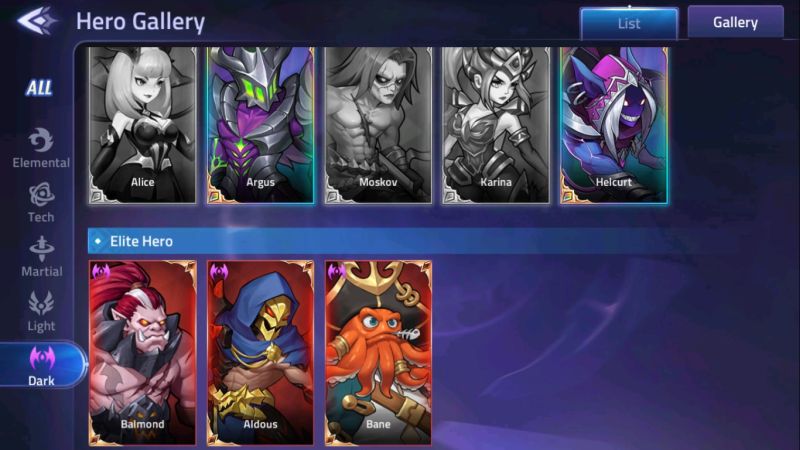 You’d want her to be within range of as much as possible when she uses her ultimate skill. Alice is another hero that’s very tough to kill. Lastly, add in Moskov for a very nice to have ranged attacker. Moskov can also stun/disrupt the opponent’s heroes by slamming them into each other.

The idea here is to take the above given 3 hero teams and add in two more heroes of a different type. You simply use 2 heroes of another type compared to the types given above. This opens up quite a lot of strategies and tactics in Mobile Legends: Adventure and makes for some very mean combinations!

Include Angela + Layla or Lesley. Layla is a good bet since she can hit multiple targets with her ultimate skill. Or you can include Angela + Lolita. This is a multi-tank team build.

Include Lancelot and Yi Sun-Shin. This can have all kinds of tanking builds depending on the placement of heroes. Or you can include Franco in place of either Lancelot or Yi Sun-Shin.

Include Rafaela and Odette. This would be a double hitter and one of the heaviest hitters in Mobile Legends: Adventure.

Include Hylos and Estes or Valir and Gord. You’ll have another tanker and the best healer in Mobile Legends: Adventure. Both Valir and Gord have wide spread destruction skills. They’re both a bit faster on the attack compared to Aurora.

Include Lancelot and Yi Sun-Shin or Franco as explained above.

Include Rafaela and either Chang’e, Odette, or Minsitthar. The Tech team doesn’t really have a great healer so Rafaela makes for a great inclusion.

Definitely include Estes since Martials don’t have a healer! You can take either Valir or Gord. Both of them make for an excellent bomber.

Layla and Lesley make for excellent ranged attackers to mix with potentially 3 tanker type heroes. Yes, that’s even though some of them are not listed as tank type heroes! At least 2 of them are tanking anyway!

Include Rafaela and Odette or Minsitthar or Chang’e. You’d want the healer in the mix! The second Light hero to include is entirely up to you depending on what you have at the time.

Really?! You haven’t already figured out to include Alice and Argus?!

Include Estes for a double healer setup along with Hylos for a tough tank. Add Gord and/or Valir if you want ranged bombers.

Include Lancelot with either Yi Sun-Shin or Franco.

Come on now! This really isn’t a trick. It’s more of a standard at this point!

Since this team does have a very high survival rate, it’s pretty much “go nuts” for all other types. Include any 2 NON Dark heroes of the same type that you want!

This is the same idea as above with the 3 + 2 Heroes Resonance Buff Team but this time you only include 1 more hero of the initial type. Mobile Legends: Adventure gives you a good amount of strategies and tactics with this Resonance Buff by allowing you to include any hero of any other type as your fifth for the team.

Add Valir or Gord to the team. Both of them can add a good amount of ranged destructive power to the mix.

Include Layla or Karrie. Layla is the better choice of the 2 because she can hit multiple targets. Karrie is a good inclusion but is very single targeted in capabilities.

Include Chang’e or Tigreal depending on if you want another front row hero or ranged attacker. Both of them definitely qualify!

Include either Helcurt or Karina. Either one can be a great inclusion. Helcurt can teleport to the back row of your opponent. This helps to disrupt their back row. Karina can turn invulnerable to basic attacks for a while. Basic attacks are what are used the most in Mobile Legends: Adventure.

This is the same idea as the 4 Heroes Resonance Buff Team but you’ll include the fifth hero of the same type. Here’s where Mobile Legends: Adventure managed to reduce the number of strategies and tactics you can employ. You’ll have the largest Resonance Buff power boost in the game. Unfortunately some types don’t have a large mix of heroes to play with!

Lesley + Angela + Lolita + Layla + Karrie or X.Borg depending on which setup you prefer.

Franco + Lancelot + Yi Sun-Shin + Akai + Lapu Lapu or Alucard or Clint depending on which one you have.

Alice + Argus + Moskov + Karina + Helcurt or Bane depending on who you have. Bane can survive a bit better compared to Helcurt. Helcurt can get to the enemy back row which does come in handy.

So now all that’s left for this Mobile Legends: Adventure team guide is that last question. We’re pretty sure this causes a certain amount of confusion here and there! How did we know so much about the heroes when we clearly don’t have them (clearly seen as not obtained in the screen shots)? Then again, you’d also notice by looking at the screen shots that none of the obtained heroes are at level 81 or higher. That level is the main recommendation for all of this. The answer is that you can gain and use a lot of different heroes in the Labyrinth. You’d be amazed at how well built they really are! That and there’s this brand new invention called Mobile Legends: Bang Bang! Yes, we already knew about the heroes anyway!

There you have it! This ends our team guide for Mobile Legends: Adventure. If you have other tips or ideas to build a powerful team in the game, feel free to drop us a line in the comment section!