The most of you reading this probably recognize Moonton as the company that gave you Mobile Legends: Bang Bang, the extremely popular MOBA that has since become a sensation among gamers in multiple countries. Now they’re back with a new RPG for iOS and Android devices called Mobile Legends: Adventure. This is an “idle” RPG with a huge world map and a ton of heroes for you to unlock – we really wouldn’t call it idle in the truest sense (though you can certainly get offline rewards), but we do agree with Moonton’s description of this title as a more relaxing alternative to the original Mobile Legends. There are also various game modes, including some that could allow you to enjoy the same (or at least similar) social gameplay you loved in Mobile Legends: Bang Bang.

As we mentioned above, this new game features dozens of Heroes available to unlock, including all your favorites from the original game. But which of these heroes would be the best ones to add to your team? We’ve done the dirty work and taken the effort to list down most of the top available heroes in terms of rarity, so read on if you need some help in choosing the best characters for your team in this Mobile Legends: Adventure heroes guide. So without further ado, we present you a tier list of the best heroes in Mobile Legends: Adventure!

How To Choose The Best Heroes In Mobile Legends: Adventure

By now, we don’t need to tell you that each team in Mobile Legends: Adventure needs to consist of five Heroes at the very most. But how should you structure your team in the first place? Most players suggest that the best way to go is to have two Tanks, one Support character, and two Mages or Marksmen to do ranged damage, but that’s not necessarily the best setup for all occasions. It will all depend on the situation you’re up against, as well as the Heroes you’ve already unlocked so far. If you don’t have too many Tanks, or happen to have a melee Hero that has fairly high HP and Armor stats, you can replace one of them with a Fighter, for instance – after all, Tanks aren’t necessarily known for offensive firepower, so it makes sense to replace one Tank with a sturdy Fighter if you have one. Similarly, you can replace that one Tank with a third ranged Hero, or ditch the Support Hero in favor of a third Hero who has high ATK stats – preferably, a Mage/Marksman. 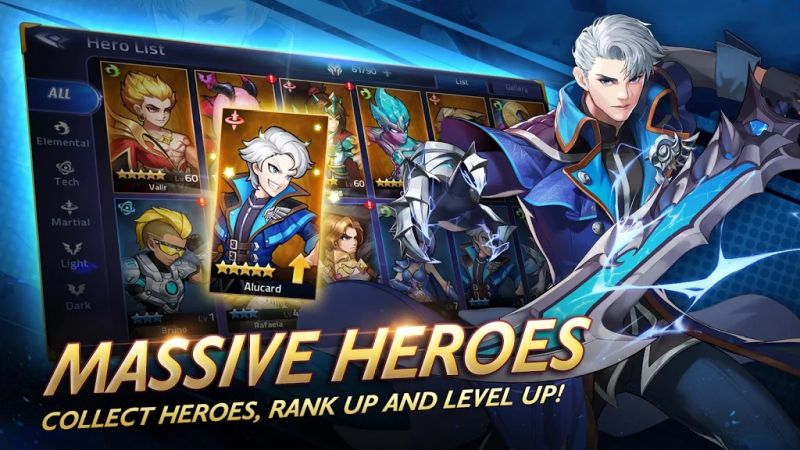 For our Mobile Legends: Adventure tier list, we’re going to stick to Epic Heroes, as these are the ones who could truly benefit you in the long run. As much as you may want to rely on classic mainstays such as Layla, Tigreal, or Cyclops, remember that these are Elite Heroes – second in the three rarity tiers, good for the early stages but limited to a maximum level of 160, as to 500 for Epic Heroes. We’re going to list Heroes based on affinity and recap their Class, Specialty, Skills, and their four basic stats, namely HP (health/hit points), Physical ATK (physical attack), Armor, and Magic RES (magic resistance), and Overall rating at level 500. Take note as well that we’ve left out a few Epic Heroes, namely the ones where their stats aren’t as impressive as another hero of the same class within the same affinity.

We’re basically going to allow you to view the list of heroes below and leave things up to you when it comes to choosing the best heroes in Mobile Legends: Adventure. But to make things easier, we’ve included some comments for our personal best-hero choices (Estes, Clint, Lapu-Lapu, Gatotkaca, Lancelot, and Alice) – we’ve tried to limit our best picks to one or two per class, so here’s hoping you choose wisely!

Comments – Don’t let the mediocre Overall stats deceive you. It’s rare to find Support Heroes that specialize in healing, and you’ll definitely need someone like Estes if you’re in the later stages of ML: Adventure and need an instant (or near-instant) pick-me-up for your team. His first two skills can heal anywhere from one to three enemies (while also healing himself) and also bind him to those allies and increase their Crit Rate. Of course, Estes is also the squishiest Epic Hero in the game, so you’ll want to have at least two good damage-absorbers in your team to minimize the chances of him getting wiped out early!

Skills – Rough Waves (Ultimate, Summons a tsunami that attacks enemies then returns to Kadita, damaging enemies as it moves back to her), Breath of the Ocean (Skill, level 21, marks the target area, allowing an ocean wave to surge after a few seconds, dealing Magic Damage equal to 342 percent of her Magic Power), Ocean Oddity (Skill, level 51, rides on an ocean wave and charges toward distant enemy, quickly acquiring Damage Reduction), Thalassophobia (Passive, level 81, allows her to receive a blessing from the Might of the Ocean, restoring HP equal to 450 percent of her Magic Power, provided her HP is below the 30 percent mark)

Skills – Fist Crack (Ultimate, Burst/AoE, deals out Physical Damage equal to 39 percent of his attack by throwing his fists forward), Qigong Fist (Skill, Burst, level 21, concentrates all the power in his fists to release a wave of the First Wind, launching Physical Damage equal to 305 percent of his Attack to nearest enemy, marking them for 6 seconds), First Break (Skill, Burst/Control, level 51, quickly attacks nearest enemy for four times, dealing Physical Damage worth 90 percent of his Attack on all four instances), Chivalry Fist (Passive, Buff, level 81, increases damage by 20 percent for allies who use the same skill)

Skills – Heartguard (Ultimate, Buff/Blink/Shield, attaches to ally with highest Magic Power for maximum of 12 seconds, protecting her from receiving damage from enemies, while also gaining Magic Power equal to 100 percent of that of the ally and acquiring a Shield equal to 832 percent of her Magic Power), Love Waves (Skill, AoE/Heal, level 21, deals Magic Damage equal to 166 percent of her Magic Power at the closest enemy), Puppet on a String (Skill, Burst/Control, level 51, shoots a puppet string at nearest enemy, deals three times Magic Damage in one second while increasing her Magic Power by 107.33 percent each time), Smart Heart (Passive, level 81, adds 10 percent CD Reduction and 1,200 points of Magic Penetration, stacking a maximum 6 times for each skill released)

Comments – Lancelot is exactly the type of Hero we were referring to when we talked about non-Tanks who could replace the second Tank on your team because of their combination of durability and ATK. As good as his Ultimate skill (Phantom Execution) is, his level-21 Puncture skill makes him even more useful once you level him up to that point – Puncture deals out all the damage you need against those pesky Mages and Support enemies in the back line, and could really turn the tide if you know how to use it at the right time! (Also of note is his passive Soul Cutter skill, which deals extra damage and weakens enemies already hit by Puncture.)

Skills – Howitzer (Ultimate, Burst, gives Clint one grenade for each skill used by allies of the same power, then allows him to throw all the grenades at two of the closest enemies or more, dealing out Physical Damage equal to 386 percent of his attack), Blinding Smoke (Skill, AoE, level 21, throws a Smoke Bomb dealing out Physical Damage worth 246 percent of his Attack), Heel Rope (Skill, Burst/Control, level 51, throws a hunting net at closest enemy and draws it back, dealing Physical Damage equal to 281 percent of his Attack/immobilizing them for 2.5 seconds), Quick Draw (Passive, Level 81, increases Basic ATK damage of allies by 4,000 points)

Comments – Another example of why the raw numbers are not the only thing to consider in ML: Adventure. Clint’s first two skills are deceptively effective and the second one freezes targets temporarily as an added bonus, but it’s his Passive skill that’s truly noteworthy, as it significantly increases his allies’ basic attack stats.

Comments – That skill summary’s quite a long one, but that’s because Lapu-Lapu is notable for being able to switch from one state to another with his first skill, thus varying the effects of his other skills. The bottom line with these skills is that they’re great in dealing out area-of-effect damage and providing crowd control, and that there’s no downside regardless of whether you’re using him in Twin Blade or Heavy Sword State.

Comments – The basic stats may not jump right out of the charts, but in terms of usefulness, you an definitely benefit from a Tank who could do decent damage, especially against middle or back-row enemies. The Unbreakable skill is also handy as well as it serves as a taunt that does decent damage, while his passive Steel Bones skill makes him especially durable once you get him leveled up to 81 or higher.

Skills – King’s Calling (Ultimate, Burst/Shield/Morph, makes a quick charge and summons 4 Royal Guards to join him in battle, with each Royal Guard dealing Physical Damage equal to 167 percent of their enemies), Spear of Glory (Skill, AoE, level 21, stabs enemies with the Spear of Glory, dealing Physical Damage equal to 172 percent of his Attack), Shield Assault (Skill, AoE, level 51, awakens the strength of the Shield, dealing out Physical Damage worth 70 percent of his Attack to first enemy that gets hit, also stunning that target for 2 seconds), All United (Passive, Buff, level 81, adds 18 points of Energy to all allies every 3 seconds as long as he’s on the battlefield)

Comments – You’ll definitely want her on your team to fill your Mage/Marksman, but if you don’t have her on your team by default, you should consider her as a replacement for your second Tank. As you can see, we like Heroes that can do damage against middle or back-line enemies, and Alice is one of them – the Blood Eulogy Ultimate allows her to deal out high-DPS area-of-effect damage after she jumps into the middle of the enemy lineup. As an added bonus, this skill also heals her up a bit on top of all the damage it deals out.

Skills – Eternal Evil (Ultimate, Buff, Argus transforms into a fallen angel, making him immune to death for 6 seconds and transferring 700 percent of damage dealt to his HP after he uses the skill), Demonic Grip (Skill, Burst, level 21, uses his demon hand to target an enemy and deal Physical Damage worth 405 percent of his Attack), Meteoric Sword (Skill, AoE/Buff, level 51, charges up and attacks enemies with sword, dealing Physical Damage equal to 567 percent of his attack/cursing them), Warmonger (Passive, level 81, charges his Magic word each time an ally deals Crit Damage)

Skills – Spear of Destruction (Ultimate, Burst/AoE, stores up energy for a few seconds and releases the Spear of Destruction to deal out Physical Damage that’s 338 percent of his Attack), Abyss Walker (Skill, Buff, level 21, uses power of shadow to dash forward and mark the first enemy he comes in contact with, dealing Physical Damage worth 211 percent of his Attack), Spear of Doom (Skill, Control, level 51, uses his full strength to strke an enemy hero, dealing damage equal to 147 percent of his Attack with additional knockback effect), Spear of Quiescence (Passive, Buff, level 81, allows his Basic Attacks to penetrate through target)

Skills – Shadow Rush (Ultimate, rushes toward enemies with lowest HP, dealing Magic Damage worth 884 percent of her Magic Power), Elusiveness (Skill, Buff, level 21, enters Elusiveness State for 6 second, making her immune to all enemy Basic Attacks, also turning her next Basic Attack into a critical one), Dance of Death (Skill, AoE, level 51, uses her double blades to deal Magic Damage equal to 222 percent of her Magic Power to surrounding enemies), Combo Hit (Passive, level 81, allows her to do True Damage equal to 30 percent of a target enemy’s lost HP)