If you are an idle game fan and you haven’t heard of Ulala: Idle Adventure yet, then you must have been living in a cave in the last few months. This exciting idle adventure game for Android and iOS puts you in the shoes of a caveman who must work with others in order to take down giant monsters. Travel across different regions of each continent in search of food, loot, and treasure! Dozens of bosses will be waiting for you in each area, so make sure you are prepared.

You can level up your character, upgrade your skills, catch better pets, and even craft legendary equipment. That won’t be enough for advanced stages, though. You need every bit of additional strength you can get if you are to conquer the entire continent. That is where tempering comes in.

Tempering gives you a massive boost in specific stats, allowing you to customize the bonus according to your needs. While the game does a great job of leaving detailed explanation for most features, that paper icon is curiously absent from the Tempering section. Luckily for you, our Ulala: Idle Adventure tempering guide is here to save the day!

1. How To Unlock Tempering In Ulala: Idle Adventure

Unlike most other features that are locked behind a level requirement in Ulala: Idle Adventure, Tempering is unlocked through gear Enhancement. The first Temper entry is unlocked when a piece of equipment reaches Enhancement level 39. That means you need to know how to enhance your equipment first before you can even try to Temper anything. 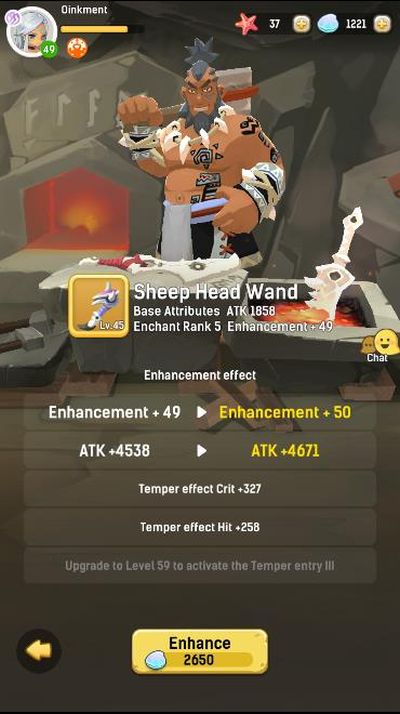 Enhancement is easy enough to learn. You just head over to the Character screen, tap on the gear you want to enhance, then tap on the Enhance button at the bottom of the window. You can then spend Shells to Enhance your chosen equipment. Keep in mind, however, that the Enhancement level cannot exceed your character’s level. That means you don’t get to Temper anything if your character is level 38 or lower.

After you reach Enhancement level 25, you will need to Enchant your gear to enhance further. Enchantment is done on the same screen, but you will need to have the required Enchantment item. The only place you can get Enchantment items is in the Mystic Cave. Make sure your team is strong enough to take this on. You can get up to 12 challenge chances in the Mystic Cave, so you can keep trying throughout the day until you succeed. If you are struggling to win in the cave, you may need to power up first. Check out our Ulala: Idle Adventure beginner’s guide to see if you got all your basics covered.

Once a gear reaches Enhancement level 39, Tempering will be unlocked, but for that specific gear slot only. You will need to enhance each slot in order to unlock Tempering for all of them. To access the Tempering screen, just tap on the equipment you want to temper, then tap on the Temper button at the bottom of the window.

3. Re-Roll To The Stats You Need

Each Temper entry can be re-rolled to a random new stat. Since you won’t always get the stat that you like, you should re-roll as soon as you can afford to. Re-rolls cost 20 Starfish or Pearls depending on what you have. There is no limit to the number of re-rolls, so you can keep trying until you are satisfied. Don’t worry if you have already started Tempering before reading this guide. Re-rolling will not affect your progress on the bar. 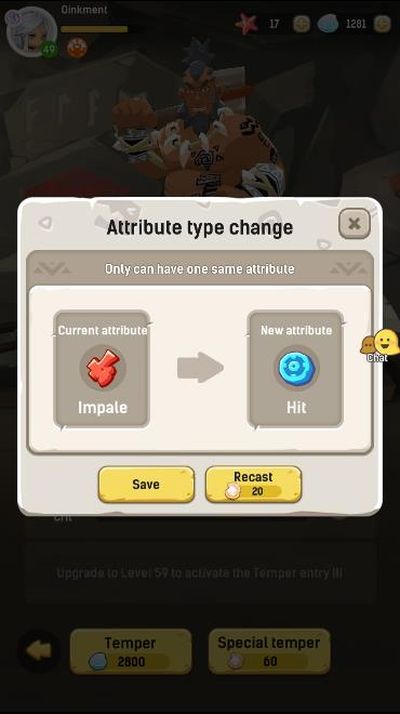 If you are wondering which stats are good to have in the Tempering screen, that depends on your class. For DPS and Healer classes, you would want to go with ATK, Crit, and HP for the three entries. ATK and Crit scale well for both DPS and Healer skills and HP is a good stat to have in general. For tank classes, you would want to have HP, Armor, then Block. You can switch out Block for Tenacity if you are prioritizing PVP, though.

When you start Tempering, you will see a bar for each entry. The bar fills up as you Temper, and once it is full, you cannot Temper anymore. Raising the Temper Rank of a gear slot will increase the maximum possible bonus you can get from each entry. It will cost you 30 Starfish or Pearls to increase Temper rank. 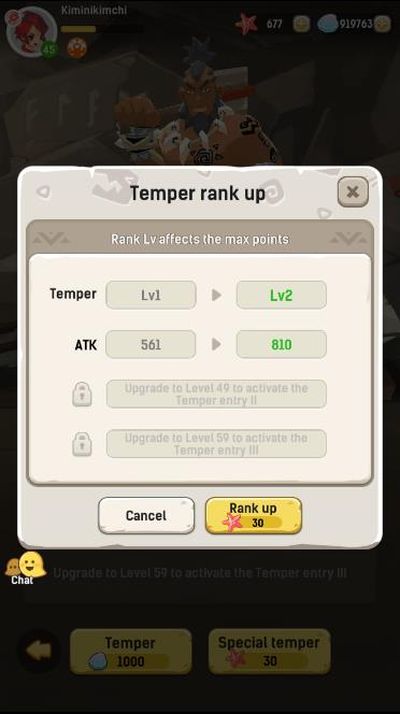 As you Temper a gear slot, you will notice the label on each entry change. This label is the Temper Tier. It starts off with Sub, the lowest level. Whenever you reach a certain milestone in the Temper entry bar, you will reach a new Tier. After the Sub Tier, you get Elementary, Intermediate, Advanced, and Premium. This is important because with each new Tier, the RNG changes, and the chances of success go down. By the time you hit Premium, the chances of successfully tempering will be so low that you will most likely see negatives most of the time.

6. When To Use Special Temper

Special Temper is the type of Temper that uses premium currency instead of Shells. It has a much higher success rate even when you hit Premium Tier. Unfortunately, you won’t have a large supply of premium currency unless you want to spend inordinate amounts of real money on the game. It would be a good idea to hold on to all your Starfish in order to have enough for Tempering in advanced levels. 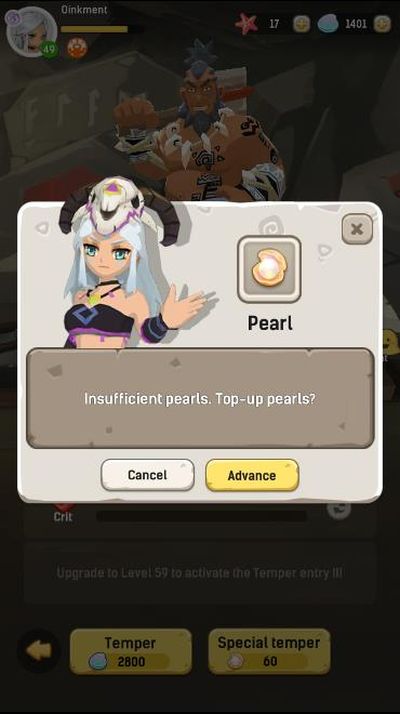 When you get your first Temper entry, you would probably think it’s pretty easy. You confirm when you get a positive result, then cancel when you get a negative. You can just keep trying until you eventually fill up the entire bar. Then the second entry comes along and you realize it was all a trap that has been waiting for you since you hit Enhancement level 39.

Each Temper entry has an independent RNG for improvement. That means you can get a positive result for one bar, then a negative on the other. If you raised your first bar to Advanced or Premium before you get the second bar, you will be spending a lot of Shells trying to get both bars to give you a positive result.

Once you have all the bars to Intermediate, you can start pushing your Tempering to higher levels until you get to Premium. Then use the Starfish you stocked up to get everything maxed out. Of course, since the developers are planning to add a fourth Temper entry, you may want to hold off until they do.

An alternative strategy is to avoid increasing your Temper rank. When a bar is maxed out, it no longer changes with subsequent Temper attempts. That means it will get a +0 regardless of the result of other bars. Just max out each bar as you unlock it. Then once you have all bars maxed out, increase your Temper rank. Since you will have all three bars at same level, you will be expecting similar RNG for the three of them. This strategy costs more Shells since you will still be spending three bars’ worth of Shells even if the maxed-out bars aren’t moving. The benefit of this is that you get to enjoy the higher stat bonuses sooner instead of waiting for the other bars first.

You now know everything you need to learn about Tempering your gear. Follow our Ulala: Idle Adventure tempering guide above and you will be powering up with ease! In case you have additional tips or tricks regarding tempering in the game, feel free to drop us a line!

Can you have the same temper bonus two times on the same item?