Disney characters are loved all across the globe and we all enjoy following them on their adventures. Well, Gameloft has prepared another exciting journey, and three princesses are waiting for you in Disney Princess Majestic Quest. As the title says, this mobile game will take you into the world of magic and beauty. The game is available for iOS and Android devices, and the colorful graphics will blow your mind.

Disney Princess Majestic Quest combines an exciting storyline with a puzzle-matching board. In other words, you will be matching the same-colored gems to help the princesses. Yet, the puzzles will become more and more challenging as you progress through the levels. Therefore, let’s take a look at our Disney Princess Majestic Quest beginner’s guide, as it comes with a number of useful tips, cheats and strategies for those starting out in the game. Hopefully, our compilation of tips and tricks will make the tasks easy to complete. As a result, the game will be more enjoyable as well.

1. Earn Stars To Complete The Objectives And Tasks

The story of Disney Princess Majestic Quest revolves around the three charming young ladies – Ariel, Belle, and Jasmine. As it happens, all of them are facing the same problem – a magic storm has hit the realm and ruined their kingdoms. So, the ladies are trying to repair the damage and restore order. 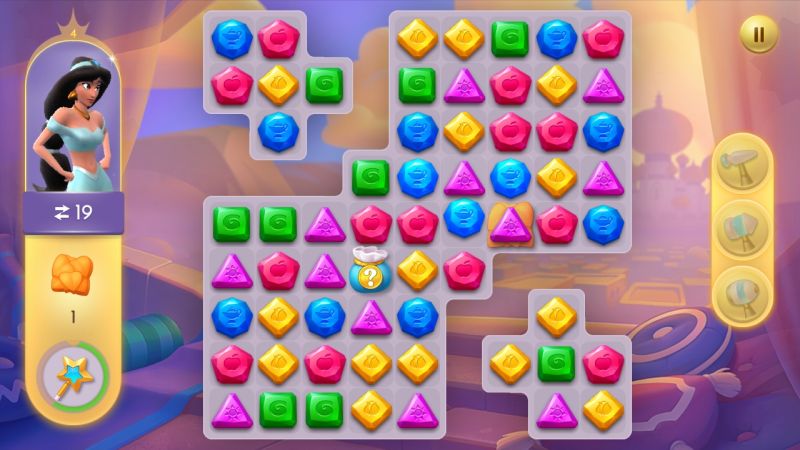 That’s where you step onto the scene. Your task will be to help the princesses in their efforts to rebuild the palaces and halls. To do so, you will need a certain number of stars. The golden stars are one of the in-game currencies, and they play a vital role in Disney Princess Majestic Quest. To clarify, the stars help you complete the objectives and the only way to obtain the stars is by playing the puzzle games.

2. Use The Keys To Unlock New Locations

As we said, the three princesses will have their own wondrous kingdoms. Ariel will be spending most of the time with her dad King Triton underseas. Belle will stay with the Beast, while Jasmine and Aladdin will try to renovate their own palace. These three locations will be available to players of Disney Princess Majestic Quest, and some more will arrive soon. 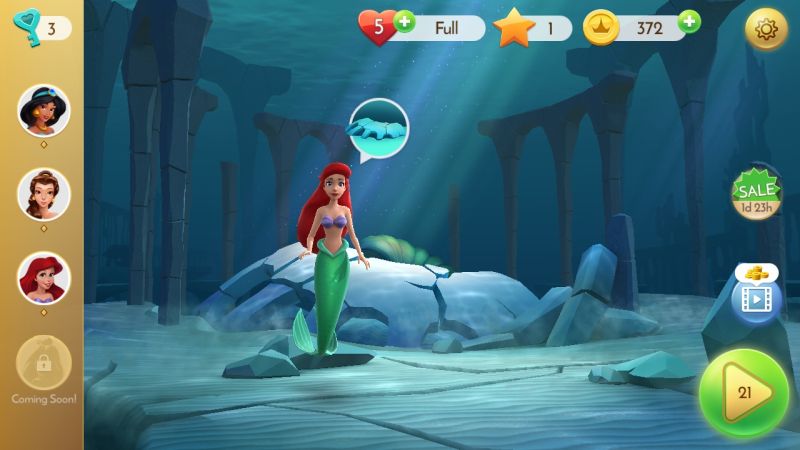 Yet, not all of them will be unlocked at the start of the game. In fact, you will start the story in Jasmine’s kingdom, helping her to bring back peace to the realm. As you play puzzle games, you will receive golden stars. On top of that, you will also receive valuable keys, which will help you unlock new locations and parts of the story.

3. Play The Campaign Or Go Straight To The Puzzles

Once you unlock all three locations, you will be allowed to move through them as you like. In other words, you can complete one task for Ariel and then go help Belle at her castle. Either way, you will need to earn stars by matching the gems on the puzzle board. The Campaign with the objectives is located on the left-hand side of the lobby screen.

Yet, there is another way of playing Disney Princess Majestic Quest. In the bottom right corner, a green arrow can take you directly to the puzzle-playing area. To be precise, you will jump right into the next level that needs to be cleared. Of course, you will be rewarded for each successful task and you can spend the gold completing the objectives in the Campaign mode.

4. Pay Attention To The Number Of Moves Left

When playing Disney Princess Majestic Quest, the goal will be to solve the tasks by matching the puzzles. In the case of this game, the puzzles will be in the shape of colorful gems. By matching three or more of those precious stones, you will make them disappear. As a result, the others will fall into the empty spaces, creating more combinations and boosting your score. 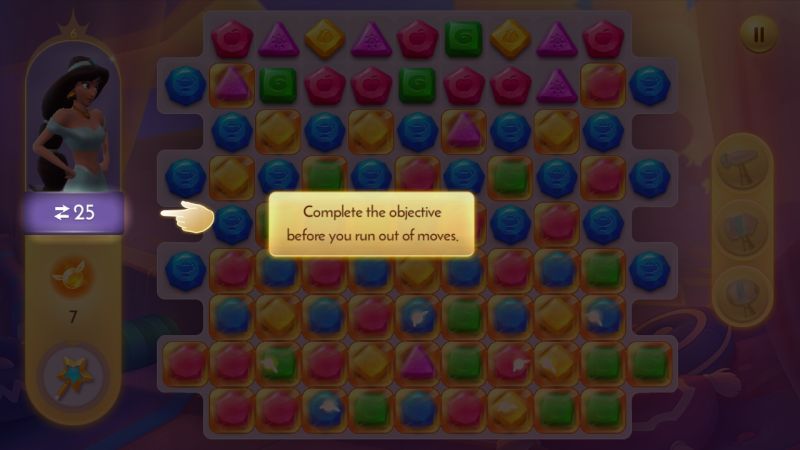 Yet, the number of moves you can make will be limited. To clarify, the number on the left-hand side will indicate how many moves you have left. So, always keep an eye on this valuable piece of information and adjust your strategy accordingly.

Needless to say, some missions will be more demanding than others. In fact, sometimes you will fail in completing the task within the available number of moves. For instance, in some cases, you will be one move short from completing the puzzle and solving the mission. It goes without saying that such moments can be frustrating and they could cause a headache or two.

But don’t throw your phone against the wall just yet! The game offers a convenient solution to this problem. If you run out of moves and the task is not completed, you can buy extra moves. Of course, you will need coins to make the purchase. Therefore, try to collect as many coins as possible and have them ready for these situations. Also, the players can buy lives, which are needed for playing the game in the first place.

6. Match The Gems In Quick Succession To Fill Up The Wand

As we said, magic powers are an integral part of the activities and events in Disney Princess Majestic Quest. Thus, it comes as no surprise to see a magic meter in the bottom left corner of the screen. Also known as the Wand, this gauge can be a helpful tool and you should make the most of it. 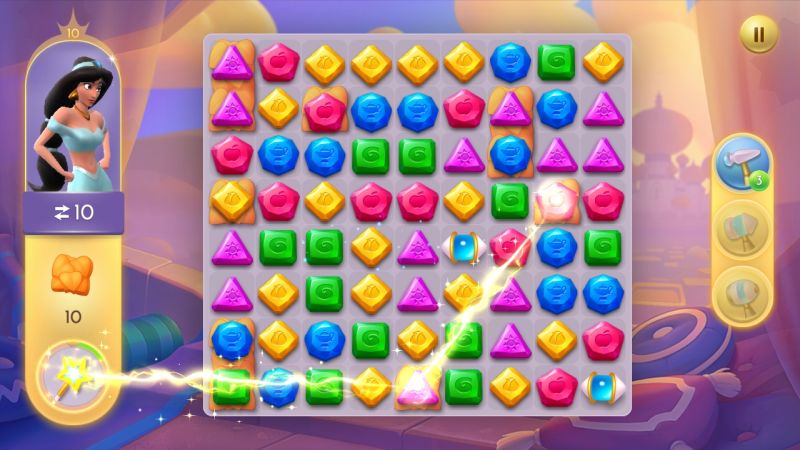 The gauge at the Wand is filled by matching the gems. To be precise, the more gems you match in a short span, the more energy will go to the gauge. Once the Wand is full, a magical beam of light will travel across the playing field. On its way, the beam will clear out the obstacles and collect the gems that are needed for completing the task.

7. Use Power-Ups And Boosters To Complete The Objectives

Every stage in Disney Princess Majestic Quest will present you with a different task. Sometimes you will have to free the fairies. On other occasions, your task will be to spread the royal mat across the entire playing field. Either way, the missions will challenge you to the core, and you will need all the help you can get.

For that reason, we recommend using boosters and power-ups. In the upcoming chapters, we will elaborate more on the features of every power-up in the game. For now, it is important to learn that you can activate the boosters by double-tapping on them. Or, you can swap their positions to activate their magic powers.

8. Activate The Flare To Clear Out An Entire Row Or Column

The first available power up when playing Disney Princess Majestic Quest will be the Flare. By matching four gems in a line, you will create this mini-rocket. After that, you can activate the booster by double-tapping on the icon. On top of that, the Flare works in both directions. In other words, the players can clear out the gems located along the vertical or horizontal axis. 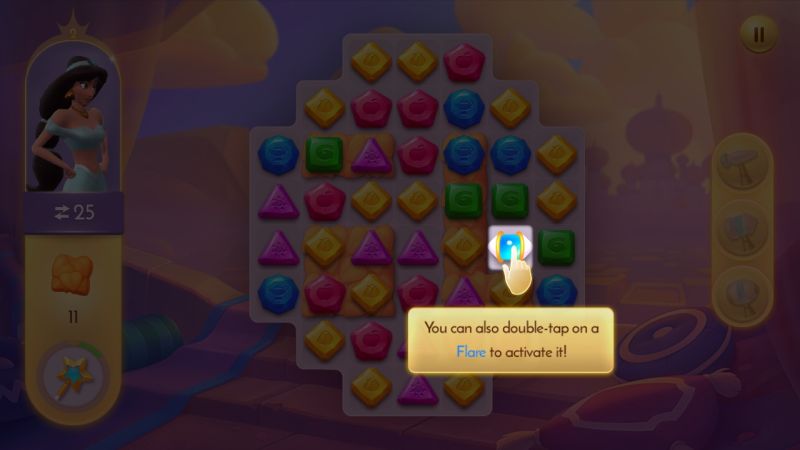 The Flare may not be the most powerful booster in the game. Even so, this rocket can affect the position of other gems, shifting them down and rearranging the playing board. So, don’t hesitate to use it whenever you get the chance.

9. Activate The Bomb To Clear Out Big Sections

The next power-up you will unlock in the game is called the Blast. As the name suggests, this booster will cause a blast on the playing field. In fact, this power-up is nothing more than a good old bomb. Needless to say, once you double-tap on the bomb, the detonation will wipe out large chunks of playing field.

10. Use The Butterflies To Target Specific Gems

In some cases, the game will require that you destroy hard-to-reach gems. More often than not, those tiles will be located around the edges of the playing field. Well, the ‘cure’ for those situations hides in the next power-up we will present. This booster is known as the Wings, but the shape and the features of the power-up resemble a butterfly. 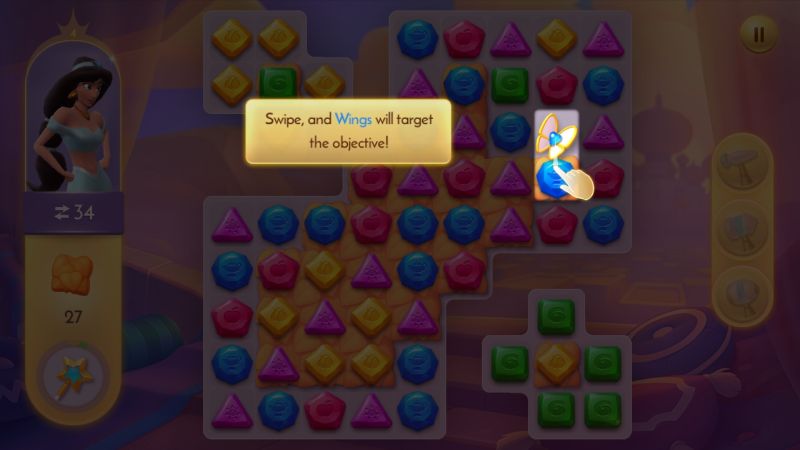 Either way, players can create this booster by matching four gems in a square formation. So, whenever you create a square – a pair of wings will appear on the puzzle board. After that, you can either swap the tile with another gem or you double-click on the booster. No matter how you activate the Wings, the result will be the same – the butterfly will fly across the tiles and eliminate the ones that need to go.

The next power-up on this list is the most powerful booster in the game. As such, you should maximize its potential when playing Disney Princess Majestic Quest. The magic power of the so-called Tonic is to eliminate tiles of the same color. So, if you activate the Tonic and click on a red gem, all the other red precious stones will also disappear from the playing area.

The Tonic can have a massive impact on the situation in the field if you use it properly. In other words, it is important to activate power-ups in a strategic manner. For instance, you should trigger the Tonic when you have a lot of gems of a certain color available on the tiles.

The puzzle board in Disney Princess Majestic Quest will grow as you climb the ranks. In other words, more and more gems will appear on the screen. In a way, this will provide players with more options for matching the precious stones. On the other hand, more cells will mean that you need to get more work done to complete the tasks. 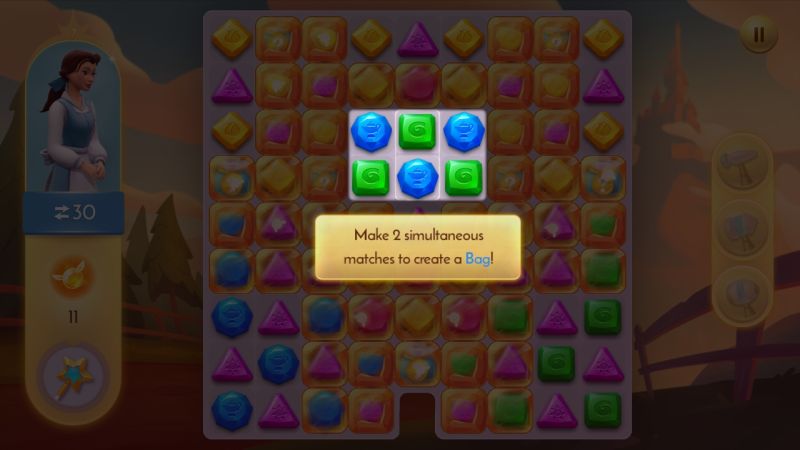 For instance, if you align two sets of three same-colored gems, you can create a Bonus Bag. To clarify, you need three green gems and three yellow ones, side by side. Once you activate them, a mysterious bag will land in their place. Well, the bag is nothing but a new power-up, but you will have to click on it to reveal its type.

As you can see by now, the boosters are an important element of the game. They play a key role in destroying the gems and completing the tasks within the available number of moves. Also, you could notice that some power-up are more effective than others. Well, there is a secret way of making the boosters even more efficient.

The so-called Combo attacks are a force to be reckoned with, and you should use them at every opportunity. In short, they work by activating two power-ups in adjacent cells. After that, both boosters will wreak havoc on the playing field. Moreover, their powers will be increased, which will result in total mayhem on the board. In the end, not many cells will survive the combo attack.

14. Use The Tools On The Right-Hand Side

Besides all the power-ups you can create by matching a certain number of gems, other tools can also help with destroying the tiles. Those tools are located on the right-hand side of the playing screen and may take a while before you unlock all of them. For example, the Mallet is the first one to become available and you will have to reach level 15 to unlock it. 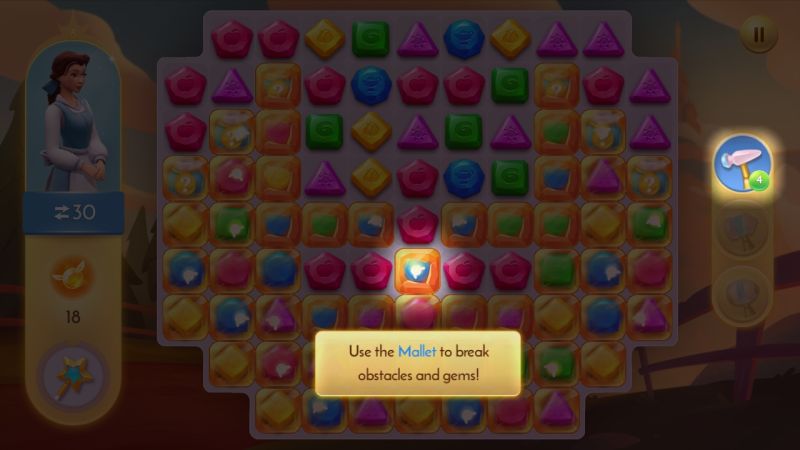 But your efforts will not be in vain. These tools are convenient and effective, helping you complete even the most demanding of tasks. For instance, Mallet can take out individual cells. However, these tools also come with a limited number of times you can use them.

With the final tip, we put a wrap on our list of Disney Princess Majestic Quest tips, cheats and strategies. Hopefully, these strategies will help you progress through the game with ease. Even so, we are always open to suggestions. So, please leave us a comment if you know of any other useful tip or trick for the game. 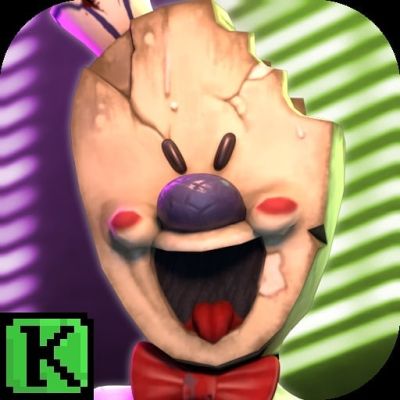 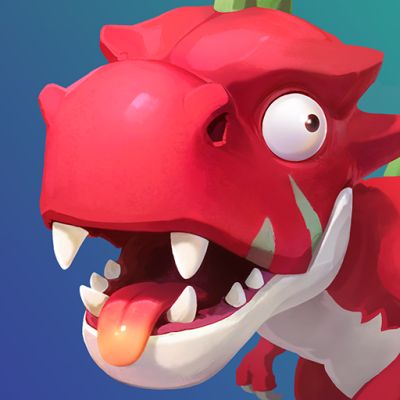 Next
Ulala: Idle Adventure Tempering Guide: How to Temper Your Gear
Click here to cancel reply.