Any walkthrough guide about a Spongebob game has to begin with: Arrrr you ready, kids? Spongebob: Krusty Cook-Off is another one of developer Tilting Point’s big-brand titles and it’s an exciting simulation game. Alongside titles such as Horse Racing Manager 2018 and Star Trek Timelines, nautical nonsense will be something you wish as Spongebob: Krusty Cook-Off lets you play as the best and giggliest fry-cook in Bikini Bottom.

This Diner Dash-esque game tasks players with assembling and pushing out increasingly complicated pancake, barbecue and of course, Krabby Patty orders for the burger-loving residents of Bikini Bottom. It also includes cameos from your favorite characters from the show! Once in a while Patrick will come by and take forever to decide what to eat, Sandy will say she’ll have anything, and Pearl is just a tad bit impatient with her food order, because, well, her father owns the joint. 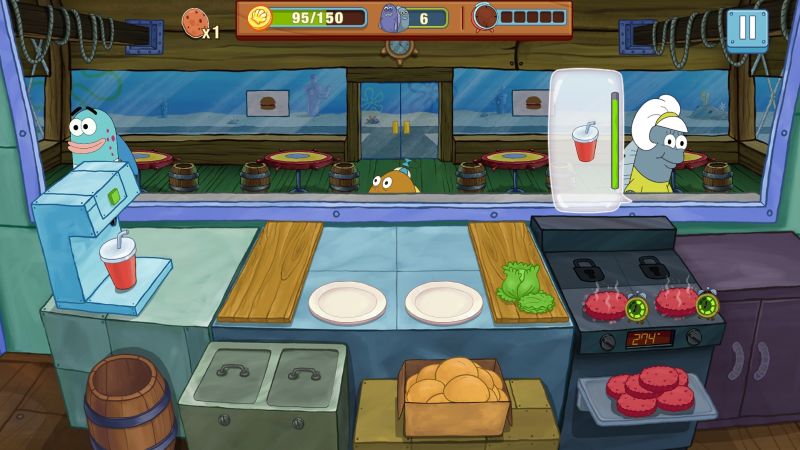 How cooking actually happens underwater is beyond me, but it’s definitely a lot of fun.

This isn’t to say, however, that the game is anywhere near a rip-off of Diner Dash. Spongebob: Krusty Cook-Off is a strong title on its own: smooth (and just downright adorable) graphics, a surprisingly complex and exciting kitchen upgrade system, and just enough power-ups and boosters that can help you maintain order in the chaotic world of underwater fast food.

The game happens in episodes, starting with The Pancake Stand that Spongebob built right outside his pineapple under the sea. Each new episode unlocks a new kitchen to work with: The Pancake Stand, The Krusty Krab (my personal favorite), Sandy’s BBQ, and eventually Goo Lagoon–which is another area with a lot more restaurants! Now that’s a lot of content in a single mobile game!

1. Understanding The Currency Of The Game

Looking at the main menu of Spongebob: Krusty Cook-Off, it can be slightly overwhelming to see so many numbers on the screen. While the game does its best to explain each and every currency, some things just don’t become relevant until you’re in the thick of it. Here’s a quick reference:

Top section of the menu, from left to right you have lives available, fame (or pearls), coins, and gems.

Lives available: this indicates how many tries you can have with a level. This number goes down per failed level, but also replenishes 1 life every 30 minutes, with a maximum of 5 lives available. Once you’ve run out of lives, you can wait, watch ads to get one life, request lives from friends by connecting the app to your Facebook account or just straight-up purchase more lives.

Fame (or pearls): this is more of a scoreboard than a currency. You can increase your number of pearls by making upgrades to the décor of your restaurant. This will lead to in-game rewards.

Coins: these are used to purchase kitchen upgrades, décor and interior fixtures of the restaurant. You can earn coins simply by playing the game or purchasing them with real money.

Gems: this is the rarest currency of the game. Gems are used most importantly for kitchen upgrades in the game, and they can only be earned a few at a time. You can earn gems from daily rewards, hitting certain achievement thresholds (explained later), and watching ads within the game.

2. Hit The Ground Running With Every Level

Whenever you begin a service in Spongebob: Krusty Cook-Off, you’ll want to get items on the grill right away. As soon as a level starts, slap on some batter on the grill, and you’ll be ready right away to serve the first batch of orders.

3. Don’t Do Orders On A Per-Item Basis

This takes some time getting used to. When customers come by in quick succession, it’s easy to get overwhelmed by getting their orders right. Let’s take the Pancake Stand for example as this will be the starting point of the game. 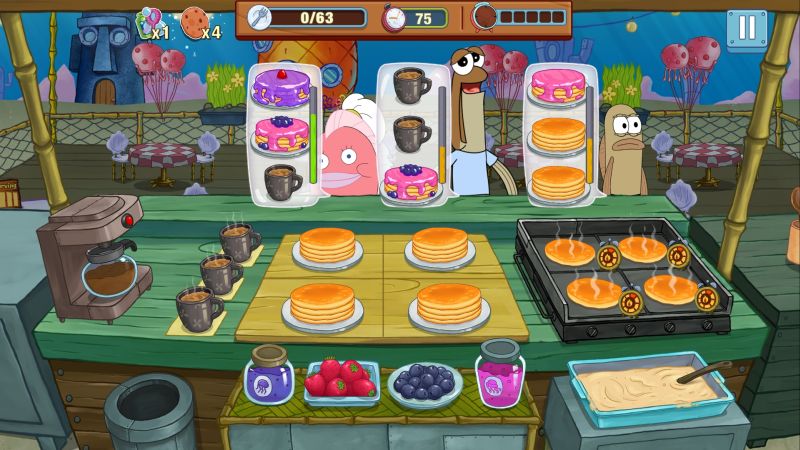 Make sure to push out orders in quick succession in order to progress faster in the game.

In this situation, the reflexive thing to do would be to work on the pancake orders one at a time, tapping the jam, adding the toppings then sending them out one by one. A more efficient way to push out the orders would be to count how many pancakes need pink jam and purple jelly then tapping the jars accordingly. In this case, it would be three for pink and one for purple, then add the toppings: two blueberries and one strawberry. You will find that with practice this will allow you to push out more orders in quick succession, making you progress much faster in the game.

Bonus tip: Use cooking time to your advantage! The best way to win at this game is to not panic. While the orders are cooking on the grill, you can plan out how to push out orders in the most efficient way possible.

4. After Every Fry, Start Cooking Again

This should eventually become a reflex as you play Spongebob: Krusty Cook-Off. Once you’ve plated the pancakes or put the Krabby Patties in their buns, slap some more on the grill right away. This will allow you to always be ready for a bunch of new orders should they come in. Just mind the grill so nothing gets burned! 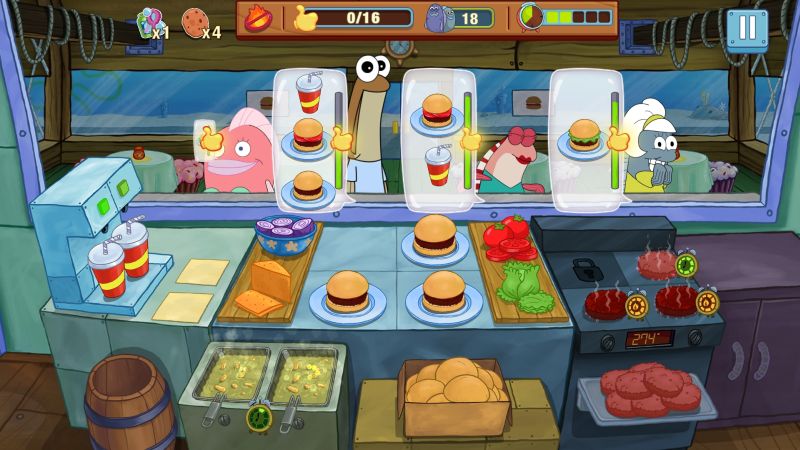 Something good is always cooking at the Krusty Krab! Put some patties on the grill so they can cook while you handle the orders you can assemble right away. Don’t forget to deep fry the fries, too!

5. Upgrade The Kitchen When You Hit A Snag In The Game

Kitchen upgrading in Spongebob: Krusty Cook-Off is probably one of its most interesting mechanics. Upgrading the kitchen to have more fryers, better grills, more plates and even upgrading the ingredients will allow you to push orders faster and make more coins! It is basically impossible to progress in this game without upgrading the kitchen, so spend those gems you earn sparingly! 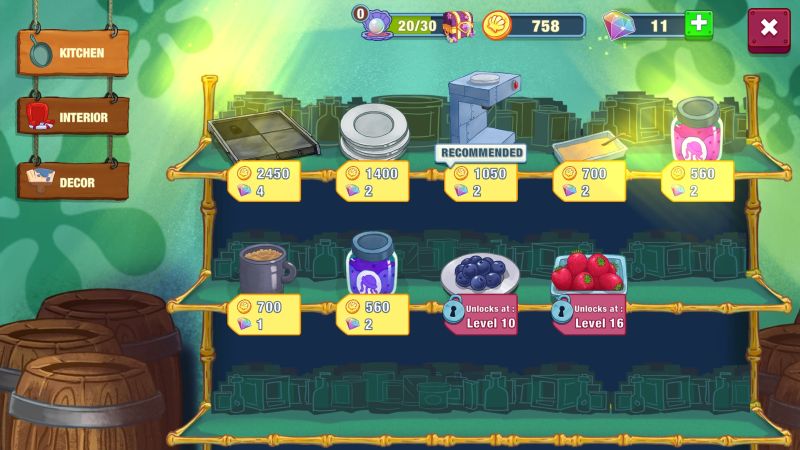 In this screen you can upgrade the current kitchen according to your needs. Use the coins and the gems you have earned to purchase these upgrades.

If you notice that customers are ordering more and more items per level, you’ll want to get upgraded grills and plates. If you fall short of certain coin goals in a level, you will want to upgrade the jars, toppings and batter (for the Pancake Stand) as these increase your profit margin for that kitchen indefinitely.

Bonus tip: The “recommended” kitchen upgrade doesn’t always coincide with the goals for each service in the game. You will want to prioritize plates and grill upgrades, followed swiftly by drink upgrades (as drinks are the easiest to push out).

You will need to collect both coins and gems to be able to upgrade your Bikini Bottom kitchens, and for that you will want to make sure that you claim the rewards that the game gives you for completing certain achievements. 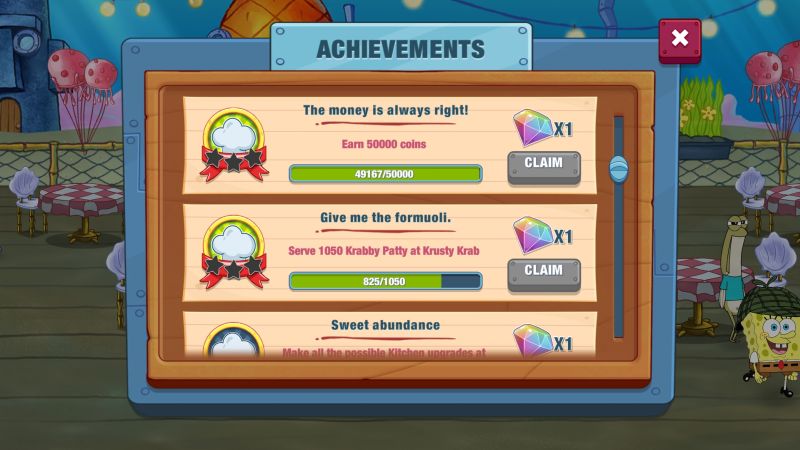 The Achievements screen will tell you what you need to accomplish in order to earn more gems without having to purchase them in-game with real money.

In addition, there are also daily rewards which give players tons of useful items just for playing the game every day.

7. Mind The Goals For Every Level 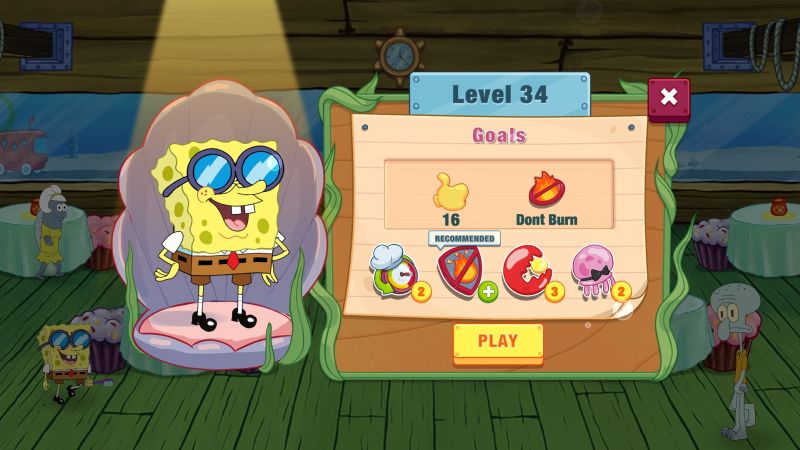 In this dining service, you’re asked to get 16 thumbs ups and to not burn any item. A “thumbs up” is when you push an order out to a customer while their waiting meter is still green.

Keeping the goals of every level in the game in mind leads us to our next tip.

At any point within a level, players can use cookies and/or bubbles. These are used to placate angry customers, giving you more time to complete their orders. Use these sparingly, and perhaps when the goal of the level are thumbs ups, as cookies and bubbles get the customer waiting meter back up to green. 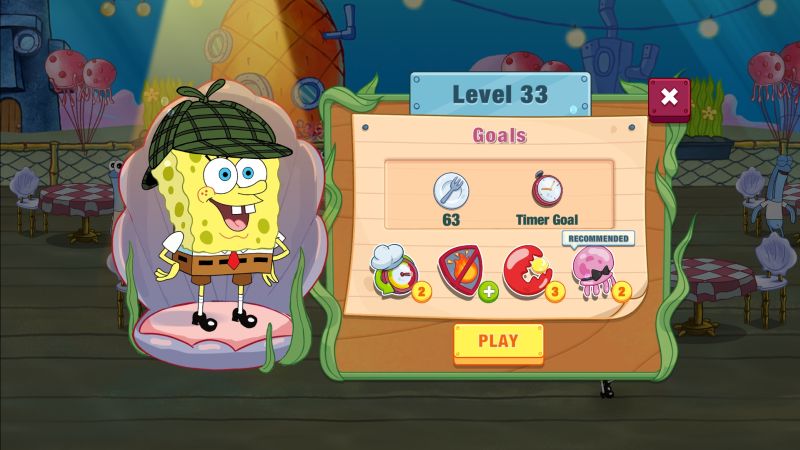 Since the goal of this level is to serve 63 customers, the player shouldn’t have to use the increased prices booster, and should instead try the recommended jellyfish waiter booster. This will allow the player to focus on assembling orders rather than pushing them out.

Boosters are offered to the player right before beginning a level. Each booster has its own perk: orders can be cooked instantly, nothing gets burned, food prices increase dramatically, and a jellyfish waiter can take the orders straight to the customers as they’re completed. Use these only when you can’t get past a certain level on your own.

9. Go Back To The Previous Episode If You’re Stuck On A Level

Unlocking new episodes doesn’t take away the previous episode. You can still work in and upgrade the Krusty Krab kitchen even if you’ve already unlocked Sandy’s BBQ. This means that if you’re finding it hard to progress in a certain episode because you can’t upgrade your kitchen, you can go back to your previous kitchen, make more coins and earn more gems to do just that. 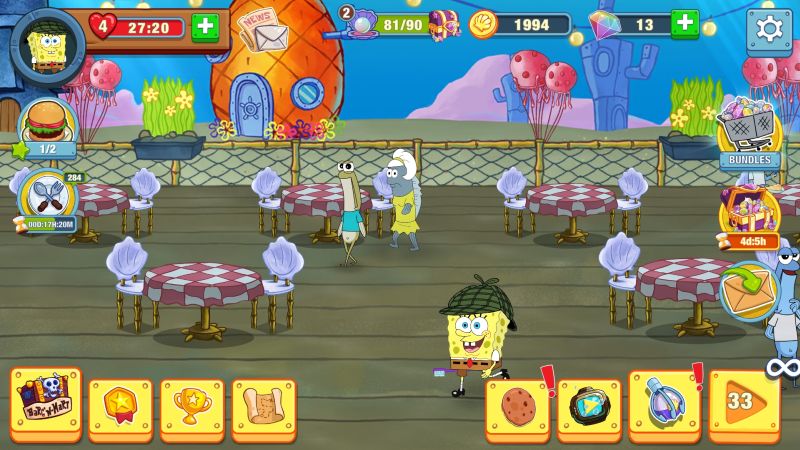 Kitchen levels go on forever even after you have unlocked the next episode.

10. Change The Décor Of The Restaurant

Restaurants aren’t all just about the kitchen after all! In the upgrade menu, you can spruce up the front of the house, too! Change up the chairs, the tables, and even add jellyfish balloons! These little changes not only help you customize the look of your restaurant, but also help you earn more rewards! 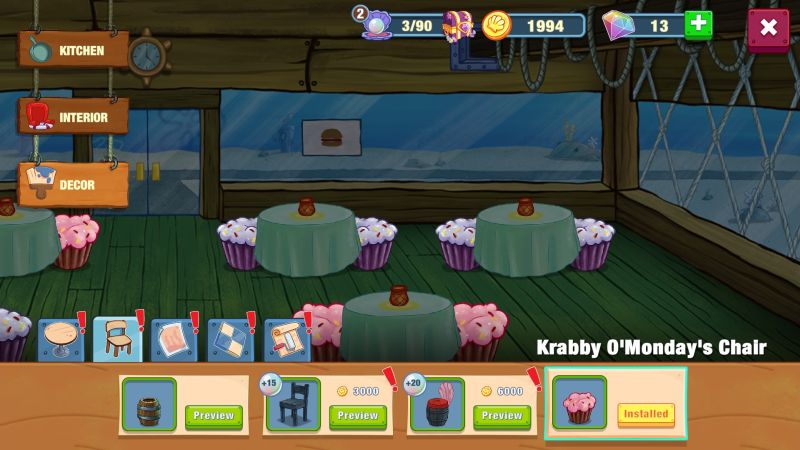 Yes, I changed the Krusty Krab seats to cupcakes. They’re cute. And they add pearls!

Any décor upgrade gives the player pearls. Get enough pearls and you get rewards in the form of coins, gems or maybe even boosters!

11. You Can Change Character Outfits

This might not count exactly as a tip to play the game better, but it certainly does make the game a bit more fun. You can change the outfits of characters from the show, and when they appear on your screen, whether it’s just walking around the Krusty Krab or making an actual order within a Sandy’s BBQ level, they’ll be wearing the outfit you pick for them. 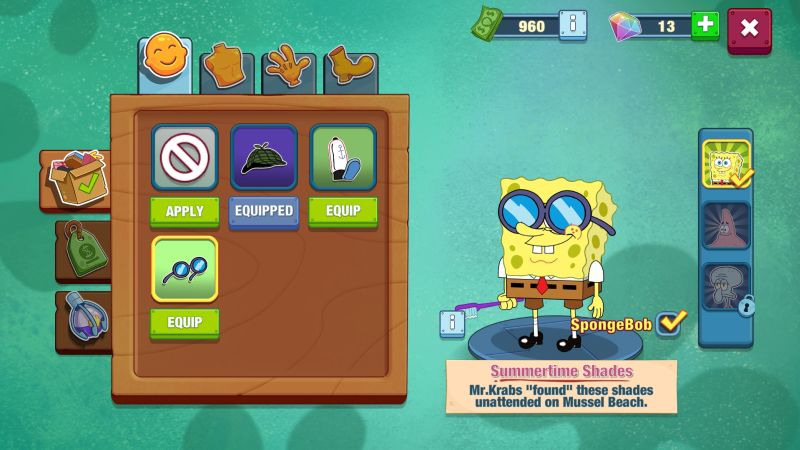 Players can edit character outfits and accessories on this screen. Give Spongebob a pair of glasses, hats and unlock more options as you progress through the game.

You can unlock more clothing options if you use Skill Crane Loot at least once a day. Alternatively, you can also use gems to purchase more Skill Crane games though it’s recommended to save your gems for kitchen upgrades instead. Another kind of in-game currency not previously discussed is called Krab Dollars. You can use Krab Dollars to purchase specific items of clothing for your characters.

Despite what the comments section of the Play Store would have you believe, Spongebob: Krusty Cook-Off is both playable and enjoyable without having to spend real money to get in-game items like gems and boosters. All you have to do is stay calm during levels, try not to get overwhelmed by a seemingly impossible amount of complicated food orders, upgrade your kitchen regularly, and be stingy with your resources.

If you have any other tips or tricks for the game that you would like to share with us, feel free to drop us a line in the comments below! 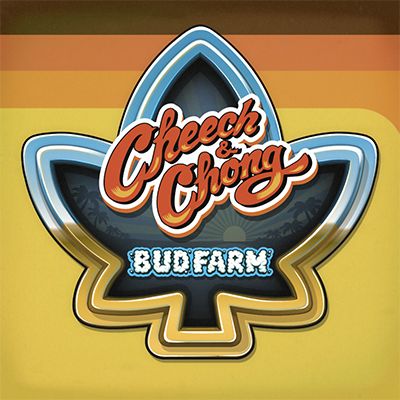 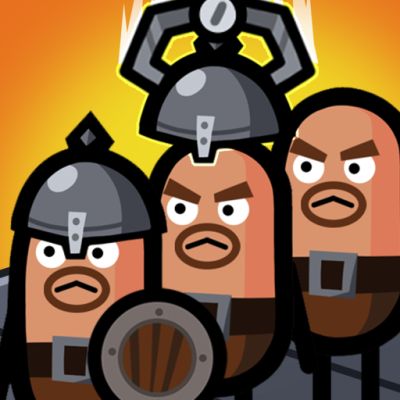