With a current app portfolio consisting of 19 games, Homa Games has already amassed an aggregate amount of more than 100 million downloads over all of its published titles on the Google Play Store. Sky Roller, Idle Landmark Tycoon, and Idle World! are the company’s most popular apps right now with the first one banking well over 50 million downloads.

NERF Epic Pranks! Is a brand new casual action title from Homa Games, which follows the tried and tested formula that has led to the success of the company’s previous releases. If you are a kid or a kid at heart and have not played with and enjoyed NERF blasters before, at the very least you have heard of it and am aware of how popular their toyline is. Tagging people regardless of whether or not they are “armed” makes for some pure, harmless fun.

Although the actual games or pranks you can do in real life cannot be entirely replicated in a mobile game, NERF Epic Pranks! has captured the fun and excitement that comes with shooting at unsuspecting people as well as hiding from them. If you love NERF blasters or enjoy casual action games that test your timing and patience, then you should give NERF Epic Pranks! a try! 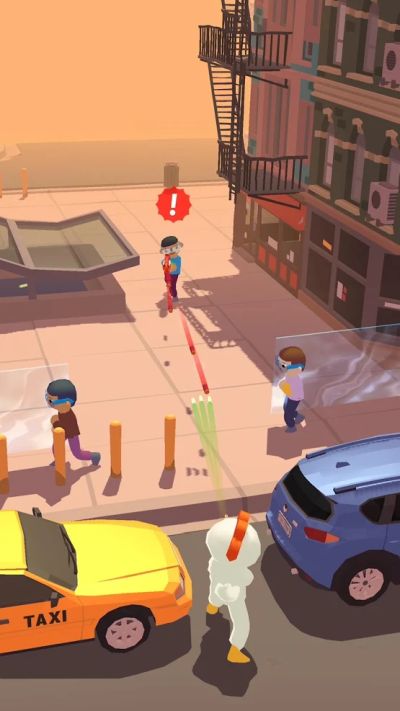 Given that NERF Epic Pranks! is based off a toyline that is suggested for 8 years old and above, there is already a strong presumption that the mobile game itself is suitable only to youngsters. As simple and easy as it may look, NERF Epic Pranks! can actually present some challenges fit for players of all ages.

The game provides the simplest of controls and mechanics as well. You can tap and hold on the screen to start blasting away at your target, and release your hold to stop shooting and take cover. There is auto aim, unlimited ammo, and no reloads so you basically have to worry about being seen and caught by your targets.

NERF Epic Pranks! is actually easy to pick up and play but if you found yourself stuck in a particular level or are looking for faster and more efficient ways to boost your progression and collect everything, then you should read our detailed NERF Epic Pranks! guide below. We have included a number of useful tips, cheats and strategies in this NERF Epic Pranks! guide to help you complete each level and dominate the game!

1. You Can Stay In Cover For As Long As You Want

Many games, especially those that fall within the action, puzzle, and arcade genres tend to project a sense of urgency in the completion of its levels. For some, there are evident time constraints to pour on the pressure. For others, a certain length of inactivity will eventually lead to more problems for the players. While these mechanics often push players into rushing in and making mistakes, in most cases the mere presumption of having a need to speed things up is enough to rile up people, especially beginners.

In NERF Epic Pranks!, however, there are no time constraints within which you must accomplish the objectives. All targets will either remain in place or circle back to it and not one of them will ever get close enough to catch you in your hiding place. The initial levels will certainly be easy and you may find yourself breezing through several levels without ever getting caught but expectedly, latter levels will become more and more challenging. As such, it is important to be as patient as you can be right from the start and carefully observe targets before you start shooting at them.

2. Always Look At The Numbers

There are basically two types of targets you will tag in NERF Epic Pranks!: There are unarmed people who will just look around and catch you if they see you long enough while shooting at them, and there are those with their own NERF blasters that shoot back at you from time to time. Each type may have differences as far as strategies in hitting them and avoiding getting hit or caught is concerned but both have numbers above them.

The numbers above each target signify the number of hits it will take for you to be able to eliminate them. These numbers may range from 10 to 35 and your goal is to reduce it to zero. With auto aim always active in NERF Epic Pranks!, you will always target the same person and will have to take him or her out before you can start blasting the next one.

Sometimes, blasting 2 or 3 consecutive targets that each take 10 hits and then going after another that requires 20 or more hits can be disorienting. If you are the type who wants to fully unload on a target that only requires 10 hits to eliminate, then you might get tagged occasionally if you move on to a succeeding target that has more durability. To ensure that you are always at the top of your game, always take note of the numbers on each target to be sure that you will not make careless mistakes.

For the first type of enemies that are always looking around, the exclamation mark above their heads are a clear enough indication that you will be in trouble if you continue shooting at them. As much as we prefer a more defensive approach towards going through each level, there is also such a thing as being overly defensive. For the most part, there is no need to be alarmed whenever you see the exclamation mark on your target but rather, be conscious on the alert level as indicated by their line of sight.

Initially, each of these unarmed targets will consistently look around and the span of their vision is indicated by an orange color. It may happen that they will catch you for a second and will continue to stare in your direction while continuing to show the orange color. The second stage is when the color turns red but the wide angle of their sight will stay the same.

For the most part, there is a wide enough gap within this period for you to stop blasting away at your target, especially since you only need to let go of your hold on the screen to do so. If you continue on just the same, the red area of sight becomes a lot thinner, giving you the hint that the target has already locked his sights on you.

Once you see the visibly thinner line of vision coming from your target, there is still a fraction of a second for you to quit blasting away and head back into cover. Keep in mind, however, that the counter does not reset, which means that the next time you get locked on by the same person, the counting continues on from where it halted during the previous instance. With this, you will more likely end up being chased by the person and ultimately get caught. As such, you should consider keeping your target’s vision within the second level or the red one, and only venture further beyond that when you are already an expert.

Targets in NERF Epic Pranks! that carry their own NERF blasters are the more dangerous type. Some of these people even shoot at you without being triggered. Of course, there will always be gaps within which you can unload foam darts on these targets. Some will give you more chances to hit them at every opportunity while others are bound to give you a tough time. As you progress further through the stages, these guys will also learn to move around and eventually even hide behind objects as well. One good thing to consider, though, is that their aim will never be as good as yours and as much as each one will continue to spray you with foam darts, only a couple of those will actually hit.

In any case, the most important factor to consider when dealing with armed targets is their distance from you. Unlike other shooting action games, NERF Epic Pranks! make it easy enough for you to be able to keep an eye on the foam bullets as they travel. After playing enough, you will notice that the speed at which they travel stays the same and what makes some duels tougher is that the distance between you and your armed target is closer.

Although there will be times that this will not change, you can still manage to sink in a few shots within the gaps. If the target constantly moves, then some of his or her positions will give you a longer span of time to unload some rounds.

5. Watch Some Ads To Speed Up Your Progress

Video ads have grown to become a part of many free-to-play mobile games. This is most especially true for casual and hyper-casual games given that most of these games cannot rely on selling in-game items or bonuses to ensure to continuous operation and update of the game. Although it cannot be helped that some people may still find its existence to be annoying or excessive, most especially in the case of ads that pop up in-between levels.

In NERF Epic Pranks!, fortunately, there are no video ads that pop up in-between levels. There are several opportunities for you to play some video ads, but each one is voluntary and in most cases, you would be enticed to do so. Form extra coins, free skins, and more blasters, each video ad you watch as you play NERF Epic Pranks! can earn you sweet rewards.

To start off, each level you complete gives you coins that you can use to unlock more skins and celebration dances. Watching a short video at will instantly earn you 5x as many coins. As you can also earn extra coins from the wheel of fortune, you may want to do this until you have unlocked the skins and celebration dances that can be purchased with coins. Reaching certain levels make new blasters become available and the only way you can equip them is to watch an ad.

You do not actually need to do so immediately as you complete the level requirement and you can unlock it afterwards at the shop menu. There are gift boxes that you can earn as well after completing certain levels and you will have to watch an ad to open them up. Lastly, earning 3 keys will give you an opportunity to claim 3 rewards from 9 choices. You should not worry much if you do not grab the best reward after expending your keys as watching an ad on that screen earns you 3 extra keys.

You can actually play NERF Epic Pranks! completely offline and to do so, you only need to turn off your Wi-Fi or mobile data before launching the game or even while playing it. Keep in mind, however, that you will not be able to take advantage of the ad boosts we mentioned above. In any case, you can clear all levels with everything you are armed with on the first level. It is just that customizations, celebration dances, more blasters, and the idea of collecting can add more fun to any game.

That would be all for now as far as our NERF Epic Pranks! guide is concerned. Playing defensively and staying ever patient maybe the surefire way of beating every level and unlocking everything in the game, but living a bit more dangerously and shooting at targets while they are looking at or shooting at you can undeniably be more exciting. If you have played NERF Epic Pranks! for quite a while and have discovered some more tips or tricks we have not mentioned, then feel free to drop us a line!