Once again, SayGames has brought us another simple, yet captivating mobile game, in the form of Johnny Trigger. In a way, Johnny Trigger continues in the footsteps of the company’s previous games such as Battle Disc and Clean Road to name a few.

As a rule of thumb, SayGames creates titles that usually feature a minimalist design, but the gameplay can provide players with hours of entertainment. Well, the same applies to SayGames’ latest game, Johnny Trigger, which is out now on iOS and Android platforms.

The concept of Johnny Trigger is simple and easy to understand. Just go on a run and blast your way to the end of the course, obliterating the mafia along the way. Well, this could be easier said than done because there is much more beneath the surface. Thus, make sure to check out our Johnny Trigger guide for a bunch of tips, cheats and tricks. By doing so, you will learn all there is to know about the ways to become the most respected gunman ever!

1. Keep Your Finger On The Trigger At All Times

When playing Johnny Trigger, the timing of the shots will be of the utmost importance. Players need to be both patient and quick at the same time. If this sounds like a paradox, allow us to explain. The direction of your shots will be indicated with a red line, similar to a sniper scope. So, this line holds the key to a successful shot. 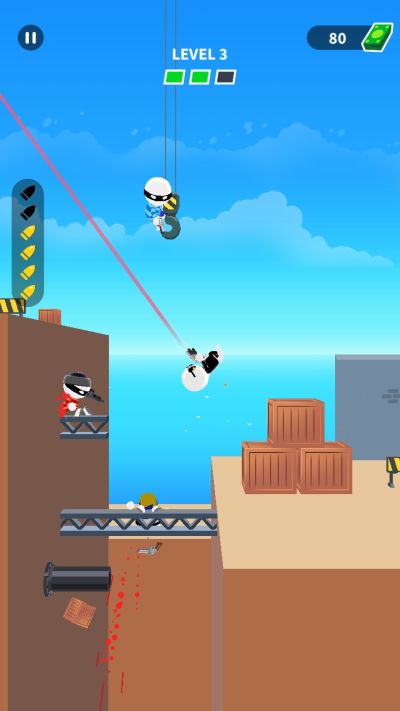 You need to wait until the line aligns with the enemy gunman. Sometimes, the line moves clockwise, and in some cases, it will go the other way around. In a way, you never know what awaits you in the next shot. For that reason, it is best to be prepared at all times. Quick reactions are also needed when there are multiple enemies at one spot.

Also, if you manage to hit the perfect moment for the shot, you will score a headshot. These super-shots bring extra points at the end of the stage.

Admittedly, headshots are great, and they will certainly pump up your adrenaline levels. Yet, it is vital to keep a cool head when playing Johnny Trigger. Why? Well, the underground world of the mafia is a dangerous place, and mistakes can be costly. For example, what if you get carried away and start blasting without even thinking about the ammo? Spoiler alert: it would not end well.

The ammunition in this game is limited, and you should keep an eye on the available number of bullets on the left-hand side of the screen. Depending on the type of weapon, 5-6 shots will be in the round. Once you spend all of them, they will recharge on their own, but not during the action. In other words, you could be left dry when you need firepower the most. Therefore, try to eliminate opponents by using single-fire shots at all times. Single-fire will have particular importance during the Boss Fights, which will take place after every ten stages.

3. Detonate The Barrels And Other Explosive Items

Every once in a while, Johnny Trigger will provide players with a bit of assistance. For example, explosive items will be scattered along the road. What’s more, the enemies will often group around the barrels of fuel or some similar object. Of course, such a situation is perfect if you want to take out two birds with one stone. In some cases, the number of “birds” will go up to three or four with one single shot. 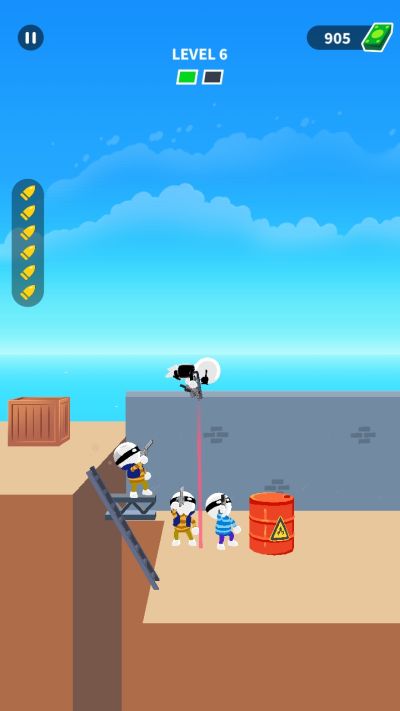 To be precise, you will need to hit the barrel to make it explode. Once the bullets hit the fuel, the ensuing detonation will obliterate everything in the vicinity. The unlucky gangster standing next to a barrel? He will be gone for good, no doubt about it. Thus, be sure to keep an eye out for barrels or canisters. Any flammable item will be of use so align the shots and cause as many explosions as you can.

4. Protect The Hostages At All Costs

The goal of the game in Johnny Trigger is to protect the hostages and save them from the mafia. To be successful in this mission, the players will need to be on top of their game at all times. The tricky part about this entire hostage situation is that the bad guys and the innocent ones all look alike. It can be hard to differentiate them at first glance. If you shoot a hostage, you will fail the level, and you will be forced to try all over again.

The hostages in Johnny Trigger will have a speaking balloon next to them. The words “Help Me” will clearly show that this person is not a threat. So, pay attention to these details when going on a run. Also, it is essential not to cause detonations if a hostage is standing next to a barrel. As you can imagine, the blast would hurt the innocent ones as well, so be cautious and patient when taking a shot.

5. Save Your Progress Whenever Possible

Going back to the start of the run would turn Johnny Trigger into s super-difficult game. With all the hostages and explosives, mistakes will happen, a lot. So, to avoid going back – the game offers a convenient solution. The element we are talking about is called checkpoints, and you will notice them when playing the game. 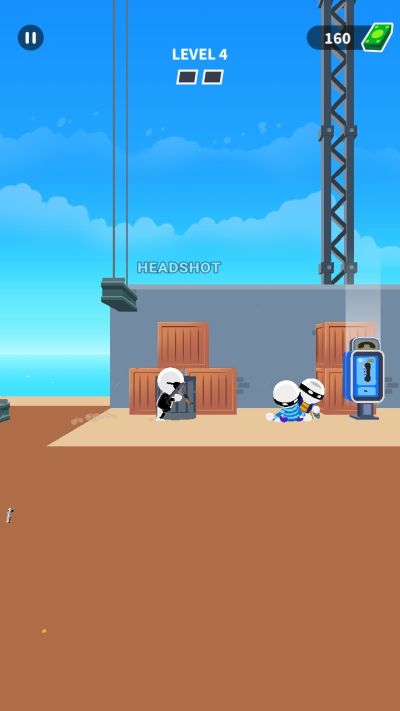 The checkpoints will stand next to the road, similar to a phone booth. As soon as you reach a particular checkpoint, the green light will turn on. What this means is that you will now continue from that spot if you make a mistake during the run. For instance, if a stray bullet hits a hostage, you will not go back to the very start of the level. Instead, you will have a chance to try again from the checkpoint. This time-saving feature will also save you from a lot of frustrations. Thus, players should do everything they can to reach the checkpoints.

6. Skip A Level If Necessary

Johnny Trigger features a colorful backdrop, full of interesting details. Yet, some critics say that the levels are repetitive and that they all look the same. Of course, once you start playing the game, you will be able to verify the validity of such claims. Either way, the gameplay will put you to the test, no doubt about it. As we said earlier, lots of planning and strategic thinking will be necessary to beat certain levels.

But even if you don’t manage to find a way around certain obstacles, don’t worry. We’ve got you covered! The solution is simple and straightforward – skip the level and move on to the next. Of course, this feature does not come free of charge. Players need to watch a quick promotional video to activate the possibility of skipping a level. Nonetheless, the deal seems more than fair. Spend 15 seconds watching a video and move on to the next level without any problems.

7. Buy Guns And Outfits At The Shop

To become the best underground assassin, you will need the best possible firepower. Well, Johnny Trigger is a game that features a wide array of pistols and submachine guns. What’s more, there is even a category of weapon called Super Guns. This category is available at higher levels. At the early stages, pistols will be the only available option. After a while, submachine guns will be able to offer better stats when it comes to Damage and Magazine. 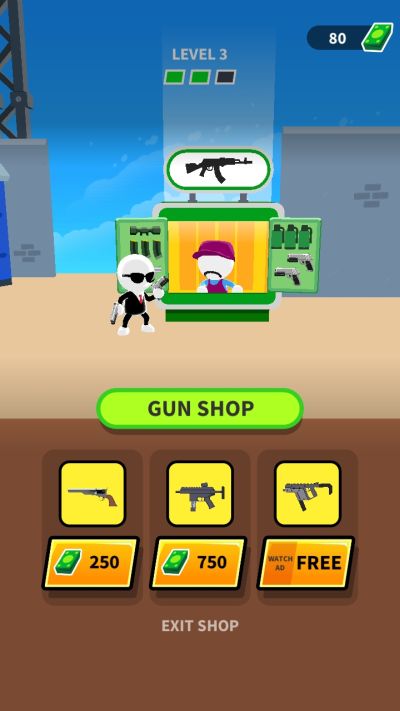 To obtain new guns, you should visit the Shop on the right-hand side of the screen. As we said, three classes of weapons will be at your disposal. Of course, you will need lots of cash to unlock the coolest guns. But it will all be worth it. Improved firepower will boost your chance of surviving the encounters with the enemy. Also, the section of the Shop located on the left-hand side of the lobby will provide your avatar with fresh new looks.

As you can see, Johnny Trigger is a generous game, and it offers all sorts of possibilities. So, we need to mention another rewarding option, which comes in the form of the so-called Gift Boxes. These Boxes come in groups of three, and you can open up one of them for free. The other ones will require that you splash the cash. Or, the more probable requirement will be to watch an ad.

No matter the condition, we recommend that you do what needs to be done. Why? Well, the Gift Boxes in Johnny Trigger are highly valuable. They can reward you with all sorts of items. Weapons included. Your best guns will come as a reward for opening the Gift Boxes.
On the other hand, some Boxes will often provide you with cash. You can then use the money to buy new weapons or outfits in the Shop. Either way, the Gift Boxes are a great way to improve your powers and defeat the bad guys.

With the final tip, we wrap up our Johnny Trigger guide. Yet, if you happen to know additional tips, cheats or tricks that we could add to the list – feel free to leave us a comment!

How many dice does it take to at least get the Ultimate Outfit or Weapon? I don't wanna waste my dice.

Is there anything after the cave?

Pretty sure kiosk is the shop where you buy guns at the end of a level.