Created by SayGames, the team behind addictive games such as Idle Painter and Twist Hit!, Clean Road is an entertaining and colorful driving simulation. The game is available for iOS and Android devices, and you can find it on the App Store and Play Store. When playing this arcade game, you will be in control of a big snow plow, trying to make it to the end of a congested road. However, the traffic jam will not be easy to go through, and you will have to use all of your ingenuity to find a safe passage. 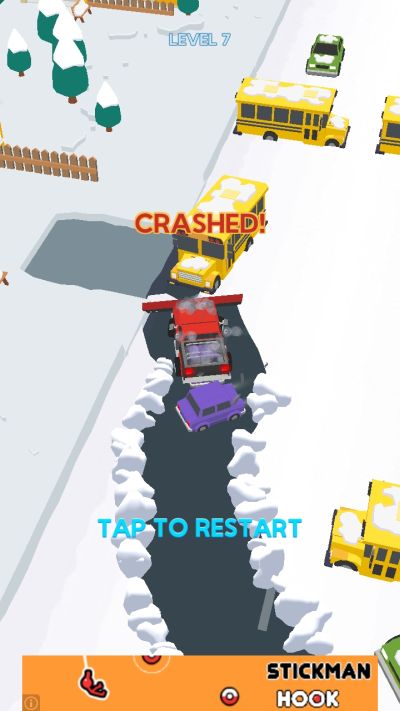 Because of the fact that some of the missions in Clean Road can be quite challenging, we decided to create a list of useful guidelines. As a result, our Clean Road guide will present you with the most important Clean Road cheats, tips and strategies. So, without wasting any more time, let’s see how you can get through the mayhem on the roads.

1. Collect The Stars By The Side Of The Road

Clean Road is a mobile game that does not feature complex storylines or demanding missions. On the contrary, this little simulation is as straightforward as it gets. In a way, your only job when playing Clean Road is to get from point A to point B without causing a crash, i.e. a car accident. Of course, this is easier said than done. 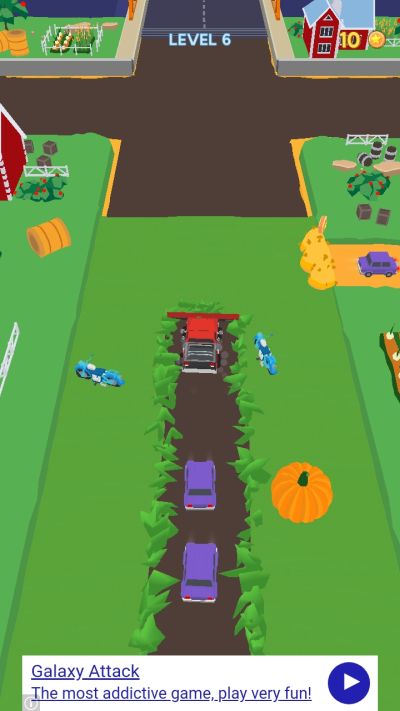 Once your snow plow starts rolling down the street, you will notice that the highway is in total chaos. All sorts of obstacles will get in your way – from stranded schoolbuses to giant snowballs. Since the cumbersome snow plows are not known for their maneuverability, it will not be easy to go around those roadblocks.

Furthermore, you will be followed by a couple of cars that need to get out of the congested street. By the side of the road, you will notice bright yellow stars. Those stars signal the place where a car awaits you. Once you ‘set it free’, the vehicle will follow the snow plow, staying on the path that you clear out. Be sure to collect as many stars as possible since they play a vital role in the gameplay of the Clean Road!

Driving a snow plow is no easy task, even in perfect road conditions. When a blizzard hits the streets, this task becomes even more challenging. That is why players who try out the Clean Road could be having some difficulties in the early stages of the game. But, as soon as they grasp the basics of controlling the steering wheel – the snow plow will steamroll through many barriers on the road.

Yet, not all obstructions on the street are the same. In other words, some of them can be removed easily and you can drive past them, but others could be a tough nut to crack. Some of them just won’t budge, no matter how hard you ran into them with the snow plow. That is why frequent changes of direction are the key when playing Clean Road.

The best course of action you can take when trying to reach the end of the road is to zigzag along the street. Like a shark, always keep moving! Lateral movements on the highway may not make a lot of sense in real life. But in Clean Road, they can open up new possibilities and escape routes. So, never stop moving or your snow plow will cause an accident, resulting in a failed mission.

3. Bulldoze Your Way Through The Small Obstacles

As we said earlier, not all impediments on the streets in this game will be the same. Either way, your job is to get the vehicles to the end of the road in a safe manner. They must get there without any inconvenience, i.e. without bumping into your snow plow. 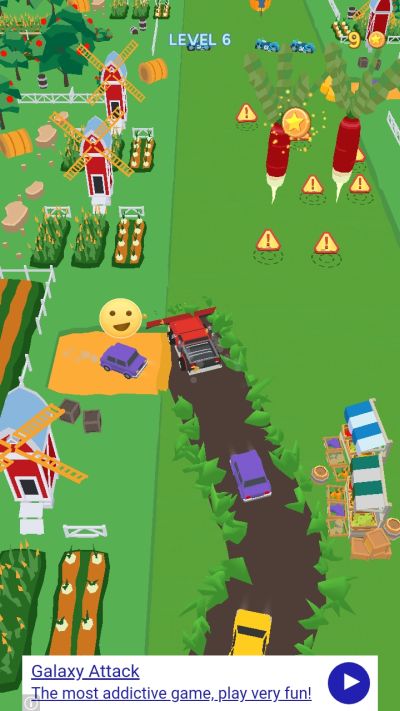 With so many objects lying around on the chaotic streets, it could be difficult to decide which way to go. Should you stick to the left and try to move a pickup truck out of the way or should you drive down the middle of the street and pray that the road is clear? Well, it depends. For instance, smaller obstacles can be moved out of the way easily. Small road signs, shopping carts, and other items are no match for the strength of your snow plow. Just go straight at them, with no worries that they could stop the plow.

But, we advise the players to differentiate the objects on the roads. Unlike those ‘light’ barricades, some obstacles will stop you in your tracks. When that happens, the cars that follow your lead will rear-end your snow plow. In short, you will fail the mission.

4. Observe The Surroundings At All Times

When driving through the freezing cold streets in Clean Road, the players should always keep their eyes open. Moreover, they should keep an eye on all objects that surround them. Clean Road features two types of obstacles – the static ones and the dynamic ones. Both of them can cause you problems, so try to learn how to deal with each type in the most effective manner.

As a matter the fact, we already explained how to evade the static impediments. Some of them can be removed easily while others require you to go around them. Either way, once you memorize their positions, you can solve any of those obstructions. On the other hand, dynamic barriers are a bit more problematic.

For instance, a giant snowball will roll out onto the road in front of you from time to time. Also, oversized pieces of ice or giant carrots can suddenly fall from the sky. Everything is possible when playing Clean Road, so observe the surroundings at all times! Most of these obstacles appear in periodic patterns, and by memorizing their schedule – you can find your way through the commotion.

The power of the snow plow is an important element when playing Clean Road. The stronger the truck, the easier it will be for you to eliminate the annoying barricades. Consequently, the vehicles that follow you will find it easier to reach their destination. 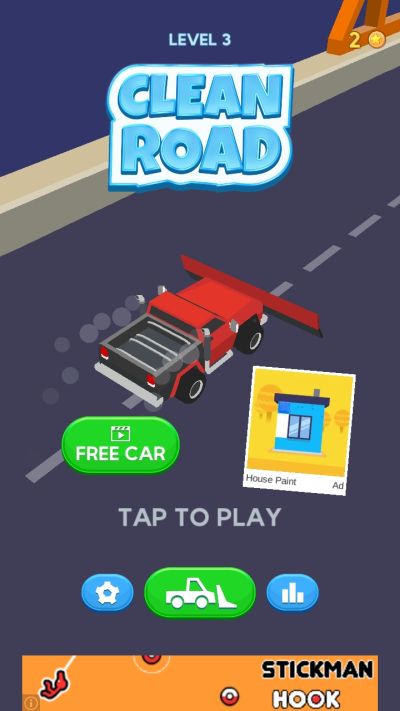 But, the snow plow at the initial stages of the game will not be as agile or as strong as most players would like it to be. In other words, the truck will take a lot of time to turn in the preferred direction. Not to mention the fact that you will be able to steamroll only the small items and objects on the road.

With that in mind, it seems that the best course of action is to upgrade your snow plow or get a new one. We will explain how you can enhance the existing one in the following chapter. For now, let’s see how you can get a new snow plow in a hassle-free manner. At the lobby screen, the game will present you with an opportunity to unlock a new snow plow. The only thing you need to do is to watch an ad. Luckily, the ads take from 10 to 20 seconds. Therefore, click on the offer and watch the video to receive a more powerful snow plow.

Besides providing you with a new truck every once and a while, Clean Road allows you to upgrade your existing snow plow as well. By enhancing the bulldozer-like machine, the players boost their odds of getting through the meltdown in a fast and efficient way. After all, a bigger snow plow will have better chances of shoveling pickup trucks out of the way than a small one will.

Also, Clean Road presents you with the upgrades in a convenient manner. Once you complete any mission, you will be asked if you would like to upgrade the car. Normally, all reasonable players will accept such an offer without second thoughts. But, you should know that the upgrades do not come free of charge. In return, you have to spend a few seconds watching an ad.

To sum up, Clean Road offers upgrades for your snow plow if you watch a promotional video. This seems like a fair deal, so invest the time and start driving around in an invincible truck.

7. Collect And Invest The Stars

The stars are the only in-game currency in Clean Road. As we already mentioned, this is not a complicated game so there is no need for an elaborate resource-collecting system. As a result, players only need to accumulate as many stars as possible. The more cars you free from the traffic jam – the more stars will end up in your bankroll. The amount of stars you have at your disposal is displayed in the upper right corner. 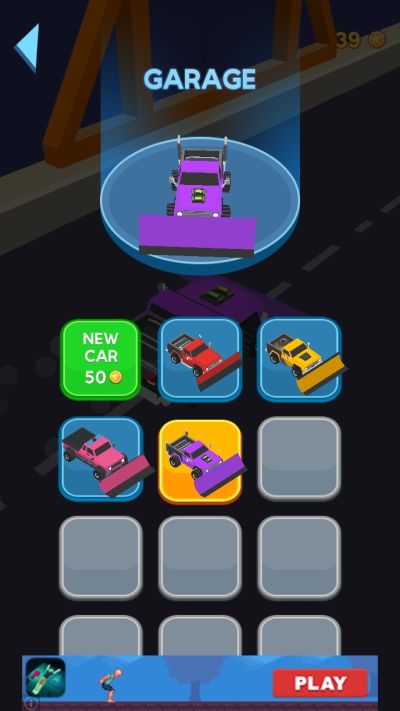 The most important thing you can do with the stars is to invest them in new snow plows. We explained that the game will sometimes present you with a new truck, but this will not be as often as you would like. That is why we advise the players to save up the stars and use them for unlocking new cars. At the lobby screen, there is an icon that will lead you to the garage. The garage contains a wide array of snow plows. By investing the stars, you can unlock a powerful machine that will allow you to get rid of any roadblock.

With this tip, we wrap up our list of Clean Road cheats, tips and tricks. In case you are familiar with any other useful strategy for this game, feel free to drop us a line!

None of the free this number of cars without crashing challenges ever tally or can be won when I’m playing it. Obviously it’s a big glitch . I just did a fix the glitch game update today, and I have no idea what it fixed, but it didn’t fix that problem at all.

Yep...having the same issue Sean!! Need to get that glitch fixed ASAP!!