As we all know, ice hockey is an action-packed and somewhat frantic game. If you decide to try out Battle Disc, you will see that modern mobile games can also offer entertaining simulations of ice hockey. To clarify, Battle Disc is one of the newest releases from SayGames, the guys who also gave us popular titles such as Clean Road and Perfect Slices. Needless to say, Battle Disc is another addictive title, which is available for your iOS and Android devices.

Even though the basic concept of ice hockey is simple and straightforward, this game will require a lot of skill and concentration. In total, Battle Disc offers 50 different levels. To reach the final ones, you will need all the help you can get. Be sure to check out our Battle Disc guide for tips, cheats and strategies, as it can save you from a lot of headaches. So, let’s start with our 8-point list of the most important tips and strategies for the game.

1. Try To Stand In Front Of The Blocks At All Times

When playing Battle Disc, the players are in control of an avatar who will throw the disc at the enemies. The goal is to smash all the blocks that are located behind the opponents. Of course, they will try to stop you on this mission. In fact, the opponents can grab the disc and hurl it back at you, destroying your blocks in the process. So, it is important to stay alert at all times when playing Battle Disc. 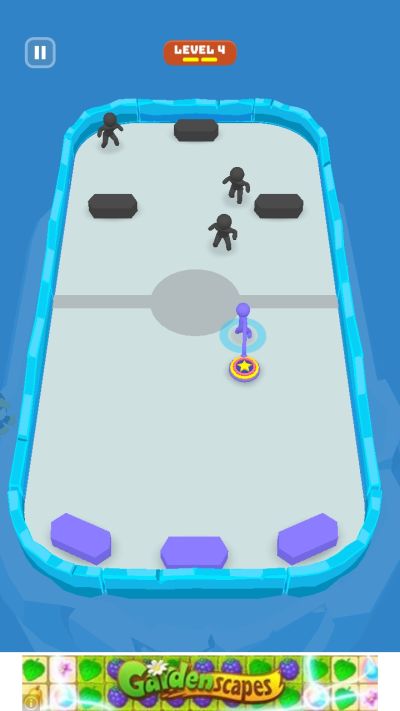 By sliding your finger on the screen, you will be able to control the avatar. With that being said, is imperative that you understand the importance of good positioning. In other words, if you find yourself at the right place at the right time, you will have no problems with beating the opponents. Well, the best place you could be is to stand in front of your blocks. As a result, your avatar will grab the disc before it causes any damage. And, you can then launch the disc towards the enemy.

Even though ice hockey is not a game where you would expect to see a lot of strategic thinking, Battle Disc requires careful planning and execution. Why? Well, for starters, the levels in the game will become more and more challenging as you climb the ranks. Also, the fact that the opponents can catch the disk and throw it back into your half of the field is a dangerous element. By doing so, they will not only prevent you from scoring, but they could destroy your blocks and make you lose the game as well.

For that reason, it is crucial that you make every shot count. To do this, we recommend taking your time and playing at a slow pace. Battle Disc can often turn into a hectic mess, but you should try and keep a cool head. Instead of rushing your moves, try to observe the situation and come up with a plan. After that, hurl the disc toward the other half of the field and destroy as many blocks as possible.

3. Wait For The Perfect Moment Before Throwing The Disc

The playing area in Battle Disc is called an arena. In terms of style, every chapter in the game will feature a different look of the arena. Either way, every playing field in the game will be divided into two sections – one half for you and the other one for the opponent. Also, Battle Disc is offering a dynamic and proactive environment. In other words, the enemies and the blocks will often be on the move. 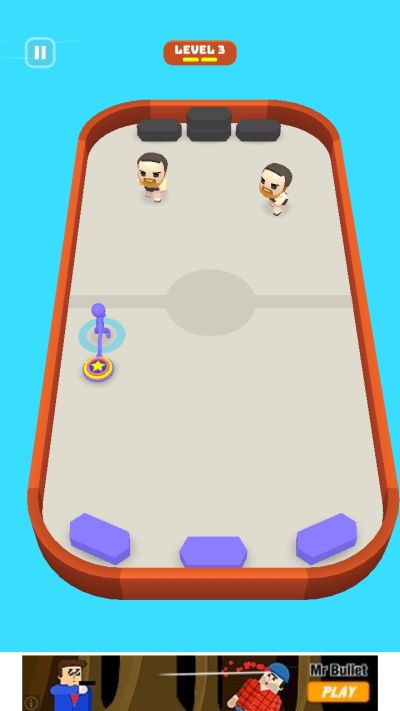 As a result, you will have to pay attention to their movements. Once you recognize a pattern, you should try to exploit the available space. For instance, if the group of opponents has moved to the left-hand side, you should be quick and send the disc towards the opposite side. Likewise, all sorts of obstacles will be moving across the playing field. Once again, the principle is the same – synchronize your moves with the movement of those items.

4. Detonate The Bombs As Soon As They Appear

Speaking of items that will appear in the game, bombs are probably the most useful type of objects that you will find. Designed in an old-fashioned style, oversized bombs will drop on the playing field every once in a while. And, they could be the perfect tool to help you get rid of the opponents.

So, whenever a bomb lands on the field – send the disc straight at it! In some cases, the bombs will bounce and levitate, which means that the disc could slide underneath them. For that reason, time your moves and coordinate with the movements of the explosive device. But, once you achieve contact and detonate the bomb, the impact will clear out a large section of the arena. In other words, you could eliminate the enemies and progress to the next stage in a simple and effective way.

5. Use The Hammer For Taking Out Your Enemies

To be fair, bombs are a powerful weapon. In a way, they can help you beat the enemies and climb the levels in a flash. However, the bombs are not always available. As we said, they appear from time to time, in a random manner. As a result, you will have to rely on other tools and weapons to win every duel in the Battle Disc. Well, the mighty Hammer is one such weapon, and you should learn to use it as soon as possible. 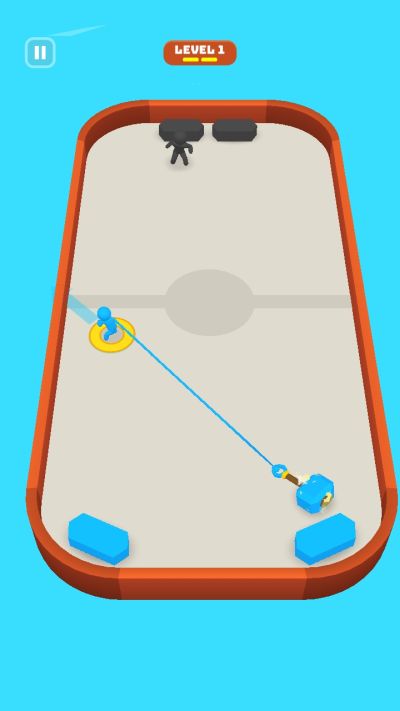 The Hammer works on a simple concept – every time you catch the disc, you will charge a meter. Once the gauge is full, lightning will shoot from the sky and present you with the Hammer of Thor. After that, you can take out the opponents in a straightforward manner – just hurl the Hammer at their direction. This powerful weapon will fly across the field, clearing out everything in its path. For that reason, always try to hit as many opponents as you can with the Hammer.

As we mentioned at the beginning of our Battle Disc guide, the game offers 50 colorful levels. They are divided into a couple of groups, with each offering a different setting. In other words, you could be playing ice hockey in the show, in the desert, and so on. Also, every single level in the game consists of a two-stage system. To clarify, you have to pass both tests if you want to complete the level and move on to the next.

Of course, this is sometimes easier said than done. The opponents in the game will become more ‘intelligent’ as you climb the levels, making it difficult for you to break the blocks behind them. Yet, the game offers a simple solution that can help you progress through the game. So, every time you make mistakes and lose the game, you can use the option of Reviving the avatar. As a result, you will continue the play at the same moment where you made the mistake. The only price you have to pay is to watch a promotional video.

As you play the game, Battle Disc will present you with all sorts of challenges. Needless to say, generous rewards will go your way if you manage to complete those tasks. For instance, three missions will be available at all times. As soon as you complete one of them, a new one will appear. In most cases, you will need to reach a certain milestone to complete the tasks. 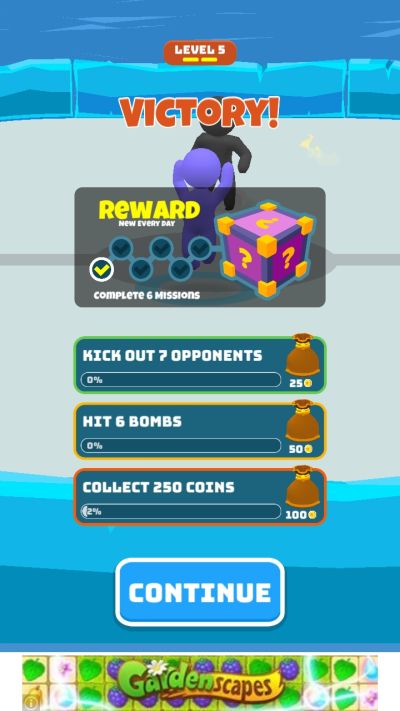 Either way, a bunch of gold will wait for you. So, try to complete the challenges one by one. The more gold you collect, the better items you will be able to buy at the Shop. With that being said, it is important to note that Battle Disc comes with a wide array of available items. In other words, you can customize all sorts of elements, such as the appearance of the avatar or the shape of the disc. However, you will need gold to make the purchases. And, that is why Daily Rewards and other tasks are a great way of collecting this in-game currency.

The gold in the Battle Disc is a precious commodity, and we recommend that you collect it at every opportunity. By doing so, you will be able to unlock a wide array of cool features. Even so, there are other ways for unlocking rare items. One of them comes in the form of a Lucky Box, and this gift will also land on the playing field every once in a while.

As the name suggests, the Lucky Box is a gift that will provide you with a certain item. But, you will need to be lucky to win something valuable and important. In a way, Lucky Box is a type of lottery, and you never know what are you going to get. Even so, we suggest that you open every Lucky Box that pops up. Yet, these gifts are not free of charge. To clarify, you will have to watch an ad to open the box. But, 20-30 seconds are a small price to pay in exchange for valuable items.

And this wraps up our list of Battle Disc tips, cheats and strategies. In case you know any other useful tips or tricks for the game, feel free to drop us a line!

@Camardelle Elijah, You have to win with our loosing a block