Cure Hunters is an exciting new mobile game developed by Lucky Kat Studios, the same company which gave us Beat Street and Nom Cat. The game is an action-paced platformer with roguelite elements, with a fast pace, and 10 unlockable characters. Cure Hunter takes place on the planet Earth, which gets hit by a meteorite, which in turn brings a powerful virus that infects most of the population of the planet. Your goal is to kill all the infected people, who turned into monsters, to avoid the infection to spread even more, while the survivors research a cure for the disease. In order to advance to the following level, you have to kill every single enemy in an area. If you want to win more epic boss fights and unlock new characters, then be sure to check out our Cure Hunters beginner’s guide for tips, cheats and strategies!

There are 10 characters in Cure Hunters, each one of them has its own Hit Points, and weapon. There are 3 categories of base weapons: Pistol, Machine Gun, and Rocket Launcher, each one of these has its own quirks: different fire rates, recoil, and damage. Obviously, the most expensive characters are the most powerful ones, but luckily even the middle-tier ones are good enough to complete the game in one sitting, as long as you play well. Let’s have a look at the various characters in the game.

The character you start with. Dr. Dellton is equipped with a regular pistol with decent fire rate, low recoil, medium fire range, and that deals 1 damage per shot. This combined with the fact he has only 3 Hit Points makes him relatively weak, and you should look into upgrading to a better character as soon as possible.

The cheapest character to unlock, Ramboy is slightly better than Dellton. He has 3 Hit Points, much like Dellton, but his weapon is overall slightly better. It is a machine gun with very high fire rate, low range, and that deals 1 damage per hit, the recoil is pretty annoying, as you can’t move ahead while shooting, you will be stuck in place. You can hold your finger on the fire button to keep firing and make maximum use of the damage he offers.

As mysterious as his sprite indicates, Hoodie is a odd character in the game. For starters, he has only 2 Hit Points, which would make him pretty bad, but then you look at his weapon, a Laser Pistol that deals a lot of damage considering its pretty high fire rate, low recoil, and medium fire range. A purely offensive character that will require some finesse to make the most out of, but a real boss killer if you can survive the fight for long enough.

A straight up upgrade of Ramboy. They both have the same weapon, with high fire rate and low range, except Killron’s deals 2 damage per hit, compared to Ramboy’s 1. A 100% damage increase is nothing to scoff at, especially since most enemies in the game have pretty low health, bosses included. Additionally, Killron has 4 Hit Points, 1 more than Ramboy, which means he is just better in every aspect.

The zombie version of Dr. Dallton. Ss you could guess by its price, is an upgraded version of the character he is based on. Sporting a Laser Pistol that has the same fire rate, range, and recoil as Dr. Dallton, it does 3 times as much damage, with a whopping 3 damage per hit. He also has 5 Hit Points. Very good character, even if you can’t afford the higher tier ones, Zombie Dallton will make finishing the game way easier than with the earlier characters.

The pattern of “every character is just an upgrade to the previous one” breaks with Zombie Ramboy. Don’t get me wrong, Zombie Ramboy is better than everything we have seen so far, but at least he is slightly different. He has 6 Hit Points, which is twice as many as Ramboy’s, but his weapon is what makes him really different. A Rocket Launcher that deals 5 damage per hit, with low fire rate, and that deals damage in an area around the explosion. This means that you are able to hit yourself, making him to require some getting used to, also he is very bad at fighting in close quarters. This makes enemies that jump towards you pretty dangerous. Overall, a pretty powerful character that needs some experience to get used well.

We are back to the characters who are just an upgraded version with a different sprite. Zombie Killron uses a Laser Pistol that deals 3 damage per hit, and like every other Pistol, it has decent fire rate, medium range, and low recoil. What makes him better? The fact he has 7 Hit Points. 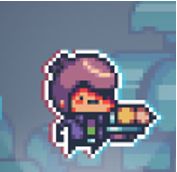 I know I’m sounding like a broken record, but…Dartfey is the last upgrade to the Pistol wielding characters. 8 Hit Points, 4 damage per hit, and all the other characteristic of the Pistol. Obviously very good, he requires a lot of coins to be unlocked.

When you unlock Diest, whose weapon is a laptop, you might think “finally a different weapon”. I have to give it to the developers, at least they tried to differentiate this character on a sprite level…too bad the laptop is just yet another Lase Pistol that deals 5 damage per hit. Diest has 9 Hit Points. That’s it really. Amazing character. 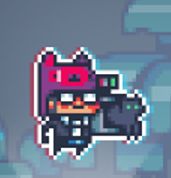 Herdjie is the most expensive character you can unlock, and for very good reasons. His base weapon launches explosive cats, that kill everything in one hit, except bosses, but even them get dispatched quickly because of how powerful this weapon is. Herdjie also has the most Hit Points out of everyone else, but there’s a catch. It is very easy to end up damaging yourself due to how his weapon works, so you will end up taking more damage on average than with other characters. It is also pretty hard to destroy the turrets attached to the roofs, which adds to the difficulty. He is still incredibly powerful, and when you learn to use him, he will clear the game very quickly for you.

2. Get Used To The Enemies’ Attacking Patterns As Well As Your Weapon

Knowing fully how to utilize your weapon, its damage, and the health of your enemies is crucial to finish the game. For example, you need to pay attention to your recoil when you jump and shoot, or you risk ending up into a spike trap, hardly a desirable prospect. Luckily, there are additional weapons in the game, which you can purchase at the end of each stage with Silver Coins, the currency you get for killing enemies. These weapons will allow you to survive in different situations where your base weapon would get you killed. The only downside to the extra weapons you can purchase is that they have a limited number of ammunitions, you can purchase additional bullets at the shops, and some enemies will drop them as well, although each weapon has its own type of ammo, so don’t rely on dropping the right one from monsters all the time. 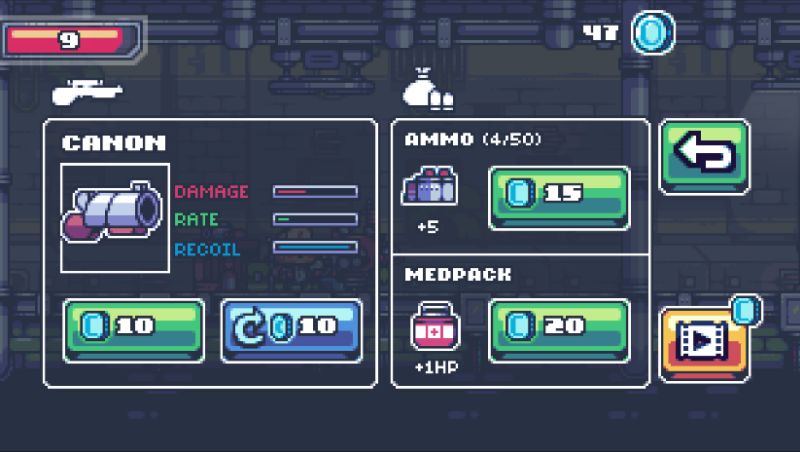 Bosses are the most important enemies to know the attacking patterns of, as it will make dealing with them much more easily. For example, you can easily defeat the first boss by sitting on a platform right next to him, shoot at him, and then when he starts attacking you with his projectiles, jump down and move towards a platform that is still next to him, except on the other side. Figure out how the various bosses attack, and quickly devise a plan to avoid their hits while hitting them constantly, and you will find yourself victorious easily.

As we have already said, different weapons are good in different situations. Rocket Launchers are great against bosses, as they deal massive damage, and are insane at medium range combat against groups of enemies thanks to the fact the damage they deal is in an area around the point they hit, and for this very reason they are terrible against enemies that are close to you. Pistols are the jack of all trades, as they are fine in every situation you can think of, they are the safe option if you are unsure on how you want to play the game. Machine guns are the opposite of Rocket Launchers, they are very good in low range fights, but they are bad at anything else, since their range is awful.

3. How To Obtain Gold Coins And How To Spend Them

Gold coins are the premium currency of the game, you can get 150 every day by voluntarily watching video ads, and 25 every hour by tapping on the present icon right below the Game Shop icon. It will take a huge amount of time to unlock all characters if you are not going to spend money on the game, and realistically, the game isn’t long enough to justify the wait. For example, unlocking Herdjie costs 8000 gold coins, which means that, assuming you get 4 times a day the free 25 coins every 3 hours, and the watch all the daily ads, it will take 27 days to unlock him. Considering the entire game can be finished in about 30-40 minutes, you might want to pick a less expensive character. My personal suggestion is to aim for Zombie Dallton, who is the highest value character all things considered. He doesn’t cost too much and he is good enough to complete the game. 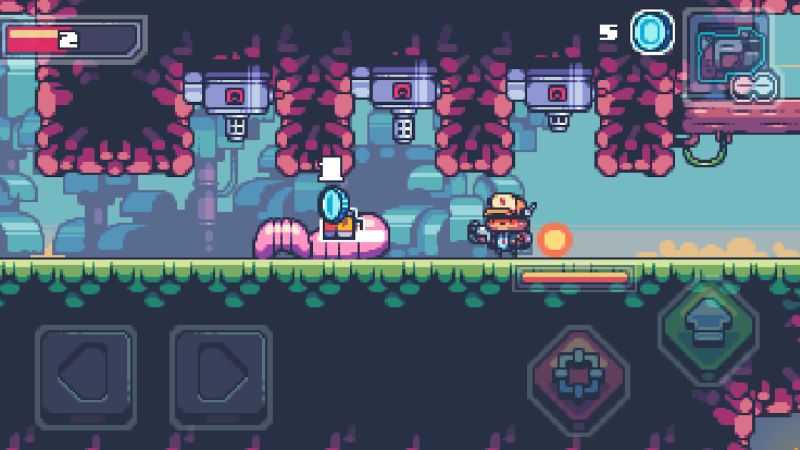 You can also spend gold coins when you die to continue the level from where you died, the price is 25 gold coins for the first revive, 50 for the second, 75 for the third, and so on, up to 200 gold coins, which is the maximum you will spend to continue. You can also watch a video ad to continue, but you can do this only once per run.

Do not spend gold coins to continue. Even if you have to restart the game from scratch, you will earn some more gold coins at the end of the game, and you should save up to unlock additional characters, as they will make progressing through the game much more easily.

This wraps up our guide for Cure Hunters, the game is rather short, but the stages are randomized, which means you will rarely play the same stage twice. There are plenty of characters to unlock, and the gameplay is dynamic and very fun. The biggest weakness of Cure Hunters is that it is pretty short, since you will only have to clear 3 bosses (plus the tutorial’s) to finish the game. Regardless, you should absolutely give this game a try, especially if you love platform shooters. If you have found any other extra tip or trick for the game, make sure to let us know in the comments! Happy shooting!