Crossing Void is a new gacha-RPG developed by 91Act and officially licensed by Dengeki Bunko. The game features various iconic characters from the many works published by the studio. As with every other gacha-RPG game, the goal is to build a team you are satisfied with and clear all the content available in the story, participate in events, and continually upgrade your characters and their equipment. If you are just starting out in the game, be sure to read our Crossing Void beginner’s guide for tips, cheats and strategies to build your dream team and crush your enemies!

The combat system in Crossing Void is similar to those in typical turn-based RPGs. Each turn you can pick an ability to use and your character will perform it. There are multiple things you need to keep track of during a fight. 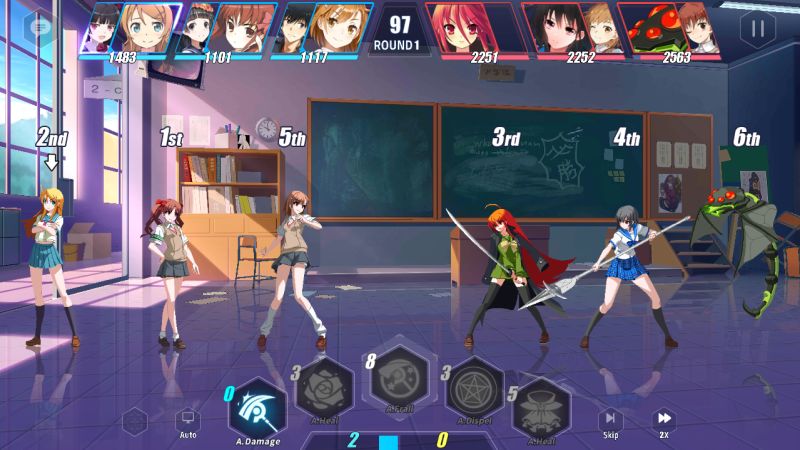 The numbers above each character represent the turn order. At the start of the battle the 1st character will move first, then the second, and so on. This helps you plan out your turn in advance, for example by using debuffs removals or healing at the right time, or using abilities that strike enemies in the backline right before their time to attack, to eliminate them, or to place debuffs on them, making them weaker.

To read what each ability does, simply tap on it and hold your finger on it, this will open a pop-up that will tell you how much damage the ability deals (usually based on the character’s current Attack stat), and every extra effect it will have. Some abilities can hit all enemies, some will only hit the enemy in the back, some will only hit the one in front, and most abilities can also inflict status effects. There are also healing abilities to keep your characters topped up, and that can remove debuffs from your team members. 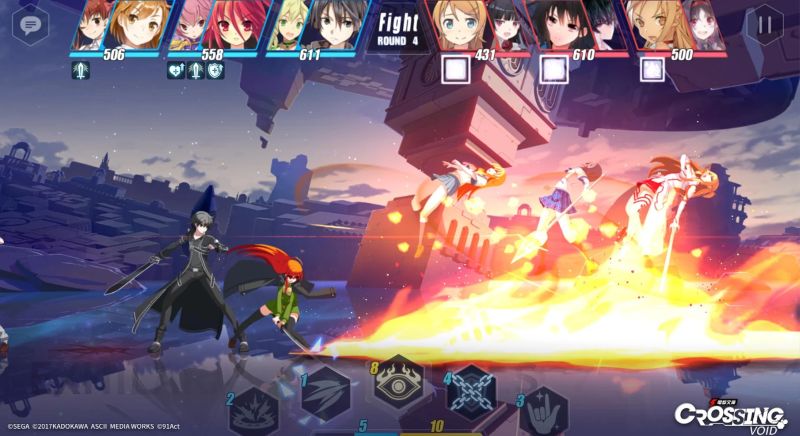 Speaking of buffs and debuffs, you can see what buffs or debuffs are currently active on every character: simply tap on them, they are right below the character’s portrait on top of the battle screen. This will let you decide whether or not you want to remove your negative debuffs, or how to proceed because of some enemy buffs. For example, you will want to avoid hitting an enemy with a buff that reflects the damage it takes, by either targeting someone else, or by skipping your turn entirely.

You can let the game play out the fights for you by selecting “Auto” once you reach account level 9. This is fine if you are facing stages you can easily deal with, but when you start losing battles, consider switching to manual mode fighting to maximize your fighting potential.

Your characters are those who do the work of clearing the stages for you, so take care of them accordingly, and they will repay you with easier battles and more resources. Access the “Character” menu from the main screen to see what characters you have available.

Related: Crossing Void Tier List: A Complete Guide to the Best Characters in the Game

The main characters are the ones who will actively participate in battle. They will deal the bulk of the damage, take it, and make use of their respective supports. Main characters have multiple abilities.

Some supports unlock extra abilities when paired with specific characters. For example, Kirino and Kuroneko work well together, whereas Boogiepop and Kuroko don’t. This means that you can’t just slap your higher-rarity supports together with your higher-rarity mains and call it a day. You can check which characters go well with which others in the character menu, by visiting the “Cross Skill” category. 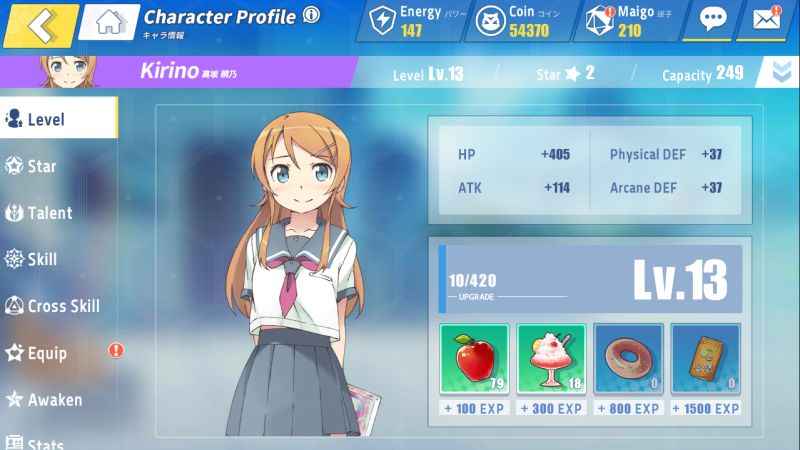 You can upgrade each skill singularly, and the maximum level of a skill depends on the character’s star level. To upgrade star level, you need resources called Bold Determination and Resolute Will. In order to upgrade the single skill you just need coins.

To level up a character, simply use them in battle, and they will earn experience, and their star level also influences how high you can level them. Note that the Speed stat isn’t affected by the character’s level, it is intrinsic to the character.

There is another way of upgrading your characters, this way is called “Awakening”. Awakening can give your character new skills, drastically improve their stats, and even new looks! Awakening requires specific resources, namely the character’s Exclusive Soul, and Common Souls. Only awaken characters you are absolutely sure you want to bring to battles, as the resources to awaken them are very limited. 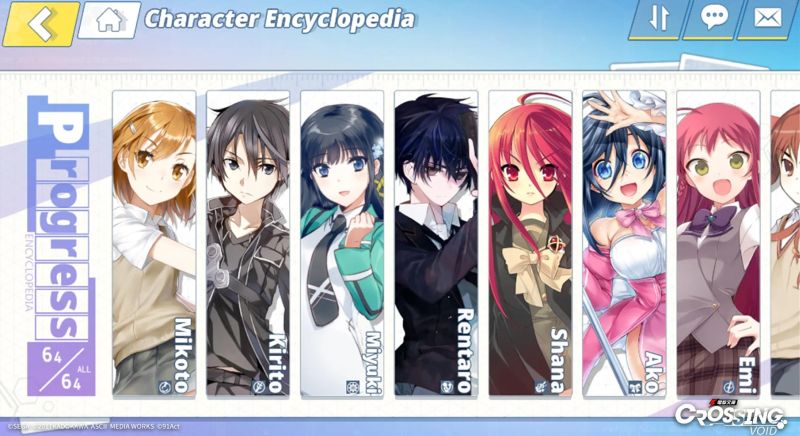 Lastly, there is another mechanic called “Inheriting”, which comes into play when you get a higher-letter copy of a character you already own. This lets you consume your lower-letter character to give all of its levels, stars, and even awakened status to the higher-letter one. This means that if you particularly like a character you can spend resources on them even if they are a low-letter one, since when you eventually get the high-letter ones you can just use the inherit function to get them up to speed immediately.

Clearing the Story in Crossing Void is a great way to progress, as it gives you plenty of rewards like experience and even new characters, but the side content (called “Challenges” in the game) is also very important. You can play this content as much as you want, and it gives out rewards that you can’t get by clearing the story missions.

For example Story missions seldom give out equipment for your characters, but you can just clear the first challenge, Treasure Hunt, to get multiple pieces of equipment and fully equip your characters, which improves them by a lot.

Related: Crossing Void Team Guide: How to Get the Most Out of Your Characters and Build the Best Team Compositions

There are many different challenges in Crossing Void. In order to unlock them, you will need to reach specific account levels. Here they are, with the rewards they give out when you clear them:

Treasure Hunt: Unlocked at account level 10, this challenge allows you to farm equipment and character experience.

The Pinnacle: Unlocked at account level 14, clearing this challenge earns you Gacha vouchers which you can expend at the Gacha machine to get more characters. 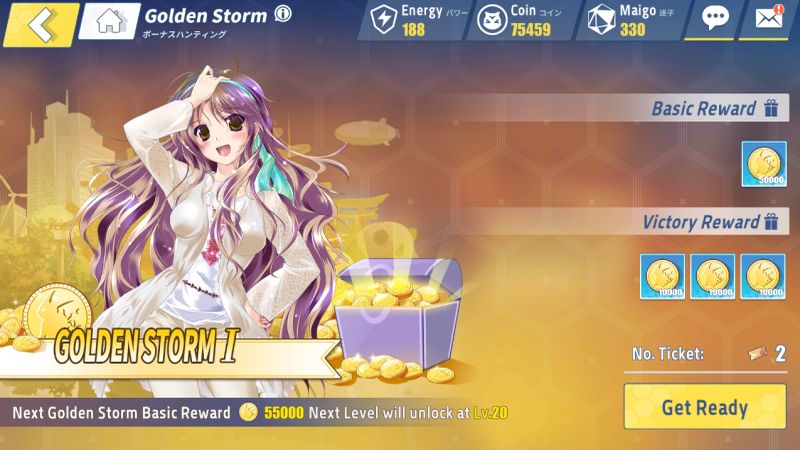 Void Trial: Unlocked at account level 18, clearing this challenge lets you earn fragments that then you can use to get their respective character, and Maigo, the premium currency of the game.

Void Agency: Much like the Golden Storm, this challenge earns you plenty of Golden Coins, and additionally you can get intimacy gifts for your characters. Unlocked at account level 20.

Mirage: Unlocked at account level 23, Mirage is a way to earn Equipment Experience, as well as earning Coins and Fragments. Entering Mirage costs you 1 Prism.

Decrepit Dream: This challenge is all about Maigo. You get free Maigo by completing it. You need a Decrepit Dream ticket to enter this challenge, and you unlock the ability to enter it when you reach level 26.

Burst Link: Unlocked at account level 28, Burst Link is only available at specific times of the day. The rewards for completing Burst Link are Fragment-Origins and Account Experience. Fragment-Origins are the currency used to Awaken characters, and you will need lots of them. Entering this challenge costs a Burst Link ticket.

Uncharted Void: Unlocked at account level 30, Uncharted Void rewards you with better Equipment and Character Experience., and it is a great way of training for a difficult battle you have been stuck on for a while. In order to enter this challenge you will have to expend a Void Exploration ticket.

Breaking Event: This challenge gets you Coins and Character Experience. Naturally, you will get a lot more of these than in the previous challenges, but also expect fights to be much harder than before. It’s a great way to level up your characters. Unlocked at account level 32. You need a Breaking Event Ticket to enter this.

Void Expedition: Unlocked at account level 35, completing this challenge will reward you with Expedition Coins, a currency used at the Expedition Coin Store to purchase higher-quality items, like rare pieces of equipment.

Pandemonium: The last challenge of the game. You need your account to be level 45 if you want to enter this, and a Pandemonium Exploration Ticket. Clearing the Pandemonium earns you Impression Weapon materials. Impression Weapons are an extremely powerful type of weapons that make your characters much stronger, and are absolutely worth to farm.

If you are just starting out, I recommend repeatedly clearing the Treasure Hunt until you have your main team fully equipped. This will in turn make clearing the story much easier, and you will easily be able to progress and unlock the higher-difficulty challenges.

4. Complete All The Missions

The game gives you a lot of missions and achievements when you are just starting out. Completing the various missions earns you many rewards, which will make your progression faster. When you manage to complete all of the starting missions, the game rewards you with an S-tier character of your choice. 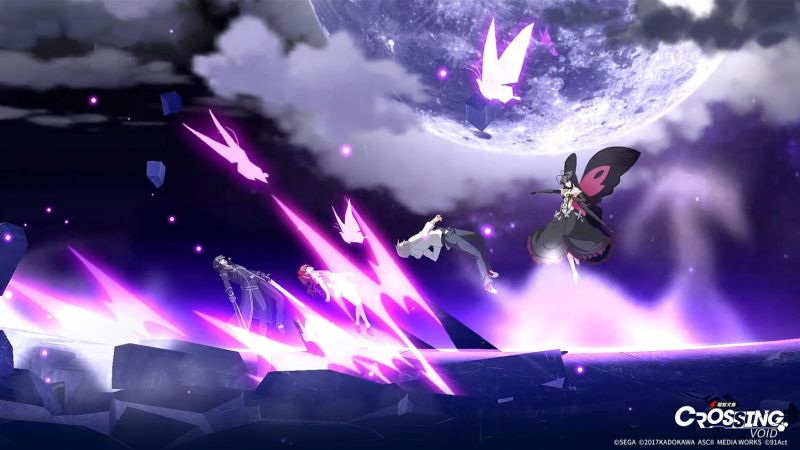 Following the starting missions is also a great way to get used to various aspects of the game, and shows you how to upgrade your characters, their equipment, and gives you nice rewards for it. It is a fully-fledged tutorial that shows you the basics of the game.

You can see what missions you still haven’t completed by tapping on the cat icon on the bottom of the main menu screen. On this screen you can also see which characters you can pick from simply by tapping on the golden part of the screen.

There are also additional missions that allow you to further explore all the features of the game, simply tap on the Missions icon in the main menu, and see what you need to do in the “Main Story” category. These missions usually reward you with Gacha Vouchers and extra Maigo.

This concludes our beginner’s guide for Crossing Void. The game has plenty of content and will keep you busy for a very long time, and seeing all of these iconic characters in the same game is a nice touch. As with every gacha game, it’s all about playing the long game and being patient and constant with your efforts. If you have found out about any other tip or trick while playing the game, make sure to let us know in the comments!