Due to its unique gameplay, Crazy Kick! is an authentic arcade football game. This super addictive mobile game was created by French casual gaming giant, Voodoo, that’s also responsible for other popular titles such as Fire Balls 3D and Swing Rider to name a few. When it comes to the company’s latest game Crazy Kick!, without a doubt, this one will provide you with lots of enjoyable moments.

Crazy Kick! relies on a straightforward concept – players should guide the ball from the starting position into the goal. Yet, there is more than meets the eye with this release. In other words, the challenging levels will test your agility, concentration, and skill. For that reason, our Crazy Kick! tips, cheats and tricks guide can be of use to any player who is just starting to play the game. So, let’s check how you can beat the goalkeeper and score tons of goals in Crazy Kick!

1. Keep Moving At All Times

So, when you start playing Crazy Kick!, you will notice that the game offers a colorful backdrop and minimalist design of characters. Your avatar will have the ball at his feet, and you need to make sure to keep it that way. To clarify, red-painted defenders will try to slide tackle you and shoot the ball out of bounds. If that happens, you will lose. But, once a defender performs his sliding tackle, he will stay on the ground for the rest of the game. 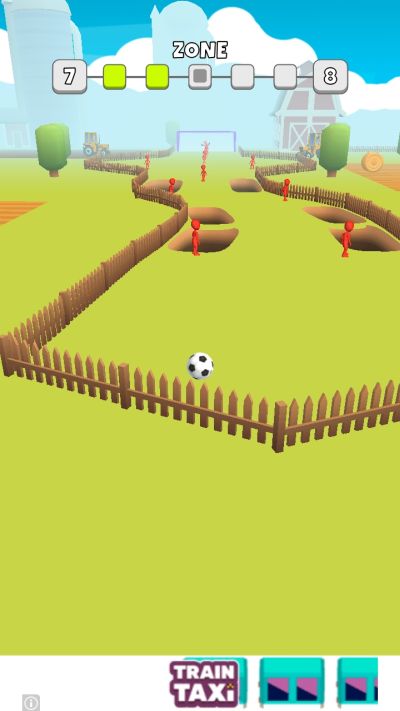 With that being said, it is clear that you need to avoid the tackles and move towards the goal. Well, due to a large number of opponents scattered around, this will not be possible at all times. Thus, you will have to zig-zag and run around to evade the defenders. Even so, the most important thing is to keep moving at all times. By doing so, you will not give them a chance to come near you and kick the ball out of play.

So, a bunch of red guys will be after you when playing Crazy Kick!. And even though this may sound scary, you can still turn the situation to your advantage. What we mean by this is that you can earn more points if those guys catch up with you. Of course, this may be counterintuitive, but this strategy is worth it. On top of that, not every sliding tackle that touches the ball will send it out of bounds. On the contrary, the fences around the playing field will stop a lot of those kicks. In translation, you should not give up even if the opponents succeed in kicking the ball away from you. 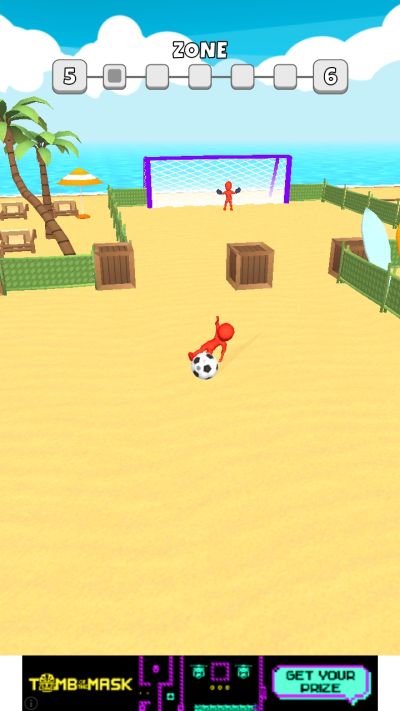 At the same time, every unsuccessful sliding tackle will reward you with +10 points. For that reason, lure the opponents and then dodge at the last moment! As a result, you will avoid the contact and the points will go to your bankroll.

3. Try Not To Retreat – Move Left Or Right

The secret to avoiding the sliding tackles lies in proper timing. Therefore, it is imperative that you synchronize your actions with the movements of the defenders. In a way, the opponents in the Crazy Kick! are not the brightest tools in the shed. In other words, you should be able to go around them without much difficulty. Of course, as you progress through the game, the number of defenders will make the task more challenging.

So, timing is of the utmost importance when it comes to completing the levels. To clarify, you should move either to the right or to the left when an opponent is coming your way. By doing so, you will collect the bonus points and eliminate the enemies at the same time. What you should not do is to try and go back, i.e. retreat away from the opposition. If you try this, you will see that the defenders will catch up with you every single time. As a result, you will have to play the level from scratch.

4. Guide The Ball Close To The Posts To Beat The Goalkeeper

As we already said, the goal of the game is to get the ball into the net. To do so, you will have to beat the goalkeeper. Of course, a bunch of his sidekicks will wait for you as well. Unlike the opponents in the field, the goalie is Crazy Kick! is a bit more stationary. In other words, he will not run at you at full speed. Yet, his sliding tackle can still kick the ball out of bounds, so you should be careful when overcoming this final obstacle. 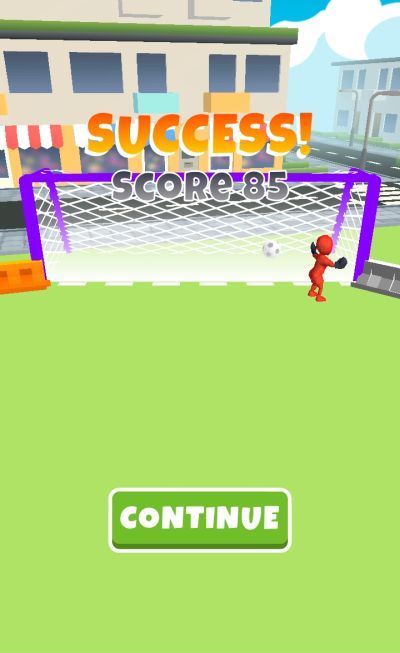 In short, the trick is in guiding the ball as close as possible to the posts. No matter if you choose the left or the right, the important thing is that you get the ball over the line before the goalie can react. On top of that, Crazy Kick! allows the players to kick the ball over a long distance, not just drag it along. So, swipe up with the finger whenever you are near the goal. By doing so, the ball should go past the keeper and end up in the goal.

Speaking of long-distance shots, you can also use them for scoring goals from afar. Of course, this is a sort of an advanced skill, but even beginners can master it with a bit of practice. The idea is to avoid being chased around by a bunch of ball-thirsty zombies. Instead, you could go for the glory and send a rocket straight into the back of the net. Needless to say, this strategy entails a bigger risk of missing the shot and having to replay the level.

Even so, we recommend that you try the long-distance kick every once in a while. So, to perform the kick, you will have to swipe up in a fast and energetic way. The faster you swipe, the longer the ball will go through the air. However, it is important to find a balance between accuracy and power. But, with practice, you should be able to find the sweet spot and send the ball under the crossbar with just one swipe.

6. Jump Over Holes And Fences

Long-distance shots are highly important when playing Crazy Kick!. As we said, you can use them to complete a level without avoiding the defenders. Yet, there are other elements of the game which will require the use of powerful kicks. For instance, you will often come across large potholes in the ground. Or, you will need to jump over a fence to get to the goal. When such situations appear, players will be ‘forced’ to send the ball flying through the air. 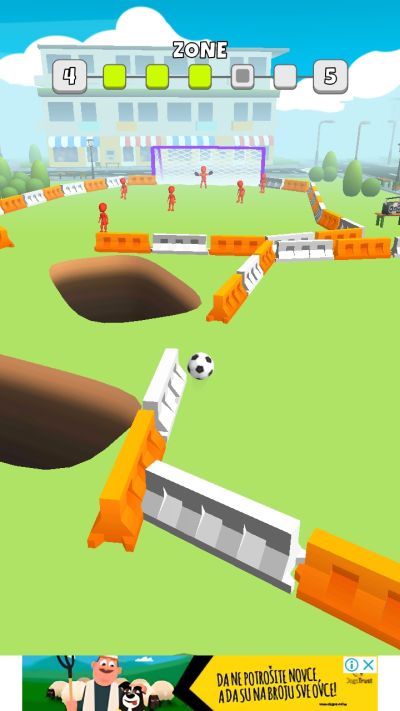 In essence, the principle is the same as taking a long-distance shot at the goal. All you need to do is to swipe upwards in a strong way. By doing so, you will provide the ball with a boost that will send it flying over the obstacle. Yet, it is crucial to keep the ball under control at all times. By sliding the finger to the right or the left-hand side, you can make the ball swerve while flying. So, even if you kick the ball in the wrong direction, you can correct the trajectory once the ball is airborne.

7. Stay Away From The Edge

When playing Crazy Kick!, you will have the chance to play football in all sorts of locations. And, some of those playing areas will be exotic and dangerous at the same time. For example, the roof of a skyscraper is probably not the safest place for a game of football. Even so, you will have to score goals on top of a large building to pass to the next level.

So, the trick with this type of levels is to stay away from the edge. What we mean by this is that you should try to guide the ball as close to the middle as possible. Needless to say, this will protect you from accidental slips. One tiny mistake and the ball will fly down into the abyss, forcing you to play the level all over again. But, the second element is more important. By keeping the ball in the middle you could survive some of the sliding tackles. If the defenders kick the ball, it may stop before it reaches the end of the field. Thus, avoid the edges as much as possible.

8. Skip A Level By Watching An Ad

In case all else fails, we suggest skipping the level by watching an ad. To clarify, the levels in Crazy Kick! will become more and more demanding as you progress through the game. They will feature more obstacles, more defenders, and so on. As a result, you could have problems with passing a certain level. 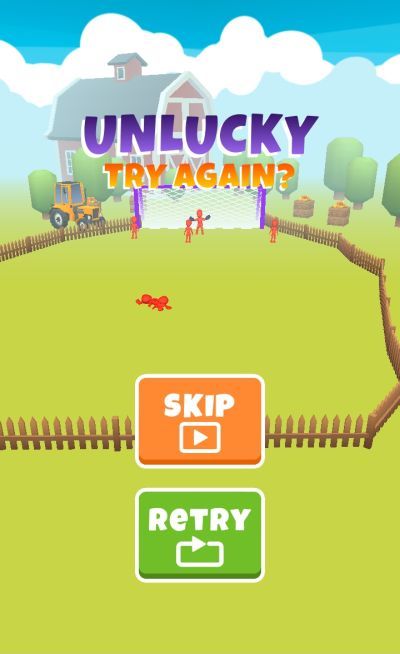 So, to avoid frustration, just hit the Skip button. Even though this option may feel like cheating, it is better than wasting time and going nowhere. By moving onto the next stage, you will be able to continue playing Crazy Kick! for hours on end.

There you have it! This would be all for now as far as our Crazy Kick! tips, cheats and tricks are concerned. Even so, if you know any other useful tips for the game, feel free to leave us a comment!

Can I become a defender?

@Jamie Nielsen, No you cannot you cunt