Ever wonder what it’s like to live another life all over again? In Candywriter’s popular game BitLife, you get to do just that and all in the comfort of your mobile phone. BitLife is a text-based life simulator where you get to live a new life from birth to death. What happens in that life depends on all the choices you make. Just like in real life, there’s a lot of things you need to keep track of like happiness, health, smarts, looks. You can also choose to live a righteous life or go down a criminal path. Whatever you choose, everything that happens is entirely in your hands.

Keep in mind though that each BitLife you have is different. Your stats may be better in one life and just dreadful in another. You may be born wealthy, smart, and good looking, or just the complete opposite. But whatever stats you may have, you can still live a good life as long as you play your cards right. You can be anything you want to be, if you make the right choices. There’s also a lot of career paths to choose from that can help you live the life you want. When we say there’s a lot of career paths to choose from, it means you can be anything from a simple farmer to an exorcist.

One of the most interesting career paths is being a pornographer. But it isn’t as easy as you would think. To choose this career path, you will need to have extremely good looks, health, and happiness. This is one of several career paths where smarts don’t matter. Although you don’t need to study well year after year, you need to keep yourself in good shape to maintain this job. If you start out being not so blessed in the looks department, you should start over because increasing your look stats is as challenging as increasing your smart stats.

Related: BitLife Careers Guide: How to Become a Lawyer, Doctor or an Acclaimed Actor

Don’t waste a good opportunity like this one. Once your stats get too low, you will get fired. You can always bring your stats back up and try to apply again. But age is indeed a factor here in this career path, and you will not always be accepted. Keeping your happiness and health up is fairly easy, but being born good looking is always a gift.

How To Become A Music Composer In BitLife 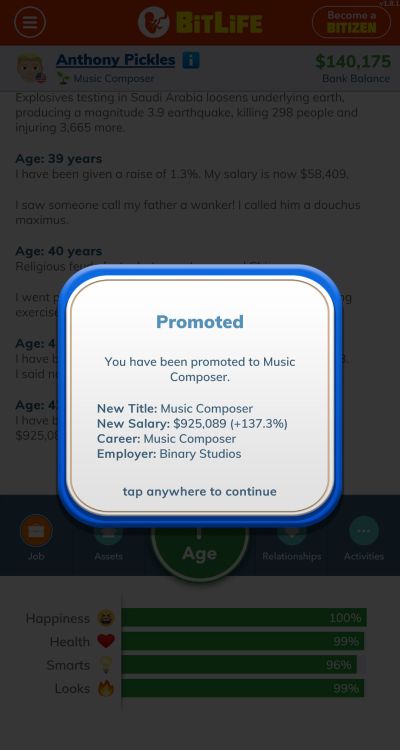 Being a music composer is one of those career paths where you don’t need to focus so much on your studies. Of course, in order to enter university, you’ll need to have decent enough grades to get in. If you can’t get into university, your stats may not be enough. You can go for community college or just study on your own in the library to at least get your stats up. Then you can try again to study in university. The apprentice music composer option will only appear if you take a music major. Getting another major will not qualify you for the job.

How To Become A Computer Programmer In BitLife

If you’re interested in becoming a computer programmer, the path you need to take is very simple. Similar to other careers, you’ll need to take a major that is related to computer programming in order for the job to appear on the list of jobs. In the case of the computer programmer career, the majors you should take are computer science or information systems. Your smart stats don’t need to be that high to get it, but it should be decent enough to get you into university.

Sometimes there will be job listings for more than one position. Always go for the highest one to maximize your earnings. Remember to constantly check the job listings every year because other companies may offer a much higher salary than the one you have. Again, if you’re not accepted for the job, you can always try again the following year or improve your stats for several years before you apply again for the position.

How To Become A Pharmacist In BitLife

Being smart is a huge factor in becoming a pharmacist. If you’re not born smart at all, you should focus on getting another career. You can also start a new life and hope that your smart stats will be higher this time. Being smart will always be the better choice. Not only will you cruise along your school life much easier, it will also help you in your financial life too. If your smart stats are high, instead of applying for a student loan or ask your parents to pay for your tuition, you can always opt for getting a scholarship. Scholarships are always granted to people with really high smart stats. It saves you from debt too. 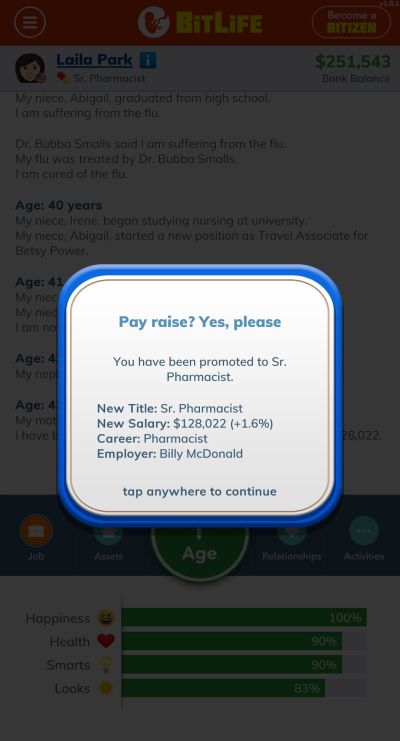 Once you graduate from either biology or chemistry, you need to take up pharmacy school right after. Pharmacy school takes four years to complete. Maintain your stats by studying hard and doing everything to keep them in green. When you’re done with pharmacy school, the junior pharmacist job will appear in the job list. After several years, you’ll be promoted to pharmacist. Then after a few more, you’ll be promoted to senior pharmacist. It’s easy to ask for raises and get promotions, as long as you keep your stats high.

Being a pharmacist is highly rewarding just like other jobs in the medical field. Although it’s not an easy road to take, once you get past all the studying and land that job, you’ll find yourself living a comfortable life. It’s also a much easier alternative to medical school. Medical school costs a lot and requires several years of studying. Pharmacy school only needs four years. Although you won’t earn the same amount as those who studied medical school, a pharmacist’s salary isn’t on the low side. You’ll be earning money a lot sooner rather than spend all those years studying.

How To Become A Cameraman In BitLife

Once you become an apprentice cameraman, after a few years, you’ll be promoted into a cameraman and then as a senior cameraman. Having a cameraman job is rewarding as the salary isn’t as bad, and you don’t need to work as hard as the other career paths since you don’t really need to study hard at all. Raises and promotions also come easily. You can also ask for them if you want, although it isn’t always rewarded to you. If you feel that your raises and salary isn’t enough, you can always look for another job and see if there’s a job opening for the same position you have.

Related: BitLife Careers Guide: How to Become a Business Analyst, Psychiatrist, Biotechnologist or a Stockbroker

Being a cameraman is a great job without having to do much at all. You don’t have to be that smart, and you don’t have to be concerned on what your stats are. However, it comes with a price. The salary isn’t as rewarding as other career paths. As it is in the real world, being smart is always beneficial and will always lead you to a better standing in life.

How To Become An Architect In BitLife

The option to have engineering as a major won’t always come up. But there’s a higher chance for it to appear if you study diligently throughout your elementary and high school years. You must study hard every year from the day you start school until the end of high school. Start going to the library as well when you reach age 12. Do this consistently and your smart stats will go high. If you’re born with low smart stats, you can always start a new life until your smarts stats are high enough. 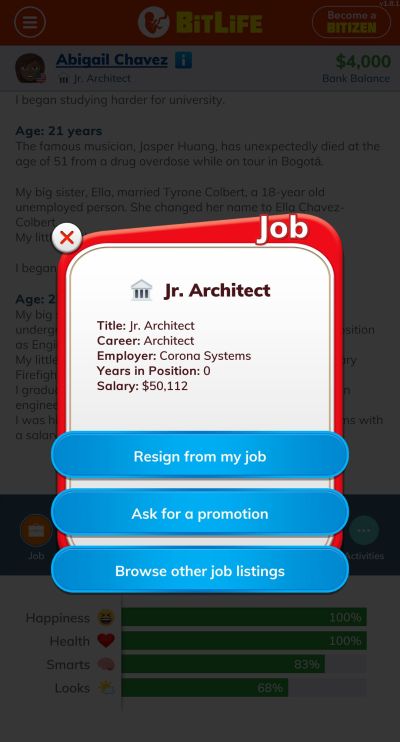 Once you take up engineering and graduate, you can now apply for the junior architect position. This job will always be there as long as you graduate with an engineering major. However, there will be times that you won’t be accepted when you apply. If this happens, you need to get your stats up by going to graduate school, studying hard, and visiting the library. When you’re done, you can check the job listings and try again. You’ll definitely get the job this time around.

The architect career path is really simple. You just have to be consistently smart throughout your life, choose an engineering major, and become a junior architect. What comes next is you’ll be an architect. After a few years you’ll be promoted to the senior architect position. An architect’s salary is decent enough to live a fulfilling life. If you aren’t satisfied, you can always apply to another company or ask for a raise. Going out with your boss and doing team buildings may help in getting that raise or promotion.

In BitLife, being smart will take you places and give you the life you’ve always dreamed of. If you aren’t smart, you won’t earn much. But what’s most important is to live a righteous life no matter what salary you earn. Avoiding temptation is hard, but it’s going to be rewarding in the long run. You don’t want to gamble and smuggle just to get caught. You don’t want to be violent and assault anyone who comes your way, only to lose all your health. You don’t want to be stuck in prison and lose everything you have. As much as possible, avoid everything that you know that might lead to your downfall. Live a righteous life and you’ll live a fulfilling and wonderful life.

We’re now at the end of our BitLife careers guide. We hope that one of the careers above caught your attention and that you’d hopefully try them out next time in another BitLife. Remember all of these guidelines and you’ll have no problem landing one of these jobs. If you have any additional information that might be beneficial to others, feel free to leave a message in the comment section below.

I do this job please

I just want to do this Job

I just want to try new job to change my life style..