Lilith Games’ brand new action card game AFK Arena involves a lot of waiting for rewards to level up your heroes. Still, you should try to advance as far as possible, because the higher stage you reach, the better rewards you get over time. There are some tips and tricks you can employ to progress past levels where your team is overall much weaker than your opposition, this will accelerate your progression, as AFK rewards increase linearly with the stage you reach. So without further ado, we present you our AFK Arena expert guide, with tips, tricks and strategies to help you advancing through the levels as fast as possible.

1. How To Maximize Your Team’s Fighting Prowess

We already talked about how ultimates can be used at strategic times in our AFK Arena advanced guide, but there’s even more to fights. You should keep the “Auto” feature turned off for difficult fights, as you will need to use your ultimate at the right time.

Other than trying to hit as many enemies as possible, for example with Belinda’s Divine Light, you should also avoid to interrupt abilities while they are being cast, or you will have wasted precious time. Examples could be Shemira’s Soul Siphon, there’s little point in interrupting it while it’s being cast, especially if your Shemira really needs the healing. Remember, every other spell is casted automatically when it’s ready, so you want to make sure you can take control of as many actions as you can. 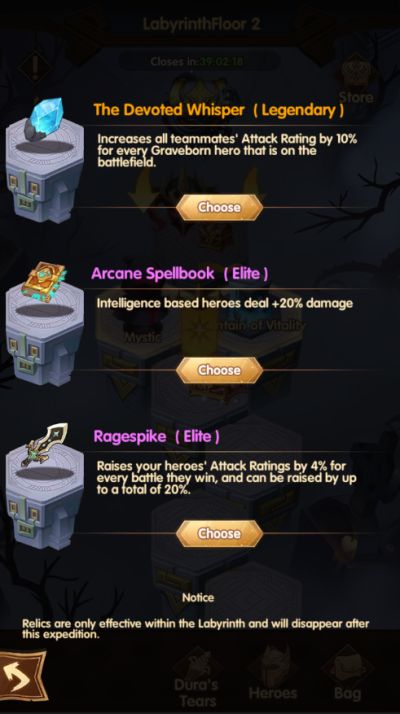 The same goes for the right time to use defensive or healing ultimates: Lucius’ Divine Shield is a terrific spell, but using it right before your enemies’ ultimates is more beneficial than just using it whenever it’s ready, as you risk wasting it on minor spells, likewise, using Nemora’s Wild Wonder when all of your team is at full health is a waste.

Simple swaps of positions can also drastically improve your chances of winning fights, so you should try them, especially if you are losing in close fights. It’s not just about keeping your backline as protected as possible, but also make sure the targeting goes onto your main tank.

For example, I kept losing a stage because the enemy Silvina went onto my weaker tank, Lucius, after slaying one of my mages, simply because he was the closest unit to her, killing him before he could get his Divine Shield off, so I just switched him around with my other tank, who then got targeted by Silvina, allowing my Lucius to cast his ultimate and win me the fight.

Another thing to keep in mind is that when a hero gets a kill their energy is replenished by 200 units, this rarely has an effect in standalone fights, but in continuative modes such as the Arcane Labyrinth it can make it worth to spend an ultimate to clear a fights quicker to avoid taking too much damage, since your hero’s energy will be filled back up again.

2. How To Tackle The Continuative Modes

We already talked a bit about this in our previous guide, but it was just a brief mention. As you well know by now, your heroes don’t fully heal after battles in the Twin Peaks and in the Arcane Labyrinth, but they also get to keep the Energy they got in the previous fight.

This means you can save your ultimates for when the right time comes. This also means that you will need to challenge your approach to fights and how your team is built. After every fight in these two modes, you will be able to pick between 3 relics, each one with their own particular effect. Relics are only active for the dungeon you are currently in, so they disappear when the Arcane Labyrinth resets, or when you finish an adventure in the Twin Peaks.

You should prioritize sustain when it comes to picking relics, as it is by far the most important thing, since you will need your heroes to be in top shape to progress through the dungeons, so try to get runes that grant Life Leech, or that heal your party at the start or at the end of the fight.

There are other relics that are amazing if you get your hands on them, for example, there is a relic that cocoons all your enemies in spider silk for the first 8 seconds of a battle, making them completely unable to act. It is by far the strongest relic you can find, as it gives you so much free time to deal damage, charge up your ultimates, and it also prevents a lot of damage on your heroes.

The Frozen Star is also very good if you have a hero that needs to survive at all costs to get their ultimate off, but tend to die too quickly for their energy bar to fill up in time.
Some relics work great in combination with others, for example Moonstone and Sunstone, or Firebringer and Icebringer.

The relics you get are the most influencing factor in your success in the Labyrinth and the Twin Peaks, so do not worry too much if you fail a run or two, you probably just got unlucky! You can restart an adventure in the Twin Peaks anytime, so just aim for better relics when you retry. Unfortunately, there’s no such a thing for the Arcane Labyrinth, all you can do is wait.

Another factor to consider is your lineup, while pure damage can help you muscle through the regular stages easily, the lack of heals and survivability will reduce your chances of clearing these modes to 0, so make sure to always have a strong healing support like Nemora or Tasi in your lineup when adventuring through the Arcane Labyrinth and the Twin Peaks.

3. Do Not Be Afraid Of Restarting From Scratch

Sometimes all the heroes you get by completing the tutorial (the first chapter) are just bad. If you don’t get a single hero from this list, aside from the guaranteed ones the game gives you, it’s probably best to just start on a new server, with a new account.

Another reason to restart is that you might really want a specific hero on your team as soon as possible. It’s true that you can progress with bad heroes as well, but usually bad heroes are particularly awful early in the game, which will make your progress way too slow. 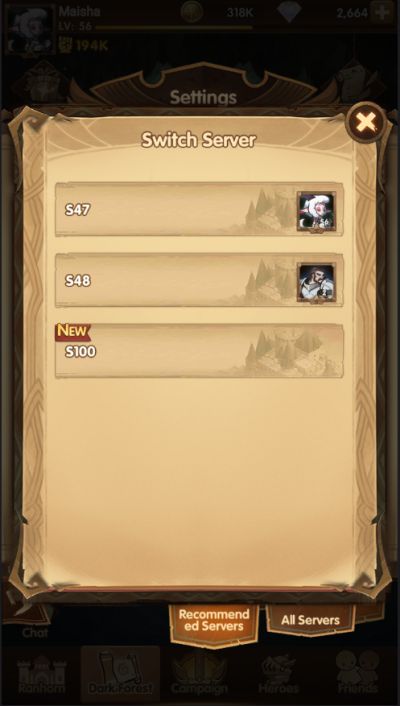 You can fix this issue a bit later down the road, around chapter 4, where you will generate enough resources to make them useful. To get a fresh start, all you have to do is accessing your Settings, by clicking on your avatar, and then tap on “Select Server”.

This way you will be able to select a new server on which you will restart from 0. Don’t worry, you keep all of your progress on the current server, and you can always come back later on if you so wish. When you select a new server, you will have to download some files, and then you will be ready to jump straight back in. Thanks to this feature, you can start multiple accounts and then after some days pick the one with the heroes you like the most, and focus on that one.

We already talked about this, but we are going to go more in depth here. There are many factors that go into picking your lineup, especially for difficult fights.

You need at least a Strength hero, possibly two, to be on the frontline and sponge hits for your damage dealers. Your choice of tanks depends on how much protection your backline needs, for example, if you have Vedan and Shemira in the back you don’t necessarily need an ultra-defensive frontline and can be more liberal with your choice, picking more offensive heroes like Brutus or Khasos, rather than defensive ones like Lucius.

The opposite is also true if you have a backline that really needs protection, for example heroes such as Belinda really need protection to be able to deal as much damage as possible.
Melee Agility heroes can be in either line, but ideally you will have them in the front, as their high Dodge stats allows them to avoid a lot of hits, making them effectively hard to kill, an example of this type of hero is Kaz. 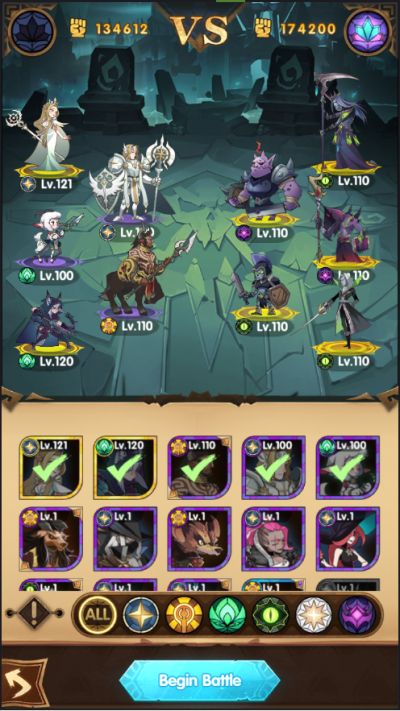 Other Agility heroes, like Silvina and Athalia, teleport behind their target at the start of the fight, so they are more suited to be in the backline, since if you placed them in front they would leave the backline without any cover.

Intelligence heroes should stay in the back no matter what, but there are exceptions to this rule as well.

Shemira can survive in the frontline without many issues usually, as she has a lot of sustain, since all of her spells heal her by a lot. Granted, she won’t survive an assault by multiple damage dealers from your enemy, but provided her level is high enough, you can expect her to live for the entire fight.

When picking a support, you need to prioritize either Crowd Control (CC) or healing. A powerful healer is mandatory when adventuring into the Twin Peaks and the Arcane Labyrinth, but isn’t as necessary in regular fights, especially in PVE.

If you are trying to build a team for PVP, all of the above suggestions still apply, but there are some tweaks you should do to your lineup. It is important to match your opponent in durability, if they have a strong healer, it’s probably a good idea to bring a strong healer yourself, while if they go all out on damage, a healer might not be the best choice, as your units risk dying before getting their heals off.

Heroes that are good in PVE are generally very good in PVP too, although hero synergies matter a lot more in this mode, as you will be facing compositions of similar power to yours, with their own synergies.

Supports with great Crowd Control like Arden or Ferael are very good, and can prove beneficial to any team, since disabling enemies protects your own heroes from taking damage from them, and also makes them more vulnerable, since they will not be able to defend themselves.

You should always try to have the Faction Bonus active, sometimes it’s better to have a slightly worse hero in a position but to get a boost to at least 3 of your party members than have a slightly more powerful unit who doesn’t provide any real benefit to your squad.

Keep in mind that in Arena fights you can’t turn off the Auto function, so your party members will automatically cast their ultimates as soon as they are ready. The same goes for your opponent, so sometimes you will lose or win battle because of RNG.

This concludes our guide on AFK Arena. The amount of content is huge, and the developers keep adding more of it. Chapters, heroes, and events keep getting added, so you will have lots of enjoyment out of the game if you like it. It can get a little frustrating at the very high stages of the game, since you will have to wait days, or even weeks, before actually being able to get past a level, but that’s also the beauty of the game, as you won’t have to spend too much time on it past the beginning stage. If you know of any secret tips or tricks, let us know in the comments below. Until then, happy farming!