AFK Arena is an exciting strategy game from Lilith Games, that involves a lot of waiting for your resources to increase passively. Getting stuck at a level for 2-3 days is perfectly normal, that said, there are some things you can do to smoothen the curve, so keep reading if you are having issues getting past a certain level. There’s plenty of room for improvements in any team. This AFK Arena guide is aimed at more advanced players, in case you have just started out, we recommend checking out our beginners’ guide instead. So without further ado, let’s move on to our compilation of advanced AFK Arena tips, tricks and tactics!

1. How To Approach Difficult Fights

The way you position your characters in AFK Arena influences the course of the battles. It’s not just about having tankier characters on front, but how they are positioned as well. For example, I noticed in a stage fight that my best hero was always getting cocooned by the enemy Ankhira, so, after losing the fight multiple times, I simply swapped him for a more expendable hero, who then got mercilessly cocooned in the following fight, allowing my best hero to freely slay my enemies.

This strategy also works for frontline tanks, based on how valuable their spells are, you might want a character to survive longer, or take more damage to charge up their Energy level faster, so that they can cast their ultimate quicker in a fight, for example, Lucius’ Heaven Protection is an incredible spell that you want charged up as fast as possible in every fight. 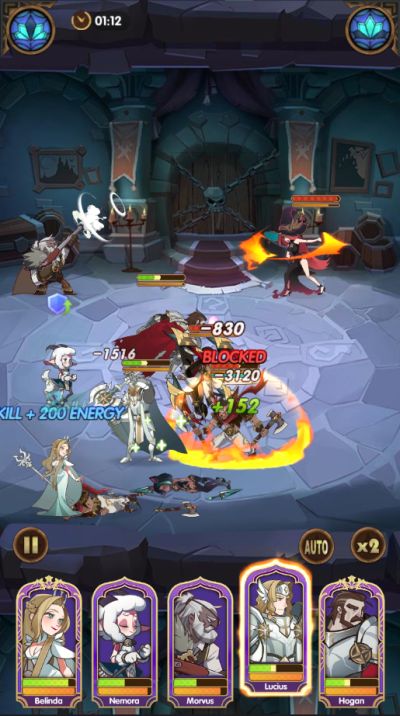 You should also pay attention to the enemy formation, if you reverse the situation I described earlier, you might want Ankhira to disable the most dangerous enemy, and while the AI might not target them every time, you should at least try to match her with whomever you want her to Cocoon. Since battles happen automatically, you might have to retry them a few times before your heroes actually hit the targets you wish, but don’t worry, losing fights costs nothing, so feel free to retry as many times as you please, if you feel you lost the battle due to poor AI behavior rather than lack of power. Another factor to consider is the RNG that is inherent to the fights: critical hits, doge chance, the way the AI selects its targets, are all factors that come into play in fights, which is why you should try a stage multiple times before giving up and change things up.

The auto function is a wonderful feature, as it makes progressing through lower levels without having to pay too much attention, but when it comes to fights against teams of comparable power levels to yours, your ultimate usage is crucial to ensure you have a good fight. Certain spells are best saved to be used at the right moment, for example when your enemies clump up, as this will allow you to hit multiple of them, an example is Belinda’s Divine Light.

This also matters greatly in the Arcane Labyrinth and in the Twin Peaks, as your heroes won’t automatically fully heal after a fight, and their Energy levels won’t reset. You might want to save up your Nemora’s Wild Wonder for the harder fights ahead of you instead of using it automatically when it’s ready, same goes for every other spell, both defensive and offensive, there’s little point in using Shemira’s Tortured Souls in the late stages of a fight you are winning comfortably, it’s better to save it up for the next fight.

2. How To Spend Resources Wisely

It’s not obvious at the start of the game, but when you start reaching level 81 – 101 on your character it becomes apparent that Hero’s Essence is the most important one you need. You need 1200 Hero Essence to level up a hero from level 100 to level 101, and there’s no real way of farming it quickly.

The best way of getting Hero Essence is by purchasing it every day in the Store, you can buy 100 units for 500k Gold. You should this every day. To put things in perspective, you will need 118.100 units of Hero Essence to level a hero to the maximum level of 240. 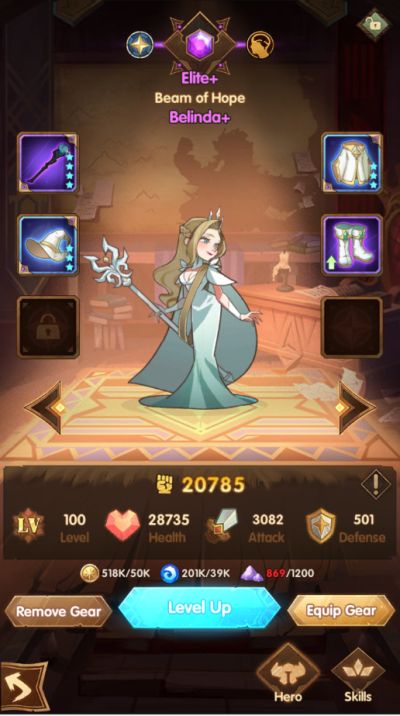 Speaking of the Store, do not get tempted by the Equipment you find in it, Diamonds should be saved to summon additional heroes, as ascending them at the Temple of Ascension gives them a huge boost.

If you really feel like you need to upgrade your equipment, the best way to go about it is to go through the Arcane Labyrinth and see if you can meet the Wandering Trader, you will be able to purchase Equipment at a heavily discounted price from him (up to 40% off).

The same goes for Hero Coins and Labyrinth Coins: save them up for the guaranteed Elite Hero Summons, and Hero Essence, everything else is a waste of resources.
Fast Rewards and consumable items should also be used at the latest possible moment, since the amount of resources you get from them are based on the stage you are currently at.

Trying to level up everyone at once is a surefire way to lag behind. You simply cannot afford to have an evenly leveled team past the early game. My suggestion is to level up your heroes up to the point where their spells level up, which boosts all of their spells. This happens at level 11, 21, and from then onwards every 20 levels, and then see where to go from there.

Get all of your members up to level 41, then get a couple of them to level 61, and see how far you can progress with them.

Certain heroes are incredibly powerful at winning fights by themselves, as long as they are higher level than the opposition, be it because of their damage output, like Brutus, or because of their elusiveness and sustain, like Vedan. 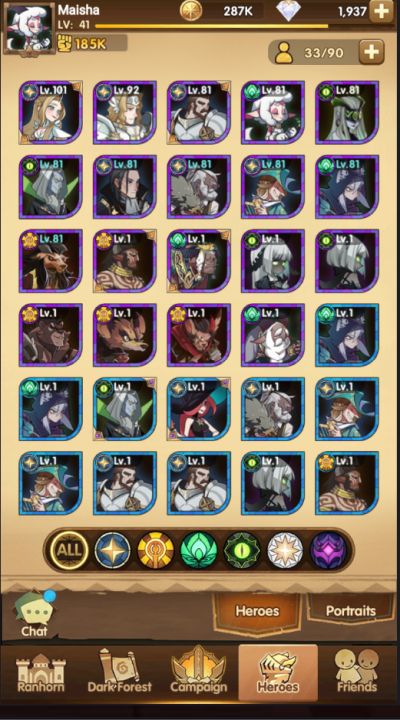 A factor to consider when choosing what hero to level up is their behavior in battle. Having a very high-level support hero is not of much use if the rest of your team can’t make up for the lack of damage, or if they die too quickly for the support’s spells to have any impact. Generally, it’s a good idea to empower a strong damage deal who’s going to stay in the back, and the character that is going to stay in front of him, to make sure he is protected.

Ideally you always want at least 2 heroes that are high level compared to the rest of your squad, one in front and one in the back. The reasoning is that you want your strongest backline hero to be as safe as possible from harm. You can use your weaker heroes as a meat shield for your strongest ones.

You always want 5 heroes leveled up decently at any point of the game because of how the Resonating Crystal works, which is what allows you to experiment new lineups without spending a fortune in Diamonds to reset your heroes.

4. Ascend Heroes As Often As Possible 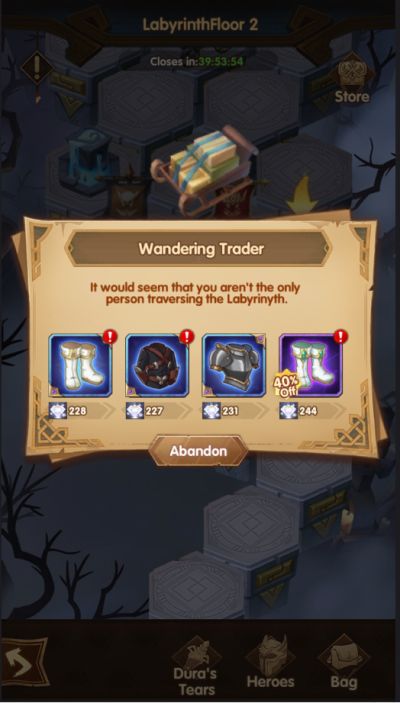 Basically, you will need to summon a lot of the same hero to level it up, and you will also need a lot of other heroes of the same faction, combine them, and then feed them to the one you’re ascending.

Related: AFK Arena Expert Guide: How to Advance Through Stages as Fast as Possible

Another currency that will help you in your quest of ascending heroes is Faction Scrolls. You get these by participating in events, and using them grants you a higher chance of summoning heroes of a specific faction. The faction that receives this boost rotates every 24 hours; you can check what faction gets this summoning boost in the Noble Tavern.

You can find loot after completing a stage, you can buy it from the regular Store and the Wandering Trader, you can get it from AFK Rewards, or you can get it as a reward in chests you find in the Arcane Labyrinth or in the Twin Peaks.

There are various tiers of loot, based on how powerful it is, the tier of a piece of equipment also determines how many times you can power up said item. Grey and Green items are the most common, and aren’t worth much, unless you are just starting out. Blue and Purple items are the most powerful, and can be further improved by enhancing them. 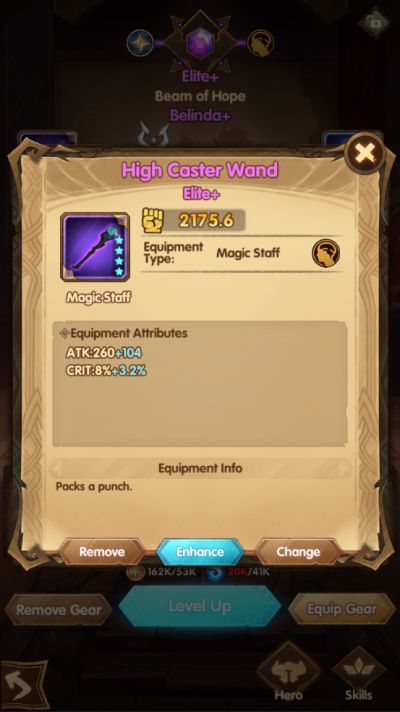 In order to enhance your gear, you will have to melt other pieces of equipment, you will get a certain amount of points, based on the level of the item you are melting, once you get enough enhancement points, the item will level up. This process destroys the melted items, and also costs gold. The number of points needed is based on the tier of the item you are enhancing, the higher the tier, the higher the cost.

Items have restrictions: they can be only worn by people of a certain attribute (strength, agility, or intelligence), and some of them also have faction restrictions. If you have built your team carefully you will have gear that you don’t need and can get rid of without problems.

Certain pieces of equipment are better suited to specific heroes, for example, items that improve the Dodge stats are way better on melee heroes than ranged heroes, because they are going to be in the thick of combat, which means they will be attacked more often, thus making the Dodge stat more valuable on them.

And this wraps up our second guide for AFK Arena. We hope you liked the tips, tricks and tactics we shared in this guide. In case you know additional tips that we should included in the guide or just want to share your thoughts about the game with us, feel free to drop us a line in the comment section!