AFK Arena is a casual action card game developed by Lilith Games. It features a rich roster of 45 heroes, beautiful hand drawn graphics, and plenty of dungeons to explore. New content is continuously getting added by the developers. The objective of the AFK Arena is to develop the most powerful team in order to clear as many dungeons as possible. When you get stuck in the progress, you will have to dedicate your time towards improving your party’s levels and gears, or summon additional heroes to help you fight the enemies.

As the name suggests, the game largely revolves around waiting. Most of your income in terms of Gold and Experience will come passively, all you have to do is progress through the dungeons to raise the amount of AFK Rewards you get every minute. If you want to make quick progress in the game and build a powerful team in order to defeat the evil forces then be sure to read our AFK Arena beginner’s guide for some useful tips, cheats and strategies!

1. Power Level Is Not All That Matters

Every hero has a power level, which roughly indicates how strong they are. But being strong isn’t all there is to winning battles. Certain units might be weaker than others in a vacuum, but there’s many other factors to consider when in a battle.

Bringing multiple heroes from the same faction gives them a boost to their Attack and HPs based on how many of them are in your party during the fight, the more you have, the higher the boost. You can check what boosts are active in the battle screen, by tapping on the icon on the top left corner, next to the timer, you can also check what additional boosts you’d get by running more units of the same faction. There are extra boosts available by running Hypogean heroes. 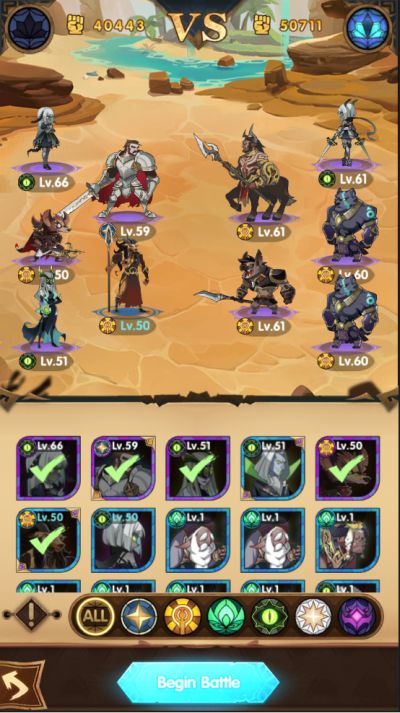 This information helps you weighing whether or not you can clear dungeons even if your power level is lower than the enemies’. You can check your hero’s faction and what they are strong and weak against in the Heroes tab, by tapping on the icon to the left of their rarity level.

Additionally, every hero has different abilities, and these spells’ effects can easily change the outcome of the battle. For example, Isabelle has a spell called Soul Power that lets her drain an ally’s HPs to charge up her Energy, which will allow her to cast her ultimate ability much sooner than usual, allowing her to deal massive amounts of damage at the expense of one of her allies’ health. Some heroes have access to healing spells, some of them, like Nemora, can even turn enemies against each other.

Lastly, there are elements of randomness in every fight. Heroes can cause critical hits, which will massively increase the damage they deal, they can dodge attacks, or they may have the ability to leech life with their attacks. You can check all of these stats by tapping on the exclamation mark on the right of your hero’s power level. You can also check every hero’s spells in the Portraits section, as well as their stats when maxed out. This section will tell you other miscellaneous information such as the hero’s max stats, you will also be able to test the hero at maximum power.

2. Do Not Be Afraid Of Experimenting

Leveling up heroes gets expensive really quick, but there are a lot of cushions in case you aren’t happy with the results of your work. For example, if you aren’t satisfied with the performance of one of your heroes, and would like to try out a different one, but don’t have the resources to, all you have to do is head to the Rickety Cart in Ranhorn. There, you can select any of your heroes you have leveled up, and reset them to back to level 1, getting back all the resources expended on them, at the cost of 20 diamonds. In the Rickety Cart you can also retire common heroes, which will give you Hero Coins that you can exchange in the Barracks store for Hero Soulstones. 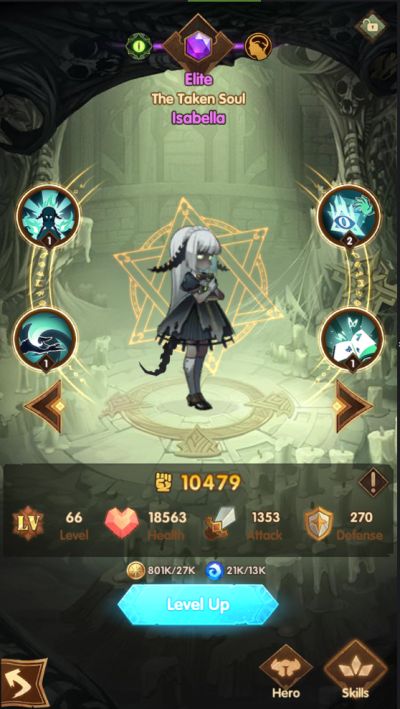 Losing battles costs nothing, so do not worry about trying out new heroes in dungeons, to see if you like them. The game also gives you more avenues to bring up different heroes up to speed with the others with the Resonating Crystal, which will bring heroes you select to the same level of the fifth highest leveled hero you know. The only times where you shouldn’t be experimenting is the Arcane Labyrinth, since damage there is permanent, and in the Arena, since playing in it costs tickets.

3. Stuck At A Level? Try The Other Activities

As the name implies, the game is all about passively acquiring resources to make your team stronger and progress through the dungeons. Getting stuck is perfectly normal, all you need to do is wait a day or two for the AFK Rewards to kick in, and boost up your team that way. There’s still plenty of content to explore aside from the main story, and all of the extra places give you additional gold, experience, and diamonds, you can access all of them from the Dark Forest screen.

The Arcane Labyrinth is a special dungeon with 3 floors, it resets every 48 hours, and it has special rules. It is structured as a grid, and you can only visit one tile each round, when you select a tile, all the adjacent ones disappear, so you will have to pick your path carefully, you don’t want to miss out on certain things. Your party does not get fully healed after every battle in this mode, you have to visit the tiles with a fountain of healing in them if you want your party’s health pools to get restored. Each tile can also contain an abandoned cart which will give you access to a new hero you can only use on that specific labyrinth run. You can also gain relics after a fight, relics are specific items that are only available during your labyrinth run, and give great bonuses to your party. Clearing labyrinth battles gives you labyrinth coins, which can be exchanged at the labyrinth shop for new heroes, gear, or hero essence. 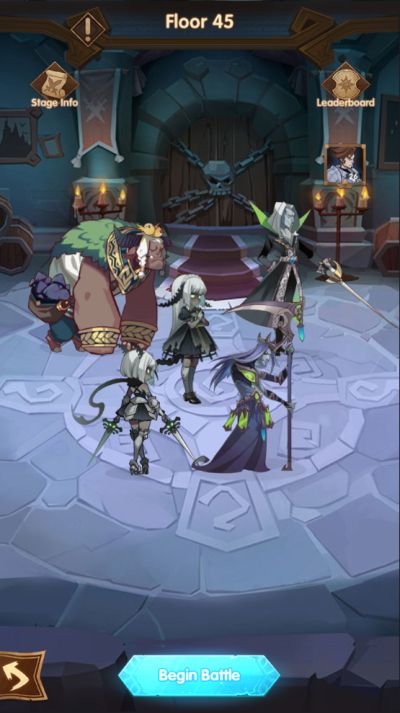 The King’s Tower is a tower with 300 floors with extra rewards, and it has a leaderboard so you can see how other players are faring in it. The King’s Tower does not have any other specific rule to it, it is just a collection of additional dungeons. The levels scale linearly, so if you get stuck just progress in the game and come back to it once you can clear it easily.

The Arena of Heroes is where you face other players’ teams, the first two access every day are free. Winning earns you ladder points, while losing makes you lose some, based on the points difference between you and your opponent. A season in the Arena lasts two weeks, at the end of each season players who participated will earn rewards based on their overall ranking, players also receive diamonds each day based on their ranking.

The Bounty Board is a place where you send your units, and your friends’, to do missions for you. The missions are completed automatically, and you can still use your heroes to clear dungeons while they are on a mission, you just have to select the required heroes and the game will take care of everything else automatically.

Lastly, the Peaks of Time are adventure puzzles where the goal is to find all of the treasure chests on the map. You can find two types of chests in there: gold and crystal chests, the crystal chests can contain powerful artifacts, a type of gear that you can equip on your hero, like every other piece of equipment. You will need to find a certain amount of crystal chests to progress on the next adventure.

4. Clear All The Daily And Weekly Quests

Completing quests earns you quest points, which unlocks even more rewards. You can secure yourself additional diamonds and hero summons every day just by doing the daily quests, both of those resources are very important when it comes to progressing through the game. 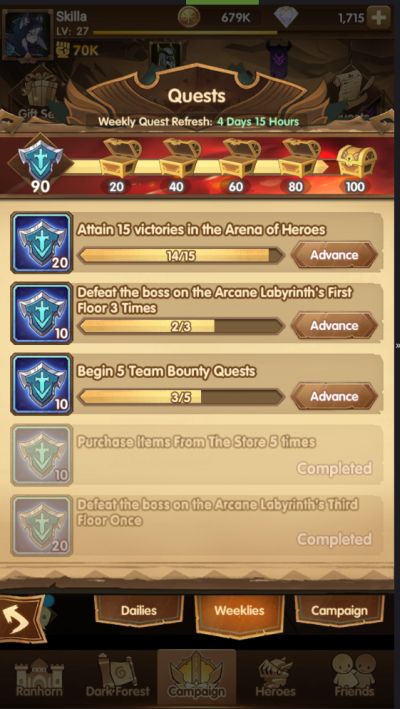 You can easily do enough daily quests in a short amount of time to unlock the last chest of the day, so prioritize that. Weeklies also won’t take up too much of your time as long as you play the game every day. Campaign rewards are simply earned by playing the game.

It is important to do as many quests as you can, since they will get you a good amount of diamonds and hero summons, the most important resources in the game, since diamonds let you acquire additional heroes, the more heroes you get, the more chances you have of improving your party. Diamonds are also needed to reset your heroes to their original status to get the resources you spent on them back, and are also needed to use the Fast Forward for the second time every day, netting you additional gold and experience.

Related: AFK Arena Expert Guide: How to Advance Through Stages as Fast as Possible

Do not forget to login at least once every 12 hours. You can only store uncollected resources for 12 hours, everything more is lost forever, and thus wasted.

5. All The Currencies And How To Get Them

The game has a lot of currencies, and it gets confusing at times. First, you have Gold, Experience, and Player Experience, which are the resources you get by clearing dungeons, quests, and missions at the Bounty Board, they can also be earned as AFK Rewards. Gold is used to level up heroes and purchase goods at the Store, Experience is needed to level up heroes, and Player Experience only matters for your Player Level, which does not matter that much, you earn 10 diamonds for each player level. 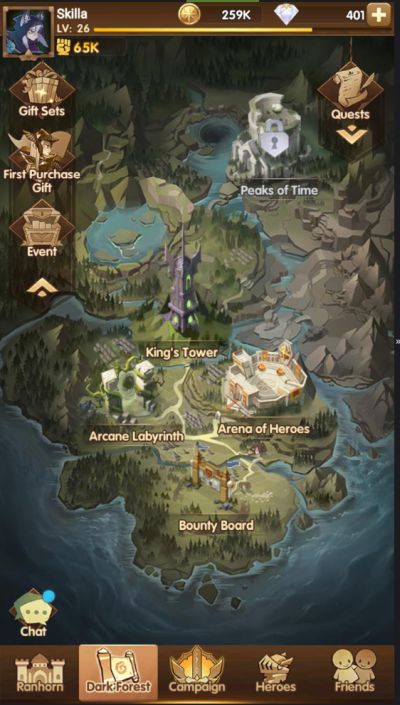 Hero Coins are gained by retiring heroes at the Rickety Cart, you can spend them in the Barracks. Labyrinth Coins are earned by clearing the Arcane Labyrinth, and are spent in their respective Store. Guild coins are earned by joining a Guild and participating in the Guild’s activities, they can be spent in the Guild Store. Hero’s Essence can be earned by retiring heroes, clearing dungeons, or as AFK reward, and it’s used to level up heroes past certain levels, when leveling up involves boosting or learning a new skill.

Arena Tickets are used to fight in the Arena of Heroes, you can purchase them at the store, you can also get them as quest rewards. Lastly, there are the Crystals you spend to unlock extra slots in the Resonating Crystal, and can be found by harvesting AFK Rewards from Chapter 5 onwards.

This wraps up our beginner’s guide for Lilith Games’ latest action card title AFK Arena. What’s great about this game is that you don’t need to spend that much time playing it after the first two or three days, but it is still very rewarding to see your heroes improve and defeating stronger dungeons. The PVP mode gives the game an insane amount of longevity, and the dungeons are so many the game will keep you busy for a huge amount of time. Also, you can always restart from scratch and with different units simply by switching servers, so don’t be afraid to do that if you want a fresh start. If you found any other useful tips, tricks or strategies, make sure to let us know in the comments. Happy farming!