From the creators of the smash hit Nonstop Knight comes a new idle clicker game that breaks away from the typical format of the genre. Flaregames’ new mobile title, Tap Empire, is a tycoon type of game that switches things up by splitting the game into levels and areas instead of one monotonous loop of the same menus. The game puts you in the shoes of an inventor extraordinaire. After working hard to create robots for Mr. Bossworth, he proceeds to fire you and inform you that he will work your bots to the ground. Determined to save your precious creations from abuse, you decide to beat Bossworth in his own game by starting your own shops to rival his.

Unfortunately, the world of business is not a forgiving one. Kicking Mr. Bossworth out of Kim’s VIllage is only the beginning of your troubles. There are more shops to build and more rivals to take down. Don’t worry, we will help you along the way, as we have come up with a Tap Empire guide, that comes with some cool tips, tricks and cheats!

1. Open The Toolbox Of Infinity 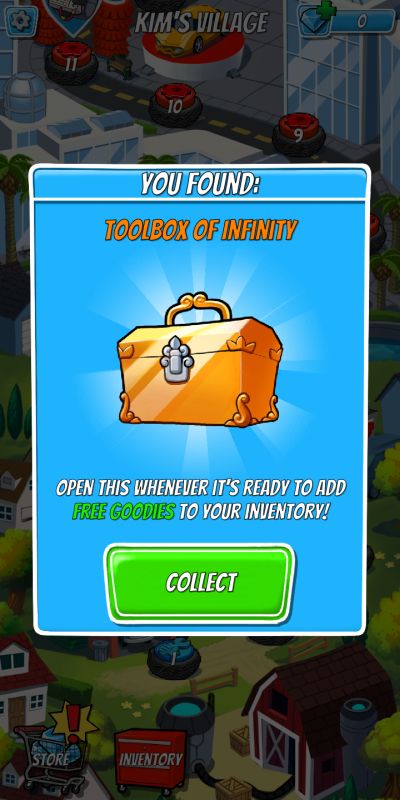 One of the magic items that you will unlock early on is the Toolbox of Infinity. It is an orange toolbox that gives you a reward every 7 hours. Make sure you log into Tap Empire every 7 hours to claim your reward because the timer will not restart until you claim your current prize. You can find the toolbox on the top right side of the main map. The timer can also be seen right below the toolbox icon, so you will know how much time is left before the next reward can be claimed. Toolbox rewards includes gems and boosts, so it is a great way to stock up on both!

2. Use Your Boosts Wisely

You can level up your shops up to the cap indicated on the green arrow icon. Every time you level up your shop, it makes more coins. On top of this, you get an even bigger bonus every ten levels. That means you should prioritize hitting that tenth level for each shop instead of upgrading all of them equally. Try to prioritize leveling up one shop at a time so you can get the milestone bonus before moving on to the next shop. 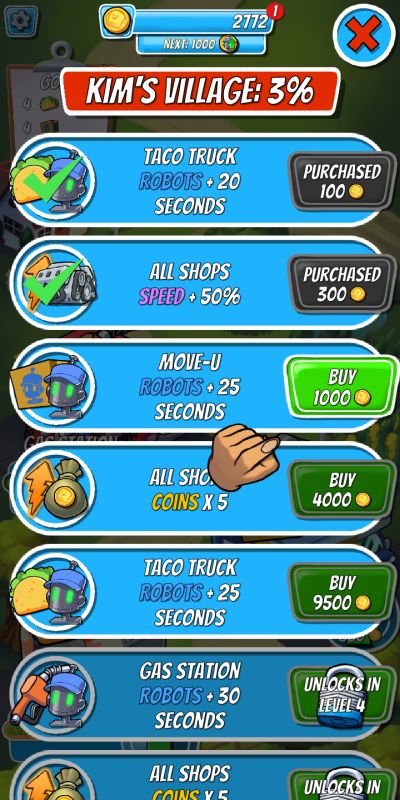 When you tap on the bar at the top of the screen, you will be able to see the list of upgrades. Some upgrades affect individual shops while others affect all your shops. Make sure you maintain a balance of purchasing upgrades and leveling up your shops in order to maximize your progress. Upgrades you purchase will carry over to the next level of the same area, so it will still be useful even after you complete all the tasks of the current level. If you can, try to unlock the upgrades that will automate production in your shops. This will make it a lot easier for you to earn money without having to constantly tap on your screen.

5. How To Win Business Duels

Business duels will pit you against another businessman and your goal is to complete all the goals within the time limit. This is the equivalent of a Boss Battle in the game and succeeding will unlock the current area’s endless mode. That means you will be able to earn as many coins as you want in that area. You cannot use the money you earn in one area to buy upgrades in another, but you can spend it towards completing achievements which we will discuss later on. 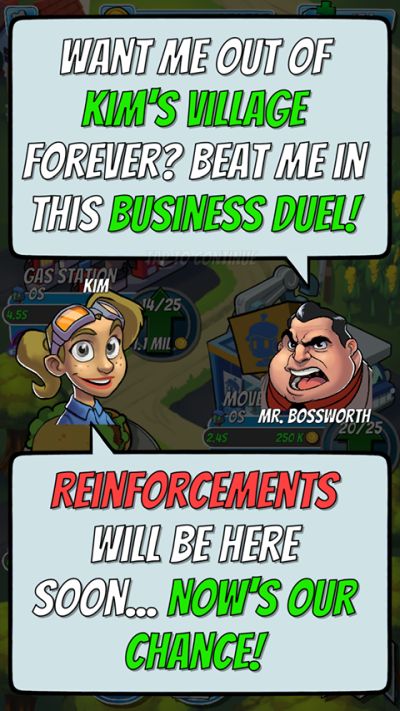 The first business duel will be against Bossworth at level 6, and you will be given 24 hours to complete the tasks. Don’t worry because it’s pretty easy and you will probably be able to complete it in 10 minutes or less. Just focus on achieving the targets as soon as possible. Tap on an upgrade whenever it becomes available. Not only will it bring you closer to completing your targets, you also earn money faster. You will have the option to buy more time by spending gems. Try not to do this until you are sure you will not make it on time. Gems are the premium currency in Tap Empire and they are hard to come by. It is better if you don’t squander it when it is still possible to win a duel without buying more time.

Achievements can be found in the same menu as the upgrades. When you scroll down, you will notice that there are golden items in the upgrades list. These are the Achievements that you can unlock in the current area. Every Achievement you unlock will reward you with a star. Once you get all the stars in an area, you will receive major rewards.

7. Spend All Your Magic TV Chances

When you hit level 9, you will be introduced to the Magic TV. This is a special item that allows you to get boosts and freebies in exchange for watching a video advertisement. You can watch up to 12 ads per day, so use them all. Watching an ad within a level will unlock a random boost for a random shop. The boost carries over to the next level of the current area as long as there is still time remaining, so don’t worry too much about consuming your Magic TV chances in earlier levels. You can also watch multiple ads in a single level as long as you still have remaining videos for the day. That means you can potentially fill up all the boost slots for your shops in a single area.

8. Move On To The Next Level

When you play in a non-endless level, you have the option to stick around and continue earning money for upgrades by simply not completing one of your tasks. While this may sound like a good idea, it isn’t really worth it. Each new level has a higher maximum shop level than the last one. That means you have a higher earning potential in the next level even if you spend the same amount of time. Don’t linger in the same level for too long even if you are close purchasing another upgrade. You will be able to carry over your money to the next level of the same area anyway, so you can purchase it then. 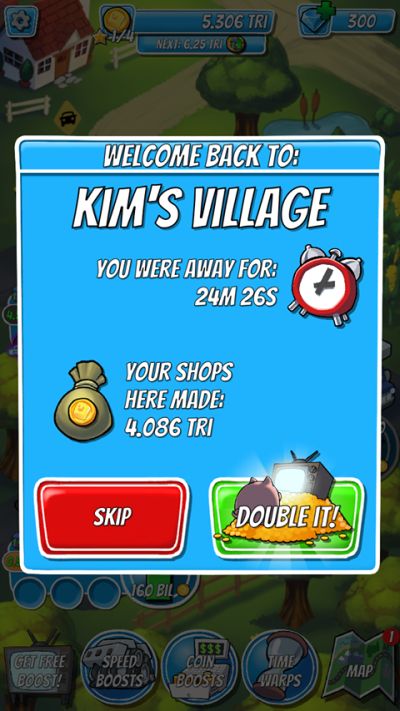 As you proceed through the levels, make sure you don’t forget about the previous endless levels that you have unlocked. The game does not have overall offline earnings, so you will need to return to the endless levels to claim the money your shops made while you were away. The good news is that these shops continue to earn even if you are just playing the other levels. When you go back to them, you also have the choice to watch another video advertisement in order to double whatever you earned while you were away. Make sure you take advantage of this as much as you can in order to maximize your earnings. Don’t worry because this won’t consume your Magic TV chances for the day, so you will still be able to use those for getting boosts.

When you get your second star in Kim’s Village, you will be able to unlock the Tech Workshop. This is where you can activate permanent upgrades for your shops. The upgrades here do not cost anything but time. You can spend gems to speed up the upgrade process, but that would be a waste when you can just wait. At first, you will only have access to speed upgrades for each of your shops. You will need to unlock more stars in order to access the other upgrade types. Don’t worry because you will have plenty to upgrade under the speed category.

The first upgrade you make will always last one hour. The time it takes to upgrade will increase for each level. It is best if you queue up the short upgrades during the day, so you can return to it and queue up another one as soon as it’s finished. For example, queue up the one-hour speed upgrade for the Taco Truck then come back later to queue up the one-hour speed upgrade for the Recording Studio. This way, you are able to complete more upgrades during the day. You can then queue up the longest upgrade at night when you are about to log off before bed time.

11. Participate In Events For Rewards 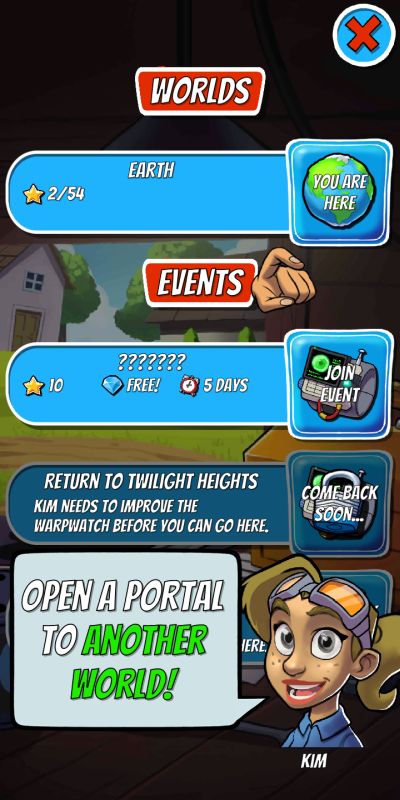 After completing level 11, you will gain access to Events. You will warp to another dimension and play a series of levels within the allotted time. Events usually take several days, so you will need to go back and forth between Earth and the alternate dimension. While it does take a lot of work, you stand to win a lot of gems and other rewards depending on how far you progressed. You will only have access to one alternate world in the beginning. More worlds and events will become available when you progress further in Tap Empire. Make sure you take time to participate in these events in order to get more rewards. Also, since there is more at stake in these alternate levels, feel free to use up all your Magic TV charges to help you progress further in the limited time that you have.

12. Charge Up The Golden Rims

When you defeat Bossworth a second time, you will unlock the Golden Rims. These are magical items that will boost the coin production of all your shops. First, tap on the Golden Rims at the top right of your screen. Hit Activate and you will be asked to choose one of the four rims. The one you choose will determine how much of a boost you will get. You can then repeatedly tap on the button to charge up the bonus for up to three hours. If you are lucky enough to get the highest possible boost, try to keep it alive by remembering to recharge the bar before the three hours are up. 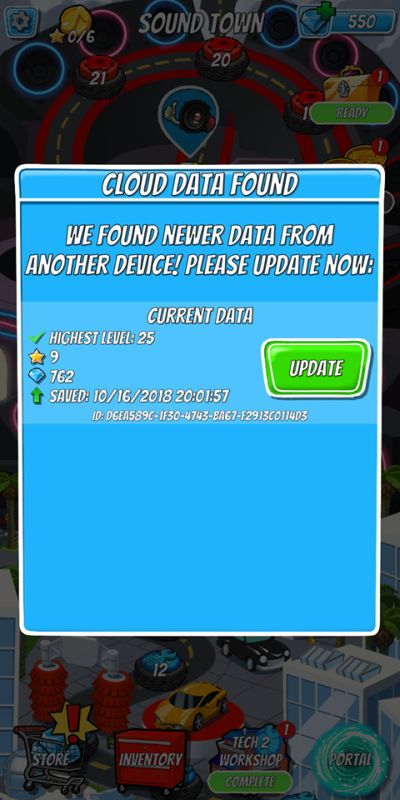 If you are connected to the internet, Tap Empire will attempt to link to your Google Play account. Make sure you agree when it prompts you. Doing so is the only way to recover your progress if you happen to lose your device. This will also allow you to continue playing on a different device if your current one runs low on battery. The game will show you the stats of the latest uploaded save and will ask you if you want to load it. Once in a while, you will get an error where the game is stuck in an update loop. Do not panic when this happens. Simply exit the game completely, clear it from your recent apps, then relaunch it. The game should update without any problems then. To ensure that your game progress is properly uploaded, always use the back button to exit as it will ask you if you want to save.

It is time to save the robots from the abusive Mr. Bossworth in Tap Empire! Remember our tips and tricks listed above and you will be dominating every town in no time!

What happens if I lose a battle against Bossworth?