The aptly named game developer King shows no signs of slowing down as it continues to dominate the match-3 puzzle genre six years after it first released Candy Crush. The company’s latest match-3 puzzle called Candy Crush Friends Saga has quickly garnered top ratings as it brings a new twist to the now-iconic series. Available on Android and iOS, the game still follows the general format of its predecessors. There are a series of levels that you need to complete, each one more difficult than the last. What’s new in this game, however, is that you get to collect your favorite characters. Not only do these characters create boosters, you get to dress them up in the sticker book for some added fun! There are also a few new game modes where you need to dunk the cookies or free your animal friends. You have hundreds of levels ahead of you, so make sure you are ready to take them all on. Read our Candy Crush Friends Saga cheats, tips and tricks to find out how to complete all the levels!

While crushing a lot of candy can be fun, it is useless if you end up failing a level. Pay attention to the goal tracker found on the upper left corner of the screen. You are only given a limited number of moves to complete those goals. If you run out of moves, you will have to start over and you will also lose a life. Since there are several new game types, make sure you familiarize yourself with all of them and strategize accordingly. 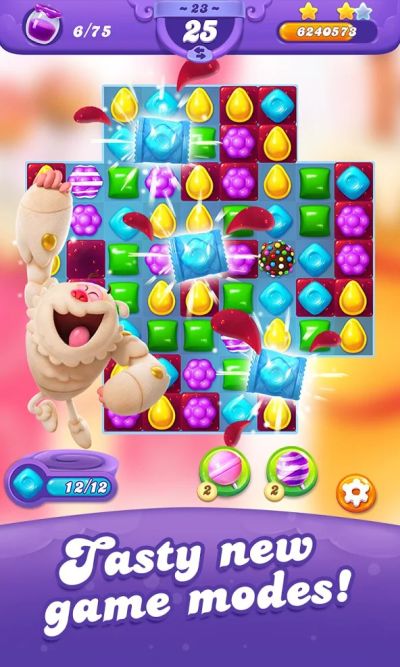 The first objective type is Free the Octopuses. In this mode, you will have octopi stranded under some type of obstacles. You will need to make matches beside these obstacles in order to set an octopus free. Another objective is called Find the Animals. Here you will have to crack ice tiles that are covering your animal friends by making matches on top of them.
The third objective type is Spread the Jam. This time around, your goal is to cover the board with as much jam as required. Dunk the Cookies, on the other hand, will require you to make matches in order to clear the path for the cookies to drop below the board. Finally, the Collect the Hearts mode will have you creating matches in order to fill heart-shaped molds. Once they are full, the level is complete.

2. How To Make Special Candies

Special tiles or in this case, candies, are the lifeblood of any match-3 puzzle game. You cannot progress far if you don’t create and use them often. In fact, some levels are simply impossible to complete without special candies. With that in mind, we have listed the different special tiles available in the game and how to create them.

Fish Candy – The fish candy is one of the most common special tiles you can create. You just need to combine four matching candies in a square to create it. When you match the fish tile with two or more candies of the same color, the fish will destroy a random tile on the board.

Stripe Candy – This is another common special tile that can be created with four candies. Instead of a square, you need to form a row or a column. Matching a stripe candy will clear and entire row or column depending on how it was made.

Bomb Candy – As the name suggests, the bomb candy blows up surrounding tiles when you match it. It also explodes a second time after a second, taking out even more tiles. You can create a bomb by combining five candies in a T or L shape.

Color Bomb – This delicious-looking chocolate ball is created by combining five candies in a row or column. Swapping it with another candy will eliminate all instances of the same candy on the board. Color bombs are hard to come by, so make sure you use them to take out as many candies as possible. Quickly analyze the board to see which colors are most dominant and target those if you can.

Special Bomb – A special bomb is created when you combine six candies in a T or L shape. Make sure you use this one carefully because it can mess up your succeeding moves. When a special bomb is created, it takes on the color of the candies that were used to make it. Swapping it will turn random tiles into the same color.

3. Use The Right Candy Combination

Now that you know how to create special candies, it is time to mix and match them for some awesome combos. When you combine two special candies, their effects merge into a stronger one, helping you accomplish your goals more quickly. Check out the list of candy combos below, so you have a better idea of which ones to use in your games. 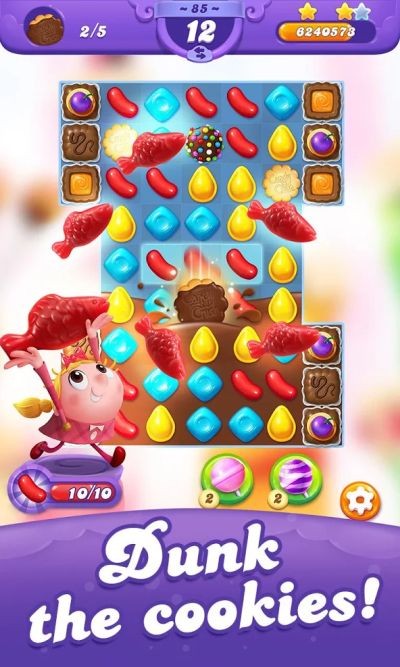 Fish + Fish – Two fish candies combined defies the laws of math and results in three fish tiles that swim to random locations on the board. Even though there is no way to predict where they will go, the removing that one extra tile could result in additional matches.

Stripe + Stripe – Instead of just removing one row or column, two stripe candies combined will result in a cross-shaped destruction regardless of their original stripes. That means even if you combine two column stripes, it would still result in a cross explosion.

Bomb + Bomb – Two bombs combined will create an even bigger explosion and will clear candies within their radius twice.

Color Bomb + Color Bomb – Instead of removing all instances of one type of candy, two color bombs combined will send a lightning bolt to all candies and clear them one by one.

Fish + Stripe – The fish will swim to a random location then clear the column or row there. The explosion will still follow whether the stripe candy was created with a row or a column.

Fish + Bomb – After swimming to a random location, the fish will explode with a bigger radius than the normal bomb candy.

Fish + Color Bomb – All tiles that have the same color as the fish will also turn into fish candies. They will then all swim to random locations and destroy one tile each.

Stripe + Bomb – A huge cross-shaped explosion will occur, and it will span three columns and rows, destroying everything in its path.

Stripe + Color Bomb – All tiles that have the same color as the stripe will turn into stripe candies. They will then all demolish their respective columns or rows depending on the position of their stripes.

Color Bomb + Bomb – All tiles that have the same color as the bomb will turn into bomb candies as well. They will then all explode, taking out surrounding tiles.

Color Bomb + Special Bomb – These two combined will clear the entire board at once, which almost always results in completing whatever level you are on.

As we mentioned earlier, Candy Crush Friends Saga allows you to collect characters in your sticker book. These characters have unique abilities that will help you complete your missions. You will be asked to choose one character to bring along at the beginning of a level. The game will usually recommend someone, but you should still consider the goals of the level and check if there is a better character for the job. For example, Tiffi adds three fish candies on the board whenever you clear 10 red tiles. If you will be aiming for red tiles, anyway, you may as well bring her along. In a similar fashion, the Yeti adds a bomb on the board when you clear 12 blue candies. It can help you move things along faster if you are clearing blue tiles anyway.

To unlock more characters, you will first need to collect a specified number of stickers. These can be acquired by opening gift boxes. You can find one on the board every five levels. Clear all the tiles around the gift box before completing the level. The box will be opened once the level has been cleared. The game also gives out daily rewards that include stickers, energy, boosters, and costumer stickers. One thing you should keep in mind, though, is that costumes are purely cosmetic and have no impact on a character’s abilities.

5. Wait For The Hint 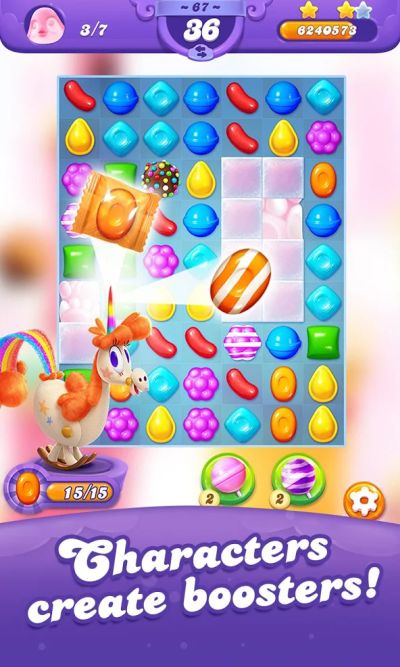 Since most levels usually do not have a time limit, there is a trick you can rely on to help you when you are stuck. Just stay idle for a few seconds and watch the board carefully. Your chosen companion will show you a possible match. More often than not, he will suggest a match that will result in a special candy. While this won’t always mean you will solve the puzzle, it is a helpful hint when you are absolutely out of ideas.

Similarly to the previous incarnations of the Candy Crush series of games, in Candy Crush Friends Saga you can have a maximum of five lives. You lose one every time you fail a level. Once you are out of lives, you will need to wait for it to recharge, or you can buy more. There are hundreds of levels in the game, and you will most likely need the money in higher levels. Instead of wasting currency on recharging lives, just wait for it to regenerate. Taking a break once in a while isn’t a bad thing. In the same sense, you should also avoid spending money to continue after you run out of moves. Save this as a last resort if you have been stuck on the same level for a while and you are just one or two moves away from finally succeeding.

Match-3 puzzlers are notorious for ramping up in difficulty fairly quickly. Remember everything you learned from our Candy Crush Friends Saga cheats, tips and tricks listed above and you will be clearing levels with ease!

Needed some he.p with hearts. Can't figure out the strategy. Also do you program forbRight or left handed players????

When collecting stickers, what does the candy stickers do and how do you find them to retrieve or use them?