It hasn’t even been that long since NetEase released Cyber Hunter, and now the gaming giant has just released another battle royale game for mobile devices. Super Mecha Champions is the company’s latest entry in the genre, and it comes with a major twist. Available on Android and iOS platforms, the game take combat to the next level by introducing mecha robots into the battlefield. Players not only get to fight as their human avatars, they can also summon giant robots to fight on their behalf.

There are different types of mecha available in Super Mecha Champions, each with its own strengths and weaknesses. Do you choose a flying robot that rains bullets on enemies from the sky, or a tanky mech that soaks up all the damage like it’s nothing? It all depends on your playstyle. All that matters is that you need to be the last man standing in order to win. That’s where our Super Mecha Champions beginner’s guide so read on for some useful tips, cheats and strategies to crush your enemies!

If you have played other battle royale games before, you probably know the struggle of having to know the difference between an AK47 and an M416. They’re both assault rifles but they work very differently. This game keeps things simple by doing away with those fancy names. The only thing you need to take note of is the weapon category. The only variation within each category is its rarity. The higher the rarity, the better the weapon will be in terms of damage and ammo capacity. The same is true for any other loot like armor and mech modules. That’s it. No fancy names to memorize. Check out the list of weapons below and what they do. 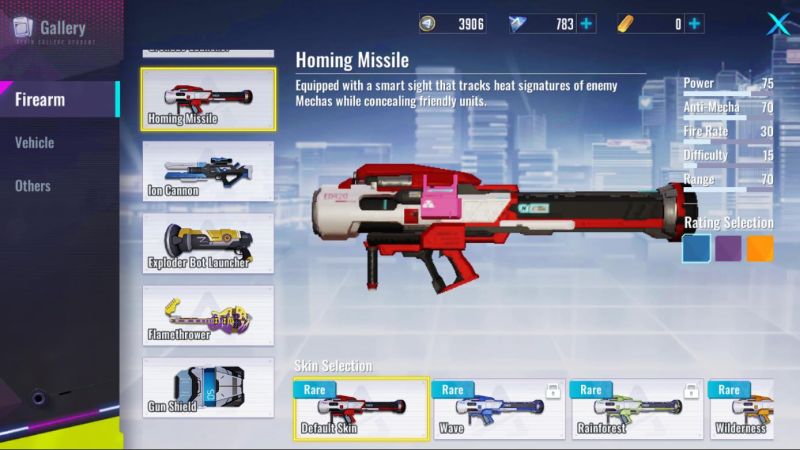 SMG – This is the basic weapon you start out with. It’s a submachine gun that has a high fire rate but mediocre damage.

Grenade Launcher – A mid-range weapon with very high damage but terrible accuracy. It shoots out a grenade which bounces for a bit before exploding.

Flamethrower – A short-range weapon that deals a lot of damage within a small area.

Exploder Bot Launcher – An odd weapon that pumps out up to two crawling bots per reload. The bots home in on an enemy then follow them around before exploding.

Gun Shield – It is literally a gun and a shield. You have a shotgun on one hand and a riot shield on the other.

Homing Missile – As the name suggests, it shoots out homing missile that hunts down enemy mechs.

2. Have A Variety of Weapons

You can carry up to four weapons in Super Mecha Champions. It is a good idea to have a mix of long- and short-range weapons to ensure that you are prepared for any scenario. The Assault Rifle is a solid choice for fighting against humans. The Grenade Launcher helps even the playing field when fighting against a mech and you’re stuck in your human form. The Gun Shield is perfect for that final close-range battle as it gives you a shield that can block up to 1000 damage. Just shield yourself and wait for the perfect moment to blow the other guy’s head off with your shotgun. The Exploder Bot Launcher is good for keeping enemies pressured, but you have to be good at switching between weapons, so you can shoot while your bots are chasing. 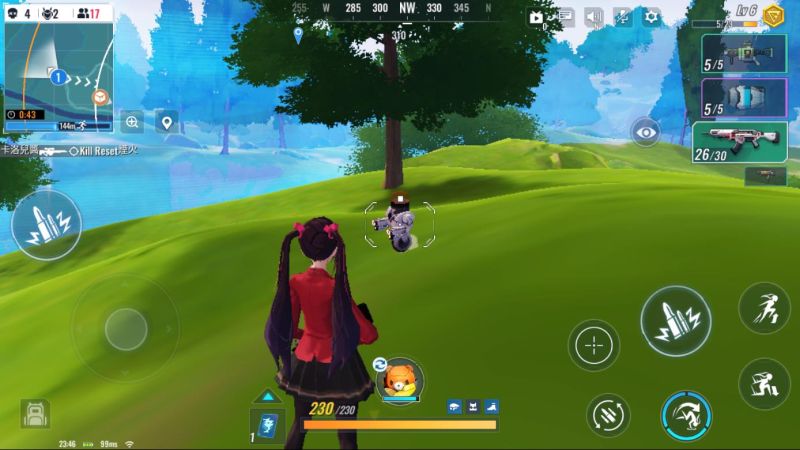 Another battle royale hassle that the game does away with is the need to loot for bullets. The only limiting factor you have when it comes to bullets is the capacity of your clip. You don’t really run out of bullets because you just need to reload and you’re good. Now all you have to focus on is staying alive while you reload. If your clip goes empty, jump and dash around to keep your opponent from hitting you.

There are healing items in Super Mecha Champions but they’re really for use while in combat. Don’t waste your recovery items if you’re just walking around and looting. After a few seconds of being out of combat, your health bar will automatically regenerate without the need for any item. If you took a lot of damage in combat and you are out of recovery items, try to ditch your opponent long enough for the automatic regeneration to kick in.

5. Use The Right Form

You are taught how to switch between mecha and human form at the beginning of the game. You are probably wondering why anyone would bother staying in human form since the mechs are so much more powerful. For one, you can’t immediately summon your mech in the beginning. There is a recharge time that you will see on the bottom of your screen. Make sure you loot as much as you can, so you will be prepared in case someone catches you before your mech is ready.

Another benefit of staying in human form is that you can enter buildings. Most of the loot are inside buildings, including the upgrade modules needed for your mech. If you stay in mech form all the time, you will be missing out on attack, defense, and propulsion modules that you need to stay competitive until the end of the game.

Staying in human form also makes you more difficult to spot. Mechs have a zoomed-out view of the battlefield, so you will be able to sneak past them if you are in human form. When in battle as a human, and you find yourself losing, quickly switch to your mecha form. This will shield your human form from further damage. You can use recovery items while in mecha form. You can also use your mech as a hideout until the automatic regeneration kicks in. 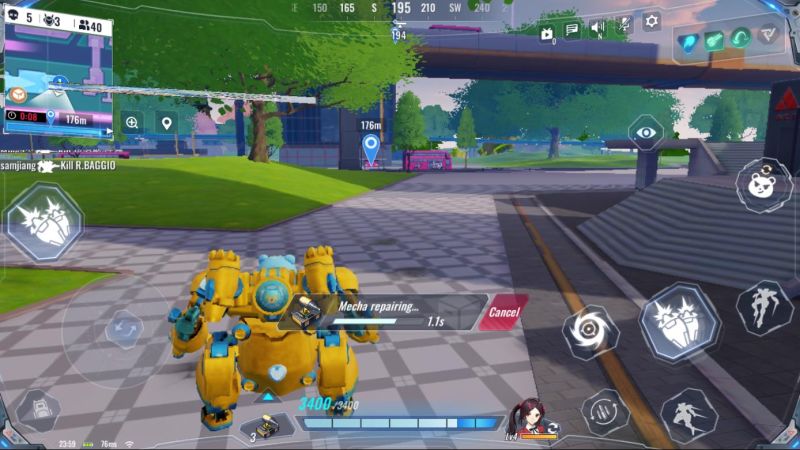 Repair items are used to recover your mecha’s health bar. Unfortunately, it takes a long time to use them. Make sure you repair your mecha’s health bar to max whenever you have a chance because you won’t know when the next battle will start. If your mecha is destroyed in battle, it will take several minutes before you can summon it again. Until then, you will be a sitting duck.

Remember when we said you can’t summon your mecha right away? There is a way to speed that up. When you open up your map, you will see a battery icon. If you go to where that icon is, you will see a giant green machine. Stand next to it in order to charge up your mecha. Be alert when charging because other players will attack you if they spot you charging up. Try to move around the battery to dodge bullets while still charging. Even if they try to charge as well, you should be able to summon your mecha before them, allowing you to wipe their puny forms immediately. 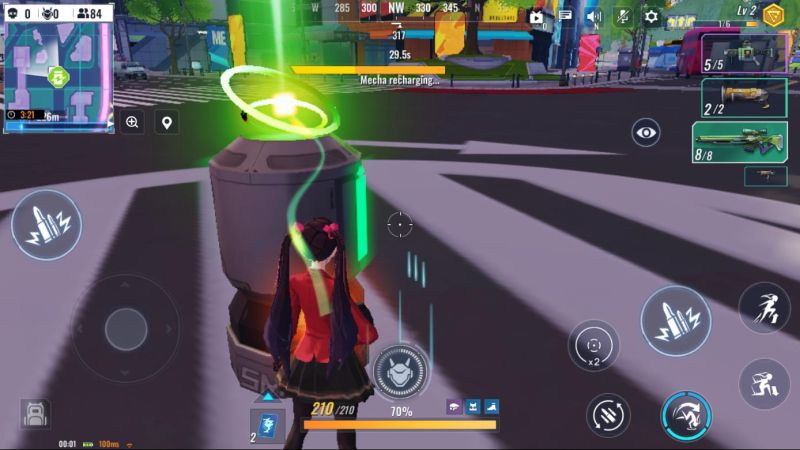 Another way to charge up your mecha is by using Recharge tokens. You can find these by looting buildings. You will need to use them manually from your inventory, and they only recover a certain amount. It still brings you closer to summoning your mecha, so use them when you can.

When you are picking up loot, you will sometimes find vehicle cards. You can use them by opening up your inventory or by tapping on the shortcut button beside your health bar. The best possible vehicle in the game is the skateboard because it lets you move around quickly. This will make you difficult to shoot and allows you to move towards the safe zone faster than everyone else. Try to save your skateboard for Ace Time, though. It has very low durability, so it will disappear right away if you get into battle.

As your level goes up, you will be facing off against more experienced players. That means they will most likely be jumping around, strafing, and rolling while you shoot. Make sure you do the same to avoid getting shot. You can follow them with your shots even while you are moving by dragging the fire button. This will allow you to continuously fire at your opponent while adjusting your aim.

When you summon your mecha for the first time during a match, you will be taken to a selection screen that shows you all your unlocked robots. Think about your choice carefully because this is the only time you can choose within that match. All subsequent summons you make will automatically choose the mecha you summoned in the beginning. That means you won’t be able to switch from a Caramel to a Gabriel within the same match. 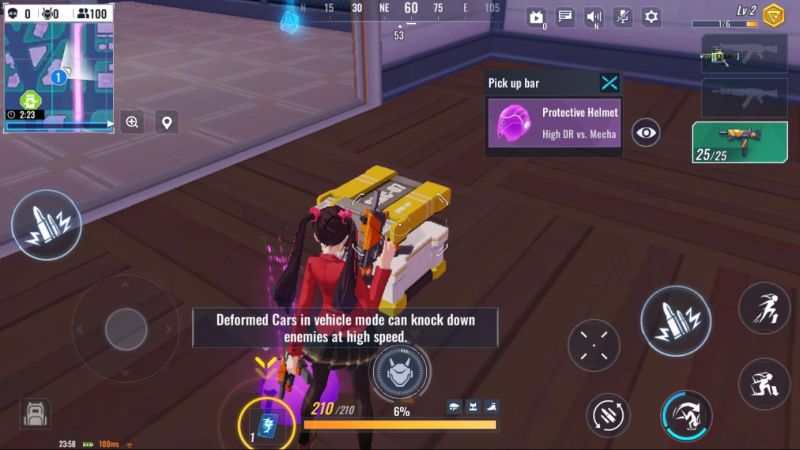 When you walk around, you will see colored items lying around. Green is the basic rarity, followed by Blue, and then Purple. Gold loot is usually very rare. While it is possible to find rare loot on the floor, you can usually find better loot by opening Advanced Crates. The good news is that you will know where the crates are because you will see a chest icon while walking around. Just walk towards the chest icon to find the chest. Just keep in mind that other players can see this as well and will most likely try to kill you before you can get the loot.

Another way to get rare loot is by killing the blue NPC mecha on the map. The location varies, but if you encounter it, you can try to kill it. It will probably take you a couple of clips’ worth of bullets to take it down. Watch out for a red circle on the floor when trying to kill the blue mecha. This means he summoned missiles and it will deal enough damage to kill you if you get hit.

If you are a veteran battle royale player, you might be confused when you encounter Ace Time. The game follows the typical battle royale mechanic where the map is slowly covered in a deadly zone that depletes your health if you stay in it. The only option is to go to the safe area. This safe zone gets smaller until you have nowhere else to go and are forced to face off against the remaining survivors. Ace Time is when the safe area reaches a certain size.

Unlike in other games where the safe area continues to get smaller until it disappears completely, Ace Time will actually move the safe circle. You need to find a way to get to where the circle is moving, or you will get stuck in the danger zone while your enemies snipe at you. It is usually a good idea to move to high places because you get to glide when you jump off, making it easier to move from one place to another. 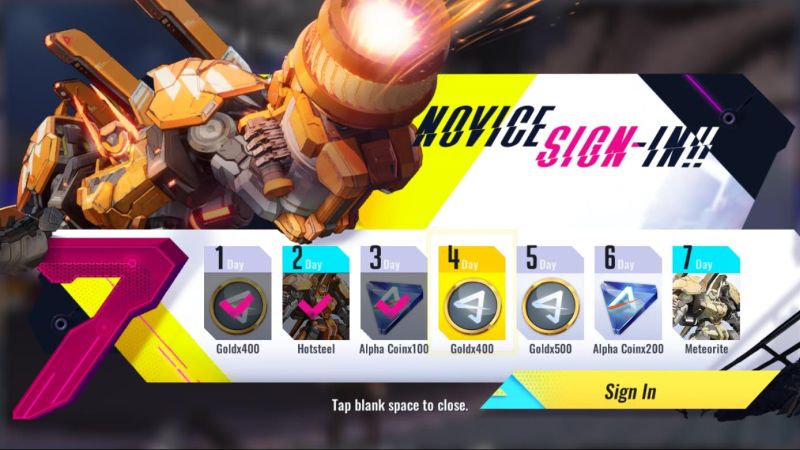 Even if you don’t have time to play Super Mecha Champions, make sure you still try to log in. The game gives out daily login rewards for active players. You can get Gold, Alpha Coins, Energy Crystals, skins, and even unlock new mecha by simply logging in. The game is also holding an event called Riko’s Daily Surprise where you get to claim 10 Alpha Coins and a free draw from the Lucky House. Try to make time for these freebies every day to help maximize your resource gain. 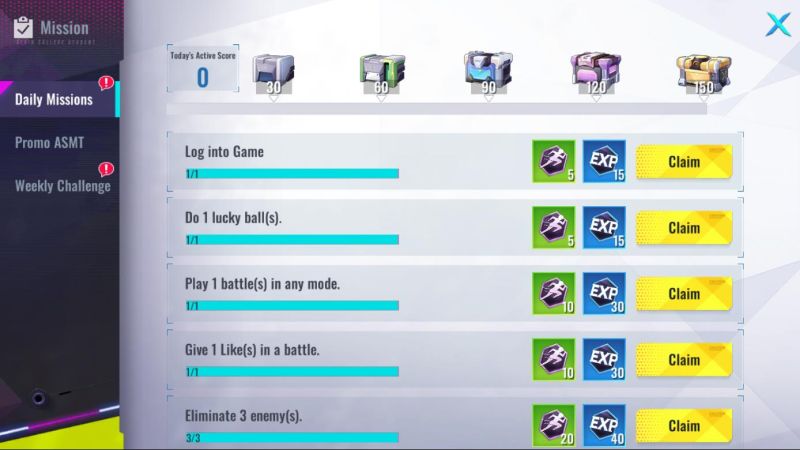 Completing Promot ASMT missions reward you with Badges that increase your Training Level. You will receive various rewards whenever you reach a new Training Level. This includes Gold, Alpha Coins, Skins, icons, and more. Finally, completing Weekly Challenges reward you with more Alpha Coins and a lot of player experience. The game gives you even more rewards whenever you reach a new player level.

Battling with giant robots is a great challenge, but with the help of our Super Mecha Champions beginner’s guide, you can win every match! If you happen to know additional tips, cheats or strategies, please let us know in the comments!

How do you use the wind charms