MMORPGs are a dime a dozen these days, so it is pleasantly surprising when one tries to break away from the norm. Spiritwish sets itself apart from the competition through its unique three-person party system where players can mix and match their favorite classes.

Available on Android and iOS platforms, Spiritwish adds its own twist to MMORPG staples like PVP, guilds, character customization, skill builds, and even dungeon runs. The game even has a boss dungeon where players can use up to 9 characters at the same time. Where the game truly shines, however, is in the variety of classes players can choose to build their teams with. If you are just starting out in the game, then we advise you to read our Spiritwish beginner’s guide, as it comes with several useful tips and strategies to start your adventure the right way. In case you are looking for useful information about the best heroes in the game, then stay with us as in this guide we will provide you a list of the best characters.

In Spiritwish there are four main classes, such as Tank, Melee, Ranged, and Support. Which ones do you choose to build your main team? While all the classes can be viable depending on team composition, there are some that are generally considered better than their peers. Check out our Spiritwish best heroes guide, as we are showcasing a tier list of the best characters in each class.

Tanks are the front liners of the game. Their job is to get in the enemies’ faces and soak up damage, so the other members of the team can attack safely. Sadly, there are currently just four Tank classes in the game. Most players skip Tanks and just choose a beefy Melee or settle for a really good healer. If you still want to have Tank on your team, though, these are the best ones. 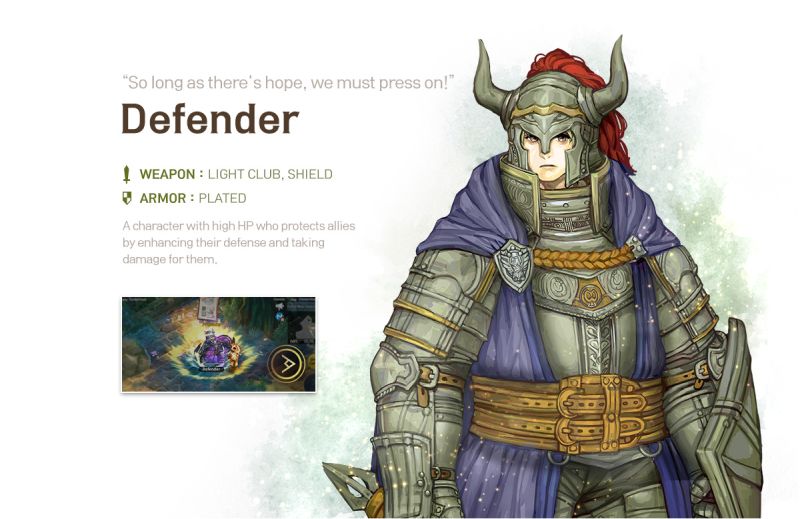 With a name like that, how could he not be the best Tank in the game? This guy is a walking shield and is nearly impossible to take down when fully equipped and properly leveled. He is also the best Tank to bring along if you have two squishy Ranged characters. He has two taunt skills that will help keep enemies away from your back line. If enemies manage to target the back line, his Sacrifice skill will redirect a percentage of the damage received by up to three party members. His remaining skills are mostly focused on increasing his survivability.

The great thing about this girl is that you get her from the start of the game, and she remains viable even in late stages. While she is a Tank, she is able to hold her own in terms of damage. She goes well in a team that has a healer since she isn’t as tanky as the Defender. Her Breakthrough skill adds her DEF to her ATK for a certain period, making her a better offensive option compared to her male counterpart. Her Role Division technique also gives an ATK and DEF buff to her team if all members have different roles, giving players an incentive to put her in a balanced team.

As the name suggests, the Melee class specializes in close combat. They deal more damage compared to the Tanks, but they also have better survivability than Ranged classes. If you do decide to skip having a Tank on your team, it is a good idea to pick a really good Melee character to serve as your front line. 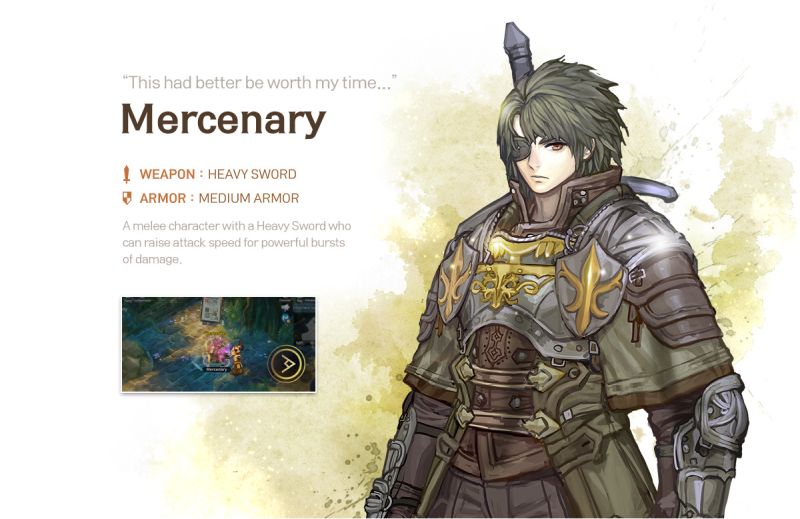 If you are the type who enjoys PVP, a Mercenary is great to have on your team. His skills dish out great burst damage that will help finish off enemy characters while their heal is on cooldown. Don’t even worry about Berserker’s 85-second cooldown. That percentage increase in ATK and attack speed, not to mention the instant cooldown reset for all other skills, is more than enough to rip the enemy team to shreds in a matter of seconds. Of course, the fact that he also has stun and disarm makes him even more annoying to go up against in PVP. 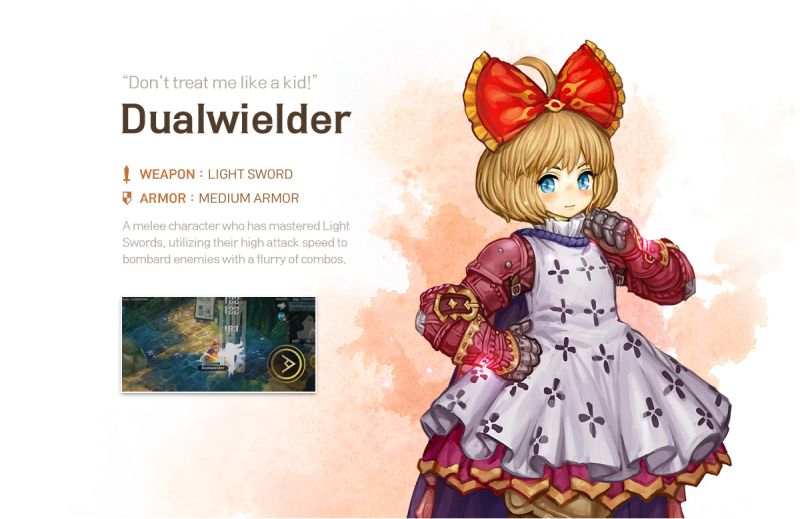 Don’t be fooled by this character’s little girl façade. She is a fiery little fighter that pulverizes her opponents with a flurry of attacks. Her skills will have enemies bouncing around with her knockdowns, knock ups, and push backs. Even when enemies try to escape, her Waves technique makes it easier for her to give chase compared to other Melee heroes. Her Combo Hit Bonus and Dual-Wielding Proficiency makes her lethal even without active skills. Finally, her Titan Slayer makes her invaluable in any Boss Raid.

Do you want to be even more annoying in PVP? Add a Striker to your Mercenary team. He is another stunner whose Final Impact deals massive damage to up to 8 enemies and even lowers their DEF temporarily. On top of that, his Competition skill gives the entire team a boost in ATK and movement speed if there is another Melee teammate.

Ranged heroes deal a lot of damage from afar. The tradeoff, of course, is they have light armor. This means they die faster if the enemies focus on them. Make sure you have a way to increase survivability if you are going to add a Ranged character on your team. That being said, their raw power more than makes up for the work you will have to put in to keep them alive. 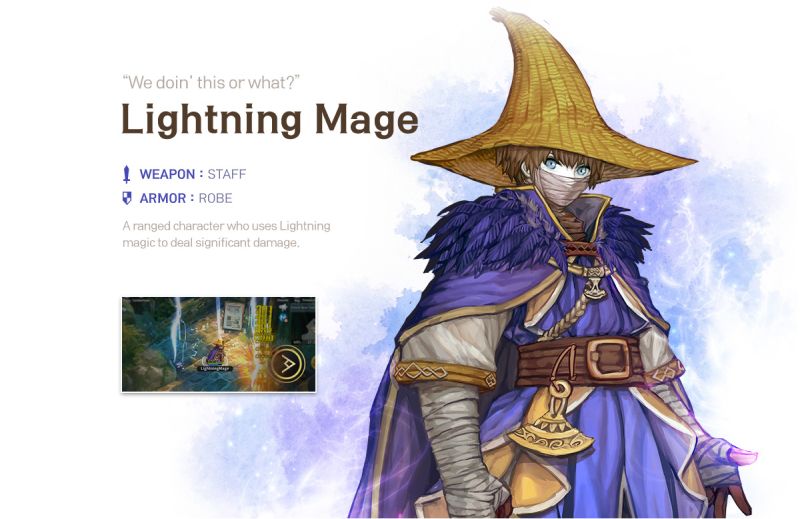 It doesn’t matter if your focus is PVE or PVP, the Lightning Mage is a great addition to your team. Where do we even begin? His base damage is massive, for starters. He also has a team buff that adds lightning damage to his team’s basic attacks. He makes Melee characters in PVP cry with his stun, knockdown, movement speed reduction, and DEF reduction. Pair him up with another stunner and you will be dominating in PVP. 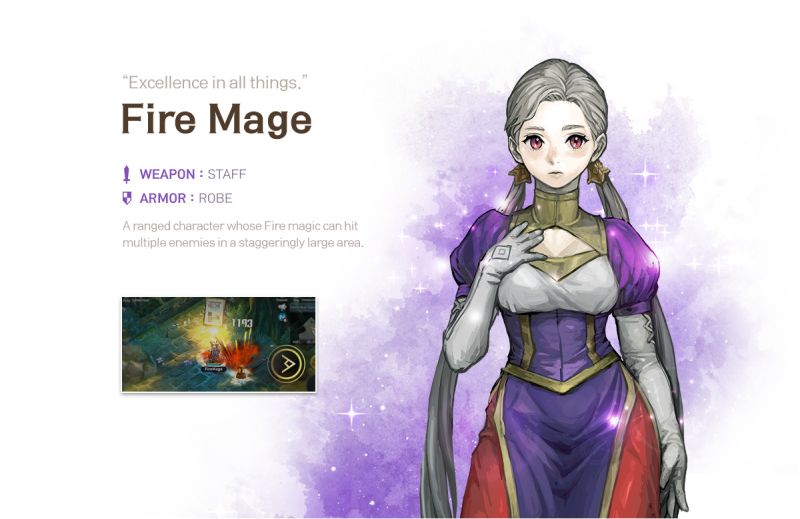 While not quite as good as the Lightning Mage in PVP, the Fire Mage’s damage output is more than enough to put her at the top of any tier list. She even has the potential to deal more damage than the Lightning Mage once everything is maxed out. Just make sure you have a healer on your team to keep her alive and let her do her thing. 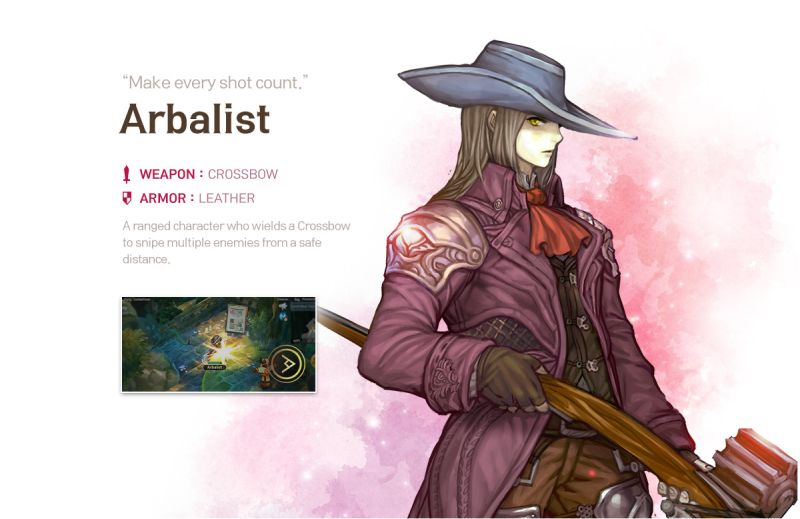 He may not be as fancy as the mages, but the Arbalist’s straight shooting deal a lot of damage. His Submission Shot has a 100% chance of stunning enemies, making him viable in PVP. He also has the Heavy Draw technique that increases his crit rate when enemies are closer, which means he can punish people for coming at him. PVE is where he truly shines as he also has the Titan Slayer technique that allows him to deal more damage to Bosses. Since he is a ranged hero, he can take advantage of Titan Slayer without having to come dangerously close to the Boss the way the Dualwielder has to.

Supports may not have as much damage as other classes, but they help your team out in other ways. Most supports have healing abilities, helping your team stay alive longer. Others have shields and buffs that make your other characters even more potent killers. There are different tiers of Supports, but the best ones are listed below. 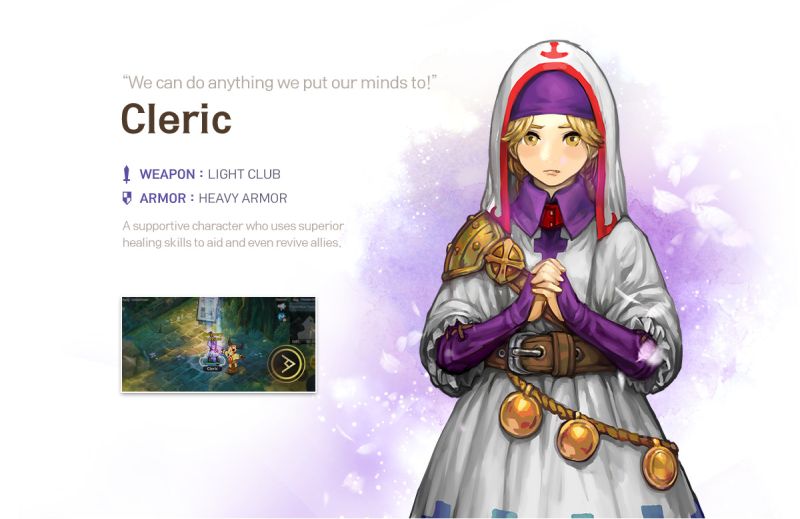 Just like the female Fighter, the lady Cleric is available from the start of the game. She also remains viable when properly equipped and upgraded. Her basic Heal has a 10-second cooldown, making it valuable in both PVP and PVE. She also has the Survivor and Narrow Escape techniques that help keep her alive long enough to Revive her fallen comrades. If you want a funny PVP team, get two more Light Club users because her Power Swing technique will add a chance to stun to everyone’s basic attacks.

Unlike the Fighter classes, the male Cleric actually has the advantage because he has higher base stats. He also has more offensive buffs compared to the female Cleric, which makes him better in a team that already has decent survivability. Other than that, he is great for any team for the same reasons the female Cleric is great. If you’re looking to make a Power Swing team, teaming up with the female Cleric will also allow him to take advantage of Teachings of Virok which increases his Crit Rate.

As with any MMORPG, the Monk class is the perfect mix of offense and defense. He has offensive skills that can deal decent damage, not to mention a stun skill that has a 25-second cooldown. He also has offensive and defensive buffs, though not as potent as the two Clerics’ buffs. Finally, he has the same 10-second heal skill that makes the Clerics so useful in PVP and PVE.

Just in case you were wondering, the Monk also uses light clubs. You can complete your Power Swing team with him instead of a Defender, so everyone can take advantage of the Teachings of Virok. Of course, having three healers would also benefit you when you try to complete Onkalo runs, so it wouldn’t hurt to invest in all three Supports on this list.

Now that you know the best classes for each role in Spiritwish, it is up to you to mix and match your favorites in order to assemble the ultimate team. Just remember everything you learned from our Spiritwish tier list, and you’ll build your dream team in no time! Do you agree with our picks, as the best characters in the game? Let us know your thoughts in the comment area below!

I feel like the Runesingers need to be mentioned. Runesinger (Bow) is by far the best unit for PvE, thanks to her massive ATK/Lifesteal Buff against monsters and her Crit DMG Buff, while the other one is exceptionally strong in PvP thanks to her massive shield, while also being good in PvE, especially against bosses because of her defense reduction.