Spiral Roll is a clever new arcade runner game from French developer Voodoo, the studio that brought the world dozens of popular arcade games like Crowd City, Draw Climber, Helix Jump, and many more. In Spiral Roll, players take on the role of a chisel, scraping through all manner of surfaces to create spirals of varying sizes as they race through obstacles and rewards to see who can get the highest score.

Spiral Roll is a simple game – that’s the signature design from Voodoo. It doesn’t have complicated mechanics, and it doesn’t require that much investment to enjoy. It’s designed to be a fun arcade game, but even then newer players might have some trouble navigating through its interface or figuring out exactly what to do.

If you want to show off your high score to your friends and want a little help getting there, then stay with us and check out our Spiral Roll guide! Below, we present you a few handy tips, cheats and tricks to help you beat your high score in the game.

1. Points Are Better Than Coins

Right now, there are two things you can earn in every run – points, and coins. Points are rewarded for progressing through each level and represent the player’s score for the run. Coins, on the other hand, appear randomly and can be picked up using either your chisel – that’s your player avatar – or your spiral rolls.

That said, in the current iteration of Spiral Roll, coins don’t serve any purpose. They’re still worth hanging onto since Voodoo will likely be implementing shops and/or upgrades in later updates to the game, but for now, the points matter most. Don’t jeopardize your run by trying to get as many coins as you can. Focus on keeping your chisel moving, and think of the coins as a bonus to getting a high score.

In Spiral Roll, the bigger you can make your rolls, the more points you get as a reward. Holding down your chisel for a second or two to make a decently-sized roll might give you a few hundred points, but holding it down for longer and grinding up a much bigger roll will lead to far greater points thanks to the multipliers.

The multipliers show up on top of your spiral as you’re grinding into it, so it’s easy to see how much more points you receive for a bigger payload. On long straightaways with no visible obstacles, hold down on your chisel to grind up a massive spiral roll that could easily multiply your score by 7, 8, or even higher.

Taking the earlier tip into consideration, bigger doesn’t always mean better. Some levels are outfitted with obstacles that force players to comply with a certain vertical clearance. These obstacles show up as upright trees with low-hanging branches. If you roll too large a spiral, they’ll catch on the branches and stop – often to fatal effect. 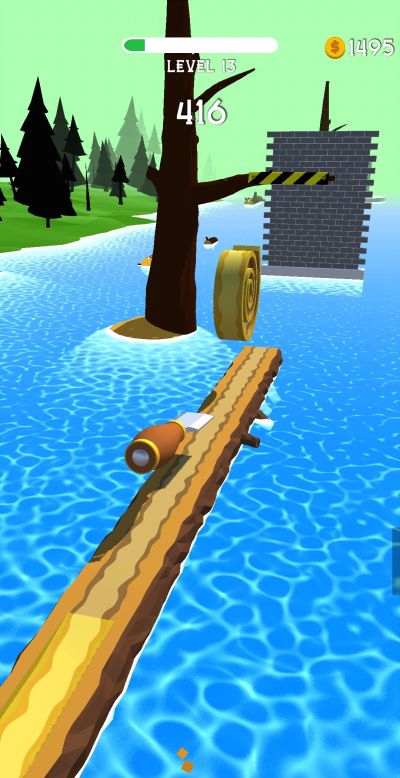 Especially when there are other obstacles across the gap, getting your spiral roll blocked mid-air sometimes means your chisel will be heading straight into a brick wall, potentially ending your run. If you come across these vertical clearance obstacles, remember that any roll with at least an x2 modifier (note the visible change as the roll’s width increases) will be able to punch through these obstacles regardless of how big the spiral is or how big the obstacle is.

4. Precision Gets The Best Rewards

Throughout the game, players will often come across colored surfaces that react to your spiral rolls, often giving a reward depending on where it initially lands. The rewards range from a few coins to as much as 50, or even 100 or more, but the general rule is that the greater the reward, the harder it’s going to be to stick that landing.

That’s where precision comes in. It’ll be hard at first trying to gauge where your spiral roll is going to land once you release – especially since the speed of the thing depends on several different factors like size and the current speed of your chisel.

However, as you progress through the game and gain experience, it becomes easier and easier to make good approximations of speed and distance. The trick here is to just keep at it, aim for the highest reward, and make your adjustments accordingly. It takes some practice, but it really helps to make sure you’re aiming for a single target. That way, you can better gauge what you need to do to improve on your precision timing.

At the end of each level, players cross the “finish line” – a sort of red carpet leading up to tiered rewards of up to 50 coins. The reward pattern is different each time, but if you go by colors, it’s easier to figure out which block has the highest rewards (and therefore, is you should be aiming for).

Blue boxes often indicate the lowest possible reward, usually just a few coins, and are the easiest to hit since they have typically larger boxes to land in. Green Rewards offer more coins and are still pretty easy to score. These are followed by Yellow Rewards, which yield plenty of coins. Finally, the Red Rewards represent the “bullseye” – the most difficult reward to achieve but also the most lucrative, often rewarding players with massive coin payouts.

To maximize how much you get with every level and every run, it’s important to master the final leg. The distance is always the same, although you will have to adjust for your chisel’s speed and the size of your spiral roll, so you can definitely use trial-and-error to significant effect in improving your performance in this aspect of the game.

That’s it for our guide to Voodoo’s Spiral Roll! We hope you enjoyed these few simple but effective tricks to leveling up your game. Spiral Roll is a brand-new mobile title available on Android and iOS, so expect some more features and content to be coming to the game anytime soon.

For more tips, tricks, and strategies to Spiral Roll, be sure to check back with us soon! If you have any questions or suggestions, leave us a message in the comments section below and we’ll make sure to get back to you!

Please update the guide as there are new features in Spiral Roll.