French developer Voodoo just can’t stop churning out addictive mobile games. Following the success of popular titles such as Dune, Helix Jump and Ball Blast to name a few, the company is back with their latest game called Crowd City. Mob mentality can be pretty scary, especially when the mob is large enough to trample you! Crowd City puts the power of the mob in the hands of players in this unique .io-style game for Android and iOS devices. Your goal is to gain power and obliterate all the other players on the map. To do so, you will need to gather a crowd.

In Crowd City you start off with a single person, and you must travel across town to recruit more crowd members until you have enough to overpower the other players. You must then start chasing down other players with smaller crowds in order to eliminate them from the competition. Be careful, though. Others will be trying to do the same thing to you. Make sure you read our Crowd City cheats, tips and tricks to crush your opponents and ensure your victory! 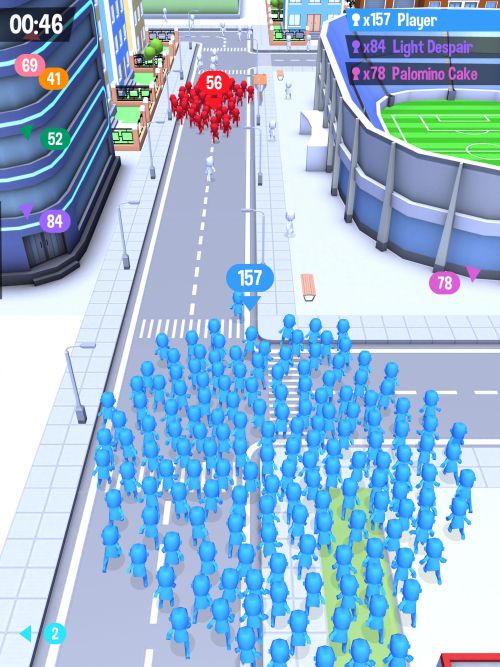 When you start out in Crowd City, you will only have one person in your team. You can recruit more by travelling around the town. Make sure you focus on gathering more people for your crowd during the first few seconds of the game. If you see another player, don’t bother chasing just yet. In fact, you should run in the opposite direction. Other players can easily recruit the members of your crowd, making you weak and easy to eliminate. Gather strength and wait until you have a considerable crowd following you around before confronting other players.

Once you have around 35 people in your crowd, you should start hunting players with smaller groups. Even if you won’t be able to gain much from them, eliminating them early will allow you to get rid of potential competition later in the game. You will also be taking away potential targets for bigger players, making it more difficult for them to gain more power. Just make sure you are considerably bigger than the crowd you are chasing. If you only have a couple of people more than the other player, it might be wiser to stay away, just in case they suddenly pick up a few more neutrals right before you catch up with them.

One of the biggest challenges in other .io games is that the controls can get a bit tiring after a while. That is addressed in Crowd City by giving you one-tap controls. When your crowd starts moving in a certain direction, they will continue to do so even if you are not dragging on the screen. That means you just need to swipe whenever you want to change directions. This makes it less tiring, but you will also have to be more attentive because you won’t have the benefit of constant control on your people. 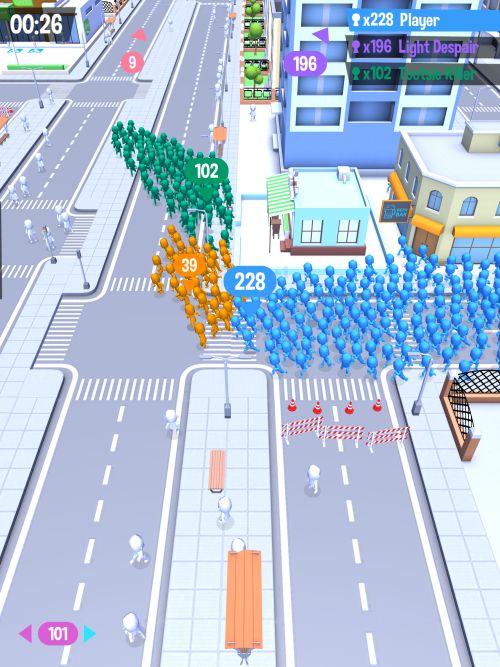 Running away from others is just as much a part of the game as chasing players. When a bigger player is running after you, you can get away by going in between buildings. Doing so will split up your crowd, making it more difficult to follow them. Most other players will lose interest at this point and will just look for someone else to chase.

5. No Need To Finish Off Players

When you catch another player, you will slowly steal away their crowd members. Most of the time, they will manage to run away before you can finish them off completely. It is alright to let them get away instead of trying to eliminate them. Once they manage to get away, you should just look for another target to leech off some more crowd members. You just need to have the biggest crowd by the end of two minutes, so do not waste time chasing stragglers.

It is time to crush the competition with the power of your mob! Just stick to our Crowd City cheats, tips and tricks above and you will be winning every game with ease! If you know other tips or just want to share your thoughts about the game, feel free to leave a message in the comment section below!

I made my crowd torn into a ball and rib over people. This has happened twice for me. Once with the lava men and once with the football players. I'm not sure how I made it happen. Sites anyone know how to do this.

@Jeffery Lynn Clay, 3 kills does it. There are 3 skulls on the left to count them.

Is there other levels I can reach?

Extra time DOES NOT help because there's barely any people on board when everyone else is eaten up.

I had zombie land, the farm and a pirate island and it was only temporary and they’re not an option anymore. I’d love these options back!

Last week I suddenly had extra maps... a zombie land (that I had to earn 2500 people to unlock), a pirate ship one, and possibly more. I had just unlocked the pirate one, but hadn't played it, but suddenly I am back to only the standard city format.

Anyone else had these features?