In collaboration with Activision, Com2uS has just released a brand new mobile game called Skylanders Ring of Heroes. The game is a turn-based RPG and features a rich roster of heroes who come from the universe of Skylanders, and a polished combat system that never feels overwhelming despite its depth. In the game you play as a Portal Master, a powerful entity that’s able to summon and command various Skylanders in order to defeat Kaos, a mage who disrupted time and space using the Book of Dark Magic. The Portal Master will then embark in various PvE and PvP quests throughout Skylands in order to collect Skylanders and empower them to become more powerful as the game progresses.

Spyro and his mates will need your help in order to defeat the evil Kaos and bring order to Skylands. And that’s why our Skylanders Ring of Heroes beginner’s guide is going to provide you useful tips, cheats and tricks to assist you into creating a powerful team that can make you enjoy the game to its fullest.

1. How To Use The Summon Feature

Summoning in this game is different from the system used in most other mobile games that involve summoning units. Instead of getting the full unit, when you use the summon feature, you get fragments named Soul Stones. Summoning a full unit requires you to own enough Soul Stones of that unit, but worry not, every time you open a Summoning Chest, one of the units at random will get you 8 times as many Soul Stones as the standard amount, which is enough to fully unlock the unit. While getting powerful characters in Skylanders Ring of Heroes is quite easy even at the start, do not fall into the trap of spending all of your gems into unlocking them when you’re just starting out. Upgrading powerful characters is way too expensive for a new player, so you’re better off spending your resources into upgrading lower tier units to a much higher level, as this is way more efficient.

2. Learn How The Combat Screen Works

The battle screen has all the information you need to succesfully win your battles. On the bottom of the screen you can see how much mana you have at the moment. You can never have more than 10 mana, and more powerful attacks require mana, so you can’t just spam the most powerful attack of each of your unit mindlessly. Right above the mana bar there are the icons of your units’ skills, a simple tap is all you need to select your next attack. You can queue up to 3 attacks, tap on an action that’s already queued to delete it from the queue. On the left of the skill icons you can see the attack queue, which will tell you who is about to attack, while on the right you have the companion summon button, which summons a villain to fight with you. 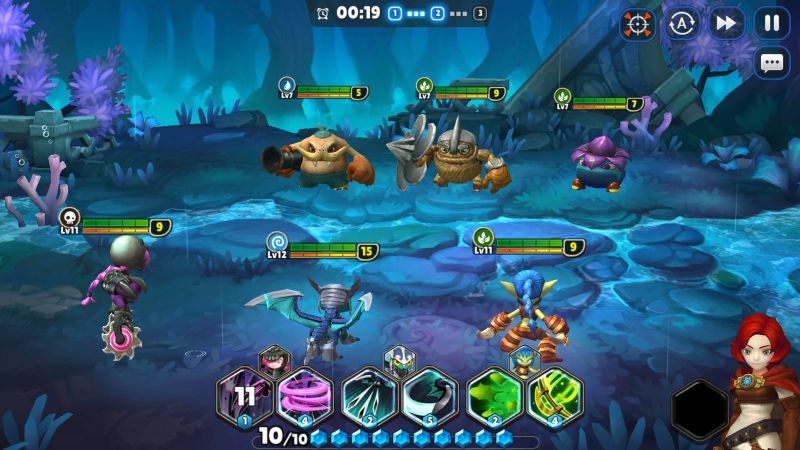 Every unit has 2 bars above its head: the green bar represents the unit’s Hps, while the red-to-yellow one represents its endurance. An unit faints when its Hps reach 0, while it simply unable to attack when its endurance reaches 0. Next to these bars you can see the unit’s element on the left, and its level right below, and its endurance on the right. Remember that elements make your unit stronger or weaker against different elements.

On the top of the screen you can see how much time has passed from the start of the dungeon and how many rooms the dungeon is made of. On the top right of the screen you can see the targeting options, where you can tell our units to focus their attacks on certain monsters or let the AI decide, you can also let the AI decide which attack to use by tapping on the A button surrounded by arrows, and we can double the speed at which the fight happens with the double right pointing arrow. You can also pause the fight if need be.

The combat system takes the tried and true turn based ability focused gameplay and gives it a unique spin. You can queue up to 3 attacks as long as you have enough mana to perform them. The system rewards fast and smart decision making over mindlessly spamming abilities as soon as they are ready and you have the mana to use them. Since every ability has a specific effect, you need to maximize the value each one brings to the battle.

For example certain abilities can place debuffs your units, and you might want to get rid of them immediately before conditions such as Poison take their toll over your units. The combat system functions in the same way in PvE as it does in PvP modes, the only difference is that the one who clicks its spell faster moves first, but be careful, as we already said, the quality of your moves matters just as much as the speed at which you execute them. Be sure to hone your skills against the AI controlled monsters before jumping into battles against other humans, so that you can play confidently against other humans, and defeat them in duel to raise the ranks and become a great Portal Master.

4. Focus On Elements And Team Composition

There are 10 elements in Skylanders Ring of Heroes: Dark, Light, Undead, Magic, Air, Fire, Water, Life, Earth, and Tech. Each one of these is strong or weak vs other elements, for example the Tech element is strong against Fire and Magic elements, but is weak to Life and Earth elements. The only exceptions are Light and Dark, since they are strong against each other and neutral to everything else. You can check a full chart of the elemental strengths and weaknesses in the game, next to your Skylanders’ attributes on the main Stats screen. Elements are a very powerful addition to the combat system, and they can allow you to overpower enemies much stronger than you. 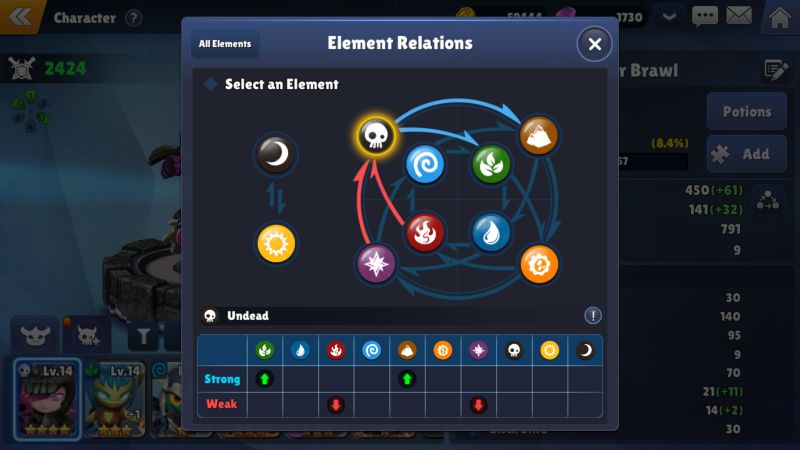 Speaking of team strength, make sure to check the team composition’s power before starting a dungeon, if your overall strength value is lower than the one of your enemies’ your chances of winning drop drastically. You can still attempt to do the dungeon, but it will require careful planning of your next move. Remember that having an elemental superiority can turn the tides of the battle easily, even if the power level of your team is lower. Losing a dungeon is not the end of the world though, at least early game, where the Energy cost to enter dungeons is still low.

Another thing to pay attention to before embarking on a mission is the specific skills of your units. A lot of units have more than the 2 skills you are allowed to bring to battle, so be sure to experiment what skills work best against the enemies you are going to face. Certain units have also access to passive abilities, these activate whenever their conditions are met, for example your unit could heal itself when it deals a critical hit. Every Skylander belongs to one of four roles: Support, Attack, Defense, or Expert, you can check which role your units belong to right next to the icon on the right column of the Stats screen. The role changes what kind of boosts the unit provides to its teammates in battle. For example Expert characters have low cooldowns on their skills, while Attack characters provide Attack boosts to your units, in the form of ability damage.

5. How To Get More Gold, Blue Potions And Energy

Buildings in your hometown net you additional bonuses, such as extra Gold, Blue Potions, or Energy every 30 minutes. They are well worth their price and produce for you even when you are not actively playing. Buildings can also be upgraded, which requires a hefty amount of money. Buildings can be purchased in the game shop, and they cost Gold. Don’t forget to check your Structures menu in the shop periodically after you level up, since you will need a higher Portal Master level to gain access to certain buildings.

6. Upgrade Your Units Whenever You Can

There are numerous ways to boost up your summons. They can level up by earning experience points through battling or drinking red potions. A great way to earn Experience Points is by using the 10x Auto System, where it will run the same dungeon 10 times at increased speed automatically, and it will automatically give you all the rewards associated with running through the dungeon 10 times, it’s a great system that allows you to skip the most mind numbing part of the grind and only looks at your phone every so often, instead of every 2 minutes. They can be Powered-Up, which requires you to combine a certain amount of the unit’s Soul Stones with Upgrade Elixir. They can be evolved, which requires the unit to be at its level cap plus a certain amount of Soul Stones of the unit. 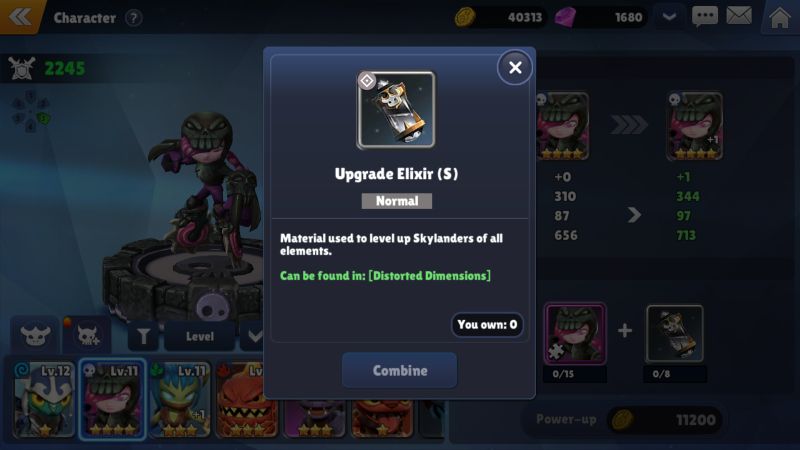 There’s also the option to Awake your units if you have enough Soul Stones and the unit’s elemental ore. There’s 2 other ways of upgrading your units: Runes, which can be equipped and boost specific stats, and you can even boost the unit’s skills, for which you will need the unit’s elemental ore and Upgrade Stones. You can check how to obtain all of the mentioned items by tapping on them in the “Characters” menu, selecting the relative tab.

There’s one more way to boost your units, it involves boosting the unit’s Skills. To boost a skill, you will need the unit’s elemental ore plus Upgrade Stones. You can also upgrade your summoned Villains, in order to do that you will need to feed them with Blue Potions.

7. Energy Is The Most Important Resource

Energy is what allows you to actually play the game, and while there’s no shortage of it, and buildings even allow you to produce extra energy, the amount of content you can farm depends on how much energy you have. The amount of Energy needed to enter a stage is directly proportional to the stage’s difficulty. This means that for the early and mid game you can realistically play all you want, while later in the game you won’t need to spend as much time on your hard trained squad, which is great. The fact that there’s a lot of Energy available also means you don’t necessarily have to spend money on the game, f2p players rejoice! That said, the deals in the store seem like very good value despite all the gifts the devs give you just for playing the game, which is definitely a plus.

8. Keep An Eye On The Missions Tab

The game showers you with resources. You can see what quests you can do by checking the “Missions” menu, there’s all kinds of quests, from simply cleaning levels, to boosting your units, to summoning units of specific power. You can get any kind of resources from completing these quests: gems, money, energy, potions, and even omni-gems! All missions give you experience. 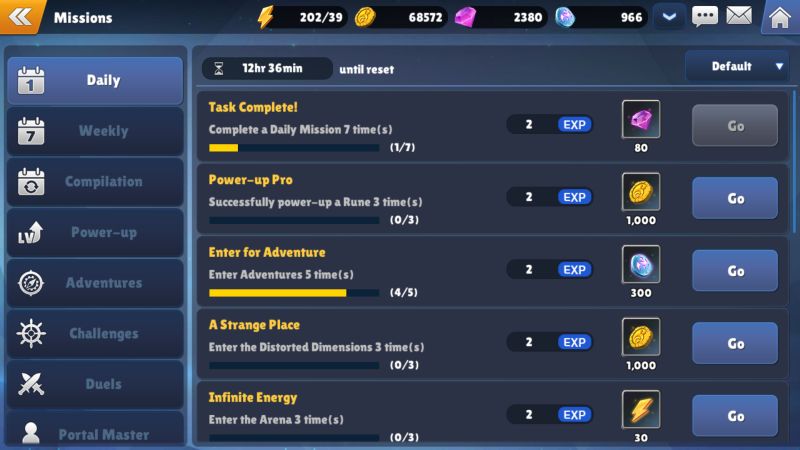 You can check when daily and weekly missions reset on this screen, so make sure you maximize your earnings from them. There’s no time limit to complete the missions in the other categories.

And this ends our Skylanders Ring of Heroes beginner’s guide. The game offers so much stuff to do, and the combat system is very deep despite its simplicity, and we are sure it will keep you busy for many hours. If you have any other tips, tricks or strategies for the game, then make sure to let us know in the comment section!