You’ve started your journey in Skylanders Ring of Heroes, but struggling to progress through the story? Are you stuck in a particularly difficult boss fight? Are you unsure about how to build your team to breeze through the early game? Then you’ve come to the right place. Our Skylanders: Ring of Heroes advanced tips and tricks will bolster your gameplay. Following this guide will make progressing through the game much faster and easier than going in blind, while still allowing you to choose how to build your own team according to your playstyle. In case you are looking for a guide for beginners that explains the basic concepts of the game, make sure you check out our Skylanders Ring of Heroes beginner’s guide! However, if you are an advanced player, stay with us as we are going to share with you plenty of useful tips and tricks for farming, boss fights and many other topics!

What makes a good early game Skylander? The answer is simple: how easily you can farm their respective Soul Stones. That’s why characters like Tuff Luck, Hot Dog, and Night Elf are all great choices for your early game party. Just by doing the game’s Quests system you get a lot of Hot Dog and Night Elf Soul Stones, while Tuff Luck Stones can be easily acquired by farming the levels from 1 to 6 in the Shining Forest on Easy difficulty. Speaking of Night Elf, it’s by far the best character you can have on your party early, since it has a higher level cap than other basic characters, and the game rewards you with over 400 Soul Stones of him just by doing the Quests. 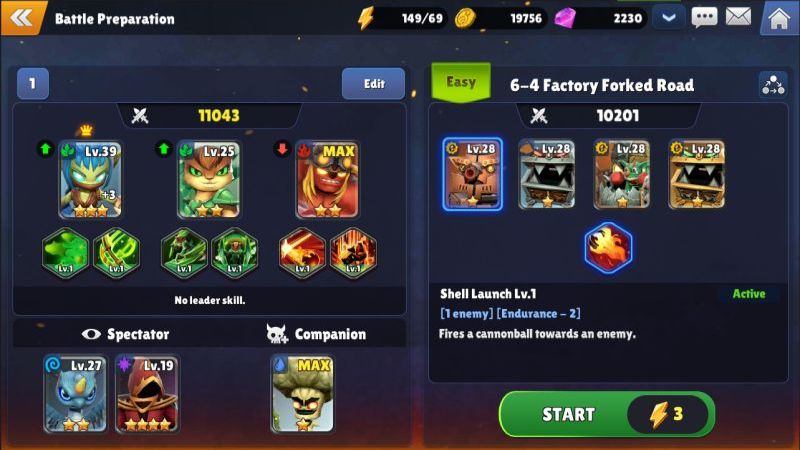 Another great early game unit is Kaboom, who will remain useful throghout a lot of the game as well, and is especially devastating in PVP battles thanks to his incredibly powerful attacks. Other good early game characters are Snap Shot and Whirlwind. Regarding Companions, the only one really worth using is Broccoli Guy, which is great, since he’s very easy to level up, his Soul Stones can be collected simply by clearing The Misty Bog levels at any level of difficulty.

2. Where To Farm Additional Gold, Gems And Soul Stones

In your Hometown screen you can see the Arena and the Challenges icons next to the Adventures one. Accessing the Challenges screen will let you choose between 3 different Areas: the Cave of Gold, the Realm of Souls, and the Mirage Tower. The Cave of Gold is unlocked by clearing the 4th level of the Misty Bog on Normal difficulty. You can enter it 3 times every day. You will have to win various battles like in the regular levels, except you will find golden monsters. These are the monsters that will give you a lot of gold when you defeat them. You can enter a battle up to 3 times. The reward for completing a level in the Cave of Gold is a lot of Gold coins, so make sure to visit it daily to maximize your earnings.

The Realm of Souls allows you to play vs other teams of Skylanders controlled by the AI. The rewards for winning the battles include Soul Stones of the Skylanders you defeat and Omni-Gems. These battles require a little more Energy than the battles in other parts of the game, but guaranteed Soul Stones makes it worth it to go for them. In the Mirage tower you get unique rewards everytime you clear a floor for the first time, and the floors reset back to 1 at the start of each month, it’s the only way to farm upgrade materials to boost your units’ skills.

The arena is where you battle against other players, and it’s a very good way of quickly earning some sweet rewards. Playing in the Arena consumes Gear instead of Energy. Aside from the 5 daily wins that will net you Arena Medals, a currency you can exchange for Soul Stones of rare Skylanders or Omni-Gems, you will get a rank that goes from Bronze to Grandmaster, additionally, each one of these ranks has 3 divisions that go from 1 to 3. Winning a match will earn you Rank Points, while losing will make you lose some, based on the Points difference between you and your opponent. At the end of each week you will earn Gems based on your current Rank. You can also challenge people to Friendly Matches, which will cost you nothing, you can test your squad for PVP and practice with it, to make sure you can defeat your future opponents.

3. How To Get The Most Out Of Your Units

Soul Stones are what you need to Power Up your characters, to Evolve then, and finally to Awaken them. It’s how your characters earn extra stars, and they are how you can progress through the story. It’s always better to have a higher leveled lower tier character than a lower leveled higher tier character. This is also one of the reasons you shouldn’t spend too many gems on Summoning early if you are a f2p player, the level cap on high level summons will be impossible for you to raise early, it’s better to just focus on characters that are easier to Power Up and Evolve.

Awakening is a completely different beast. Awakening should be avoided until the very high levels of the character, at the very least you will want your Skylander to be level 50 before even considering an Awakening, and oftentimes 60 is a more appropriate level, make sure to read and understand how Awakening boosts your character’s skills before doing it. In general the best way to spend Gems to maximize your efficiency regarding your game as a f2p player means spending them on Energy. While at the start it might feel like you have all the Energy you’ll ever need, the game stops giving you free Energy after a certain while, so you’ll actually have to make the most of the current Energy cap you’re at. Since the game involves a lot of passive grinding you’ll want to make sure you can afford running through dungeons with the 10x feature multiple times, and that requires massive amounts of Energy even just at the Normal difficulty level. Also do not forget to set Spectators for every fight to earn Experience for your lower level units, the Spectators’ experience is given separately so it doesn’t cost you anything to have them.

4. Runes Are Vital To Your Success

Each one of your Skylanders can equip up to 6 runes, and they are a significant part of your character’s build. Runes have 4 different tiers: Normal, Premium, Rare, and Heroic. For each tier, they gain an extra ability, usually boosting additional stats such as Critical Chance or Evasion. Runes also come in 3 different levels, indicated by Stars, an higher Stars count on your Rune will make it exponentially more powerful than an equivalent Rune with lower Stars count, so make sure to invest in 3 Stars runes. 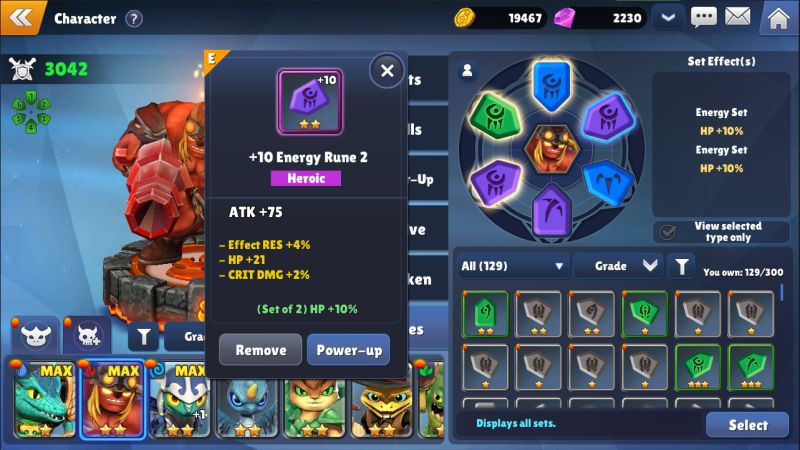 You can boost runes by spending Gold, but beware: boosting up a Rune’s level can fail, and if it does, your Gold will be wasted. This makes boosting high level rune quite costly, as you will incur in a lot of failures, and the price is quite steep when your Runes start to reach level 10+, although it is very well worth it. If you are having trouble getting past a level, Runes are the first thing you should look at, since they have the ability to double or even triple your Skylanders’ base stats. You can farm new runes in the Labyrinth levels of the Distorted Dimensions. You also get runes just by clearing the regular levels, although these runes are the weakest ones and not worth leveling for the most part.

Skylanders Ring of Heroes is a game that requires a lot of grinding to get the most out of it, so if you want to proceed at an acceptable pace, and eventually become competitive, you will have to make sure you’re always farming towards something. Whether it’s 10x farming levels for Soul Stones and Experience, or progressing through the Labyrinths and the Dungeons to gain materials to further boost your characters, you need to spend some time on the game. You’ll have to balance actively progressing through the various worlds and just grind the same level over and over for experience and materials. As already mentioned in the guide, this is also how you should spend your Gems: to maximize your activity. It is by far the most efficient way to keep the ball rolling and keep the progression going smoothly. Also do not forget you can upgrade the buildings in your Hometown to further improve the resources production while you’re away. Luckily the game past the very early game proceeds mostly on idle, excluding the aspect of boosting your units, so you can just leave it to do its thing while going on with your day.

6. How To Fight Bosses

Boss fights are very challenging in Skylanders Ring of Heroes, and often requires your full attention. Every boss fight is different, as different bosses are weak to different elements, and your squads will also be different each time, but generally the best way to proceed is to hit the smaller mobs that are in support of the boss. 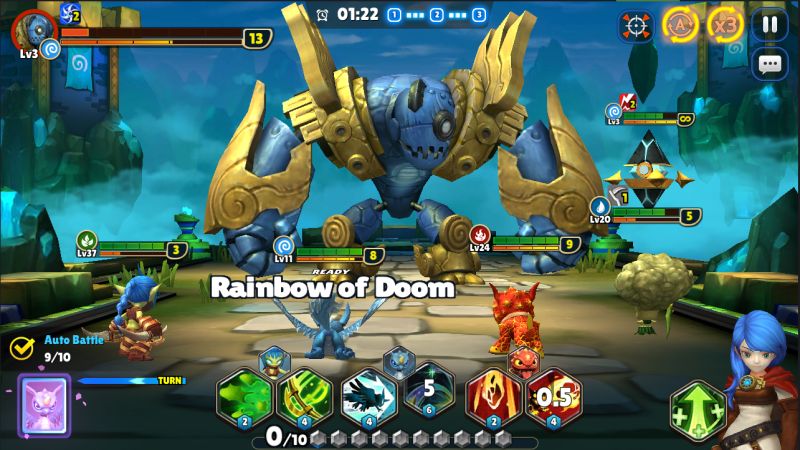 The reason being that, while the mobs themselves don’t do much damage, they usually either empower their boss, or they place annoying debuffs on your team. They are also very quick to get rid of, and you can then focus on the Boss afterwards without distractions. All bosses have charged attacks: very powerful attacks that take up to 10 seconds to charge, after which they will release a devastating move that deals massive damage to all of your units. You can prevent this to happen by knocking them down before the charge ends, for example by dropping their Endurance to 0. Boss fights generally require you to use your party’s abilities to their fullest potential, and that’s what makes them so exciting.

7. Keep An Eye On The In-Game Events

There’s always an event running, and events mean extra rewards! You can access the Events section from the menu on the top right of your Hometown. Events allow you to earn extra rewards by completing certain tasks. Another bonus you get is the “Bonus Time”, it happens every day, it lasts for an hour, and in that timeframe you get an Experience bonus by completing battles in certain Worlds.

Lastly, you can add event codes to your game. In order to do so, all you have to do is scroll down to the “Event Coupon Exchange” from the Events menu. Here are the codes that you will have to enter, the rewards will be immediately sent to your Inbox. By doing this, you will earn:

Here are the 5 codes, make sure to let us know in the comments if you know of any other code!

This wraps up our advanced guide for Skylanders Ring of Heroes. We hope you found the advice in this article useful. This game is very rewarding, there’s a lot to do, and yet it never feels overwhelming. The idle farming time is still fun despite the hand-free approach used, and it’s very satisfying to see your units become progressively stronger. Let us know in the comments about any other useful tips or tricks you found while playing Skylanders Ring of Heroes!