Push’em All is yet another fantastic game from the masters of casual gaming, Voodoo. We already reviewed several of the French company’s hit mobile titles, such as Castle Wreck, Pokey Ball and Uphill Run to name a few. Once again, the folks over at Voodoo applied the same recipe to this game: combine simple graphics with addictive gameplay. In other words, you will not be able to leave your phone for a second while playing Push’em All, it’s that good.

While playing Push’em All, players will go through a series of demanding missions. The goal of the game is to clear out the path across the platform and push the enemies into the abyss. However, this could be easier said than done. So be sure to check out our Push’em All guide, as it comes with loads of useful tips, cheats and strategies to crush your enemies. By following these guidelines, you will survive the challenges and wipe out the zombies. 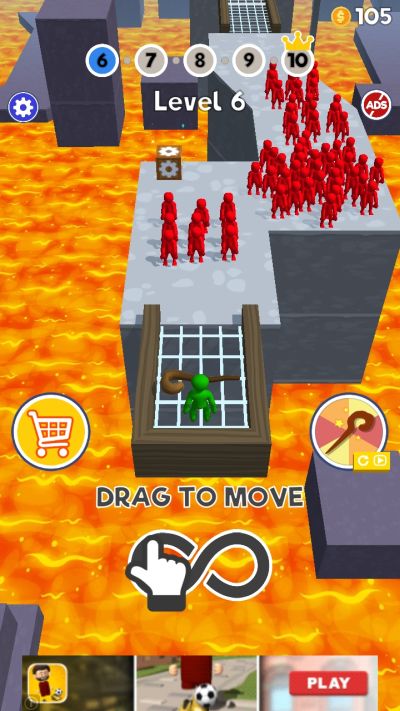 The concept of Push’em All is simple, and the title of the game pretty much explains the whole deal. In other words, you will use different tools to push the zombies out of the way and get from point A to point B. Of course, this oversimplified explanation hides a lot. For instance, we didn’t even mention the fact that your avatar could also plummet to death if you are not careful enough.

To be precise, the playing area in this game will shrink as you move through the levels. Less available space means that you will be forced to tiptoe around the gaps in the ground. One wrong step and you could fail the level. So, make sure to walk around in a slow and controlled manner. Never get dragged into a chase with the zombies and stay away from the edge as much as possible. Keep your cool and decimate the opponents without risking too much.

2. Push Every Single Zombie Out O The Way 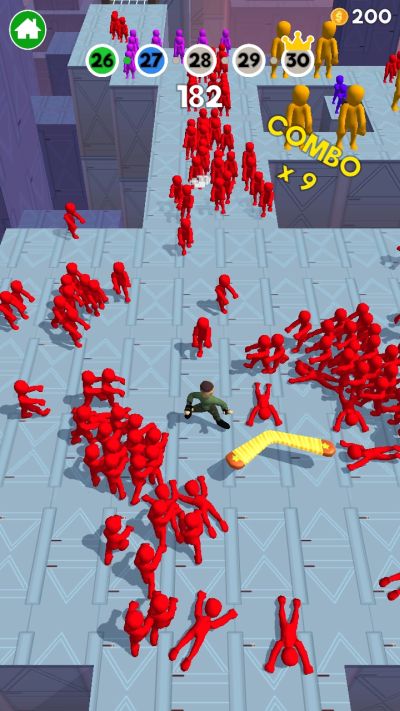 As you climb the ladder, more and more zombies will stand in your way. After a while, an entire army of red and yellow soldiers will try to stop your progress. What’s more, the zombies in Push’em All will come in all shapes and sizes. The red ones are the most common, but yellow giants and blue shooters will also appear on the platform.

Even though you could run through them and reach the finish line without destroying all of them, we recommend a different approach. Instead of rushing through the levels, take your time, and wipe out every opponent. By doing so, you will maximize the rewards and earn more coins. If you clear out the zone, the game will reward you with the full package. Also, your run will not have a limited duration, so you don’t need to hurry and rush to the next stage. Send every zombie over the edge and then step over the finish line.

3. Use Hints To Find The Zombies

To clear out an entire zone in Push’em All, players need to be meticulous and ruthless. In other words, you cannot show mercy to the zombies. Every one of them must plummet into the chasm. But the shape of the platforms at some levels could make you lose count and forget about some enemies. As you rush through their ranks, some will stay behind or to the sides of the playing area.

So, to collect the maximum rewards, you will need to find every zombie and topple them off of the platform. To do so, we recommend that you rely on the red directional arrows. They will serve as hints and point in which direction you should go to find the remaining zombies. Follow the arrows and locate the guys who are still trying to take you down. Surprise them and use the boomerang or the rocket launcher to send them flying over the edge.

4. Fill Up The Combo Meter 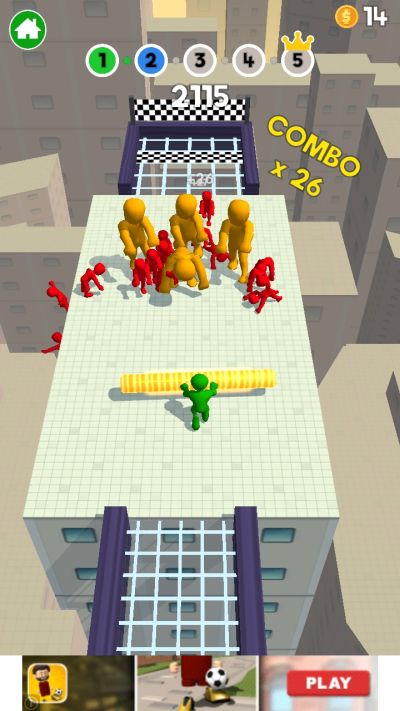 In Push’em All, you will have the opportunity to use all sorts of weapons. In the early stages, a wizard’s rod will be at your disposal. Later on, boomerangs and spinning blades will also become available. Either way, these tools will help you push the zombies out of the way. At the same time, each weapon will serve as a shield, blocking the enemy attacks.

By tapping the screen, players can trigger the Specialty attack. Every weapon comes with a different ability. Nonetheless, you should always maximize the effects of this powerful attack. But before that, players will need to fill up the meter and gather the energy for the Specialty.

So, try to connect as many kills in a row as possible. If the zombies fall over the edge in quick succession, the Combo meter will quickly charge the Specialty skill. For example, the boomerang will turn into gold. At that moment, tap the screen and obliterate almost every zombie on the platform in a single strike.

5. Learn How To Use The Traps To Your Advantage 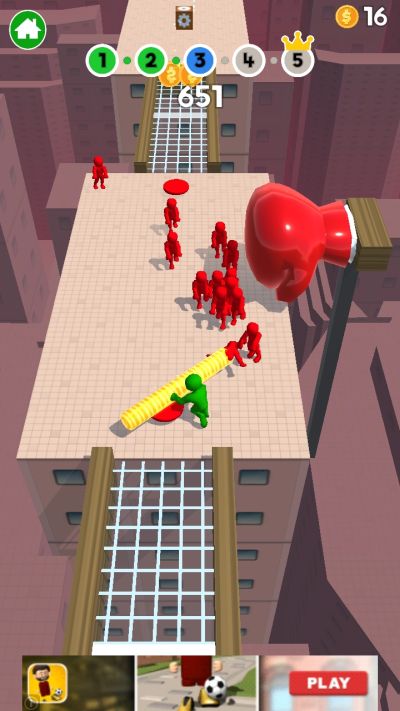 Besides being sky-high and super-narrow, the platforms in Push’em All will come with a set of traps. So, you will have to double-check every step to avoid falling into the gaps or activating some dangerous device. At the same, these gadgets can be an excellent addition to your efforts to exterminate zombies. In other words, players should learn to harness the power of the traps to their benefit.

For instance, most gadgets will help you decimate your enemies effectively. All you need to do is to observe the patterns and learn how to activate the trap. In most cases, your avatar will need to step on a red button somewhere on the platform. As a result, a fly-door will open and then close in a flash. Or, a giant fist will come in like a wrecking ball and annihilate everything in its path. Either way, the traps can be your ally, but also your enemy. Thus, try to understand their mechanism and act accordingly.

6. Take Down The Shooters First

As we said, the shooters will be one of the categories of enemies you will face. Their color is blue, and unlike some other types of zombies – they do not move much. Instead, they stand in one spot and fire missiles in your direction. If you get hit by the bullet, you will be pushed back. In the worst-case scenario – the shells will make you fall into the abyss and fail the run.

So, we recommend that you go after the shooters first. As soon as you step onto the platform, head towards them, and make them a priority. Also, try to avoid the bullets along the way, or face them directly with the weapon in your hands. This strategy will reduce the effect of the shots. After you deal with the shooters, focus your attention on the pink zombies. They are the fastest ones, and this means that they can quickly go behind your back if you are not careful enough.

7. Take Your Time And Collect All Coins

The only currency in Push’em All is gold. To be precise, players can collect golden coins and then spend them in the Shop. In the next chapter, we will explain how you can splash the cash and invest the coins. But first – let’s learn how to maximize the yield and collect as much gold as possible.

Well, we already mentioned one method – clear out the zones. If you push every zombie over the edge of the platform – you will receive a reward. On top of that, the boss fights will offer plenty of gold. These fights appear after every five levels, and each battle consists of three separate stages. If you manage to survive the onslaught of zombies, gold will pour in. With that said, we recommend that you take your time and collect every single coin. Walk around the platform and grab the gold before you proceed to the next level. 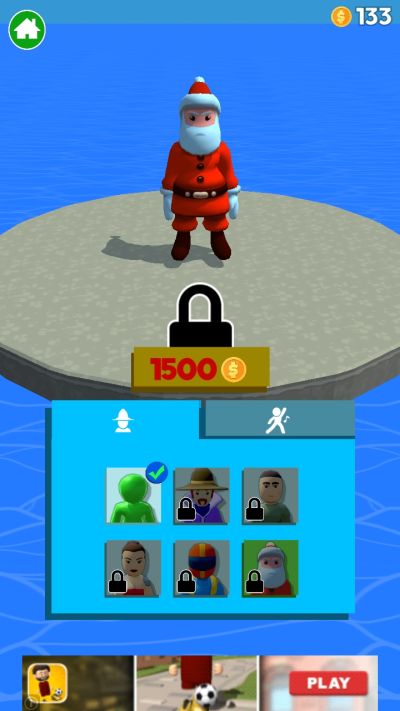 Push’em All does not come with a fancy aesthetic. On the contrary, the simplistic design of the game offers a clean and polished look. Nonetheless, players have the option of changing certain aspects. For example, you can buy a new skin for the avatar. Or, you could spend the coins on a unique celebration. Either way, these little details can make the game more exciting and more enjoyable.

To buy a new skin or a new move, head over to the Shop. The shortcut for this section is visible on the left-hand side of the lobby screen. Once you enter this area, browse through the collection of skins or celebrations. If you find something that suits your style, check if you have sufficient funds in your bankroll. If yes – splash the cash and equip your avatar with a fresh new look. If not – clear out some more zones and destroy more zombies.

With the final advice, we conclude our compilation of Push’em All tips, cheats and strategies. However, if you are aware of other strategies for the game, don’t hesitate to drop us a line in the comment section!

Same here. However quickly I complete a level it’s always 2. I have even done a few zones with just one use of the weapon. I am on level 2222 x

I am only getting 2 stars at the end of each level not 3 why not ??

What are the pets all about? I am over level 2000 and I thought I would have gotten something and I noticed the pets. I have them all and as far as I can tell, they do nothing. What do you do with coins if you have purchased all characters and pets?