If you ever wondered what it is like to be on a demolition team, Voodoo’s new mobile game Castle Wreck will provide you with the first-hand experience. Voodoo, which is the name behind hit mobile titles such as Ball Blast, Crowd City and Paper.io 2 to name a few, is back with yet another addictive game in the form of Castle Wreck, that’s available now for iOS and Android devices. As the title implies, you’ll be sending the wrecking ball right at the heart of medieval chateaus and mansions.

But those old structures are well-known for their sturdy and rugged features. In other words, it is not easy to demolish a fortified citadel. Even so, our Castle Wreck cheats, tips and tricks guide will help you destroy the towers in no time. Every missile you send at the target will cause maximum damage. So, let’s move on to our Castle Wreck guide to learn the secrets of the castle-wrecking job.

History books are filled with siege stories. As we all know, the ancient castles were frequently under siege. Also, the duration of those battles could extend to several years, if not more. The reason for this is simple – stone walls and high outposts were virtually indestructible. 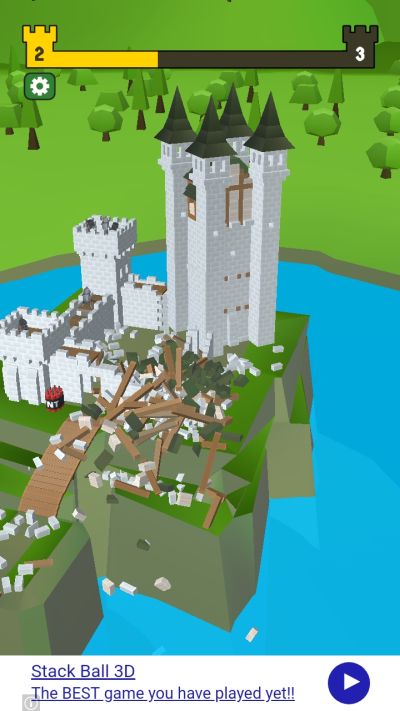 Yet, castles can fall down. You only need to hit them at the weak spots. When playing Castle Wreck your cannon will shoot out powerful missiles. Of course, your job is to direct the artillery barrage and send the shells to the right spot. That is why we advise the players to take their time when preparing the shot.

At the start of every stage, take a moment to examine the features of the castle. By performing a brief analysis, you can discover how you can obliterate the chateau. After all, the Castle Wreck does not feature a timer. You can spend days thinking about the next move. So, don’t rush the process.

When playing Castle Wreck, you will have a limited amount of missiles at your disposal. In a way, this could cause problems for some players. But, we are here to help you with this issue.
In the upcoming chapters, we will elaborate more on the mechanics of the gameplay. You will learn how to target certain areas of the structure and how to maximize the damage. For now, let’s just say that a limited number of shots requires strategic thinking and careful planning.

By making every shot count, you will get closer to the goal. Needless to say, the goal of every stage is to make the castle crumble to the ground. The yellow gauge at the top of the screen indicates how much damage you still need to inflict. With 6-7 missiles per stage, some fortifications may be a tough nut to crack. Therefore, make sure that you do not miss the battlements all together.

Your cannon may be a powerful weapon, but some Gothic castles can be more resilient than they seem. Their haunting beauty often masks the rugged and durable structure. As a result, your 6-7 shots may fail in delivering the required amount of damage. When that happens, the game provides players with a convenient solution. 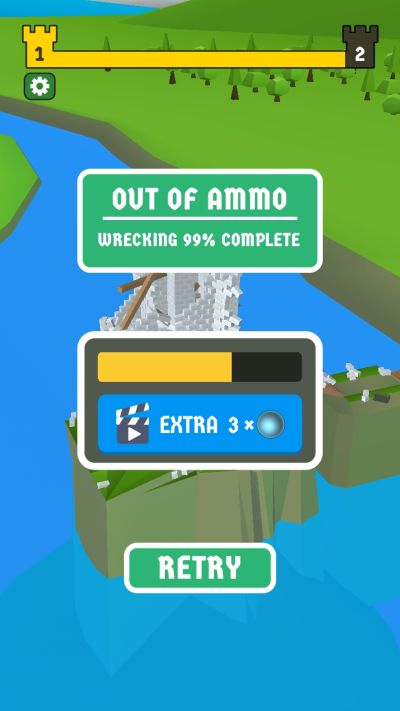 In other words, Castle Wreck will give you 3 more missiles. The only thing you need to do is to watch an ad. By watching the video, you can get the opportunity to finish the job you started. Three more shells should provide your howitzer with enough power to take down even the most durable of towers.

We advise the players to always grab this bonus when the game offers it. Above all, those three new shots could help with completing the particular stage. If that happens, you will not have to start the mission from scratch. All of your progress will not be lost. That is why Extra shots are a generous and convenient feature.

Modern-day artillery is full of high-tech gadgets and gimmicks. All those devices allow the tanks and cannons to hit their targets with pinpoint precision. Consequently, these weapons can cause a lot more damage than the classic ones. 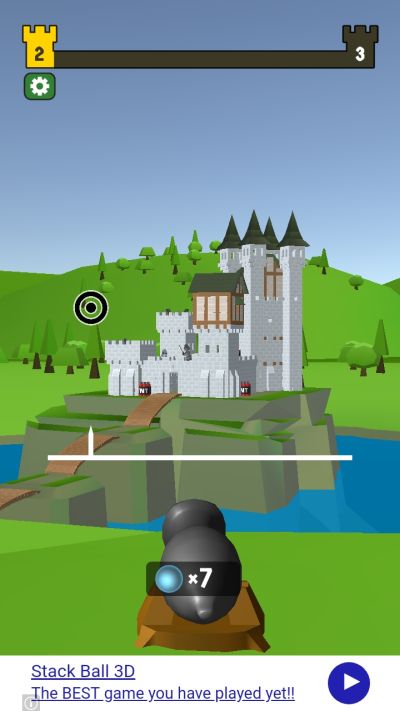 But, Castle Wreck relies on an ancient-looking cannon. Even though this weapon can send out massive shells, it is clear that the device comes with manual control. In other words, players have to adjust the coordinates and send the shell at the right spot.

When preparing for the shot, your first task is to align the horizontal slider. The horizontal slider has a needle that travels from left to right. During some missions, this slider will move much faster than in others. Either way, make sure to tap the screen at the right place. Unfortunately, there is no Undo button with Castle Wreck. As a result, try to be as precise as possible when adjusting the horizontal axis.

In a similar way, the vertical axis plays an integral part in determining the quality of your shot. Therefore, you will need to know how to adjust this parameter as well. 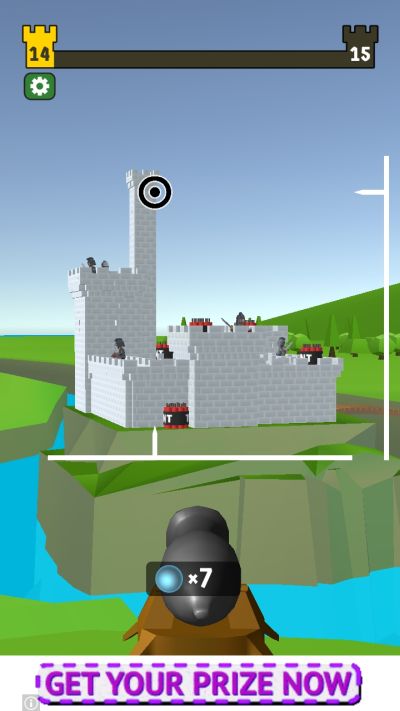 First of all, the slider will be located on the right-hand side of the playing screen. To clarify, the gameplay always asks you to align the horizontal axis first. After that, it moves on to the vertical one. So, once you determine where the shell will go, you will need to set the height of the shot.

As we all know, Gothic cathedrals and castles can reach spectacular heights. On one hand, this leaves you with more space to aim for. But, the height of these buildings also means that they can collapse in an astounding fashion. You only need to hit the fort where it hurts. That is why our next tip will let you in on the secret. In other words, you’ll learn how rustic castles can tumble down like a house of cards.

6. Target The Lower Parts Of The Towers

Even if the mansions in Castle Wreck are not historically accurate, they are still designed in a magnificent way. Yet, the elaborate structure of the castles could be both a blessing and a curse. What we mean by this is that these fortresses come with impressive aesthetics. But, this also means that they come with certain weak spots.

Of course, you will show no mercy to the stone structures when playing Castle Wreck. Moreover, your goal will be to transform the medieval battlements into rubble. The best method for reaching this goal is to rely on the basic laws of physics.

You don’t have to be an architecture student or an engineer to know that buildings tend to collapse when they lose support. Thus, every missile should target the lower parts of the gatehouses or turrets. If you manage to hit the low area of a tower, the entire building will shatter into thousands of pieces of debris. As a result, you will move on to the next level.

As we all know, modern-day demolition jobs rely heavily on the use of explosives. Well, Castle Wreck allows you to do the same. As a matter of fact, TNT will be one of the primary tools for bringing down massive castles.

While playing Castle Wreck, you will notice brightly colored barrels of dynamite. At first, it may seem that they are scattered around in a random fashion. But, you will soon realize that this is not the case. The barrels of TNT are located in strategic spots. So, by hitting one of them, the detonation will tear a wound in the body of the castle.

We advise the players to always look for the position of the TNT when preparing their shot. In fact, their every missile should be directed at the red spots in the distance. By triggering the detonation, the players will be much closer to reaching the goal of obliterating a certain castle.

Experienced gamers are well aware of the importance of Combo kills. Well, Castle Wreck is a simulation that also allows for compound attacks. The principle behind this is simple – try to cause a chain reaction. In other words, you need to hit one TNT and cause a blast. As a result, a nearby TNT barrel will also explode, leaving a trail of destruction and wreckage behind. 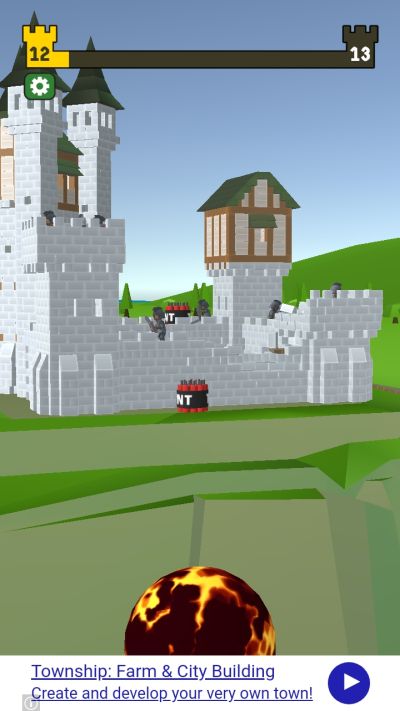 Combo attacks in Castle Wreck are easy to achieve. The game often places TNT barrels close to one another. Furthermore, the explosions can be activated by the debris. What we mean by this is that the falling citadel can cause another TNT discharge to explode. From one detonation to another, the poor castles do not stand a chance.

On top of all that, the game features a slow-mo sequence called the Perfect Shot. Once you become the master of the artillery barrage, the game will indicate that your single shot will bring down an entire castle. These shots will also feature a flaming missile. Not to mention the fireworks that you will set off across the moat.

With the final tip on our list, we conclude our in-depth Castle Wreck guide. If you happen to know any other Castle Wreck cheats, tricks or tactics, please leave us a comment! 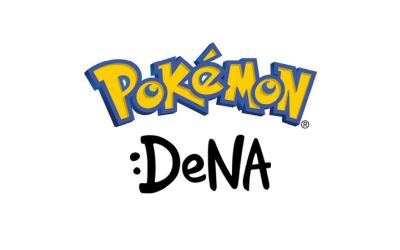 Previous
New Pokémon Mobile Game to Be Launched in March 2020 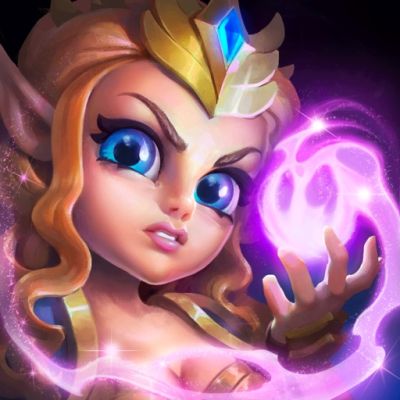 If you dont want the ads while playing turn off the phones data before starting. I'm at 4800 and nothing ever changes. Been hoping for a nuke in the special weapons area by now but one is still blank. Would like to know if the game ever ends. Guess it's just a time killer.

Are you talking about the laser, blast bomb, etc? Those add to your total available shots. I am at level 4540. I can't figure out if there is anything you can do with points.

I’m at level 11553 and I have gained 246000 gold coins... my question is how can I gain the gold coins faster and eliminate those other chests with the meaningless symbols?