Anyone that has played Light of Thel, knows that it offers a plethora of content. As a mobile MMORPG, this much content can be a welcomed idea/sight. Some may find this as a bit overwhelming and some may find it as wonderful. In any case, this amounts to massive loot for you.

Included with all the ways to gain loot are treasure maps. Some treasure map hunts are completed as easily as tapping the button. Others are not so easy to deal with. In this new Light of Thel treasure map guide, we’ll give you all the details to help maximize your gains.

Note: All treasure maps give rewards randomly. You could end up with something great. You could also end up with nothing and/or just silver. Either way it’s not a waste of time mostly because of the hidden benefits. Also note that the treasure maps can all be gained for free.

When you see the loot list for the treasure map S, you’ll notice that it’s not an overly large list. However, you can easily see that some of the loot you can gain is definitely worth the effort. The bad news is that most or everything you loot from the treasure maps will be bound. So you can’t sell it in the Trading Post. The good news is that you’ll have some less buying needs from the Trading Post. 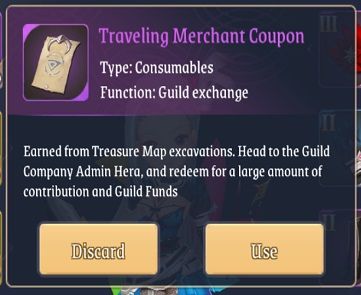 As for the “effort” of dealing with the treasure map S, you’ll notice that it’s fully automatic. Just click the Use button and when your character stops moving, you’ll see the Dig button. 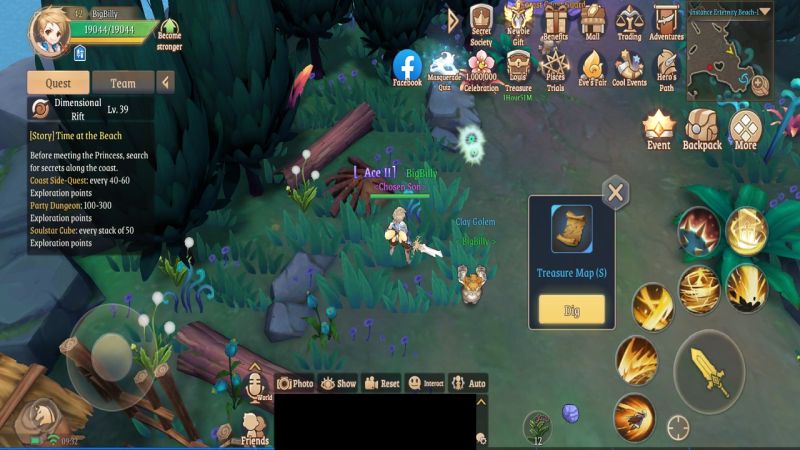 Tap the Dig button and start hoping for the best!

The idea is similar with the treasure map Ms. Unfortunately, it’s not so automatic. 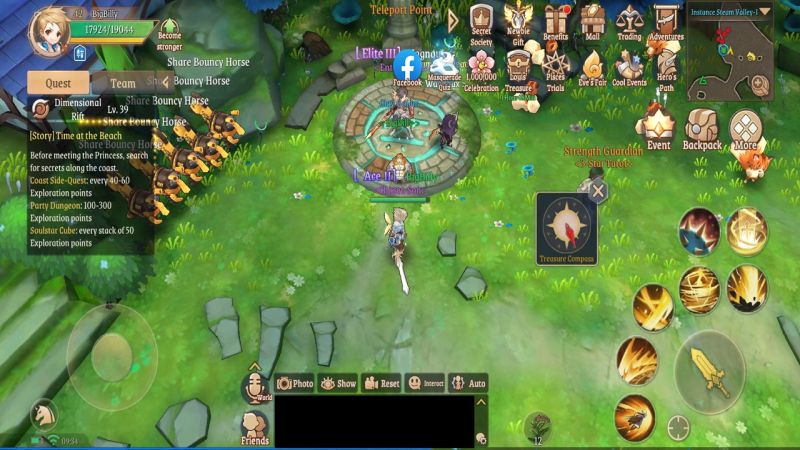 Instead of automatically going to the treasure’s location, you’ll see a compass as showing in the above screenshot. The Light of Thel devs didn’t want everything to be a big giveaway so get to running! Thankfully it’s still a pretty straightforward idea. Simply follow the compass until you see the Dig button. The best way to know you’re close is when you see the compass turn in the other direction quickly. 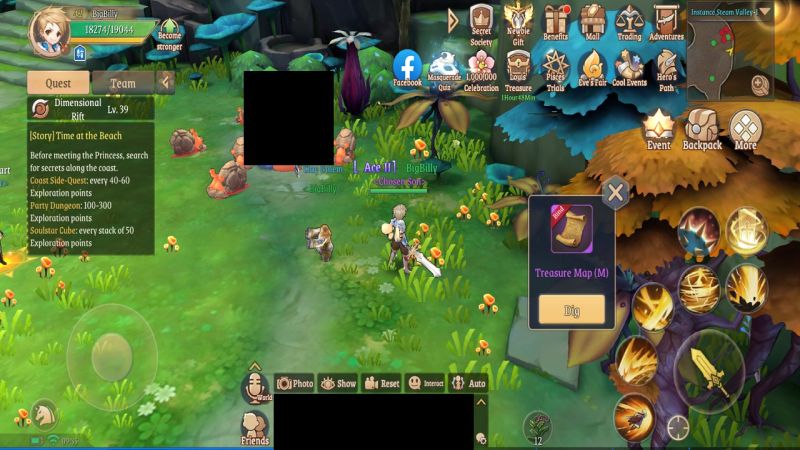 Related: Light of Thel Class Guide: Everything You Need to Know About Each Character Class

You also won’t get them so easily/readily from rewards. Also note that you generally have the same chances to gain Legendary ranked items from each treasure map type. Lastly, if you have to ask, you clearly missed the hidden benefits of the treasure maps S and M.

The Hidden Benefits Of Treasure Maps S And M

The hope now is that you didn’t think the Light of Thel devs were getting lazy about things. They were nice enough to include some benefits in the treasure maps S and M. Of course, if they made them easy to figure out, they wouldn’t be so “hidden”, would they?! There are in fact 4 hidden benefits. The first 2 are fairly obvious. They’ll show up as rewards. One of them is in the Achievements of the game. Ok, that one isn’t exactly a gigantic reward but it’s still more loot for you!

The other obvious one is in the Events of Light of Thel. 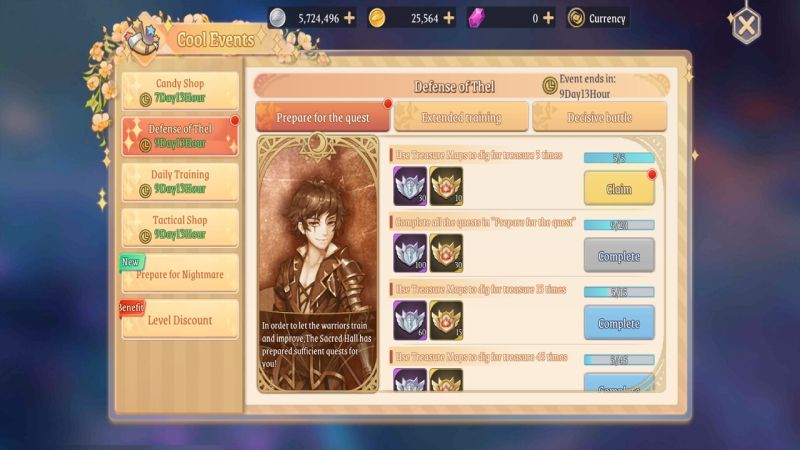 That particular hidden benefit might not seem so hidden but the rewards are a lot more worth it. This one is listed as the second “obvious” one since the little red dots show up indicating you have rewards to collect. Yes, very much like the Achievement rewards. That’s all well and wonderful but how about the not so obvious hidden rewards?

As it turns out, you’ll be doing a lot more running around while using the treasure maps S and M. What did you think would happen while doing all that running around? If you guessed you’ll end up gaining the hidden benefits, you guessed right! The first one happens to be a very sought after set of treasure boxes found all over each map. 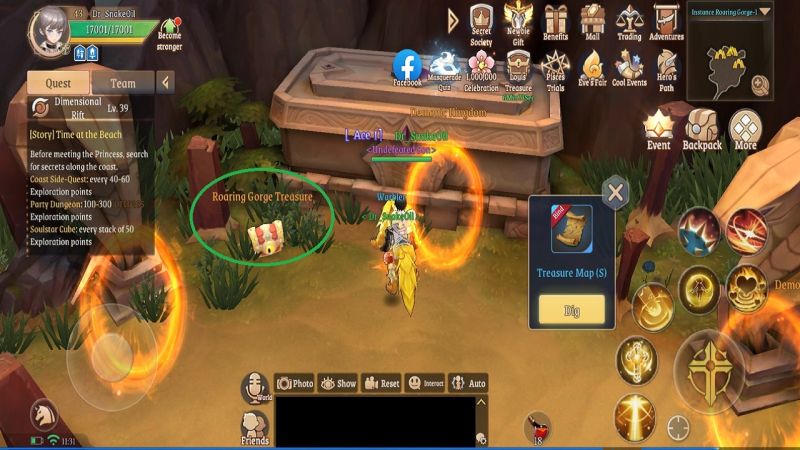 Yes, you’ll have an excellent chance of finding all the treasure boxes of each map. From there, it’s a matter of having some of the Story Mode quests going in that map so you can loot those boxes. You’ll be amazed how many you can find while automatically running all over the map!

The other hidden benefit of using treasure maps S and M is also included in the running around the maps. Check your Exploration Level. 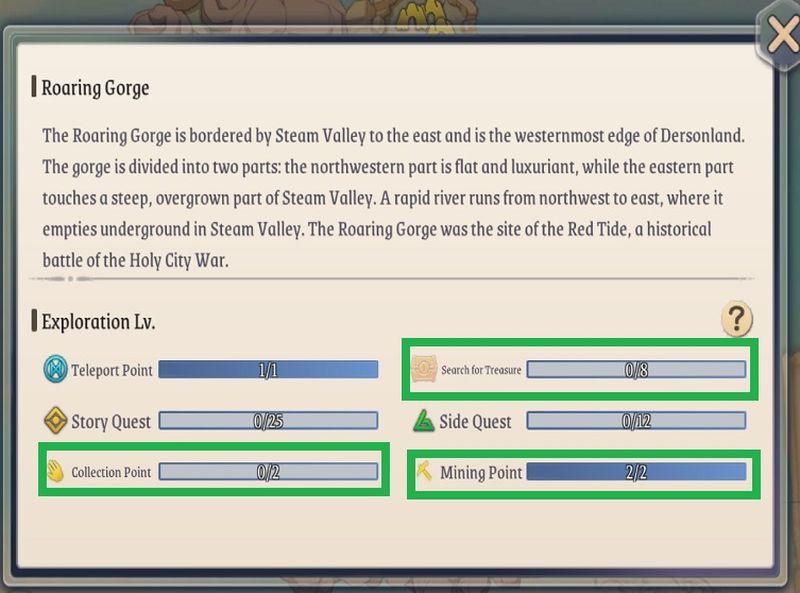 As part of completing your Exploration Level and gaining titles and rewards, you’ll need to find 2 Mining Points and 2 Collection Points on each map. This is used with your Life Skills so you have places to gain those things from. In order to gain the Mining and Collection Points, you have to get within range of those points. Initially, they’re not showing on the maps. You’ll have to find them manually (or accidentally!). So naturally, what’s the best way to do that? Thanks treasure map S!

The treasure map L is the one most would want to use in Light of Thel. These treasure maps offer up the best rewards. Unfortunately, they’re the hardest ones to gain from. 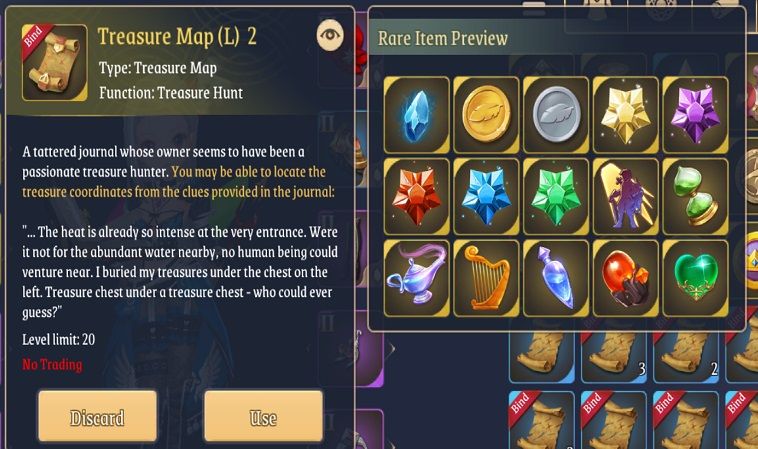 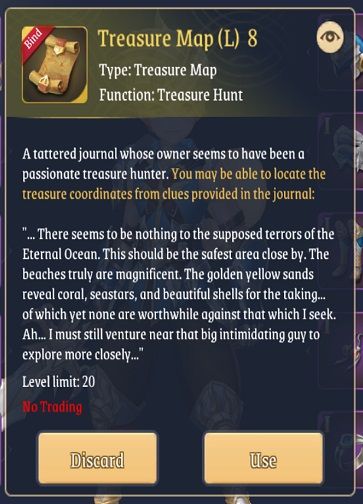 In the above screenshot you’ll see treasure map L 8. The treasure map L is the one where you have to use the given clue to find the digging location. Too bad they don’t give the exact coordinates nor do they give great details. So there’s an excellent chance that you’ll be searching forever for the digging spot. 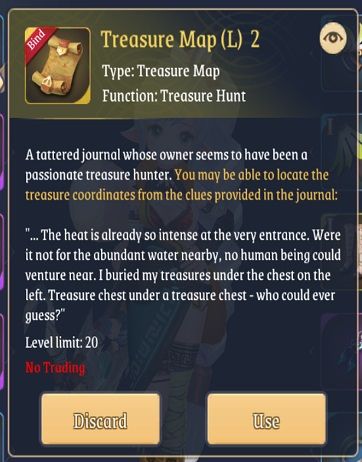 The good news is that the digging locations are spread across 3 maps only. This includes: Steam Valley, Fluoro Forest, and Eternity Beach. So it won’t take long! The bad news is that the Use button doesn’t switch to indicate you’re in the right spot.

So here are all the treasure map L locations from 1 to 9. Get into the map in question and look at the screenshot. Pay attention to the given coordinates. The good news is that you can still get the loot from being in the immediate area. This means you can be a few points off (1 or 2) on the coordinates and still get the loot when you click the Use button. To see the coordinates tap the “+ magnifying glass” icon on the mini map. It’s on the mini map’s lower right corner. Those with larger fingers may have difficulty tapping on that. 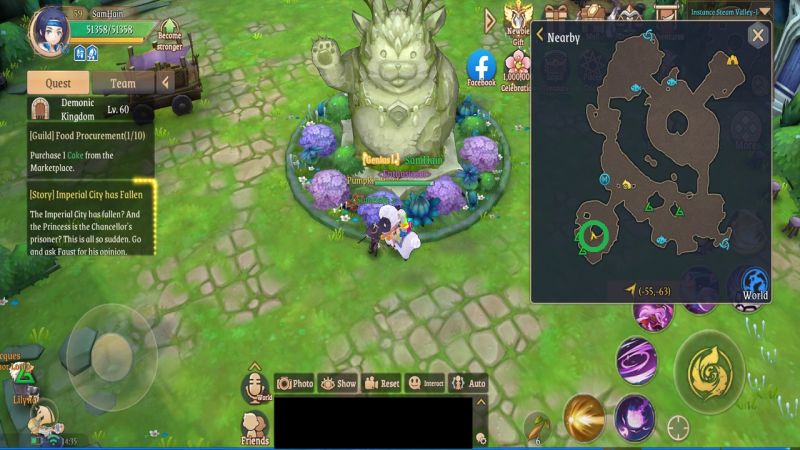 Treasure map L1 is found near the big cat statue in the lower left area of Steam Valley. Check the green circle in the screenshots. You can auto move to the location from the coordinates map too. 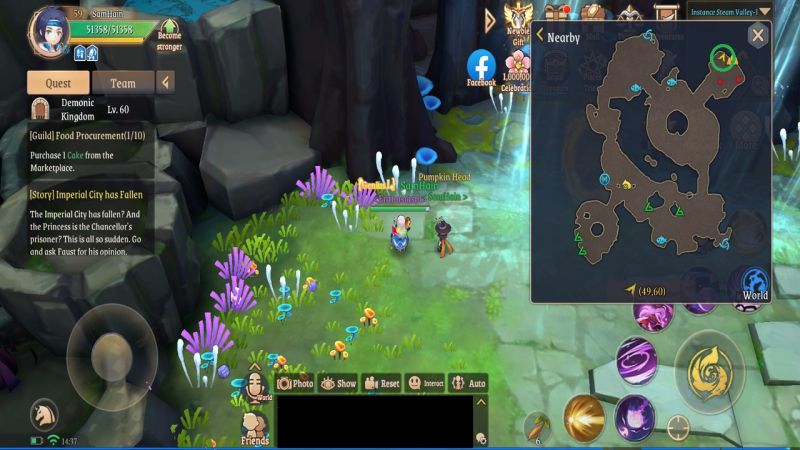 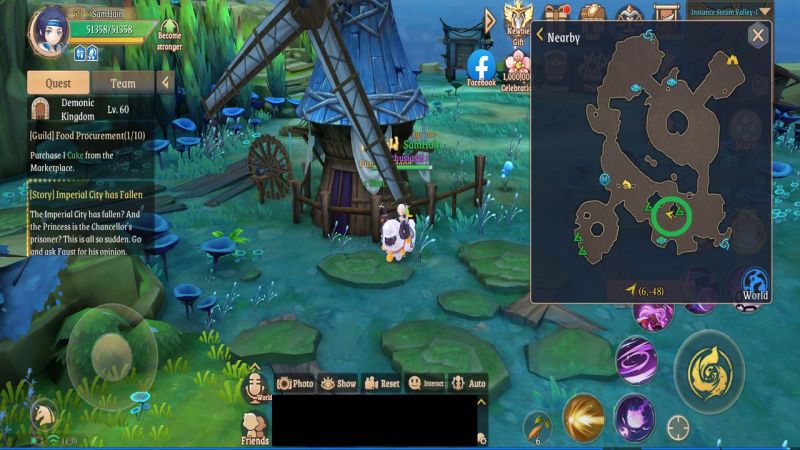 Treasure map L3 is found in Steam Valley in the lower middle area. Yes, there’s a big windmill there! 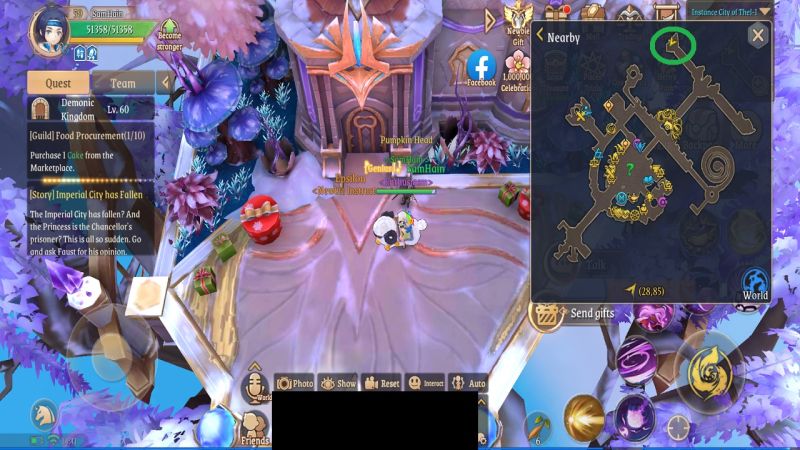 Treasure map L4 is found on Epsilon’s left. Tap the mini map and click on the Return to the Main City button found on the left side. It’s above the Side and World Quest listings (depending on the map and your level). Sorry, the cannon won’t help you get to Epsilon! 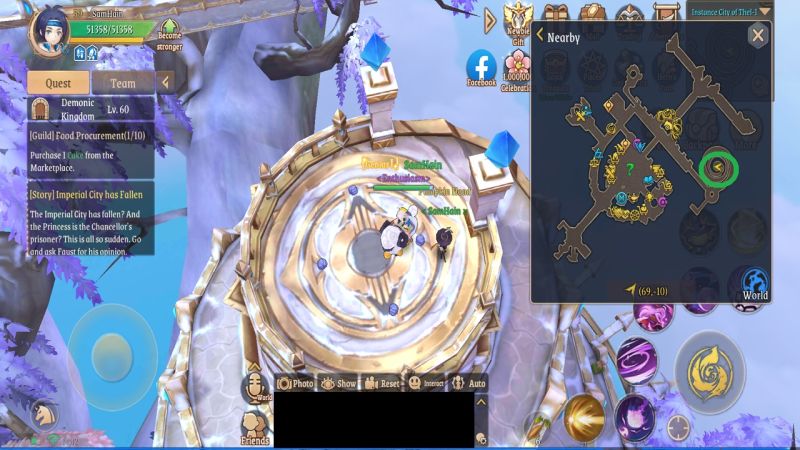 Treasure map L5 is also found in the City of Thel. This time, simply get to the top of the long spiral tower on the right. 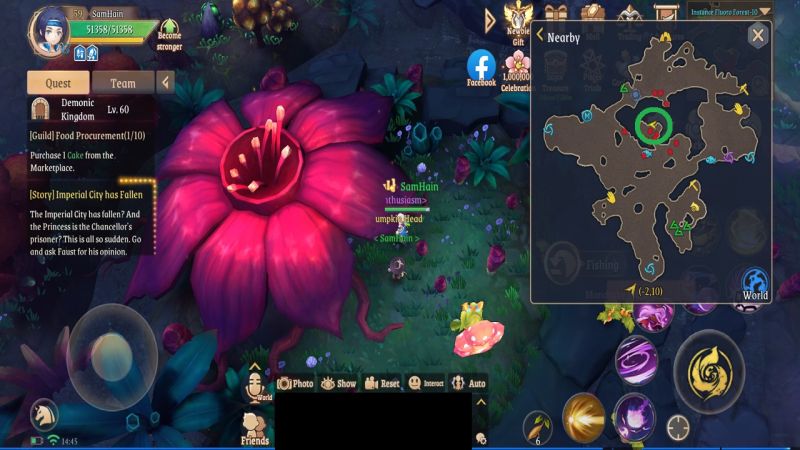 Treasure map L6 is found right around the middle of Fluoro Forest. If you have the items, you can catch a sprite here too. 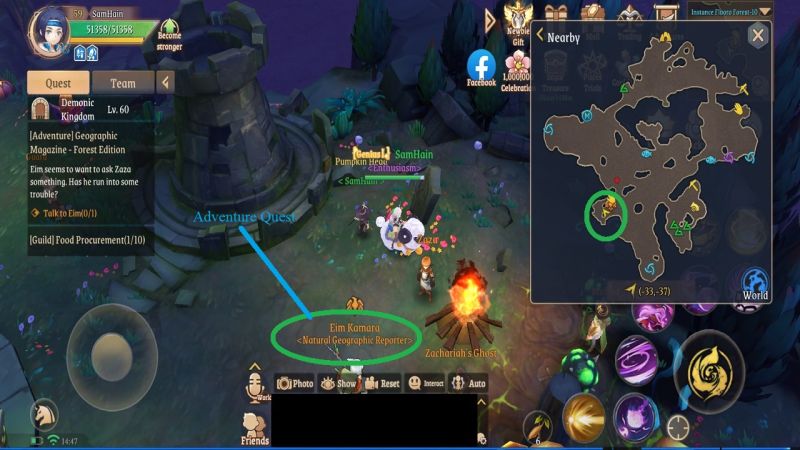 Treasure map L7 is also found in Fluoro Forest. The good news is that this one runs you within range of Zaza. That’s one method to trigger that Adventure Quest. Those quests have some nice rewards so take care of it if it shows up for you. 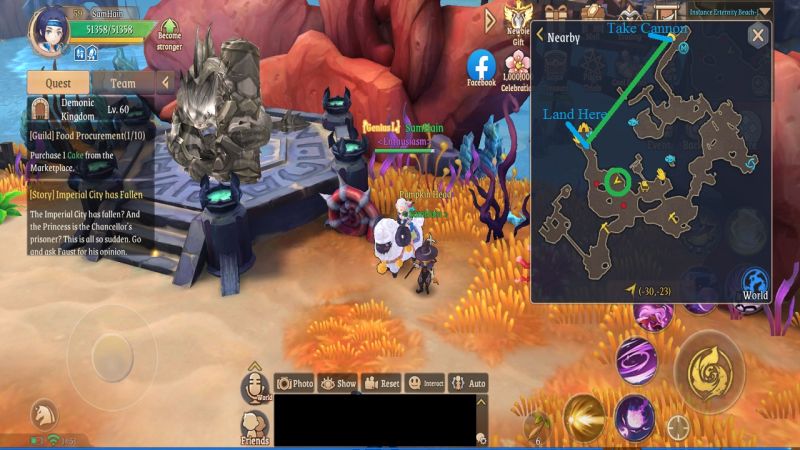 Treasure map L8 is found in Eternity Beach. The fun part is that there’s a short cut to get to it. Check the description in the screenshot above. Just use the Cannon to get there. 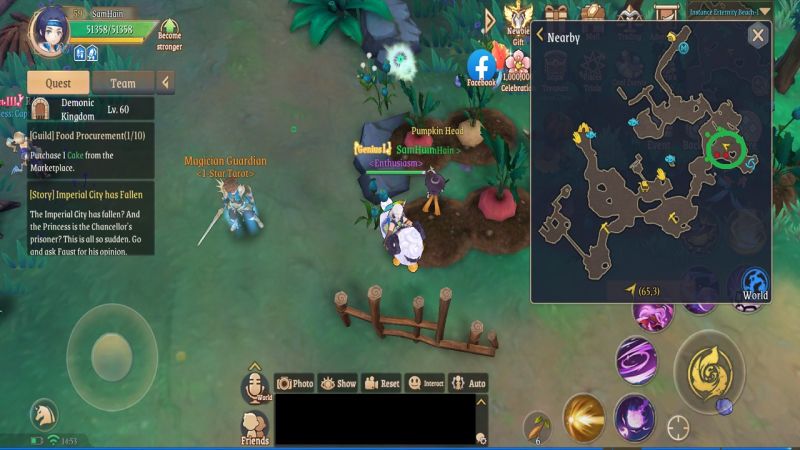 Treasure map L9 is also found in Eternity Beach. It’s where the “farms” are. While you’re there, if you feel like getting in some Tarot Challenges, you’ll already be there!