With its minimalist design and straightforward gameplay, Idle Tap Strongman is an ideal mobile game for those of you who want to kill some time. Developed by Neon Play, the company which is responsible for titles such as Idle Tap Racing and Traffic Panic, this game relies on the well-known concept of tapping the screen to earn more money. However, there is more than meets the eye with Idle Tap Strongman. Of course, you will be able to discover all the secrets of the game if you download it to your iOS or Android device.

1. Tap The Screen To Make The Dummy Go Faster

The basic premise of Idle Tap Strongman is based on a dummy that drags a certain load. Since this spectacle attracts a lot of people, they will reward you with cash. Needless to say, the goal is to collect as much money as possible. In the upcoming chapters, we will elaborate more on the importance of money in this game. Also, we will show you how to spend cash in the best possible way. 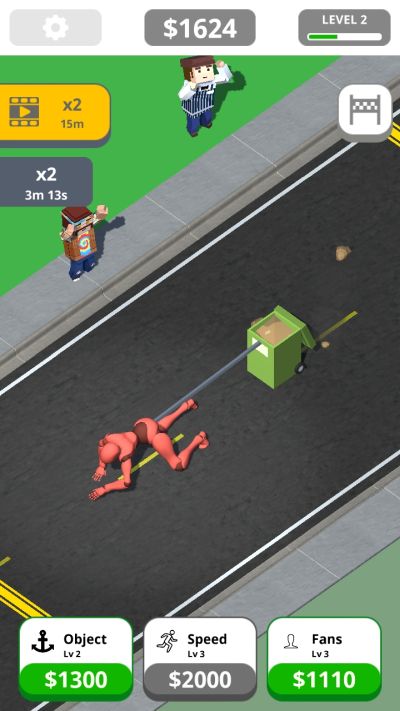 For now, it is important to note that you can boost the speed of the dummy. By tapping on the center of the screen, you can make the strongman run faster. As a matter of fact, the dummy will slow down into a crawl if you do not ‘force’ it to move faster. Therefore, tap the screen every couple of seconds to keep the strongman in a steady jog. You will quickly learn that this method can bring a lot of cash your way when playing the Idle Tap Strongman.

2. Upgrade The Weight Of The Object

Even though quick taps on the screen may be fun at first, they will bore you to hell sooner rather than later. For that reason, we want to tell you about some other methods for obtaining much more cash when playing Idle Tap Stongrman. Above all, the three power-ups at the bottom of the playing screen are worth looking into.

For instance, the first one on the left is an upgrade that deals with the weight of the object. As you know, people will pay more when they see the dummy performing something spectacular. So, the more robust the object – the more money will go your way. All the fans that are scattered along the road will throw dollar bills at the strongman if the object is massive and eye-catching. While playing this game, you will see the strongman working hard to drag all sorts of items.

3. Upgrade The Speed Of The Dummy

In most cases, regular taps on the center of the screen will keep the dummy running at a decent pace. And, as he goes forward, the fans will shower the strongman with wads of cash. But, what if you could improve the speed even more? Well, there is a simple and straightforward way to do so. 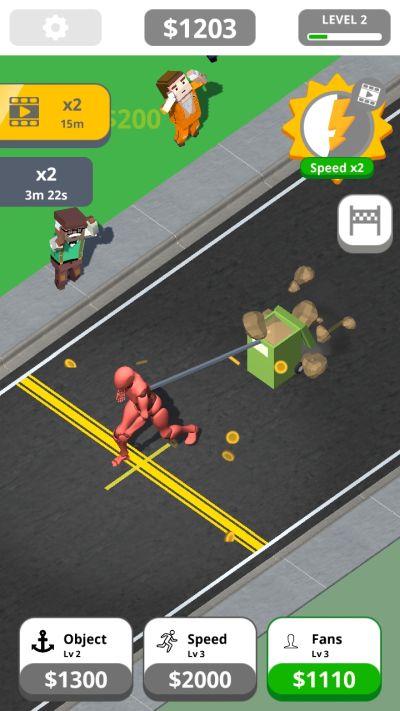 On the bottom of the screen, you will notice the icon for Speed. As the name implies, this particular power-up affects the speed of the dummy. In other words, if you level up this feature – the strongman will be faster and faster. Moreover, this could reduce the need for manual taps in the first place. Yet, the upgrades do not come free of charge. As you level them up, the cost of the power-ups will raise as well. Even so, we suggest that you splash the cash as soon as you see the middle icon at the bottom of the screen turn green. If the button is green, you can buy the upgrade and enjoy the benefits.

4. Boost The Number Of Fans

We already said that fans are the ones who reward your efforts in the Idle Tap Strongman. To clarify, the fans in this game are scattered by the side of the road. As the dummy drags the burden, the crowd will throw money at the strongman. In a way, the role of the fans is to encourage the dummy to put a bit more effort into the process. 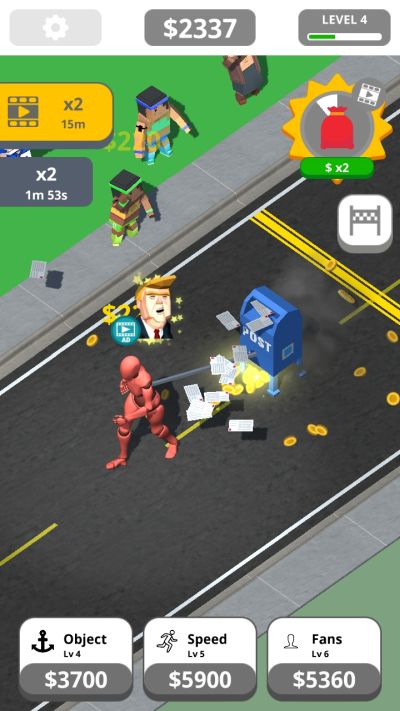 At the early stages of the game, the fans will appear every once and a while. Later on, they will stand in bigger groups, providing you with more money. So, it is imperative that you increase the number of fans as soon as possible. Luckily, Idle Tap Strongman offers an easy way to do so. In the bottom right corner, you will notice the icon to upgrade the number of fans. In other words, this power-up will enhance the frequency with which you collect the cash. Thus, invest in this upgrade at every opportunity and boost the number of fans that are watching the show.

5. Use The Double Speed Booster For Even Better Results

On top of all these power-ups, Idle Tap Strongman offers a couple more incentives as well. In a way, all these upgrades and buffs are there to help you earn more cash. As we already explained, some of them can provide you with better-paying objects while others can bring more fans to the side of the road. However, the speed of your avatar is the primary factor when it comes to collecting cash. In simple terms, the more ground the dummy covers – the more money will pour into the bankroll. 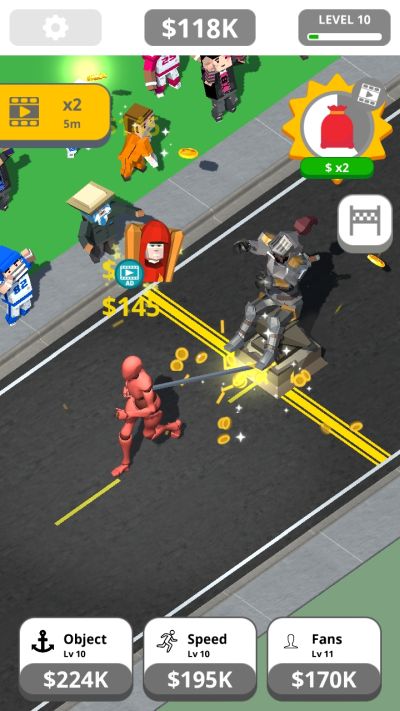 For that reason, we recommend that players always click on the Double Speed booster in the upper left corner. Unlike the power-ups at the bottom of the screen, this particular booster will require that you watch an ad. So, invest those 20 seconds and unlock super crazy speed. With the help of this upgrade, the dummy will sprint along the track like it drags no burden at all. Also, the flying bonus feature is something you should never miss. In other words, make sure to tap the balloon every time it flies across the screen. As a result, a lot of cash will go your way.

6. Always Level Up The Dummy

By now, you should have grasped the basic idea of the game. In a nutshell, Idle Tap Strongman is all about earning the money and then investing it into the power-ups that will bring you even more cash. So, earn and invest, earn and invest. Rinse and repeat. But, besides the above-mentioned upgrades, you will need to level up your character as well.

By leveling up, the dummy will become a formidable and mighty character. In short, heavier objects and faster speed will result in more income. On top of that, every time you level up – a generous reward will go your way. To be precise, you will be presented with a cash prize. Moreover, you can triple the prize money if you decide to watch a promotional video. Since the ad will take about 20 seconds of your day, make sure to double up the rewards every single time. By doing so, you will receive a valuable cash injection. Of course, you can then spend the money on buying the upgrades.

7. Use The Double Level Booster

As you see, XP points are also highly valuable when it comes to the gameplay of Idle Tap Strongman. The bar at the upper right corner will indicate when its time to level up the dummy. Thus, always keep an eye on this segment. You will gain XP points every time you tap the screen, so keep that in mind as well. 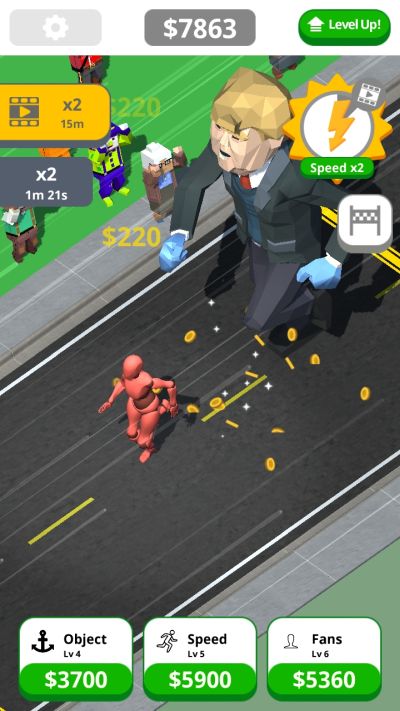 Yet, the game offers an even faster method of leveling up your avatar. Once again, all you need to do is watch an ad. But, before that, you will need to click on the Double Level booster that appears in the upper right area of the screen. Also, please note that this particular power-up stays visible for a couple of seconds. So, if you miss the opportunity, you will have to wait a while for the booster to appear again. To sum up, make sure to ‘catch’ and exploit this particular power-up. As a result, you will level up the dummy and receive a massive cash prize.

The dummy that drags the load in the Idle Tap Strongman seems to have Herculean strength. After all, the guy does not take a rest, even when you close the game. In fact, the moneymaking process in Idle Tap Strongman continues while you are away. As a result, you can come back to the game and collect a massive prize.

Of course, it is imperative that you raise the level of the power-ups as much as possible. The three upgrades at the bottom of the screen are the ones that affect offline play the most. So, invest the cash and level up those buffs at every opportunity. Also, we recommend that you triple the offline earnings every time you go back to the game. To clarify, Idle Tap Strongman offers to triple the prize if you watch a promo video. Since this seems like a fair deal, grab the opportunity and earn a lot of cash in a simple and effective way.

With the final tip on our list, we conclude this Idle Tap Strongman guide. If you are familiar with any other tips, cheats or strategies for the game, please let us know in the comments below!

Found this to get real boring real fast. Suffered major lag as the levels increased.