Kakao Games is well-regarded in the mobile gaming community for a long time thanks to the many games they’ve brought to iOS and Android devices. Black Desert Online, PUBG, and even BanG Dream! were just among the many games they’ve published to the Western market. That’s why it’s no surprise that Guardian Tales is also a great game. Having brought to it their experience in handling various multiplayer games, Guardian Tales feels like a well-polished and fully-realized Massively Multiplayer Online Role-Playing Game (MMORPG).

With that being said, fans of Kakao Games’ previous works may not immediately feel at home with Guardian Tales. Apart from the stark contrast in the visuals, it also brings a wholly different experience compared to their other games. While both Guardian Tales and Black Desert Online belong to the same genre, their gameplay can’t get any further from each other. As Black Desert Online mostly sticks to the basic MMO structure, Guardian Tales is more experimental – letting you control a whole party of four characters (three in PvP) at the same time instead of just one.

Unlike most MMORPGs, Guardian Tales also has a Gacha element tied into it. While most MMOs will have you create a new character at the start and have you stick with it, characters in Guardian Tales are pre-determined. You obtain them through a loot box system that is very familiar to mobile gamers. Therefore, apart from being an MMO, there’s also some dash of hero-collector in this game. That may prove to be a hindrance for some, but Guardian Tales’ gameplay is too good to simply ignore.

With that being said, it’s time for us to tell you how to play this game. While it may seem simple at first – no thanks to its very cute chibi graphics – the game hides a lot of hidden features that you can use to get ahead of others. We have come up with a Guardian Tales beginner’s guide to help new players find their footing in the game, and also help them prepare for a whole slew of content that will help them become stronger later on.

So, without further ado, get your sword and shield and put on your best armor. Let’s start your tale as a guardian.

1. Starting Off Your Adventure With The Right Foot Forward

Guardian Tales is a very colorful, 2.5D, pseudo-roguelike game that offers a rather straightforward but funny and entertaining story. While the game’s single-player mode is mostly linear and unchallenging, there are still branching paths that you can take, ranging from short detours to long sprawling series of optional levels.

The game may look like everything is single-player based but behind the streamlined story is the competitive part, which puts your three-man party against other people playing Guardian Tales in the game’s PvP Arena. 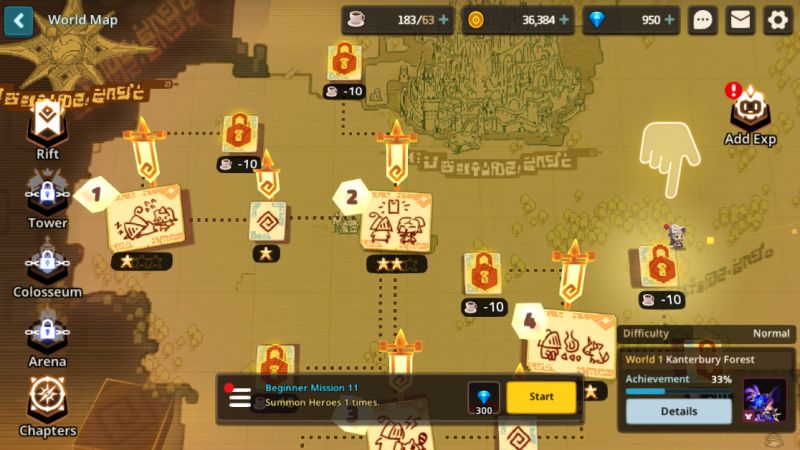 The Overworld Map – the coffee cups represent your energy, while the stars show your relative performance for each stage.

But first, before we venture forth, we shall find the optimal time to re-roll and the best way to progress through the story. There isn’t really too much difficulty in the single-player aspect of the game but there are stages that just aren’t worth investing your time into, so we’ll also make sure to avoid those.

The game starts off introducing some of our main characters, including you, a knight, almost done with his training. Everything suddenly went awry and your castle is subsequently besieged by demons from another dimension. You are thrown into the storyline as a knight who is trying to save a little princess from villainous monsters and other people who are either holding her hostage for ransom or as a potential ritualistic sacrifice.

The overworld is laid out in the style of classic platformers like Super Mario World. Through the overworld, you can traverse through different stages and levels. Each stage can have one up to a few number of exits, with the main one leading to the next stage in the main story, while others lead to secret stages strewn along the overworld. The game also has an energy system that is represented by coffee cups and each stage that you decide to play requires a certain amount of energy. Your performance in each stage is represented by the number of stars under the stage’s icon.

Once you’ve chosen a stage to play, you get transported into it. The interface here is simple and easy to understand. The stage map, which is initially dark due to the stage being unexplored, is located on the upper left side of the screen. The bullseye on the map indicates your main objective for the stage.

The optional collectibles have a completion counter on the upper right corner of the screen. These collectibles are not necessary to progress, although they help in making future stages easier. Don’t worry if you won’t be able to complete these stages and acquire all collectibles on your first go – some collectibles or paths are really not accessible at the start. 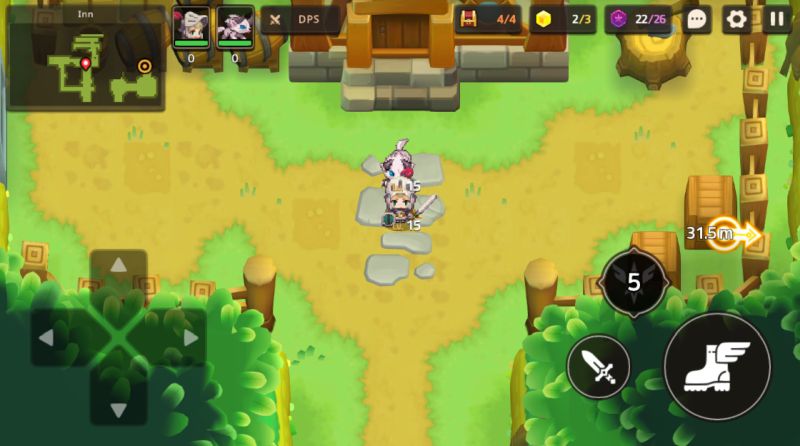 Your party of up to four characters are at the center of the screen, while various information are at the corners.

An arrow will lead you to where you need to go to finish the stage and progress to the next. While you can go directly to the exit, using the buttons to your lower right to attack, dodge, and use skills, it’s recommended to also explore the stage in search of hidden paths and collectibles.

Related: Guardian Tales Tier List: Our Picks for the Best Heroes in the Game

Fighting enemies won’t be too difficult as long as you take your time learning their moves. Enemies telegraph their attacks, and zones will be highlighted in red. Staying out of the red zones will get you out of harm’s way, but sometimes you need to have quick reflexes to dodge at the right moment.

2. The Cast Of Characters, My Shiny Arsenal, And Re-Rolling For The Best Party And Equipment

Guardian Tales feature different unlockable characters, each with their own playstyle, strengths and weaknesses. Using them in stages don’t level them up. Instead, you collect experience crystals, which you then use to strengthen your characters. These experience crystals can be acquired from going through the stages – meaning that you can level up those characters even if you don’t use them. 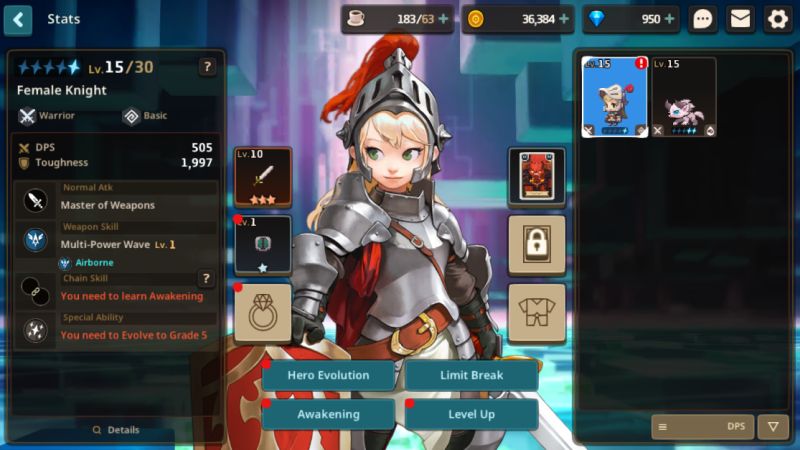 From zero to hero – customization and strengthening.

This also lets you instantly level up a high-tier character you just got from drops. Boost them to the same level of your main party without having to grind from level one. There are plenty of other things to consider in making your characters stronger such as awakening and class evolution, requiring different materials that are farmable after their dungeon instances are unlocked.
Now that we’ve sorted out the basics, let’s jump right into the short-term goals that you need to accomplish if you want to play competitively.

First on our list is clearing out the main stages up to stage 1-4. This will unlock the ability to draw for heroes and weapons. This will also unlock the Rift Dungeon, which we’ll discuss in detail a little later on. You need to finish the rift dungeons repetitively until you amass a total of 2700 gems which you will use to draw for heroes and weapons. 2700 gems are just enough to draw 10x for weapons, which gives you more rare drops than a single draw would.

Here comes the tedious part: our goal for doing all of these is to get Exclusive Weapons: elusive and powerful 5-star weapons your characters can equip. These weapons are a must-have in order for you to stand a chance against other players in the PvP arena. It would be tolerable to settle for 3-star weapons, but they are far from a match for those high-end exclusive weapons.

If you happen to be unlucky and not get any of those 5-star weapons, it’s time to re-roll: resetting your game and redoing the intro parts until you finish stage 1-4 again. If you’re not up for this, it’s fine. The single-player story mode is still more than worth it to finish. You can get more chances of getting 5-star weapons later on, but you just won’t be able to play competitively at the start.

Once you’ve progressed enough in the main story, it is in the Rift Dungeon that you will spend most of your time. This is the place where you will be getting most of your evolution and awakening materials. This will also be the place where you will be getting your gems in the early game – mostly as a first clear reward for the dungeons. To summarize, the dungeons are as follows:

Resource Dungeon is good for farming gold and experience crystals. However, early on in the game, you actually get a lot more gold and crystals from clearing the main story stages. Just clear them once for the first clear bonus, and go after the other dungeons instead. 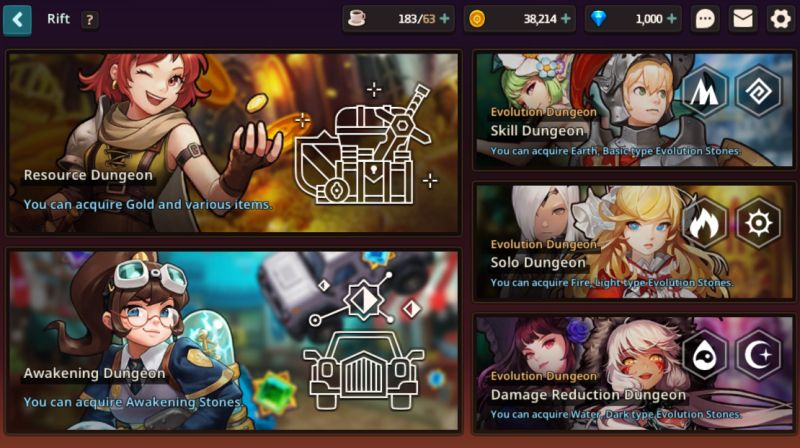 Welcome to the farm. Enjoy the grind.

Awakening Dungeon gives you – as the name suggests – awakening materials. Using these materials, you get to unlock awakening nodes for your characters. These nodes are classified into 4 types:

Attack, Defense, HP, and Special. These dungeons are considered to be the bottle-neck due to the instances and farmable stones being calendar-based events. Dreamstones, which you also need to unlock Special nodes, are the hardest to farm because they’re only available once a week.

Evolution Dungeons is the place to get hero shards so that you can go through hero evolution. Each evolution dungeon type has its own gimmick – Earth & Fire needs you to use skills in order to deal damage to the enemies that you face; Fire & Light needs you to only use one hero in order to clear or even enter the stage; and lastly Water & Dark needs you to deal a certain amount of damage to an enemy for it to be considered as a damage tick. A hero goes through 4 total evolutions and each consecutive evolution requires more shards than the last.

The game is mostly straightforward, with a hack-and-slash & rogue-like gameplay. But that doesn’t mean that there aren’t areas for optimization and mistakes that we need to avoid. Here’s a general list of things to avoid when you’re playing Guardian Tales:

Avoid spending your gems on pulling heroes, especially if you are still in the early game. Most of the heroes that are found within the draws can be obtained for free just by running through the whole story. Pulling heroes will only be a viable sink for your gems if ever you need duplicates to limit break (increasing their level cap) the heroes that you already have. 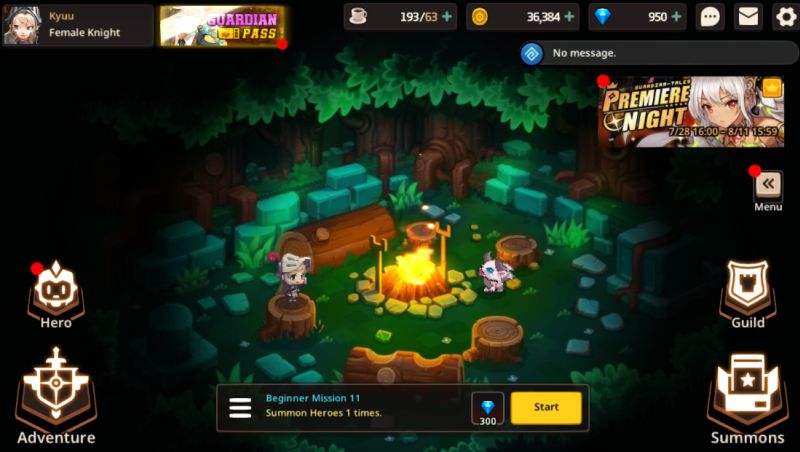 Rest easy and prepare for the next stage.

Your team composition should revolve around the character-exclusive weapons that you happen to get from draws. These exclusive weapons will be your key to surviving the competition in this game. These will also help you breeze through the story mode.

Do not sell low-star equipment that you get from draws. Guardian Tales has this feature called Random Evolution. This feature allows you to use weapons of the same rarity and combine them for a chance to get either a higher rarity weapon or same rarity weapon. This is another way to get 5-star exclusive weapons.

Guardian Tales definitely has a lot in store for both beginners and MMORPG veterans alike. What makes Guardian Tales stand out is its very fun and exciting story, filled with light-hearted scenes but with a hint of edginess. If you like the humor of games like Disgaea or love cute chibi aesthetics, you’ll feel right at home here. At its core, it’s a very well-made game with smooth controls and fun mechanics. It’s wrapped by the developers with a load of extra content, and supported by a well-meaning and friendly community. If you want a new game to sink your teeth into, consider giving Guardian Tales a try. You won’t regret it.