Godzilla Defense Force is an idle clicker game developed by Nexon, the masterminds behind titles such as Durango: Wild Lands and LYN: The Lightbringer. The objective of the game is to collect resources through tapping or idling, and progressively building up your structures to make your defense more powerful, which will allow you to defeat stronger enemies, which in turn will give you more rewards, and so on. Moreover, Godzilla Defense Force features a card system to help you make your base even more powerful.

As an idle game, it goes on even if you are not actively playing it. So without further ado, let’s dive into our Godzilla Defense Force beginner’s guide for tips, cheats and strategies how to build up your base and save the world from the Kaijus.

As it goes with every idle game out there, keeping your buildings upgraded is the best way to proceed in timely fashion throughout the levels. When your buildings reach a specific level, they will receive a substantial upgrade, this happens at level 25, 50, 100, 150, and then once every 50 levels. 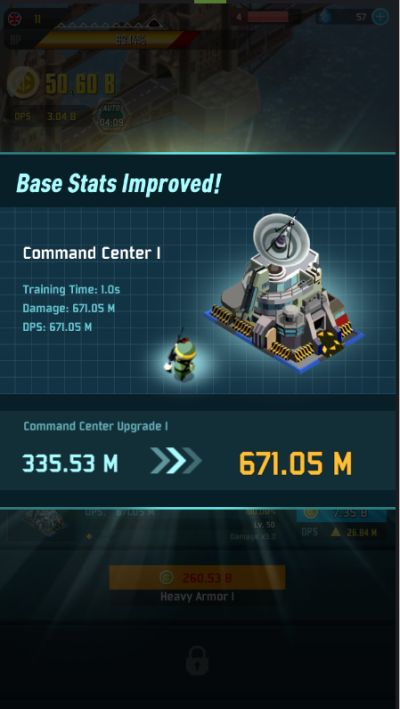 Each one of these adds to the multiplier of the DPS increase you get by leveling them up, so always aim to get one of these upgrades before fighting the Kaijus. Bear in mind though that before getting a real return on investment from upgrading the lower tier buildings, you should aim to build the higher tier structures first, as the DPS they provide is much higher until the damage multiplier’s bonuses start piling up for your lesser buildings. You only have 30 seconds to defeat a Kaiju, and 50 to defeat Godzilla, so you will need your DPS to be as high as possible in order to proceed clearing levels.

Also, remember that whenever you enter a new city you restart from scratch; however, the lower level buildings will be much better than the ones in previous levels. This means that unlocking new cities, which you do by defeating Kaijus to raise your Headquarters’ level, is the best way to proceed, as you will get plenty of gold that will allow you to unlock additional buildings in the previous cities, which will allow you to defeat more Kaijus, which will in turn let you unlock more cities to play in, and so on.

In Godzilla Defense Force you will have to face a Kaiju every 10 levels. Kaijus are huge mutated monsters that want to crush your base. Kaiju fights will largely depend from your DPS, but there are some tricks you can employ to increase your chances of clearing them that don’t include breaking your finger or your phone’s screen. First off, make sure to check your cards before going into a fight. When you are progressing smoothly through the game, it is likely you won’t pay much attention to your cards, so checking them before a hard fight will ensure you actually bring the ones that will allow you to emerge victorious.

Don’t worry, you can change your cards even after you get defeated by a Kaiju, just make sure to keep your deck updated. Kaijus also have the annoying habit or attempting to destroy your buildings. When that happens, you will see an icon of an exclamation mark flashing on top of your burning building, you will have to tap it repeatedly to avoid your building becoming completely unusable for a couple seconds, which could spell doom for Tokyo. Sometimes the Kaijus reveal their weak spot, which will be notified to you by a big flashing circle on the area in which you must tap to deal extra damage to the boss. 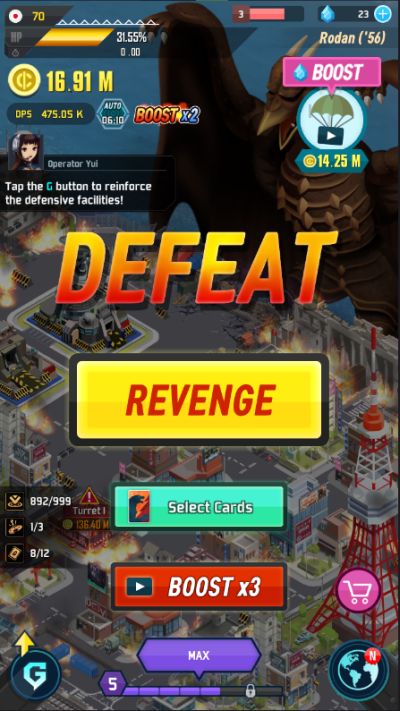 If all of this is not sufficient and you are finding yourself getting annihilated by the oversized mutants, the defeat screen has some places of interest to help you out. On the top right of the screen, you can tap on the parachute icon (called the Supply Relief) to watch an ad and earn a lot of money. You can spend some X-nium to 10x the reward you get from watching the ad too, very handy if you want the extra money to build that extra building that will turn the tides of the battle. The Boost x3 button also involves watching an ad to get an extra boost for the revenge fight, you can get up to 3 boosts, but you can only get 1 boost per defeat.

Cards add depth to Godzilla Defense Force, and give you additional bonuses when you play them. They could improve the overall attack of the units you deploy, or they could deal a flat amount of damage to the Kaju you are using them on based on your city’s total DPS. Some other improve your chance of scoring a Critical Hit, while others grant you additional damage when you score a Critical Hit. You get a free pack that contains 3 cards every 6 hours, alternatively you can purchase packs with X-nium, the premium currency of the game, which you can either buy from the shop, or you can farm it by tapping on the UFOs that appear randomly during the game. You can also earn X-nium by earning trophies, which are special achievements you can check out in the trophies screen from the World Map. Each card has its own level, and in order to level up a card, you will need additional copies of it, or alternatively, you can use the “grind” function on cards you do not care about, which will earn you Card Powder. You can then use the powder to craft additional copies of the cards you need. 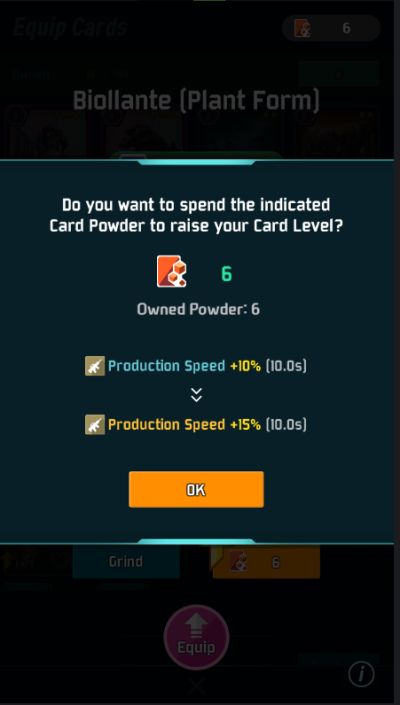 You need 2 copies to level up a card from level 1 to level 2, 3 copies to get the cards up to level 3, and so on. Leveling up a card increases the bonuses you get from playing it. Make sure to always play your cards when you are in a difficult fight. Each Card has a playing cost, that you can check in the Cards section. Naturally, the more powerful the card, the more expensive it is, so you will have cards like Godzilla’66 with a whopping cost of 4! The amount of points you have at your disposal recharges over time, but you can recharge it quickly by spending X-nium in the “Defeat” screen, should you feel the need to play more cards again to defeat the Kaiju that just destroyed your city.

4. How To Challenge Godzilla

The Godzilla cards are hands down the best cards in the game, and in order to get it, you will have to challenge and defeat… 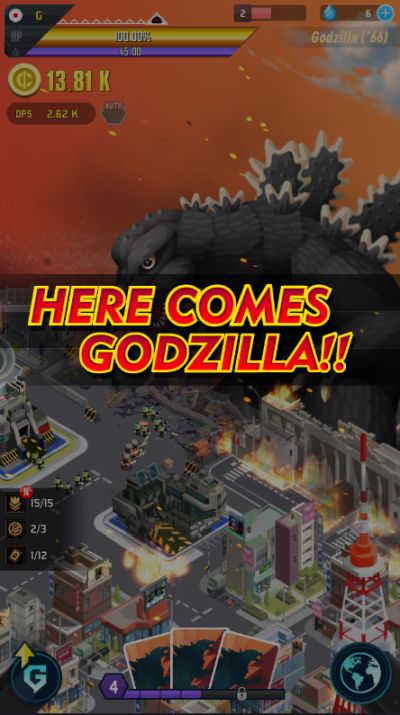 Godzilla is a special boss that appears during regular gameplay, and it is the monster we have all learned to love in all the movies made about it. There are various versions of Godzilla, such as Godzilla’66, Godzilla’99, and others from the various movies about it. In order to challenge it, you will have to wait until the big CHALLENGE button appears next to your DPS icon, tap on it, and then the battle against Godzilla will begin. Godzilla is an exceptionally sturdy Kaiju, and defeating it might require some extra effort and boosts, and a couple defeats, but it is all worth it, as the card you get as a reward is insanely powerful and will help you so much when dealing with the various Kaijus you will face during the game.

One more thing to note, is that when you get the challenge to face Godzilla, you will be stuck at the same level fighting the small monsters until you accept the challenge. This means that you can simply wait on that level until you earn enough coins to upgrade everything and defeat Godzilla. Defeating Godzilla will earn you its card (or Card Powder if you already own the card), every era has its own Godzilla card, for example, Godzilla’66 deals 15x damage of your base’s current DPS to the Kaiju you are using it on, while Godzilla’99 doubles your production speed for 20 seconds.

5. Resetting Your Progress Is Sometimes The Best Way To Proceed

If you really can’t get past a Kaiju, considering using the Time Travel function, which you unlock by reaching level 5. What does this mean? You will restart from scratch, resetting your Coins, City, and HQ level. You will hold onto your Cards, Artifacts, and X-nium. You will get Time Shards by using Time Travel, which you can then spend to unlock powerful Artifacts that grant you additional bonuses, for example higher Attack, or Production Speed. The number of Time Shards you get is based on your current progress, so hold onto time traveling until you have completely exhausted every other option. Yes, restarting from almost 0 can be a little annoying, but trust me, after 3-4 time travels, you will be grateful, as you will progress so quickly that you won’t even pay attention to it. 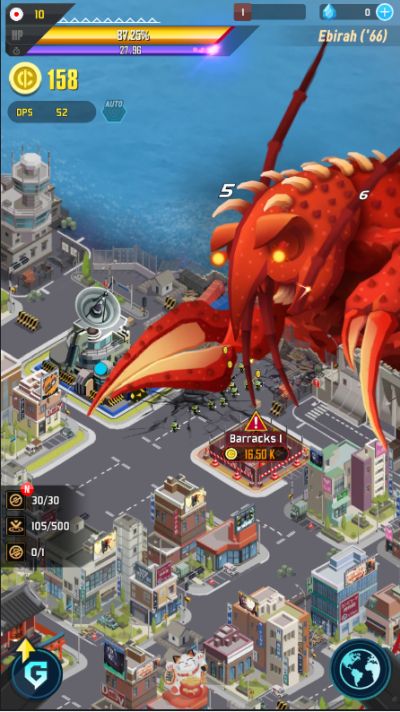 Another benefit of time traveling is that you will fight all the Kaijus you have already faced, you will not get their card though, but instead you will get additional Card Powder, the currency you get by grinding your cards. So time traveling not only will give you flat bonuses because of the artifacts, but it will also help you level up your Cards, making progressing through the game a breeze, compared to your first playthrough! The more time you time travel, the faster you will reach the point you were left at, except this time it will be much easier to get past it, thanks to all the boosts you have been accumulating.

6. Collect All The Freebies

The game gives out a lot of things for free. Well, not really for free, but realistically, you won’t have to spend real money on any currency, provided you are ok with waiting some time. If you want to accelerate your progress through the stages, prepare to watch a lot of video ads. And I mean A LOT. You will have to watch ads to collect Relief Support, to get boosts when you can’t defeat Kaijus in time, to double the “Idle income” you get when you visit a city you haven’t played in in a while…you will find yourself watching so many ads, it can get a little frustrating at times.

Other than that, you get a set of 3 quests that are available at all times, these range from tapping on the screen a certain number of times, to using your cards, saving civilians, upgrading your buildings, and other aspects of the game. These are related to the city you are in, so make sure to complete as many as you can in every city, this will give you a considerable boost in gold. You can also unlock an “Auto Clicker”, a feature of the game that automatically gives you 8 clicks per second for a certain period of time, it is very handy, but as you might have guessed, you will have to watch an ad to get it, or to spend X-nium for a more powerful version of the free auto-clicker.

This wraps up our beginner’s guide for Godzilla Defense Force. The quality of the game is very high, so if you like idle-clicker games, make sure to check it out. Fighting all the iconic monsters from the Godzilla franchise gave us goosebumps, the nostalgia is real! Anyway, the game is very fun, and it’s perfect if you simply need to unwind for a couple minutes to distract yourself. As always, if you have found any other tips or tricks to the game, make sure to share them with us in the comment section!