In case you are a fan of highly entertaining puzzle games, Fastone Games have prepared a real treat, and you will spend hours playing the latest edition of Find Differences. This time, the game is called Her Secret, which pretty much implies what you will be doing – after examining the clues and hints, your job will be to uncover a potential affair and determine whether your girlfriend is faithful or not.

As much as 16 different story scenarios are available in the game, and the players will need to use a lot of ingenuity and tactical thinking to solve the mysteries. That is why our Find Differences: Her Secret guide can be of great assistance to anyone willing to scan through more than a hundred colorful pictures and decipher all their discrepancies. So without further ado, let’s move on to our Find Differences: Her Secret tips, cheats and strategies!

1. Pay Attention To The Storyline

The gameplay of Find Differences: Her Secret is pretty straightforward: your screen will show two almost identical pictures, but there will be 3-5 subtle variations between the photos. By pinpointing the deviations, you will earn gold stars. Once you collect enough stars, i.e. you locate all of the ‘issues’, you will complete the task and this will allow you to progress to the next level. 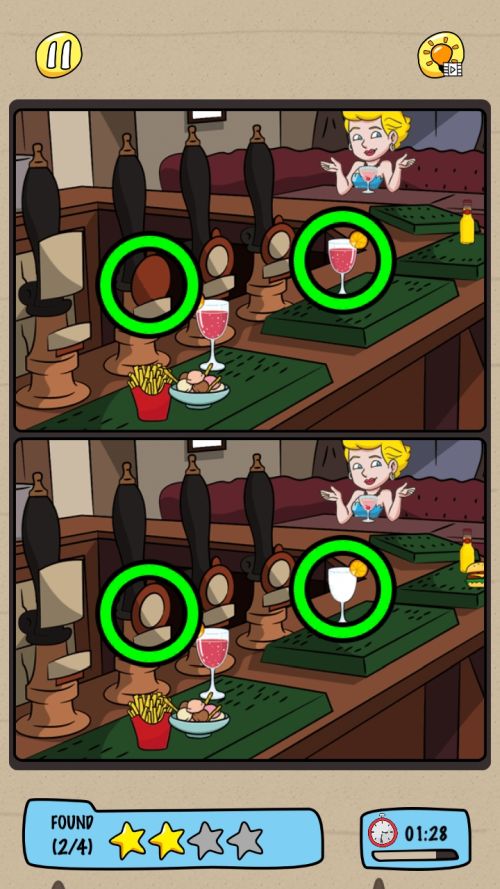 In order to complete the missions within the required period (90 seconds per task), we advise the players to follow the storyline as much as possible. The gameplay will often show unobtrusive details which tell more about the overall topic of Find Differences: Her Secret. As we already said, suspicious actions of your girlfriend are under investigation here, and the knowledge about the characters and their background will help the players focus more on the relevant and more important details in the pictures.

Having a good and efficient system is important in all areas of human activity, and mobile games are no exception. In other words, Find Differences: Her Secret will turn into a highly enjoyable game if you use a proper system for locating the deviations on the two opposing photos. Due to the fact that the pictures in this game are highly detailed and they come in full color, it can sometimes be a bit tricky to find the subtle differences within the given timeframe.

That is why we advise the players to use a system of strategic scanning. What this means is that they should divide the pictures into several sectors, which will focus their attention on a specific area. After that, the players should explore and investigate the sector in question in full detail. If no issues are located within a given sector – the players quickly move on and repeat the process until all the differences are found.

As you progress through the game, Find Differences: Her Secret will become more and more challenging. The pictures will become more detailed, you will need to find more differences, and so on. Unfortunately, the number of available lives remains the same, i.e. the players only have five lives at their disposal, and this fact could lead to frustration and unwanted timeouts.

Luckily, there is a solution to this ‘problem’, and you only need to press the light bulb in the top right corner when playing the game. The lightbulb is the well-known symbol for „Eureka!“, and you will often find yourself shouting this same Greek word after the magnifying lens shows you the location of the differences between the pictures.

Hints are a great option to use when you are low on ideas and the time is running out. By tapping the light bulb, the game will offer a ‘free pass’ and you will see the area in which you need to look.

4. Zoom In On The Details

The graphics in Find Differences: Her Secret are bright and colorful, and they support highly detailed images. However, this is not necessarily a good thing from the player’s perspective since the abundance of details and objects on the picture can make it difficult to spot the difference and mark it appropriately. 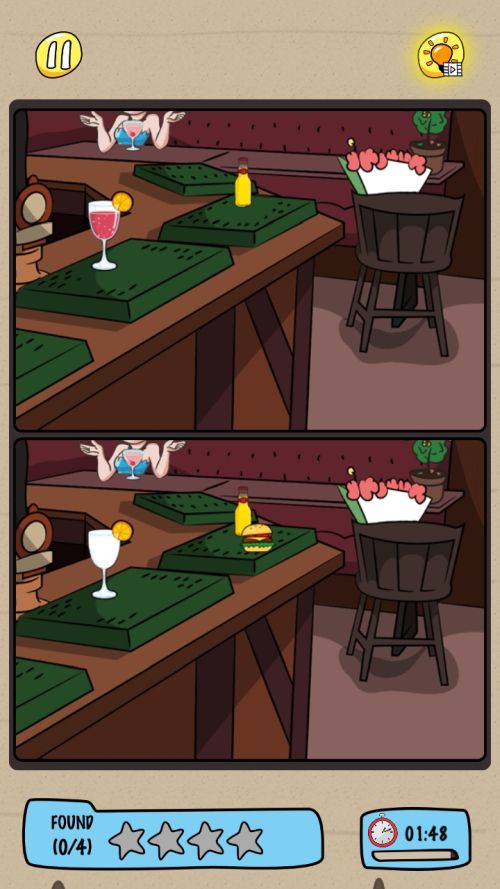 Fortunately, another useful tool which can make life easier is the ‘zoom’ option, and the players can easily zoom in one segment of a photo. By doing so, the objects on the image will appear in more detail, i.e. the players will have the chance to locate even the smallest of discrepancies.

The zoom works in a classical way, by pinching the photo with your fingers. Of course, once you have finished examining a certain section, you can just as easily ‘zoom out’, and this will show you the whole picture all over again.

5. Pay Attention To The Important Clues

At the beginning of this Find Differences: Her Secret guide, we mentioned the need to be astute and clever when playing this mobile game. The pictures and their differences require a sharp vision, but you also need to use your head when trying to investigate the alleged affair of your girlfriend. 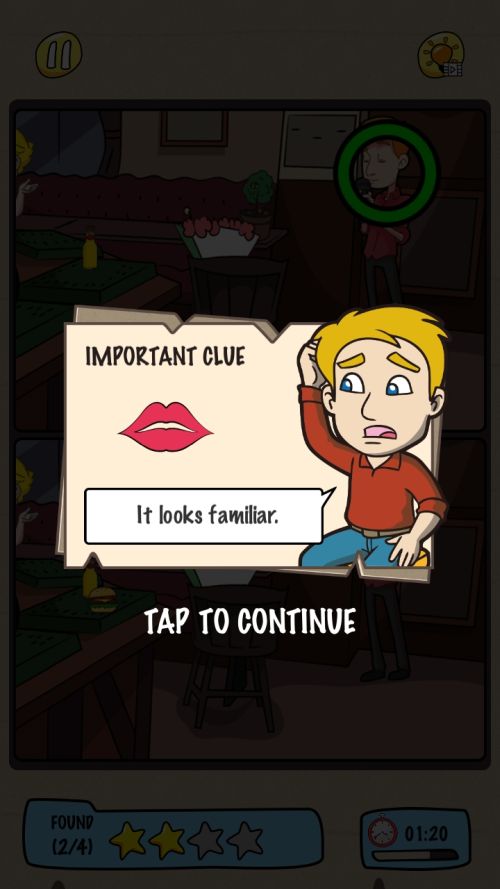 Every once and a while, the game will offer the so-called ‘Important clues’, and these hints will help in having a better understanding of the storyline. Admittedly, the clues will often raise additional questions, but the search for answers to those questions will take you to new levels in the game.

Because of this fact, we urge the players to pay attention to those ‘Important clues’ and to try and decipher their meaning as soon as possible. The names of the chapters in the game can also help you understand the plot, and some of those stories are named „Cheating Wife“, „Sudden Fitness Girlfriend“, „My Girlfriend Likes Taking Selfies“, and so on.

Every experienced gamer knows that, in order to progress to the next level, you usually have to beat the so-called boss. Since Find Differences: Her Secret is not your typical video game, some players could maybe hope that there are no boss characters and that progress to the higher levels is as easy as they come. However, this game would not be as interesting as it is if it wasn’t for a mini-game which presents a portal to the upper levels.

‘Who did it?’ is a mini-segment that shows a small clip related to the storyline of the game. Typically, an action has occurred at a given moment in time, and your job is to find the culprit. If you find the one who performed the act – you will be granted a free pass to the next level. If you miss and accuse the wrong person – you will have to play the mission from the start.

Luckily, this mini-game is pretty easy, and you only need to pay attention to the details on the hands or feet of the one who performed the act in question. Most of the perpetrators will wear a unique watch, or they could be dressed in a shirt of a specific and easily recognizable color.

7. Take Good Care Of Your Lives

With the help of various hints and clues, the players can easily progress through the initial stages of the game. However, some tasks will prove to be more challenging than others, and you will not be able to locate all the required differences in the pictures. The time will run out, and you will lose your life and the mission will reset, forcing you to start all over again. 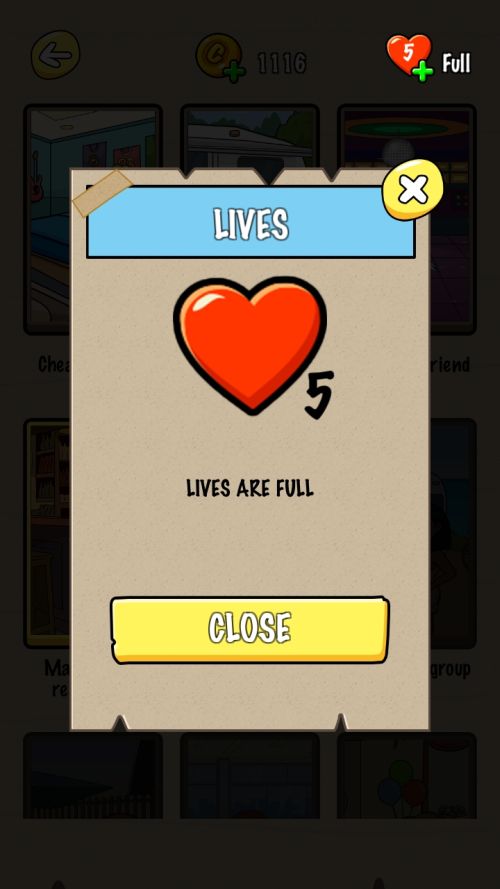 Fortunately, the players have five lives on their disposal when playing Find Differences: Her Secret, which means that you can make five unsuccessful attempts until you are forced to take a break and rest for a while. Once you deplete all five lives, they will start to regenerate, which is another useful and elegant component of the game.

Every life requires approximately 10 minutes to regenerate, and that is why we advise players to be careful with their attempts and not to waste their lives. Just like a cat has nine, you are given five of them so better make them count! The number of available lives is displayed in the upper right corner, and they are represented by the red hearts.

The exciting gameplay of Find Differences: Her Secret gets even more pumped up when the timer starts counting the final ten seconds of the game. During those moments, many players will start to panic and they could even make random attempts at the pictures, trying to locate the differences just by using blind luck.

We urge the players not to behave in such a way, simply because this will cause more bad than good. In other words, you will probably lose your lives without making any progress.

Instead, we advise the players to take a deep breath and use their logic and ingenuity, trying to forget about the time running out. By examining the images one more time, many of the players will experience the famous ‘Eureka’ moment, and they will be saved in the nick of time!