It’s a jungle war between you and the rest of the world in Critter Clash where you arm yourself with animals while going against other players real-time. Critter Clash is a turn-based tactical game from Lumi Studios with a dose of cuteness. It’s like the birthchild of Worms and Angry Birds, only instead of heavy artillery, you have an adorable array of animals that you hurl at your opponent.

In this tactical mobile game, you face another player real-time and use the animals that you have to take down animals of their own. Each player gets 10 seconds to decide what to do for every turn, which tests your thinking abilities and strategic planning. It also showcases cute characters and entertaining animations, which guarantees enjoyable gameplay for hours. Our compilation of Critter Clash tips, cheats and strategies will help you maximizing the fun while beating opponents easily and having the best animal team there is.

An important part of Critter Clash is the critters themselves. As of this writing, there are 61 animals you can collect and different ways of obtaining them. Others unlock as you level up and others need conditions before you can get them. Unlocking them doesn’t mean you’ll have them though. You’ll need to get them from treasure chests or purchase them in the shop. There are different kinds of animals you can unlock, and each one of them has a special ability that gives you an advantage when attacking the enemy. 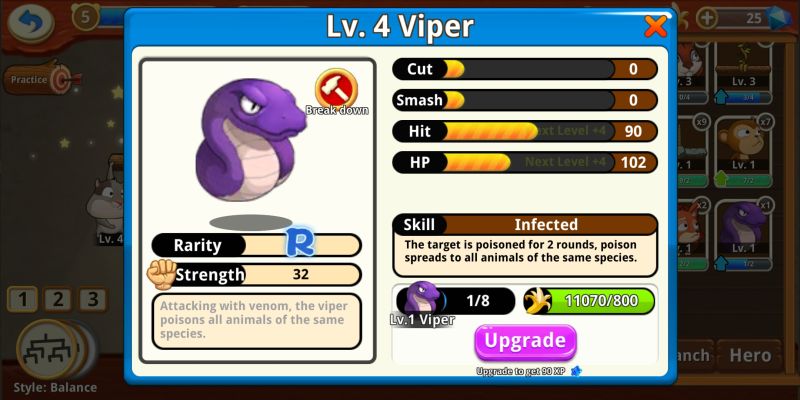 Different animals specialize in each of the different ways you can attack. For example, you have the cat who specializes in cutting ropes, the monkey who specializes in breaking branches, and the elephant can attack multiple animals at once. Other animals have other specialties as well. You can check this by tapping on the animal in the team menu from the home screen.

Focus on the animals you have. After checking each of their abilities, you can now think of a strategy to beat your opponent. A good one would be to aim for the topmost rope. If your animal who specializes in cutting ropes has high cut stats, you can win perfectly without having to attack your opponent’s animals. Knowing your animals’ skills and knowing when and how to use them effectively is key to winning a battle.

Now that you know the abilities of your animals, upgrading them is the next step. Upgrading your animals increases their stats and makes them stronger. To upgrade them, you’ll need to get the same animal from treasure chests or from the shop and bananas. With every upgrade you do, the animals and bananas you need will cost more. For example, if you want to upgrade the monkey, you will need another monkey and the bananas that go along with it.

Whenever you get an extra animal, always upgrade them if you can. Upgrade the animals that are on your team and not the ones on your collection. You can always upgrade other animals later if you’re going to use them. Remember that upgrading will raise your animals’ stats and therefore will give you a higher chance of taking down the enemy faster.

3. Select The Team Formation That Suits You

Another important aspect of Critter Clash is the formation of your team. This is how your animals are laid out and positioned in the game. There are three kinds of formation you can choose from: balance, triangle, and wave. You’ll start with the default formation which is balanced meaning ropes and branches are evenly placed on both sides of the main branch. The next formation is unlocked when you reach level 5 and is called triangle. With triangle, it’s a defensive formation with more branches at the back so you can protect more of your animals. The last formation is called wave and is unlocked when you reach level 8. With wave, it’s an offensive formation with all branches on one side. 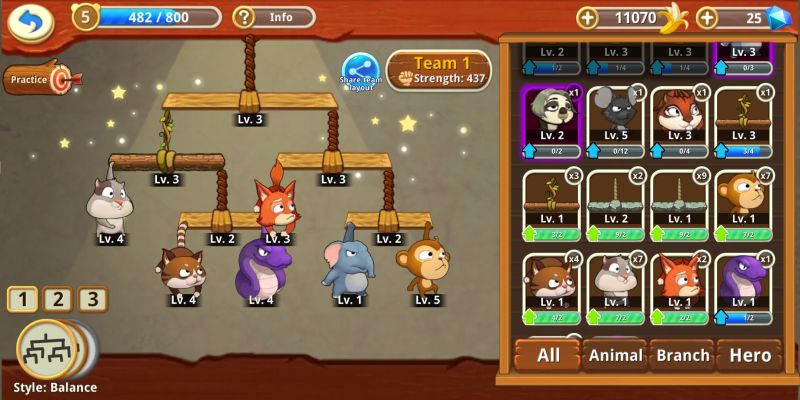 The strength of your team depends on the formation you choose, the strength of your branches and ropes, and how powerful your animals are. Just like animals, there are different types of branches as well and also with abilities of their own. Some branches have stronger rope that makes it harder for animals to cut it. Some branches have a sturdier branch but a weaker rope. You can also upgrade branches to make them stronger. Upgrading branches is the same as animals. You’ll need duplicates of a branch to upgrade it. Select the team menu on the home screen and then tap the branch you want to upgrade. You can also see the strength of the branch and its rope when you tap on it. You have to take all of this into mind when placing each branch in your formation.

Where you place your animals also matter. If you place animals higher in the formation, they’ll have additional HP. If you place them lower in the formation, they’ll have higher damage. You can put your best damage dealers at the lower branches and those with higher HP can be placed higher to serve as defense. However, the most important thing to remember about formations is that one branch at the top holds all branches beneath it. If this branch and its rope get destroyed, all your animals will drop and the game ends. Prioritize this top branch when upgrading. After the top branch, strengthen the front branches and ropes because these might also be first targets for attack.

Before facing real players and going on battles, you should make different teams and try out different formations. This way you’ll find out which one suits you best. Once you have your team formed, you can test them out first before heading to battle in practice mode. With practice mode, you can try your new formation and the skills of your animal as well. You can also test out your aiming skills and see if you can hit the right targets. To access practice mode, go to team menu, and tap on the practice button located on the upper left. You’ll then be taken to a mock battle against monkeys. You still take turns and you can still lose, but you can practice as much as you want.

In order to truly progress in this game, you will need to gather more resources so that you can upgrade and strengthen your team. By completing achievements and tasks, you’ll be rewarded with bananas, diamonds, or fire stone. Bananas are the regular game currency, diamonds are the premium currency, and fire stones are the rare currency. All of these are rewarded when you play battles. They’re also found in the shop, and you can either use diamonds or real money to buy them. 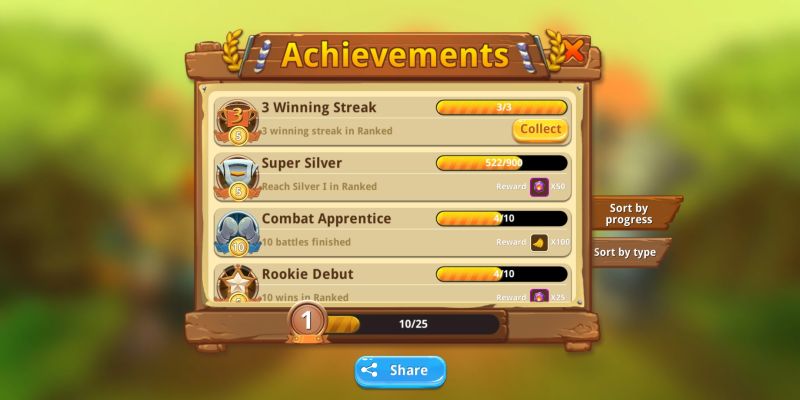 Doing achievements is an easy way to get you rewards. Depending on what you need to accomplish, you’ll be given bananas, diamonds, fire stones, or animals. To see the list of achievements you need to do, swipe left from the home screen and tap on the monkey statue that says achievements. You can sort the list by progress or by type. This way you can choose which ones you are nearly completing and focus on that first, or you can see which reward you’d like to get and chose to do that first to get the reward you want.

Tasks on the other hand are like mini quests you need to do to get rewards. There are three tasks shown at the same time. Once you’ve completed one, it will take hours before another one becomes available, so make sure to check if there’s a new task in order to get rewards. To see which tasks are available, you can swipe left from the home screen and tap on the task menu.

After each battle with a real player, you’ll be given a chest which has a lot of items in it. Winning player versus player matches or ranked games consecutively and maintaining it gives you a better treasure chest. However, you can only hold four treasure chests at a time which can be seen at the home screen. If your chest slots are full and a better chest comes along, you can watch an ad to replace an existing chest with a better one.

There are different kinds of chests you can open in the game. Depending on what type they are, you’ll get really great and rare items. Common chests give you common animals or branches and bananas as well. Rare chests take a bit longer to open, and there’s a chance you might get rare stuff as well. There are also chests that can be purchased in the shop using fire stones and diamonds: the super chest and the legendary chest. Having these chests gives you a chance to obtain super rare and legendary animals and branches. There’s also the referral chest which is given to you if you refer the game to a friend.

This is where you should spend your fire stones and diamonds. Saving them up takes time and effort, but it will all be worth it when you get amazing rewards in the end. It’s ideal to go for the chest packs rather than a single one because packs are discounted and you’ll be able to save.

As with all free-to-play mobile games, watching ads give you an advantage in Critter Clash. There are several ways to do this. In the home screen you’ll see a gift box just above the shop. Select it and a window will pop up giving you the option to watch an ad and showing what reward comes with it. An exclamation mark on the gift tells you if there’s an ad available to watch. 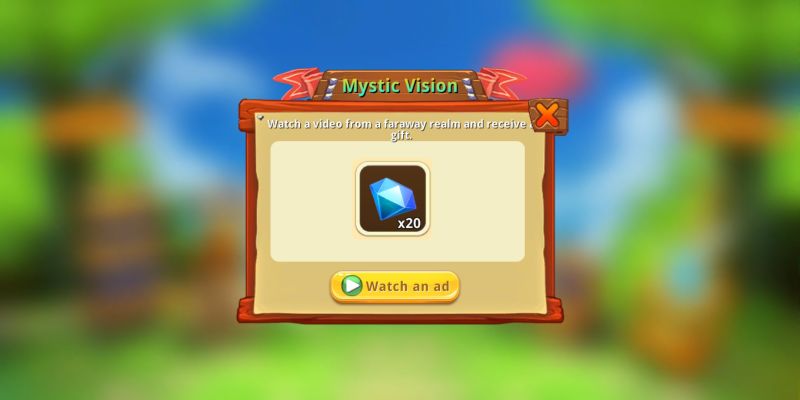 Daily deals can be seen in the shop. It showcases animals and branches that you can buy in bananas. It can be anything that you can use to upgrade your current team, or even new animals or branches you don’t have. It’s worth checking out because there might be something there you need to upgrade. The deals refresh every few hours and new offers come up. The higher your level, the more daily deal slots you have. To take advantage of this, try to level up your character up to level 20 to have six slots for deals. This allows more items to be available for purchase. Bananas come by easily and if you save enough, you can even buy everything. If you see a strong animal or anything you need to upgrade, make sure to purchase that item immediately.

We’re at the end of our Critter Clash beginner’s guide. Make sure to follow these tips to be the best clasher out there. If you know more cool tips or tricks for this game, please feel free to share them with us in the comment section below.