American Dad! Apocalypse Soon is all about managing your resources in the best possible way to progress as much as possible. The game is a bit confusing at first, but don’t worry, we got you covered. Be sure to check out our beginner’s guide if you are just starting out in the game. This guide is for you if you are already in a place where you feel comfortable with the basic game mechanics, and want to know how to explode your resources income, draft the best Rogers into your army, and progress as quickly as possible through the various stages of the game.

1. An In-Depth Explanation Of Rogers Classes

We already talked about Rogers Classes in the American Dad! Apocalypse Soon beginner’s guide, but we didn’t go in depth about it. There are six classes in the game: Fighter, Cook, Banker, Carpenter, Charger, and Radiochemist. The Fighter class indicates how powerful the Roger is in combat, and it can be trained in the Fighter Training Room.

The other classes influence how good the respective Roger is at generating each resource. Bankers excel at making money in the Mint, Cooks are great at cooking food in the kitchen and so on.
To check what each Roger excels at, simply tap on them, and you will see them in the left column of the screen.

You can make your Rogers better at each craft by building the respective training room and training your Rogers. So for example you can build a Banker Training Room and place the Rogers you intend to use to run your Mint there, and get up their Banker level. It is important to invest in your Rogers, as your investment will be repaid tenfold. Get your lower-class Rogers (those you don’t plan to bring into fight or to clone into more Rogers) in the training rooms, and see how much your production boons once you have trained them.

It is absolutely worth it to expend all these resources to train your Rogers in the mansions you plan to use them for, so go for it as soon as possible. Prioritize Bankers when you are just starting out, as money will be the scarcest resource then, unlike food, of which you receive plenty from the game and it will be more than enough until you start attending the tournaments in the Morning Mimosa.

2. Enter Tournaments In The Mimosa Garden

You can enter tournaments for a chance to win a grand prize in the Mimosa Garden. You can join a tournament upon spending either a Tournament Ticket or Food. What you use to enter determines the Grand Prize of the tournament, should you reach the #1 spot, so consider carefully what to use to join. 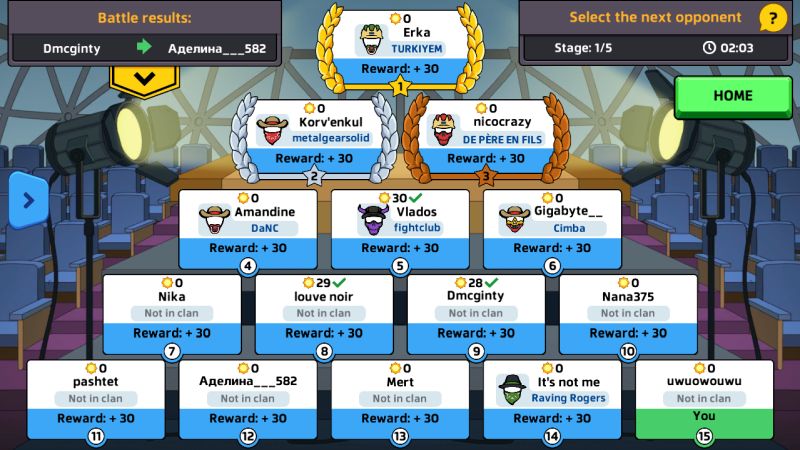 Tournaments you join with a ticket give out more resources than the ones you join with Food. Once you join a tournament, the system will match you with 14 other players. From this pyramid-styled screen you can select which opponent to fight. You can only fight someone once, and you win tournament points by beating people in fights, whereas a loss means you get 0 points. The amount of points you get from a win depends on how quickly you kill your opponent’s team and on their position in the tournament at the time of the fight.

When you tap on an opponent’s name you can see their team’s battle power compared to yours, and you can decide whether or not to actually fight them, or to back off and select someone else. It goes without saying that you should only select opponents you think you can beat. You fight in up to 5 stages during a tournament, and you don’t necessarily have to attack during one of the 5 stages, although you are going to lose the opportunity to attack if you don’t. 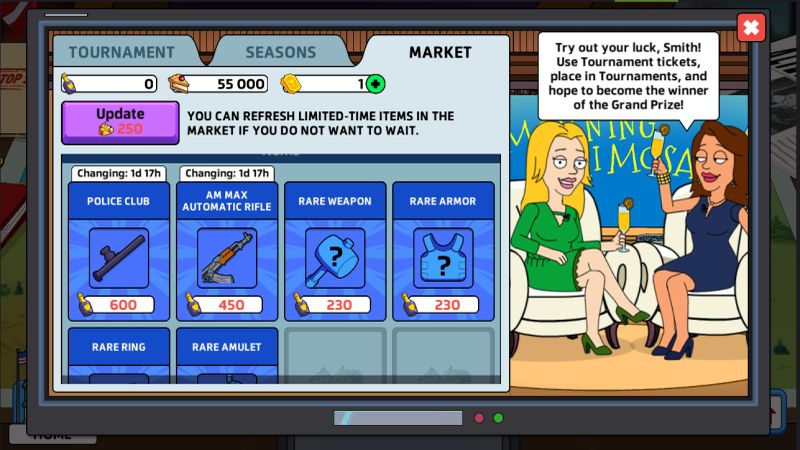 The rewards you get depend on your position at the end of the tournament. You get a chest if you end up in the top 3. You can also earn Bottled Mimosa, which you can spend in the Morning Mimosa’s Shop to buy Equipment for your Rogers, and even powerful Artifacts that will help you in your battles.

The strategy is quite simple: fight the highest ranked player you think you can beat. Thoroughly check the top player’s battle score, if it’s too high, check the second player’s rank and so on, until you find someone you think you can beta comfortably. Make sure to do this with every new stage, as the positions might change, and suddenly the new top ranked player will be someone you can beat. In this screen you can also check how many points you can get for beating the player. 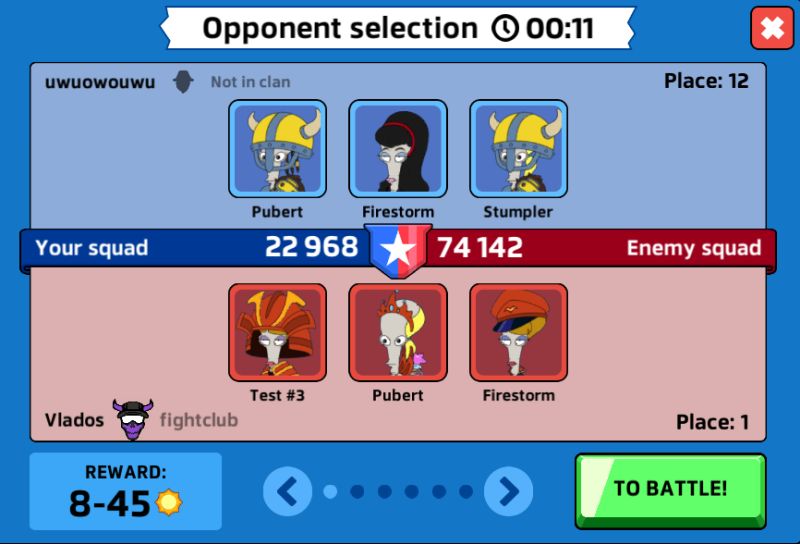 You cannot change your Rogers or their equipment once you enter a tournament, so pick them carefully before entering.

Battle power isn’t all that matter in this game. As with every auto-battle game, you will want to have the right Rogers in the right place for your fights. This depends on the weapon you want to give to your Roger. For example, armor matters more to Rogers equipped with melee weapons, as they will be in the front, and they will have to survive the assault of your opponents to protect who is in the back. Conversely, Armor is not as important to Rogers in the back, and they can focus more freely on dealing damage. 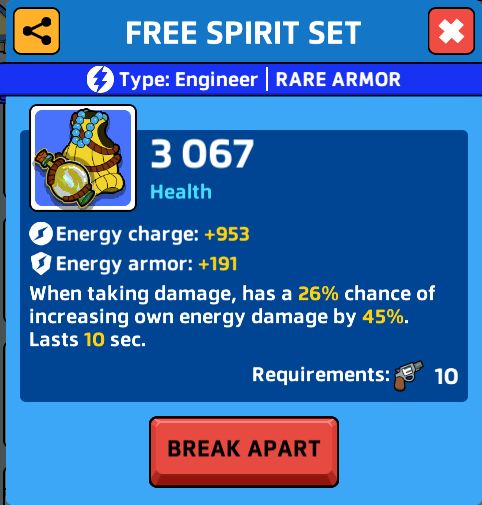 Rarer pieces of equipment carry additional abilities, and you should try to match them with the rest of your Roger’s equipment. For example, pieces of armor that give your Roger an increased chance of increasing the Roger’s energy damage when they get hit should be paired with energy weapons, while an armor that has a chance to increase the Roger’s defense when hit should be given to a frontline Roger. Most of these pairings are very obvious, so don’t worry too much if all of this sounds confusing, you will get the hang of it very quickly.

4. Attacking Other People’s Homes And Defending Your Own

You can also attack other player’s homes to ransack them if you wish. Attacking a home costs you Food. You can check how many resources you can get by attacking. You can see which players you can attack from the various maps, and you can even change opponents if there is nobody you want to attack, this costs you 2.500 Food. 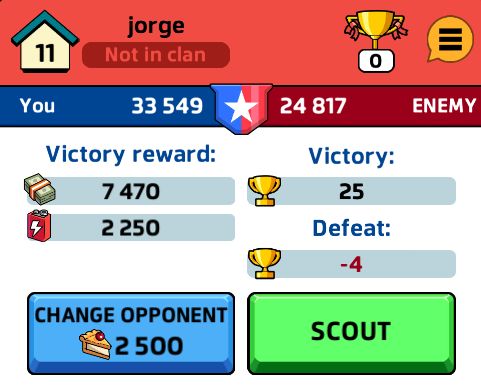 When you select an enemy you will be able to Scout them. This lets you see their home, and in this screen, you can also see which of your Rogers are participating in the assault, and inspect the Rogers in their Roger’s Place and see their equipment. This helps you decide whether you want to proceed with the assault. Be especially careful to inspect the enemy’s Arsenal, it’s easy to forget to do so.

Speaking of the Arsenal, this room is also your home’s biggest defending mechanism. When you start the game your Arsenal room is in shambles, and you will need to repair it before being able to use it. 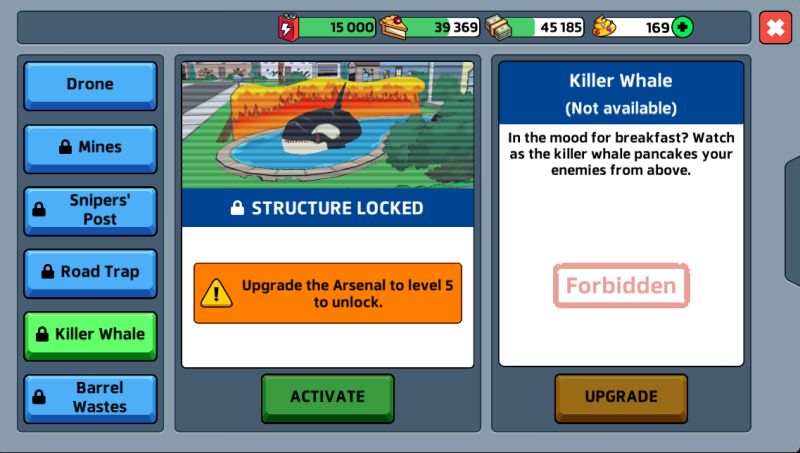 Each level of the Arsenal room unlocks an extra defense mechanism you can use when defending your house. These mechanisms are:

You can only have one defensive mechanism active at a time. There are also different types of each defensive mechanism, for example you could run an Atomic Drone, a Cryo Drone, or a Toxic Drone. You can also Upgrade the various weapons in the Arsenal for a price. This costs Money and takes a lot of time, but it’s worth it.

Naturally, your Rogers will be your home’s main defense mechanism. Only the Rogers in Roger’s Room are going to participate in the defense, so make sure to always have your fight-ready Rogers in there.

5. How To Craft Combat Powers

You can create Combat Powers in the UFO Lab. You can activate these powers during a fight. Once you have crafted one you have to equip it. Be careful, they are single use powers, meaning you will have to recraft them whenever you use them. These powers are:

– Laser Shot: deals 3000 damage to an enemy unit
– Mutagen: increases the damage dealt by all allies by 15% for 10 seconds
– Nano Shield: reduces the damage taken in battle by all allies by 10% for 10 seconds
– Target Heal: restores 4000 health to one of your Rogers
– Alien Ally: summons a Space Wanderer to fight on your side
– Ice Trap: freezes all enemies for 2 seconds, making them unable to move
– Great Beam of Fire: deals 4000 damage to all enemies hit by the explosion it causes
– Heal Perimeter: heals all allies by 6000 health in 8 seconds

When you build the UFO Lab, you only have access to Laser Shot and Mutagen, and then unlock one more craftable power for each level of the lab. Both crafting these powers and upgrading the lab costs Energy, so a system producing lots of Energy is a must later on in the game, when your Rogers alone won’t be enough to win fights for you, and they will need the extra oomph to win their battles. 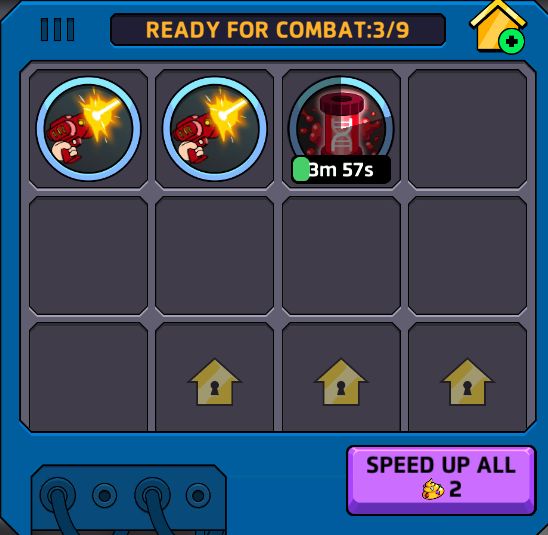 My suggestion is to always craft more copies of the powers you already have, since it takes some time to get them going. This way you never run out of powers to use in combat, plus you will be constantly using your Energy, allowing you to not upgrade your Energy Storage Room as much, which ultimately saves you a lot of resources.

This concludes our advanced guide for American Dad! Apocalypse Soon. If you have found out about any other tip or trick you would like to share with us fellow plaíers, make sure to let us know in the comments. Have fun with this deep game that also carries with it the typical American Dad humor, and good luck in defeating those aliens and their brainwashed peers.

How about a tutorial on solving the mini games. I am still on the bridge one