Despite its seemingly silly premise, Amateur Surgeon 4 is shaping up to be quite a popular title. This Adult Swim game for Android and iOS devices allows you to play doctor like you might have as a little kid, but with tools no sane doctor (or should we say, surgeon) would use, such as a pizza cutter, some dubious-looking gel or ointment, and even a chainsaw. And while this game is meant to be a fun take on the otherwise serious concept of surgery simulators, it can often be hard for you to complete the levels. We did offer you some walkthroughs for those levels, but let’s admit it – with specific steps to follow and time limits, your precision and speed will be tested, and how.

Things can be much easier for you if you’ve got partners helping you perform the operations, and you may be wondering where you can find these partners, and what these partners do. We shall be answering both questions in this Amateur Surgeon 4 strategy guide, where we teach you how to get more partners, and list down all the partners in alphabetical order (per guide).

How To Get More Partners

Before we tell you more about each of the individual partners (there are 32 all in all, which is why we’re covering them in a two-part guide), we’ll start out by offering some general advice on how to get more partners. Basically, you will be unlocking them in the Re-Generator, which, as we see it, is a fancy way of saying that you need diamonds in order to add more of them to your lineup. And you won’t be able to choose partners either – Adult Swim has made things challenging by making the draws randomized. But as the company also gives out a lot of free diamonds to players, you could do well for yourself simply by buying a five-pack of partners.

As we said in our list of general tips and tricks – our first strategy guide for the game – it’s best to buy the five-pack of partners. The good thing about this is that you get one guaranteed rare partner, while offering you a lot of bang for the buck. It’s also possible to take advantage of special offers and add a new partner or two, or by buying diamonds with some real-life money. If you choose the latter option, save some money by taking advantage of the bonuses. Additionally, you can take part in the special events, complete missions, or simply log into the game every day to get more diamonds.

Special Ability: The Absorb-O-Tron is a robotic sheep that makes use of Woolen Fury to mop up liquids and goo.

What They Do: This robot is skilled in removing poison and other liquids that may spill during your surgeries, thereby replacing the syringe in those cases.

When To Use Them: Any time you’ll need to use the syringe a lot.

Special Ability: The Risky Business ability helps you to find a Bleed Diamond, but this ability also could result in Ted slashing up your patient indiscriminately.

What They Do: Like some of the partners in the game, Ted can do more harm than good, as he appears to excel most in randomly wounding patients. But with those additional cuts comes a greater chance to win a diamond, as well as improved odds of collecting more coins.

When To Use Them: As Ted’s special ability can be more destructive than productive, he’s best used in levels you’ve replayed and completed multiple times. But you should be absolutely sure you’re 100 percent familiar with the level in question, in order for him to maximize his diamond-scavenging potential. Additionally, you can make Ted’s auto-triggering power-up work multiple times in the same level if it’s a particularly long one.

Special Ability: She can save you the need for a vacuum by sucking some debris out with her Scarab Sweep.

What They Do: You’ll meet Barbara fairly early on in the game, and she will likewise be the first partner you unlock. Again, it’s all about vacuuming the yucky stuff (blood spatters, etc.) that would require a vacuum in all other cases.

When To Use Them: As one of the first partners, don’t expect much from her; actual vacuums are arguably better. But she can help save you some time in stages where you’ll need to do a lot of vacuuming.

Special Ability: The Critter Buster is self-explanatory – Bessie is an auto-critter zapper who could take care of those bugs when they show up in large number.

What They Do: It’s all stated above; Bessie kills bugs, and does so with her shotgun.

When To Use Them: Any time you’re playing a level that’s rich in critters. Zapping them with your car battery may be tedious, but Bessie should make things much easier.

Special Ability: His ability, MY SHINY!, works by helping you find goodies inside patients. He’s useless, though, when it comes to the actual medical/surgery stuff.

What They Do: What do we mean by goodies? We’re referring to the coins found inside patients, and those coins can add to your coffers if you tag Filthy in during operations.

When To Use Them: You want Filthy Nowe on your team during levels you’ve played, replayed, and completed time and again. Replaying means grinding, and what better way to grind if you can earn a ton of extra coins in the process?

Special Ability: Nicht So Schnell. That’s “Not So Fast” in German, and using this ability allows you to freeze critters.

What They Do: As mentioned above, he freezes bugs, albeit for a short period of time.

When To Use Them: Normally, you can rely on Boomin’ Bessie in those critter-rich levels, but in case she’s not available, you can have Weiner handle the dirty work. Unfortunately, those critters won’t stay frozen for long, and that would require you to quickly zap them with the battery, and we mean quickly.

What They Do: The Chainsaw can be hard to use, but Katie can take care of all chainsaw tasks without you lifting a finger. (Except when tagging her in, of course.)

When To Use Them: Definitely have Katie around for Sudden Death missions, as those are going to require the chainsaw. You can also bring her in during any level that would force you to use the chainsaw on your patients.

Special Ability: Max’s special ability, Embrace the Chaos, removes an injury, albeit with a twist. That’s because those injuries are transformed into completely different ones, but not necessarily healed.

What They Do: You’ll want to take extra care when using Max as your partner. While you’re operating, he will cast a spell, and that usually means more trouble for you. One injury will inevitably change into a different injury altogether, and that could throw you off and force you to change things on the fly. The only upside of having him around is the coin and diamond bonuses, but other than that, Max Chaos lives up to his name, and then some.

When To Use Them: Due to his penchant for creating maximum chaos, Max is best used in the early levels, or in those levels that you can complete quickly, and know like the back of your hand. You can also use him in levels where you have the luxury of taking your time, but it’s important not to take up too much time, as you won’t get any rewards if the surgery isn’t successful.

Special Ability: Mr. Giblets uses the Lick of Life. As he has an extraordinarily long tongue, he can apply the Pain Away gel on hard-to-reach spots.

What They Do: As we explained above, Mr. Giblets specializes in applying gel on patients. Just make sure to tag him in so you can save some valuable time when rubbing the gel on those cuts!

When To Use Them: If you’re working on a patient with several smaller cuts, or in any situation where you have to make liberal use of the gel, that’s when you should tag Mr. Giblets in, especially if you’ve just used the lighter to cauterize.

Special Ability: In order to use Doctor, When?, tag the Professor in so you can buy more time for your operation.

What They Do: Again, this one’s easy – the Professor specializes in giving you the luxury of time, and that’s something you won’t often have in this game. But if you have him as your partner, you can use his ability multiple times within the same operation.

When To Use Them: Any time you’re dealing with a long, back-breaking procedure, you’ll want to have Professor Rippov ready. You’ll definitely need him in the latter levels, as well as the difficult ones where the timer makes it hard for you, and Special Events, which are typically harder than the basic levels.

What They Do: Have him around if you need to boost a patient’s heart rate for one reason or another.

When To Use Them: There are some levels where heart rate needs to be taken more seriously, and that’s where you can have him help out. These would usually be levels where you need to use the chainsaw, or if a patient has several big wounds.

Special Ability: ESP. It’s what you may think it is in context of the game – spotting all injuries, visible or not.

What They Do: If you want to know all of a patient’s injuries right off the bat, leave it to Stoolie to spot them for you.

When To Use Them: The scanner is a valuable tool, but if you need to use it far more often than you usually do, have him take its place so you can spot those hidden injuries. 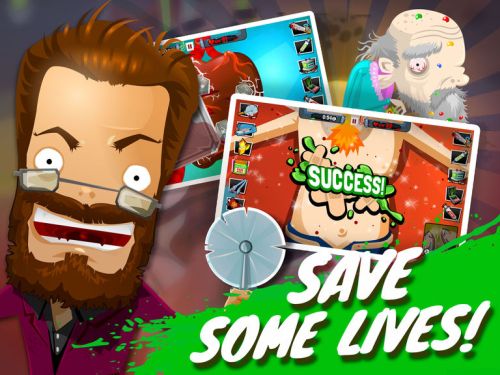 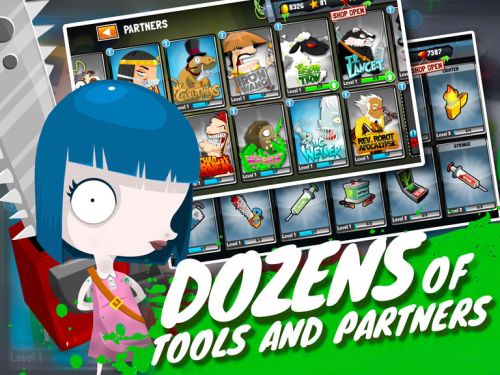