Zombieland: Double Tapper is an addictive clicker-RPG developed by Sony Pictures Television. In this game you build up a squad to deal with progressively bigger waves of zombies, and use the coins you earn from defeating zombies to upgrade your party. Your team automatically earns coins for you while you aren’t actively playing the game, and the higher level you have reached, the higher your coins earned while AFK will be.

1. Help Your Team Out

Zombieland: Double Tapper is a (mostly) idle type of game, but this doesn’t mean you can’t help your squad out if they area struggling with clearing waves. Each one of your heroes has a unique ability, and good usage of this ability will help you push through difficult stages, especially if you pick up skills that improve your ability by giving it extra effects. 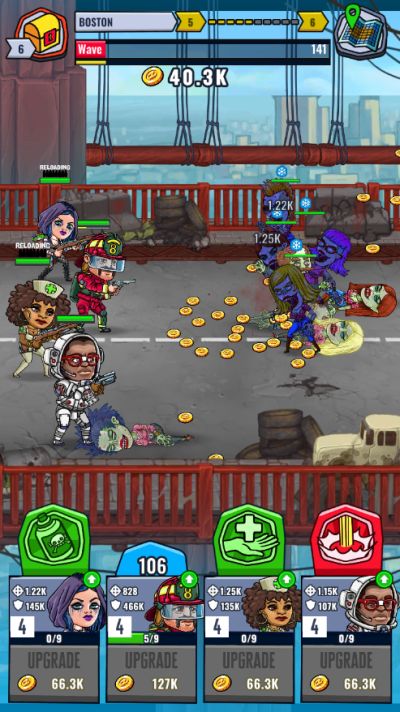 Each ability has its own cooldown, and some skills allow you to lower this cooldown or reset it entirely. These abilities are so powerful they can turn even very hard levels into relatively easy ones, for example take a look at Charlotte’s ability: Poison. Poison halves the HP of all enemy zombies for 6 seconds (duration increases with each level up), and if you level up the Weakness is Glorious skill the Poison will have a chance to stun enemies for 7 seconds, or you can get a chance to reset Poison’s cooldown whenever a teammate dies. You can check the cooldown of each ability on the bottom of the screen, right above the hero’s portrait.

Lastly, sometimes special zombies will spawn within the wave you are currently facing, and you can use this to your advantage: you might want to save that freezing zombie for a little while to freeze as many zombies as possible, or you might want to kill that pesky zombie bomber as soon as possible before he reaches your team and deal massive damage to it.

Your heroes’ levels reset at the start of each stage, so you can try out different ways of skilling your heroes up every time and see which one you like the most. Different level-up paths also influence how your team works. For example, you might want to focus more on your heroes’ abilities, in which case your best path would be to take all the cooldown-reducing skills for each hero. This depends on which heroes you plan to bring to the level, and how many of them you can bring.

Other things you can play around with are the weapons, and this is also based on your team’s composition. Some heroes have abilities that improve their teammates’ shotguns, but there’s little point of picking up such a skill if you aren’t running any shotgun to begin with. 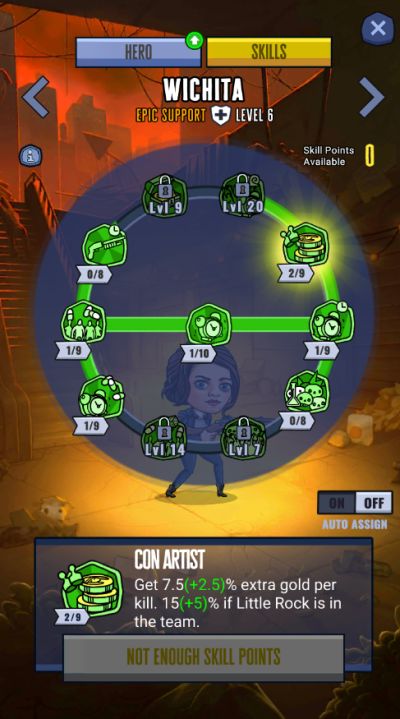 All of these factors are influenced by what heroes are available to you, and which ones you plan on bringing to the battlefield. For example, if you are running Nevada, you might want to run at least another female hero on the squad, as she has a skill called That’s How It’s Done that gives her a chance to reset a female ally’s ability cooldown whenever she uses her own ability, Battle Cry.

Some skills will work better when the hero that learns them is paired with another specific hero, take a look for example at Wichita’s Con Artist: it gives you extra gold when Wichita gets a kill on a zombie, and the amount of gold earned is doubled if Little Rock is on the team. This is just an example, but there are many other abilities that get enhanced this way.

Don’t forget to also upgrade your equipment, you can do so from the Weapons menu in the global map screen, or by visiting the equipment page of your heroes. Upgrading weapons requires the scraps specific to that weapon, so to upgrade a primary weapon you will need primary scraps, whereas power scraps will be needed to upgrade a power weapon, and melee weapons require melee scraps to get upgraded.

The rarer the weapon, the more scraps you will need to upgrade it, for example a Rare Katana will cost 20 scraps to upgrade from level 1 to 10. This is where blueprints come into play: once a weapon reaches level 10 you can’t upgrade it further with scraps, you will need to evolve it by spending blueprints. Once you do this, your weapon will evolve and its stars will increase by 1. Upgrading weapons gets very expensive though, going back to our Katana example, once you evolve it to 2 stars, you will need 100 scraps to level it up.

Always level up your weapons, and always evolve them whenever possible, they are one of your biggest assets.

3. Nut Up Everyone In Your Squad

The urge to focus on leveling up your highest rarity heroes is strong, especially since it costs exactly the same number of coins to upgrade an Epic rare like Nevada and a Common hero like Billings, but you shouldn’t focus all of your resources on your strongest heroes.

There are multiple reasons for this:

– You don’t want to lag behind in tap damage, since your tap damage is exactly 25% of your weakest hero’s primary damage. So when you need to intervene with your own clicking to supplement extra damage to your party you will want your tap damage to be as high as possible.
– Even the weaker heroes have useful abilities, in fact, they generally have abilities better suited in supporting their teammates.
– Also, it is only logical to level up your weakest heroes, as usually the cost to upgrade your highest-level ones becomes too high after a bit.

You should aim to have every member of your squad within a Nut Up level between each other. Nut Up is what happens when you level up a hero 9 times, the 10th level up will be a Nut Up! The hero gains a skill point to spend to upgrade one of their skills, and also becomes way stronger than with a simple level-up.

You can only unlock skills if you have leveled up the adjacent one, and also there are Nut Up level limits for the various skills, for example you can’t level up Nevada’s Valkyirie’s Ride if you haven’t gotten either Full of Holes or That’s How It’s Done beforehands, plus you will need to be at level 20.

4. Summon New Heroes And Get More Rules To Improve Your Team

You need SIM cards to summon new heroes. You can get new SIM cards simply by playing the game. You can summon either one hero at a time, or 10 at once with 10 SIM cards, which is what I recommend doing, since this will guarantee you at least 1 Rare or Epic drop in your summons.

Epic heroes’ stats are so much better than common heroes you absolutely need at least one on your team. You don’t necessarily want 3 Epic heroes on your team though, as statistics only matter up to a certain point. As we already said, common heroes’ abilities are generally more useful than rarer heroes’ plus it’s easier to Evolve them. You get a free summon every 24 hours. 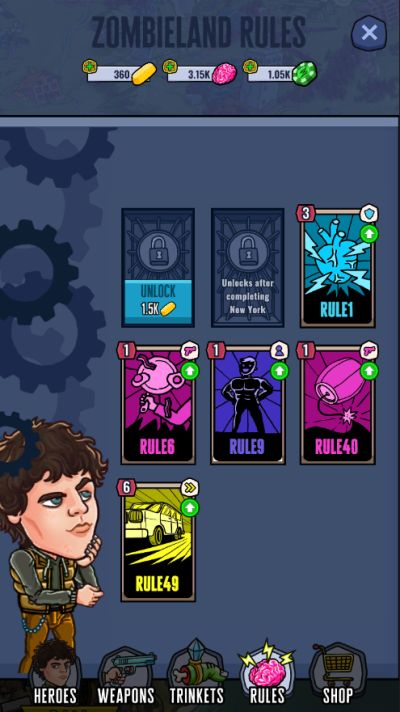 The game also runs events where it ups the chances to summon specific heroes, so if you need one of those, make sure to focus on those events first. You don’t use the regular SIMs for these summons though, what you use are the Tracked SIMs, which you can earn by completing your weekly quests.

If you don’t like your current rules you can always replace them with another random one, you do so by spending your Tokens. You can start rerolling once you clear the Richmond level. Rules provide the biggest boost to your team’s strength; it is amazing how powerful they are. For example, Rule 40, Sprinkle Gunpowder increases the damage of your team’s primary weapons by 10 times at level 1. A level 5 Sprinkle Gunpowder will increase the damage by 51 times.

Not all rules are as good unfortunately, but there are plenty of great ones, so reroll the worst ones away and enjoy huge boosts.

5. Do Not Be Afraid Of Restarting Levels

It takes a while to progress through the multiple waves of the game, and as early as the New York level you have to clear 50 stages to progress to the next stage, and this number quickly raises to 100 for Philadelphia and Richmond, and 150 for Pittsburgh. Sometimes you are super close to reaching that milestone, but seem unable to clear the boss in time before they build up their rage meter and annihilate your squad. This is where the Cash In feature comes into play. 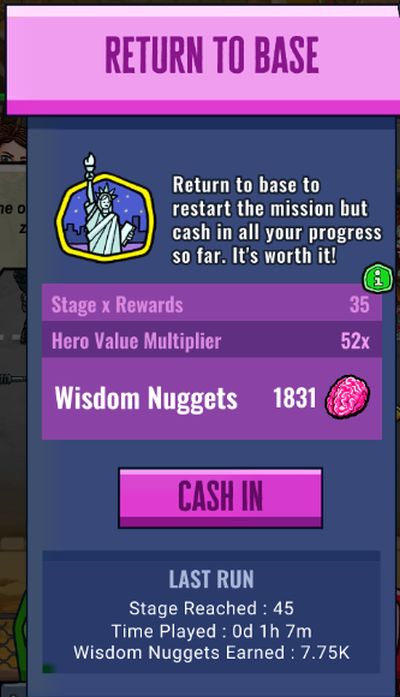 Cash In lets you collect rewards based on how far you got in that level. By doing this you restart the level too, which is why it’s such a difficult decision to make, as all of your hard work up to that point will be for naught.

It’s important to cash in when you are stuck at a specific stage, as this will give you enough Wisdom Nuggets to get more rules and upgrade your current ones. You cannot cash in before reaching stage 10 of a level. If you find yourself unable to progress it’s time to cash in and come back stronger next time. Also consider going for a different upgrade path.

6. Collect All The Freebies And Clear Your Quests

You can check your daily and weekly quests in the Events tab in the global map screen, as well as all the other bonuses like your Login reward, and extra quests that will earn you even more goodies. 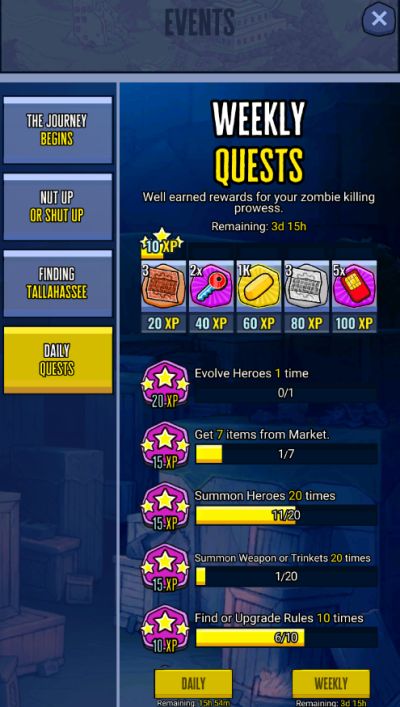 Daily quests are easy to do, and you can earn SIM cards by doing them. Other rewards include Reroll Tokens, Random Scrap, Twinkies, and Common Blue Prints. Daily quests reset every 24 hours. Weekly quests reset every week, and you can earn up to 5 Tracked SIMs by completing them. Tracked SIMs are special resources that allow you to summon in the special events, where certain heroes have higher chances of appearing than usual.

The other sections on this screen are dedicated to specific quests: Nut Up or Shut Up aims to help you figure out what you can do within the game, and will earn you various rewards, including a rare weapon, tin foil, and SIM cards, whereas the Finding Tallahasse quest will reward you with the Epic hero Tallahasse when you complete all of the missions in it.

This wraps up our beginner’s guide for Zombieland: Double Tapper. The game is pretty fun and can progress even without us opening it. The game rewards careful planning and good ability usage, and it has a nice art style. If you have found out about any other tip or trick that you want to let everyone else know about, make sure to do so in the comments. Until then, keep those zombies at bay!

How do power weapons work?

Were can I find a list of the heros? For example which ones are Rare, Epic... etc