Mobile game developer Vizor Interactive has launched a new game for Android and iOS platforms called Zombie Castaways, and you may be wondering how this differs from other zombie-centric titles. Unlike most other games, where you play the role of a human (or humans) trying to get rid of the pesky zombies in a zombie apocalypse-like situation, this game is the “friendliest” zombie game out there. To be more specific, this is an exploration, farming, and town-building game where you can explore multiple islands, cook different “bizarre” recipes and grow a variety of plants. You’ll also be dealing with friendly and funny zombie workers who will help you in spiffing up your island and running the factories, as you go through a “moving story full of humor and love.”

Is this some sort of Bizarro-world where zombies are nice, law-abiding citizens who don’t stalk humans for brains? That’s how it seems, as this is a quirky new title where the zombies, for once, aren’t fearsome undead creatures for you to kill. But there’s still a lot to learn about this game, which is where our Zombie Castaways strategy guide comes in – chock full of general tips and tricks to help you regardless if you’re a new player or an experienced one looking for an extra edge.

1. How Can You Easily Find Items? 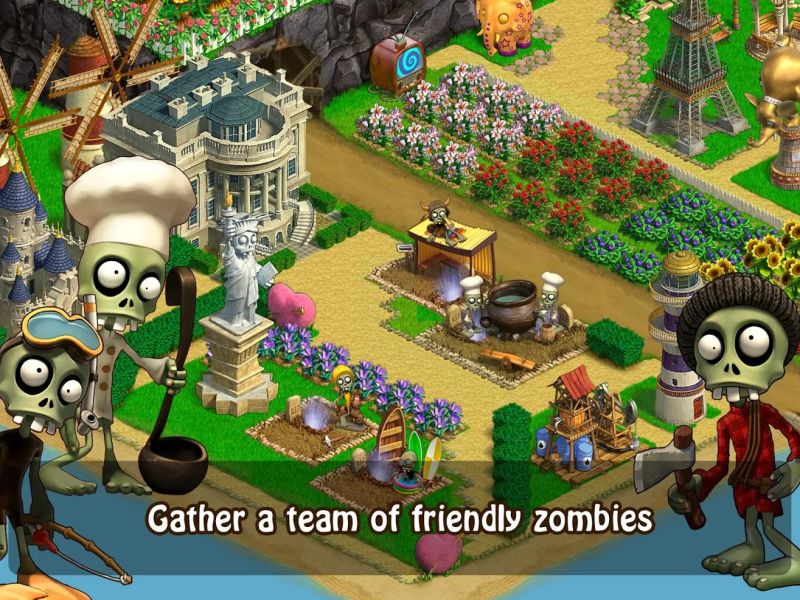 As there are recipes aplenty for you to cook, among other things you can do to turn those islands into a zombie paradise, there are also myriad items which you can collect as you explore the in-game world. But don’t panic if you’re not sure where you should be going to find a certain item. Tap on the [i] near the item on the upper right corner, and that’s going to pull up some information on the item, such as where you have to go to find it and how you should be using it.

2. Save Time By Using Swiping Motion

At times, you may find that your garden had grown way too fast for you to handle, with a seeming surplus of plants for you to harvest. Never fear – instead of tapping to clear things up, you can just swipe your finger on the screen for quicker results. Hit the action icon and swipe across the garden beds so you can harvest without hassle. And as a bonus tip, you can also swipe on the screen if you’re doing some treasure-hunting – yes, treasure-hunting is one of this game’s many, many features! 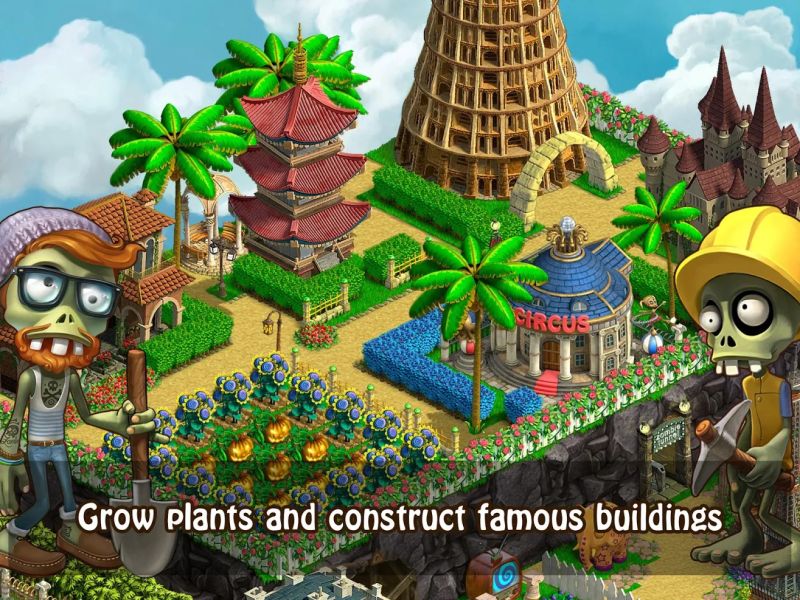 See, Zombie Castaways is really the friendliest zombie game out there. Some buildings in this game come with their own roulettes, and you can spin each of them every few hours to win free prizes. More buildings means more chances of them having roulettes, and that means more prizes for you. And in case you missed it the first time, they’re free.

Zombie Castaways may be advertised as an offline game, one you can play on your own without having to deal with other players. But you would still want to connect your game to Facebook. Why is this the case? Simply put, this allows you to switch from one device to another without losing your progress. If your game’s connected to Facebook, you can make progress at home on your tablet, then continue where you left off while using your phone outside of the house, for instance. 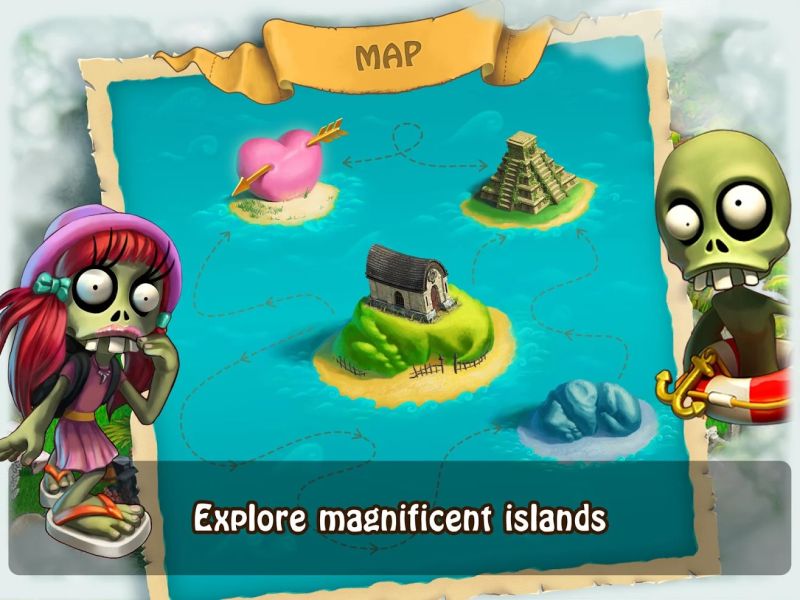 This may sound like a common sense tip, but we’re going to mention it anyway, as there may be some of you who need some help checking out the other islands in the in-game universe. Go to the globe icon in the lower left corner of your screen, tap on it, and view the map for yourself. You will, however, have to build a pier to unlock new parts of the map, and when the pier’s ready, tap on the yellow ring to sail to that island.

6. Watch Ad Videos In The Zombie Cinema To Get Some Goodies

The zombies in this game, as it turns out, enjoy watching movies. But it’s not those kinds of movies (zombie flicks) that you may be expecting – the Zombie Cinema serves a purpose mainly for you, the (obviously human) player. Head to the Cinema and watch a short advertisement video; depending on what you choose, watching these clips can give you buffs for woodcutters, stone miners, cooks, plants, and treasure hunters.

7. Dig Your Way To More Treasures 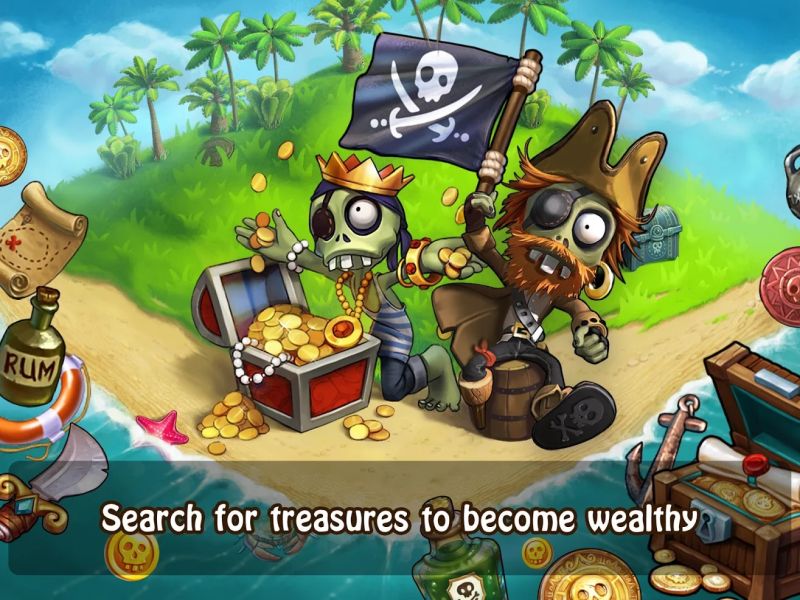 Remember what we told you earlier about treasure hunting? Here’s one tip that could also help you if you want to find more of these valuable treasure chests. Use the golden shovels during your treasure hunts, in hopes of finding the secret treasure. After you’ve found it, keep on digging underneath and you’ll get more free gifts.

8. What Should You Do If Your Water Well Turned Into Gold?

Your water well in the game may turn into gold and may no longer be capable of giving you instruments. But that’s not necessarily the end of the world – not by a longshot it isn’t! Tapping on the golden well will allow it to give you a final offering of tools. And you can always build yourself a new water well, and look forward to more and more instruments with each well you create after the previous one turns into gold.

9. How To Speed Up Work On Your Islands 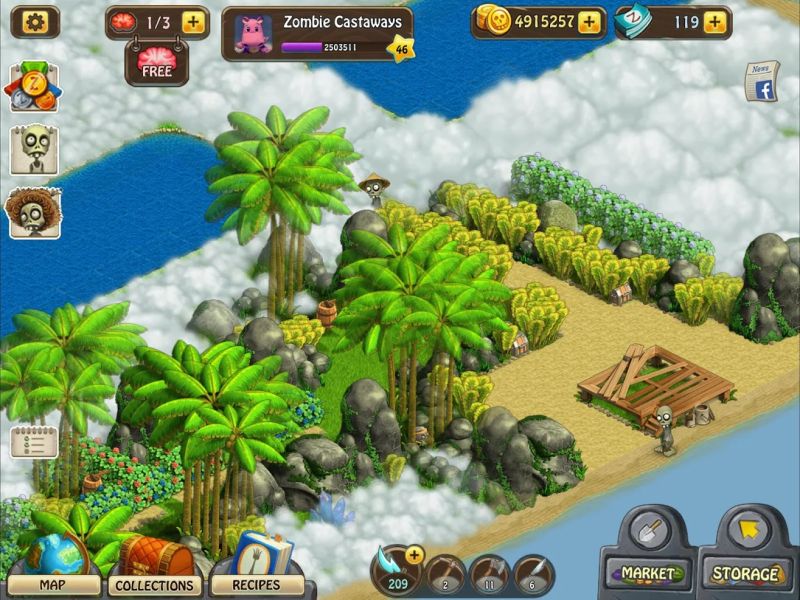 Need more help clearing the island out faster? Why not hire two zombies instead of one? May it be a woodcutter, a cook, or whatnot, two zombies work faster than one zombie would. You also can use the instruments produced by Love Island’s wells, as they will allow you to cut grass, remove stones, and chop down trees. Keep on using these tools, as you’re only allowed to save up to 100 examples of each tool.

Where is the Canyon in the Pirate Island??? Help mepleas

Anyone have any idea to help me, all of a sudden about 10 days ago I stopped getting the daily gifts? I checked for an update but there is nothing new! Thanks

depends on which tree/stone you are cutting

My woodcutters and stone miners all collect at different rates. shouldn't they all be the same?

For example, one wood cutter gives me a wood piece every 3 minutes, bu the other one give a piece of wood every 6 minutes. My stone cutters take even more time 12 minutes for one stone and 8 minutes. why aren't they all the same?