Millions of people all over the globe are creating their unique digital worlds, and Worldbuilding is a game which also provides players with an opportunity to assemble their own Lego playing set. Worldbuilding is a relatively new addition to the mobile gaming arena, but the game created by Mdu has already attracted numerous players. They all want to have access to a vast world where they can fully express their creative freedom. However, this is sometimes easier said than done, since the game contains certain elements which can cause harm to your character.

That is why our Worldbuilding tips, cheats and strategies covered in a complete guide is the best resource for novice players, and our 8-point list will provide players with the essential knowledge for surviving the game. Therefore, stay with us, and read all about the most important tactics you need to know if you want to assemble the most amazing structures in the Pixel-style world. So let’s not waste any of your time and instead let’s move on to our Worldbuilding tips, tricks and cheats right after the jump!

1. Pick The Right Game Mode For You

Not all players have the same needs and preferences when it comes to playing a game such as Worldbuilding, and that is why this game offers two distinct modes. They are called the Survival and the Creative mode, and players can select the preferred game mode whenever they want to create a new world. 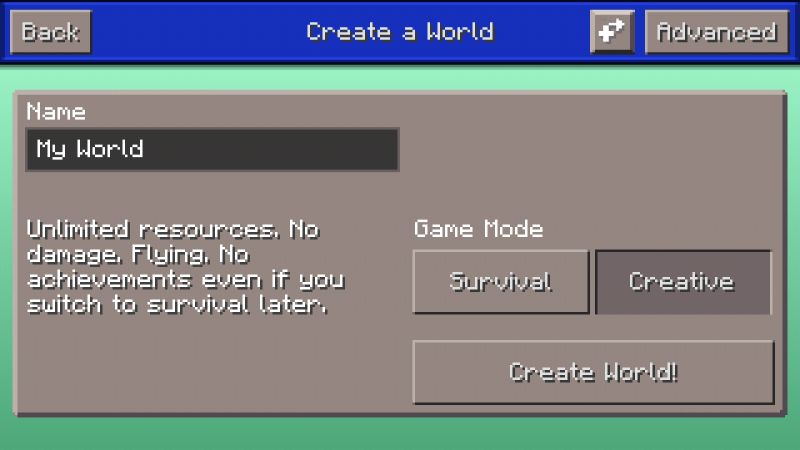 The Survival mode offers a real gaming experience, which includes enemies, limited resources, and even death. On the other hand, the Creative mode has no limits whatsoever, which translates to having unlimited resources, perfect health at all times and so on. Typically, the players use the Creative mode to practice their new skills. By doing so, the beginners can learn the ropes and become acquainted with all the possibilities of the game. The Survival mode in Worldbuilding is where all the fun happens, and we will focus our attention on this mode in the remaining part of this guide.

Being dropped off in the middle of a picturesque environment can be a little bit enchanting, and novice players usually have a tendency for wandering around aimlessly during those first moments. Unfortunately, the daytime in Worldbuilding lasts for only 10 minutes, and this period goes by in the blink of an eye if you are not careful. Before you even realize, the night has descended, and you have no shelter and no useful resources on hand.

In order to survive the first night, we advise the players to immediately get to work! For instance, they should collect some wood and create a Crafting table, which is a highly valuable item in Worldbuilding. Also, the players should create a pickaxe or a shovel, and these items can boost the process of collecting resources. Of course, a sword can help with fending off pesky monsters, and that is why the players of Worldbuilding should always carry around a sharp blade.

3. The Crafting Table Is Where All The Magic Happens

Since we briefly mentioned the Crafting Table, let’s take a moment to explain the role of this item in more detail. Once you start the game and collect some wood, you can visit the Inventory and transform those wood blocks into wood planks. By acquiring the planks, the players will unlock the Crafting Table, which basically looks like an ordinary brown block, with a few markings on the side. However, this block has ‘magical’ powers, and once you start using it properly – a whole new world of opportunities will open up for you! 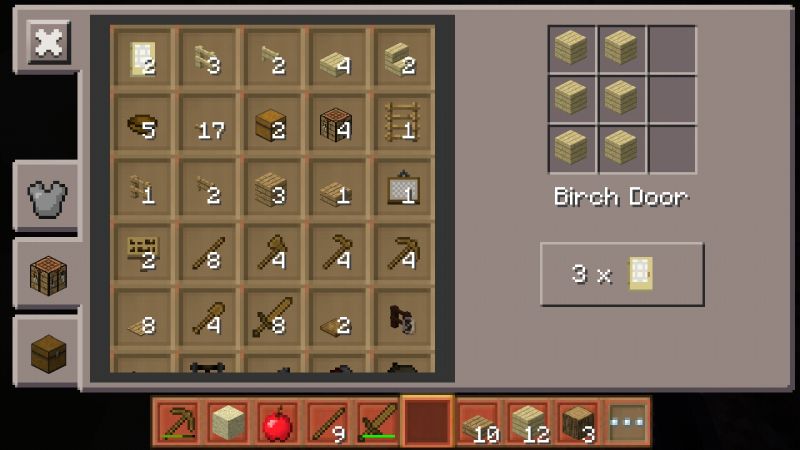 For example, the Crafting Table can help you transform materials such as wood or stone into useful items. We already mentioned some of those items, and novice players will not use a lot of tools except for the shovel, pickaxe, and a sword. By clicking on the Crafting Table, a grid with available options will appear, and the players can craft all sorts of items. Of course, the only requirement is that sufficient resources are acquired for the particular item.

4. Create Some Shelter As Soon As Possible

As the name of the mode clearly suggests – the goal of Worldbuilding is to survive. By living to see another day, the players can continue working on their projects, i.e. they can update their structures, mine shafts, houses, and so on. However, the first night in the game is definitely the hardest, and we advise the players to create some shelter early on. If you stay behind walls, the mobs cannot get to you, and believe it or not – the hordes of zombies and creepers are more than eager to ‘welcome’ a newbie. 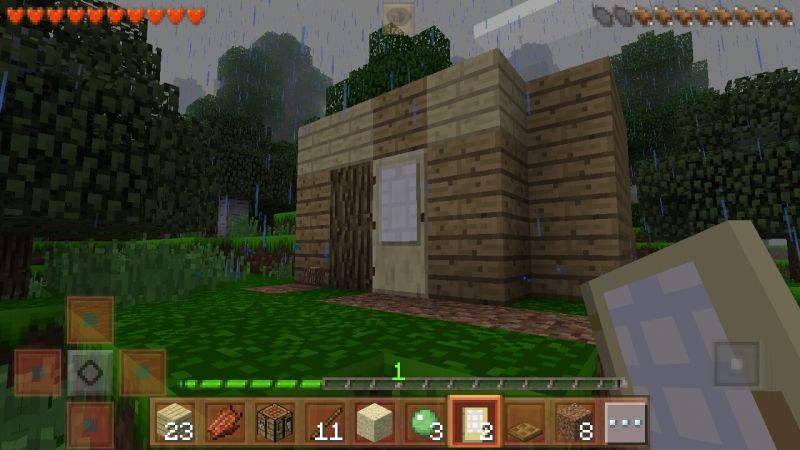 One of the best tactics you could use for building a shelter is to use the existing natural blocks to your advantage. In other words, let the mountains act as one or two of the walls and then just close off the area from the remaining sides. Also, another helpful tip is to place a door or leave a hole on the roof since this will help you see the daylight when the dawn finally arrives.

5. Use Animals For Food And Armor

If you happen to be a vegetarian or vegan, we are afraid that you will not like the next tip in our Worldbuilding guide. However, your character in the game is a meat-eating individual, and he can improve his health stats by digesting sheep, chickens, or even cow meat. The fauna in Worldbuilding is diverse, and there is a wide array of options for you to choose from. The hearts in the upper left corner and the chicken drums in the top right portion of the screen are the indicators of your health and energy. If they start to go down, it is time for a meal!

Other than being used as a source of food, some animals can help with the creation of armor. For instance, the cow skin can be a great source of leather, and if you equip your character with a leather armor – his stats will grow and he will be able to survive enemy attacks.

Just like the animals in Worldbuilding, the materials and the resources in the game are diverse and numerous. However, some of them will be more useful to novice players than others, and one of the most important materials is coal. Coal can be found on the side of a mountain or a hill, and you will recognize the coal blocks by their distinct black spots.

Why is coal so important? As you could probably grasp by now, the nights in Worldbuilding are pretty scary, and the only way to make the dark go away is by shedding some light on your surroundings. The coal is required for the creation of torches, but they are not the only items that can be crafted with the help of this useful material. That is why more experienced players typically start their own mine shaft by digging down directly from their shelter in a diagonal fashion. All the coal they acquire helps with the smelting the materials and creating more advanced items later on in the game.

As we just mentioned, the torches can be a life-saver when it comes to Worldbuilding, and we mean that literally. That is why it is important that the players quickly find a supply of coal, and that they also craft a sufficient amount of torches. As a matter of fact, you can never have enough of those light-emitting objects, and we suggest that you always have at least a few of these items in your Inventory. 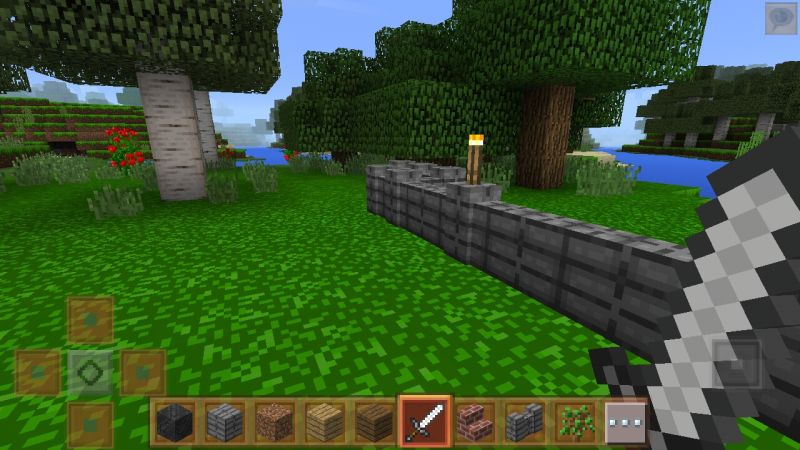 On the other hand, the positioning of the torches is of great importance as well. Once you start going down into the mine shaft, the caverns and corridors will become confusing. Needless to say – these areas will be covered in darkness as well. That is why we suggest using the good-old gaming trick – always place the torches on the left-hand side of the corridor you go through. When you want to go back, keep them on your right, and this will help you find the way.

8. Watch Out For Mobs

Even though the world of Lego blocks does not look menacing at all, some creatures in the game are pretty dangerous and they can cause severe damage to your character. The likes of skeletons, creepers, or zombies all wander around, especially in the dark, and if they get a hold of you – everything you created will go down the drain. That is why we repeatedly advised you to shine as much light as you can, but there are some other tactics you can use to save yourself and all of your progress. 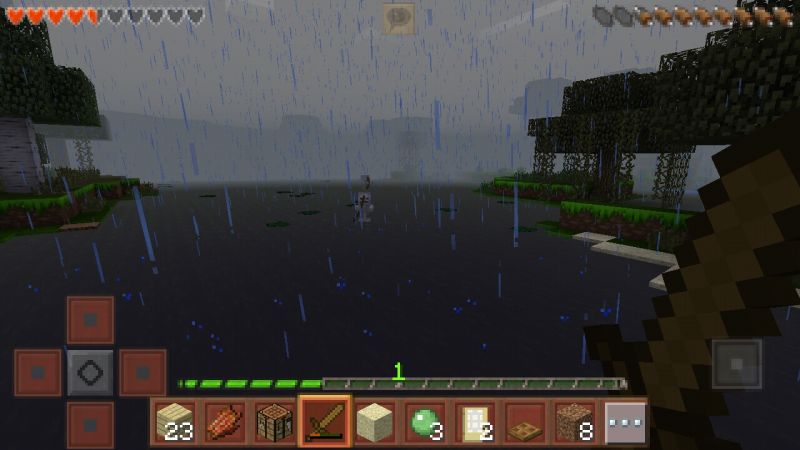 Every one of the enemies is followed by a distinct sound, and these characteristics can help you recognize the danger and evacuate the premises. Also, not all creatures have the same attacks, and this means that they should be treated differently. For instance, bow-wielding skeletons can harm you from a distance and this means that you should avoid them in a wide circle.

With this tip, we conclude our 8-point list and we sincerely hope that our Worldbuilding guide will be of use to players who are making their first steps in the game. If you are familiar with any other successful Worldbuilding tips, tricks or tactics, please drop us a line in the comment section!