The well-known series „How To Train Your Dragon“ is now in its third installment, and fans all over the world are anxiously awaiting to see the new adventures of the main protagonists of the movies. In the meantime, Ludia Inc. has released a high-quality puzzle RPG game named Dragons: Titan Uprising for iOS and Android devices. This colorful edition features all the most important dragons from the movies, but there is a lot more going on with this mobile game than meets the eye.

Every once and a while, Dragons: Titan Uprising will present the players with a brand new dragon. Just like any other baby animal, these dragon hatchlings look very cute and cuddly. Unfortunately, once you train them and level up their XP points – charming little babies will turn into vicious monsters and flying beasts. 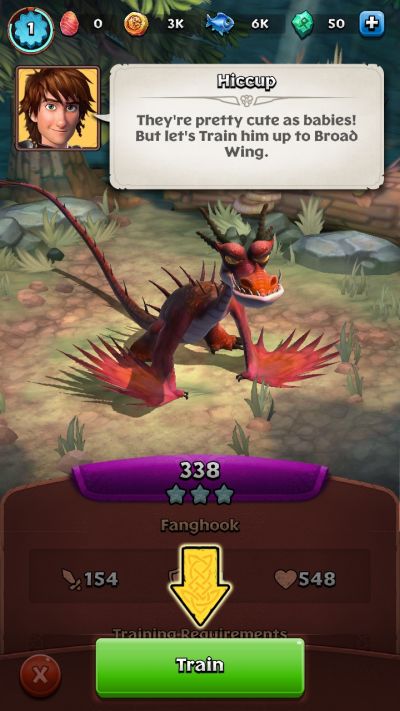 However, the goal of the game is not to cuddle with baby dragons all day long. On the contrary, you need to assemble a team of powerful fire-spitting lizards, and that is why we advise the players to Train their dragon as soon as possible. By clicking on the icon in the bottom left corner, the players will be taken into a section which displays all available dragons. The new ones will be clearly indicated, and then you only need to invest a certain amount of fish, which is one of the in-game currencies, to Train your new basilisk.

2. Level Up Your Pet Dragons

The world of dragons is not a place that offers a lot of mercy, and within the unfriendly skies – only the strongest will survive. Since not all of your dragons will have the same stats, i.e. some of them will be more powerful than others, you will have to sacrifice the weaker ones. In order to improve the rank and the stats of a certain dragon, the players have to feed them with another flying lizard which is of no use to them anymore.

Once you train your baby dragon, the next step is to Level him up, and this can be done only by consuming the XP points of other flying monsters. Babies grow if you feed them, and the same rule applies to the mythical creatures of Dragons: Titan Uprising. By selecting a dragon you want to sacrifice, the XP points will go to the one you want to Level up. When the process is complete, you will have a more powerful dragon at your disposal, but at the same time – there will be an empty slot in your collection of fiery beasts.

3. Combine The Strengths Of Your Dragons

Since the gameplay of Dragons: Titan Uprising centers around obliterating and taking down powerful winged monsters, your dragons will have to work together in order to complete the missions and quests. Besides the area of the screen where you can combine gems and match (at least) three of them to launch an attack, your five pets in the bottom portion of the screen will also act as an attack force. However, not all dragons belong to the same class, and that is why the players need to pay attention to the types of the monsters they have at their disposal. 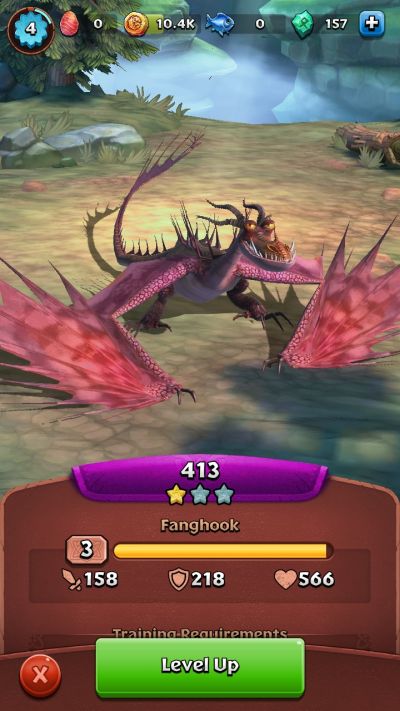 For instance, Dragons: Titan Uprising classifies the dragons in several distinct categories – blue, purple, yellow, and green. These classes are not all equally potent, and some of them will give you an advantage over the other. That is why we advise the players to always combine the dragon classes in a tactical manner and to pay attention to the two sings in the upper left corner of the playing screen. These symbols demonstrate the ratio of powers between different dragon types.

4. Assemble A Strong Team Before Every Battle

The enemies in Dragons: Titan Uprising will come at you in waves, i.e. your dragons will have to fight off several dangerous flying beasts. In order to successfully complete a mission, your team needs to survive the encounter. By combining the gems in groups of three or more, you will launch attacks on the enemy, but your dragons are the key to overcoming the opponents and progressing onto the next chapter of the story.

Ahead of every fight, at the pre-battle screen, the players are given an opportunity to assemble the best possible unit. According to our experience, the best course of action is to combine one healer with several powerful attackers. Different classes of dragons are also a good way to go. However, if you cannot decide for yourself, there is a button in the top right corner which will assemble the Recommended team.

5. Combine Attacks For A Stronger Effect

As we already mentioned, the game allows you to shoot the enemy out of the sky in two ways. The first method is by matching the gems, i.e. by playing the classic puzzle game. Once you assemble a combination of colors, the gems will explode and fly upwards, hopefully hitting the enemy dragons and causing damage to their health. The other method is by filling up your dragon’s rage bar, which is displayed in yellow beneath their pictures. Once this gauge is filled, the players can release an attack from their pet, and this usually means that a firing blaze will be launched at the enemies. 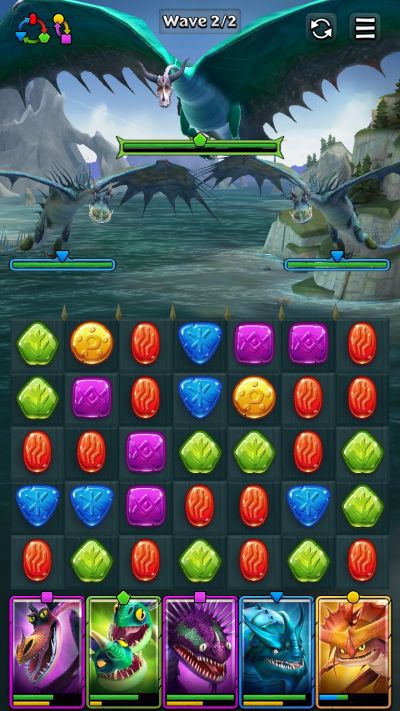 The best results in Dragons: Titan Uprising are achieved through a combination of those two attacking methods. In other words, we suggest that you play the puzzle game and try to make combos, but also to be ready to strike with your dragon’s specialty attack whenever you get the chance.

6. Use The Super Gems Wisely

The puzzle game in Dragons: Titan Uprising is somewhat different from the standard format of this type of games since the new puzzles in the game do not fall downwards. Instead, they appear from the bottom of the screen, and the players should always keep that in mind when matching the gems. Since the puzzles in this game come in all sorts of colors, the players will always find a solution that will result in a match. 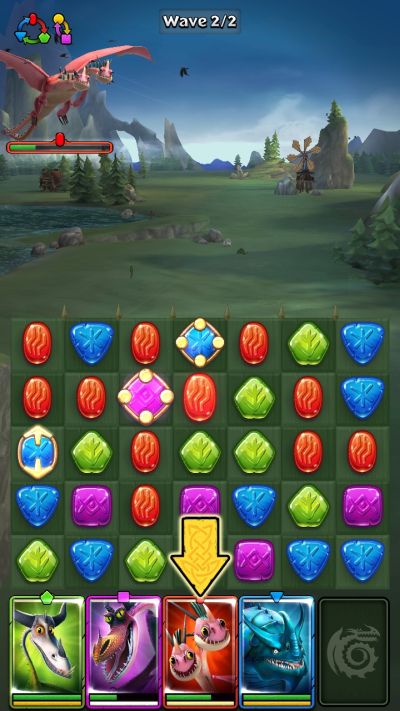 However, more powerful attacks are unleashed once you use the Super Gems, which look like precious stones wrapped in a gold frame. These powerful gems can evaporate entire lines of puzzles, both in a horizontal or vertical manner, and this can cause serious tectonic movement in the positioning of other gems. Basically, they will all move around, and the mayhem will often result in additional points for your team of dragons. That is why we recommend that you use the Super Gems as soon as they appear on the grid.

As they often say – the strength is in numbers, and this rule perfectly describes the situation in Dragons: Titan Uprising. The more dragons you have in stock, the more options you have. For instance, you can sacrifice them to boost the XP of more precious dragons, i.e. to level up those fiery pets that have elite attacking or healing powers. Or, you can train the new dragon and add him to your team of vigilantes. 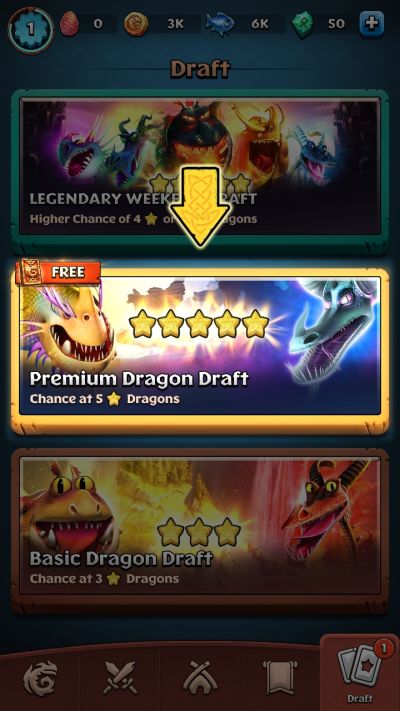 That is why the players should exploit the possibilities hidden within the Draft section, which is located in the bottom right corner of the Welcome screen. This area will help you summon a new dragon, and the players will receive Draft cards after almost every battle. Whenever you receive a card, head over to this section and add another baby dragon to your roster.

8. Upgrade The Facilities On Your Island

Besides the Draft section, which can summon up new dragons, there are other methods that can result in the birth of a new flying monster. For example, a Hatchery is a place that produces little fiery lizards every ten minutes, but the only requirement is that you have ten dragon eggs in stock. Also, your island is the place where some other facilities are located, namely the Fishery and Treasury, and it is vital that the players invest regularly in upgrading these areas.

Since the runes, fish, and scales are precious in-game currencies, it is best to have a steady supply of those resources. Once the players upgrade their facilities, they can collect more stuff. Aside from the Fishery and similar rooms, the Quests section can also be highly rewarding, and we advise the players to occasionally visit this room as well.

This tip concludes our comprehensive Dragons: Titan Uprising strategy guide, and we sincerely hope that our 8-point list will help the players on their quests through the Berk Island, The Frozen Tundra, and so on. If you happen to know any other successful Dragons: Titan Uprising tips, cheats & tricks, please leave us a message in the comment area!