World Soccer King is a new iOS game from Bluehole PNIX, a company that seems to specialize in social, casual sports games such as World Golf King. And as we mentioned in our World Soccer beginner’s guide, one shouldn’t mistake this game as being too casual, even if there’s very little management involved, even if there are less than 30 players (by our count) to collect, with none of them being real-life players. What’s real, though, are the human players you will be playing against as you move up from league to league — don’t expect the same old dopey AI that you can easily beat once you’ve figured out how it works! How fast can you go from the rookie league to the highest of the six available leagues the game currently has to offer?

Our first guide was packed with information, as we purposely set out to create a comprehensive World Soccer King strategy guide that could be used by beginners and intermediate players alike. But if you’re an expert player, meaning if you’ve made it to Stage 4 (Madrid) or beyond, you’ll want to check this guide out, as we’ve got our own selection of expert-level tips, as well as a couple that we believe could have been included in the first guide, but somehow missed out on.

1. An Addendum On Scouting

We’re not sure if our version simply wasn’t updated, or if it was a feature we had somehow missed out on, but in any case, we’d like to clarify that it is indeed possible to do some scouting on your opponent by tapping on their avatar any time during a game in World Soccer King. You will be able to view information on an opponent’s number of trophies, their win percentage, and their current formation, though your scouting of a player’s roster will all depend on how well you can associate a named player with how they look like. Still, it’s definitely better than nothing, and it should give you a decent idea of what to expect when out there on the pitch!

2. The Anatomy Of Bad Form

We already discussed bad form in our beginner and intermediate guide for World Soccer King, so let’s get a little more into this topic and explain what will be in it for you if you encounter one of these annoying slumps while playing the game. Typically, a streak of bad form begins once you lose to a less experienced team, or one with a lower winning percentage than yours. Sometimes, even a draw against a less experienced/less successful team will get the bad form streak going. Likewise, that also might apply if you’re coming off a game where you got beaten (or the game got tied) in the last 10 to 15 seconds or so, especially if it’s off your own sloppy pass resulting in the other team gaining possession. These are all things that could strike a dagger in the morale of real-life soccer teams, so even if you’re mentally sharp and not the type who’d commit frustration mistakes, your players might not be as strong as you are.

We’ve seen a lot of things happen when our teams are in bad form, and it’s not just the losing streaks. We’ve tried moving down one division/league lower to get things going against some weaker teams, only for our shots to look weak and uninspiring — no problem for the opposing ‘keeper to stop. Forward will also position themselves farther than usual away from the opposing goal. In one instance, we even saw a midfielder score a wild, long-distance goal while we were on a long losing streak — in World Soccer King, forwards seem to do 99 percent of the scoring! Either way, you have a couple options that seem to have worked for us — one, take a break from the game for a couple hours, or two, move down to the lowest possible league for some cheap wins.

Need to set your lineup quickly before starting a new game? Simply go to the player screen (the jersey button on the bottom menu), and hit the Auto Equip button on the upper left. That will automatically assign the best possible lineup for your team, though you may still need to do some fine-tuning, i.e. moving your best strikers, midfielders, and defenders, to the center. Even then, being able to assign all your best players in terms of rating with just one tap can be a real time-saver, especially when you reach the point where you’ve unlocked more than 20 players so far!

Point Capsules, as we’ve found out, don’t exactly work like they ostensibly do, meaning you won’t come closer to unlocking them by scoring more goals. Interestingly, they unlock faster as you play more games at your current level, with a win worth two points, a draw worth one, and a loss worth nothing. That’s the case regardless of which league you’re playing in — Moscow, Paris, Milano, all the way to the sixth and final league in London. So if you’ve got all your capsule stands occupied, you might as well move down a few leagues and beat some lightweight competition — whatever capsules you would have won (if not for your stands being full) probably won’t help you much anyway, and you probably won’t be losing any games and losing any trophies, unless, of course, you are uncharacteristically sloppy against those weaker opponents!

As we explained in our last guide, the uniforms available to purchase in World Soccer King are mostly there for aesthetics only. That means you’ll only want to purchase them if you’re overflowing with coins and can afford to blow a few thousands on something that won’t boost your stats in any way, shape, or form. However, there are some uniforms that specifically improve your team’s stats (meaning everyone on your team) if you’ve got them equipped. Click on each uniform to see the statistical boosts you can expect for all your individual players, but be prepared to pay a premium amount of premium currency — all the stat boost uniforms are priced at 900 gems! As a bonus tip, if you’ve got some spare cash to spend, you can buy a special uniform package once they’re selling for only $10 USD or its equivalent in local currency. Of course, this is completely optional and only recommended if you’re interested and have the real-world money, but you’re going to get a much better deal than what you’d normally get with $10 (which is, 1,000 gems only) — not only will you get a 900-gem value through the uniform, you’ll also get 600 free gems and thousands of coins on top of all that!

6. Should You Buy Special Drinks?

The short answer would be no, but when it comes to the long answer, read on and we’ll tell you why this is not a good idea. World Soccer King allows you to buy drinks — a Speed Drink for a 10 percent speed boost, a Power Drink for a 10 percent power boost, and a Premium Drink for 10 percent stat boosts across the board; all drinks affect each and every one of your players on the field. These are premium purchases, with the first two costing $2 USD or its local equivalent, and the latter priced at $4. While it would be a good idea to plunk down a few dollars for one of these drinks, assuming they were unlimited-use, or allowed you to use them multiple times, these are, unfortunately, one-use-only. That, in itself, should be reason enough for you to avoid these drinks, unless, once again, you can afford to drop a few bucks on a temporary boost.

7. Is It Worth Spending Coins On New Formations?

World Soccer King allows you to spend your coins on new formations, and in multiple cases where two positions (instead of one) are “reinforced,” or buffed when the formation is used, you can spend your gems on them too, just as long as you’ve got at least a thousand to spare. Since we don’t really recommend that you upgrade your Normal rarity players once you’ve got a lineup full of Rares and Epics, you might as well spend your coins on a new formation, but for the most part, we don’t see much reason to deviate from 4-3-3A, which bolsters your defenders, and is used by about 90 percent of the World Soccer King community.

Then again, there are some times when an opponent might try another formation to try and throw off all of the 4-3-3-using players; you wouldn’t be able to find this out until the match actually starts, but it does happen. So with this random possibility in mind, we recommend practicing with the other formations in the lower leagues; as we’ve noticed, your players will often be far away from their ideal position on the field during the first few times you play a new formation, and that could make goal scoring more than a bit difficult. (We figure this is to simulate the learning process as teams deviate from what’s tried and tested.) But the more you play using a certain formation, the more your players would gel. So with that in mind, we say yes — buy new formations and try them out, but make sure you’re doing so in the lower leagues.

8. The Video Rewards Aren’t Quite Right Yet World Soccer King is still a fairly new game, and that just means it isn’t perfect — there are some kinks that the developers haven’t quite worked out yet. For example, the Free Gift button on the bottom left of the main menu. While it may seem like all you have to do is watch one video a day to earn a progressively increasing amount of coins, until the seventh day, when you win a Silver Capsule, we’ve noticed that the video counter remains stuck at one day, regardless of how often you watch those videos. We hope this is something PNIX works out in the near future, even if the coin rewards aren’t really that great.

Notice how it seems as if almost every team tries something to this effect at least once per match? We’re talking about a short passing system near the opponent’s goal, which, we’d say, is as close as it gets to justifying why they call soccer (or should we say, football for the non-Americans) the “beautiful game.” Look at that crisp passing from one forward to another, as they try to find the best possible angle for the next attempt at a goal. And observe how they seem to score that goal more often than not. It’s not absolutely mandatory, but it’s still recommended that you practice those short passes — it allows you to use more of the clock, especially if you’re ahead, and it could keep your opponent on their toes more effectively than if you went for the quick goal attempt every time around! 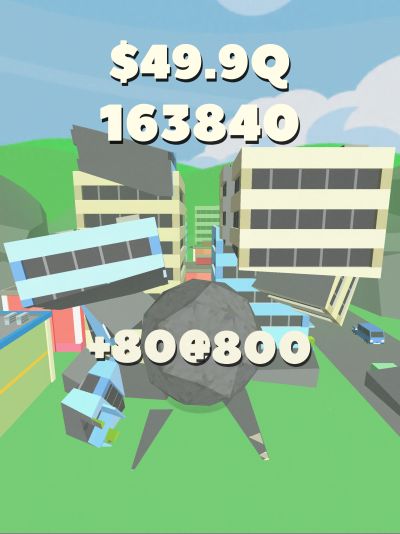 Next
Rock of Destruction (Voodoo) Cheats, Tips & Tricks to Get a Super High Score
Click here to cancel reply.