World on Fire is an exciting WWII era strategy MMO game developed by Camel Games. The goal of the game is building up your army to conquer the whole world. It’s a base building strategy MMO, you will start with a base with few buildings, and you will make it flourish by adding buildings, upgrading them, and training new troops. World on Fire has PVP elements as well, you can use your troops to attack other players to conquer them. There is no limit to how much you can expand, so keep grinding and you will eventually dominate the world!

If you are starting out in the game, stay with us as we will share a bunch of World on Fire tips, cheats and tricks in a complete strategy guide!

1. Make Sure Something Is Always Getting Done

Everything in World on Fire takes time: upgrading your buildings, recruiting new troops, fighting rebels, and collecting external resources, so, unless you plan of spending a lot of money in the game, the best way to maximize your efficiency is simply by never have your builders on idle. Fortify your base, increase the level of your Command Center, upgrade your Hospital, improve the production of resources by leveling up your Farms and Steel Factories, and keep researching new technology.

Another reason to keep spending your resources on improving your base is that there’s a limit on the amount of resources you can keep protected in your Depot, so if you keep spending them you won’t hit the limit. If you’re unsure on what to upgrade next, just follow the Main mission, which will tell you what you need to upgrade to progress. You can check what the game suggests you to build next in your base’s main screen, on the bottom left corner. 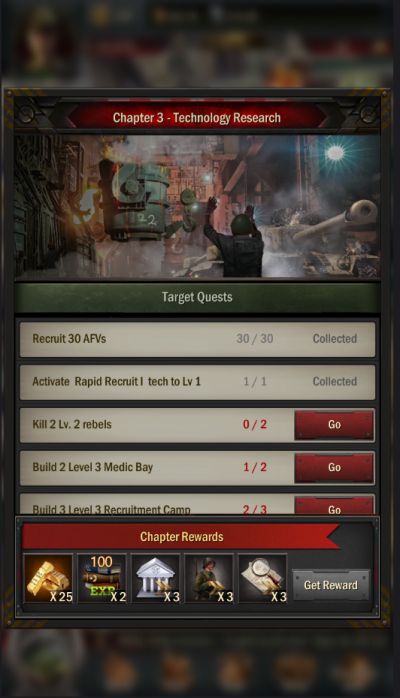 Keep in mind that the highest level your buildings can reach is based on your Command Center’s level, which is also the structure that takes the longest to upgrade, this information is useful when planning how to advance your base. Building isn’t all there is to achieve success though; you will also need to Research new technologies; you can do so in the Tech center.

Also, keep an eye on your Arms Factory, a building in which you can manufacture gear for your Commander, each piece of gear gives your units a boost, for example, a level 10 Leather Jacket boosts your Artillery and Tank armor by 2.8%.When everything is busy in your base, you still can do more by sending out your troops outside.

You can send your troops to nearby Farms, Smelters, Refineries or Power Plants to collect their respective resources. But be careful, because it means your troops won’t be able to defend your base in the meantime, as they will be occupied with your mission.

You can also check what your neighbors are up to on this screen, just tap on a base and you will be able to check the owner’s information, or Scout them to see how powerful they are, send them your troops to help them defend themselves from an enemy attack, or Attack them. The last thing you can do on this map is attacking the Rebels. Rebels are neutral units that give you various rewards upon defeating them, such as Experience, or crates with Resources or Materials to build Equipment.

At the start of the game your biggest challenge will be to make sure your base is capable of producing enough resources to keep upgrading your structures, and recruiting additional troops. Aside from upgrading your Farms and Steel Factories, you can also spend points you earn by leveling up your Commander.

You can check your Commander level, and if you have points to spend in the “Character Info” tab, from this screen all you have to do is tap on the “Commander Skills” button, and you will be able to see two trees: War and Development. 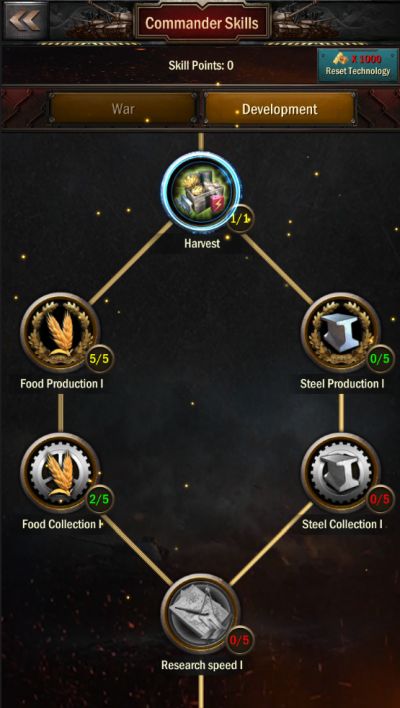 War improves various aspects related to your Army, from the speed at which you can recruit new troops, to the Attack values of the various units, to their Marching Speed. You are better off not spending any point on this tree until you are ready to actively wager war against bigger enemies.

At the beginning, you should focus on boosting your Development skills, as they will make sure you progress through the stages of building up your base much faster. The faster you produce resources, the more troops you can recruit, which in turn can be sent around the map to collect additional resources. You can also recover from losses much quicker this way.

3. Keep In Mind That Every Unit Is Different

In World on Fire you can unlock additional units by leveling up your Barracks. You get a new tier when your barracks reach level 4, and then a new one every 3 levels, up to level 30. Every unit has a special trait you can check in the Recruit screen, by selecting a unit you have already unlocked and tapping on the icon on the top right of the screen, right below the Artillery button. 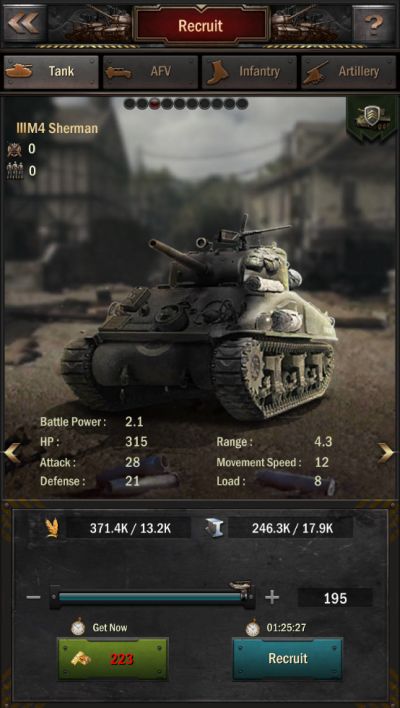 Some units deal more damage to specific other units, for example the level 2 infantry units, the Stormtroopers, deal bonus damage to Tanks. Other units take less damage from specific enemy units, the level 2 tanks, the SU-85, take less damage from enemy Artillery units. Other units are stronger when attacking, or stronger when they defend your base or an ally’s. This is why you need to diversify your army as much as possible, to make sure you have answers to anything your enemies might throw at you.

There are a lot of units, and it’s hard to tell which ones are more powerful than others on average, luckily, the game gives us a hint of how powerful each unit is. To check this information, you can either select your Barracks, then Details, and then tap on the More Info button, you will see what unit you can get at each level, and their Battle Power per unit trained, or simply visit the Recruit screen, and see each unit’s Battle Power value together with their other stats.

4. Join Other Players In An Army

Armies are the Guilds of the game, a collective of players who help each other to conquer their region. The biggest benefit of joining an Army is that you can request for help to upgrade your buildings, or you can send help to your allies, the amount of time you can do this is based on your Embassy’s level.

Another benefit of being part of an Army, is that you can send or receive help with fights. As a lone wolf, it’s very hard to succeed in this game, since you might get attacked by multiple people, in that case, having access to your allies’ troops can make the difference between winning and losing your base. 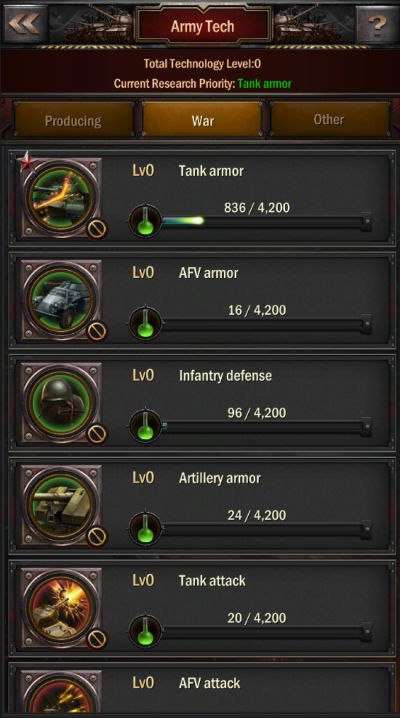 Armies also have access to special buildings that give special benefits to all members of the guild, but someone in the guild has to build them to access their benefits. You can check these buildings and their effects in the Army screen, under the Army Buildings section. Be careful, if a building is destroyed or removed, you will have to wait for a cooldown period before being able to build it again, so make sure your guild buildings stay in top shape.

Armies also have their own technology tree. You can donate points to various Army technologies, whenever you donate, you earn Army Honor, which you can spend in the Army store to purchase goodies. When a technology gets enough points donated, it will be automatically upgraded, every member of the guild will benefit from the effects of the technology, and the donations for the next level of the technology will be unlocked.

Army technologies are divided into 3 categories: Producing, which improve resources’ production, War, which improves troops’ combat abilities, and Other, boosts that improve various aspects of the Army itself, like the maximum amount of members, increase the number of Flags an army can have, how much time is deducted when you Help allies building, and other boosts.

Lastly, armies have access to a special mode called Ultra Mecha Invasion, up to 5 Army members can join the battle, which involves fighting rebels who bring a special technology called Ultra Weapons to the battlefield. Defeating these rebels will grand supply crates with the materials to create Ultra Weapons for yourself.

5. Learn What Each Building Does

There are a lot of buildings on your base, and you want to make sure you know where each one is positioned, and what each one does. The most important building is the Command Center; every other building’s maximum level depends on your Command Center’s current level. It’s also the building that takes the longest to upgrade.

The Fortress is also very important, as its level is a requisite to upgrade the Command Center, and it makes your base sturdier.

Then you have the Tech Center, where you can research new technology, the Battlefield, whose level influences the maximum number of troops you can have.
Barracks are where you train your troops, the highest the barracks’ level, the strongest the type of troops you will be able to train. 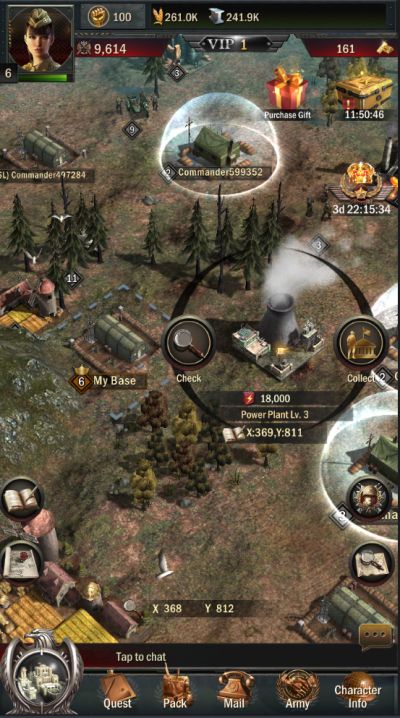 The Hospital lets you heal your wounded troops, Tanks included, in exchange for resources.

The Destroyer is a special mecha that helps you combat enemies, it costs Energy to send it out, and it can not collect resources. It has various abilities, that you unlock by advancing it.
The Cargo is a special building that gives you random rewards every now and then, ranging from random Speed Ups, to Commander Experience.

Next to the Command Center we can find the Arms Factory, where you can manufacture equipment for your commander, which in turn boosts your troops.

The Depot is another very important building, as it allows you to protect your resources stored in Base from being plundered. The highest its level the highest the amount of resources you can protect.

There you have it! This ends our World on Fire beginner’s guide. Stay tuned, as we may come back with some advanced tips and tricks for the game in the nearest future! Meanwhile, if you know additional tips or strategies, that we should include in this guide, feel free to drop us a line in the comments!

How do build another command centre to use as a farm?

Don't send AFV on attack. These are defensive units and also have excellent load bearing capacity. They are also invaluable in defense of your base but virtually worthless for attack.