War Eternal is a brand new strategy mobile game developed by Onemt Limited, a company that’s responsible for strategy titles such as Revenge of the Sultans and The Great Ottomans to name a few. The goal of the game is to build up your own city and turn it into a prosperous empire with the help of your heroes and your allies. You will be constantly expanding your base, adding new buildings, and upgrading the ones you currently have, summoning new heroes and training more troops to defend yourself and attack others. With three civilizations to choose from, a captivating art style, a lot of heroes from history and the ancient legends, and the PVP experience, you will have plenty of things to do when you play this game. Here are a couple of Water Eternal tips, cheats and strategies to assemble powerful armies and crush your enemies!

1. Learn How The Heroes Work

Heroes are the main thing that differentiates this game from other base building strategy games. Every hero has different special abilities, skills, and commands specific types of troops. For example, Augustus will guide cavalry in battle, Agamemnon will guide infantry, Euclid will guide archers, and Cincinnatus will guide siege units. You can check which unit they command by checking them out in the Heroes screen. You can summon them at the Thermae (or its equivalent in the other civilizations), you get one free summoning every day, and extra summons for completing quests. 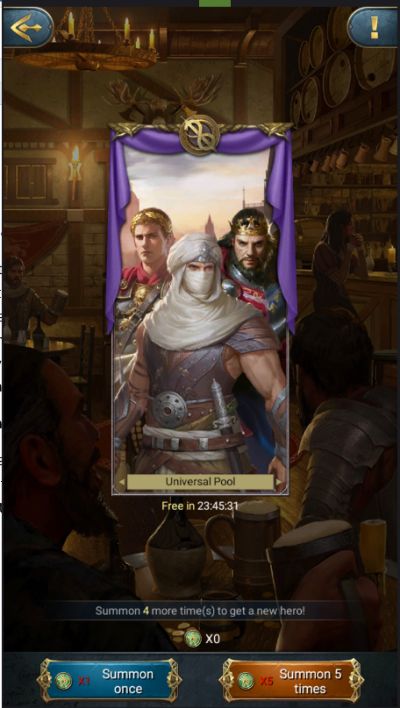 You always get a full hero every 5 summons, the other times, there’s a chance you will only get some shards of a random hero, you need 30 shards of a hero to summon it. Multiple copies of the same hero can be fused together to raise the hero’s Expertise, which increases the level of their special skills. A full hero counts as 30 shards, so if you need 50 shards to upgrade a hero’s expertise from 2 to 3, you will need a full copy of the hero and 20 shards. Or just 50 shards, if you haven’t used them.

Heroes can also be upgraded, which is done by consuming tomes that grant them experience points, you can earn additional tomes by completing the various quests the game has to offer. Heroes unlock additional skills at level 30 and 60. 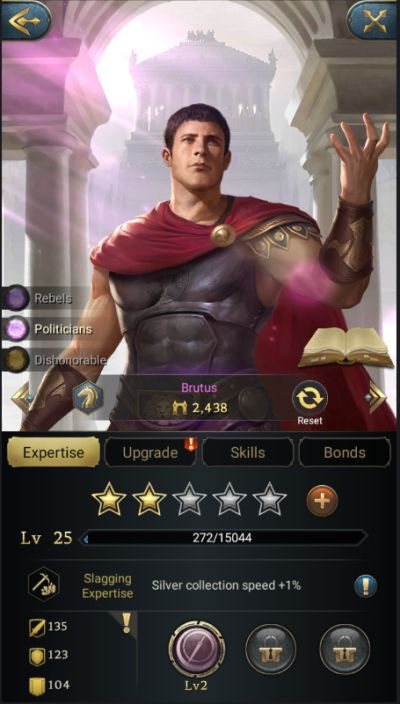 You can check out what the hero’s skills do under the skills section, bear in mind that skills are used automatically in battles, so make sure to always pick the most relevant ones to your current formation, for example Agamemnon’s troops should be placed on the front, as his first skill boosts the defense of all troops on the same row, making your frontline better at taking hits.

Bonds give heroes additional buffs if you own other heroes that can form a bond with them. An example of a bond would be “Generals” bond that Augustus gets if you also own Agamemnon and Trajan. Every hero has different bonds, so make sure to check them out.

Time is the most important resource in this game: you will need plenty of time to upgrade your building, train new troops, and research new technologies. You can spend gold to accelerate the process, or specific consumables, but these are a very limited resource that you should use sparingly.

The first building you should always upgrade is your palace, the core of your empire, since your other buildings’ level can only go as high as your palace’s. Keep upgrading your walls to defend yourself, keep improving your barracks, stables, and siege in order to build higher levels troops which are much stronger, upgrade the Academy to research higher level technologies faster, upgrade the Embassy, to help your allies faster, and so on. 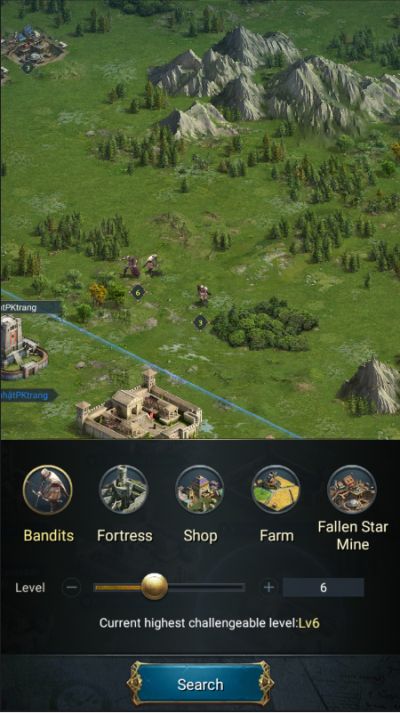 You can only have up to two upgrades going on at the same time, and only 1 technologic research, so make sure you keep your workers and researches busy all the time!
Keep training new troops as well, it costs resources, but there is a limit to the amount of resources you can store in your Granary anyway, and it’s better to spend them than having them plundered by your enemies.

Another reason to keep building all the time, is that every time you start upgrading a building or researching new technologies, you automatically send a request for help to all of your allies, which in turn means they earn more Contribution Points, an important resource in the economy of your Order.

Your troops, much like your builders, should never be left on idle. There’s plenty to do on the world map: defeat bandits, assault fortresses, collect extra resources from neutral farms or fallen star mines, all of these will grant you additional resources. Be careful though, when your troops are outside of your city, you won’t be able to defend it from your enemies, or from the rebels that will try to breach in.

By default, you start as an Empire of the Aegean, the old Roman Empire. But you get two Passports rather early in the game, a Passport allows you to switch civilization for free. In order to switch Civilization, simply tap on your Palace and then select the Civilization icon, you will be able to read a quick overview of each civilization, and pick one to switch to.

Every civilization has access to specific units, with their own skills. The technologies are also different, the basic ones such as march speed and infantry damage remain the same, but there are some that are specific to each civilization: the Aegeans have higher resource production and infantry training speed, the Kingdoms of the Middle Ages train archers faster and their hospital can keep more wounded soldiers in them at once, while the Kingdoms of the Fertile Crescent collect all resources faster, produce more Silver, and train siege units faster. 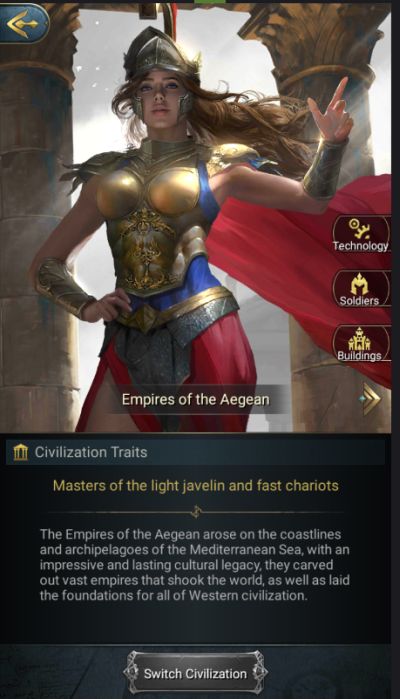 You should base your choice mostly on your favorite type of unit you want to train, so pick the Aegeans if you like Infantry the most, go for the Middle Ages if you like Archers the most, and the Fertile Crescent if Siege units are more your speed. There’s also a 4th civilization that is currently locked, and that the dev team is still working on, so, if you are unsure on what to pick, just hold onto your passports for a bit until it gets revealed, so you will be able to make a more informed choice.

4. The Field Of Mars

The second most important building after your Palace is the Field of Mars. Upgrading this building allows your heroes to bring more troops to a fight, which makes your army much more powerful.

You can also create various types of army in the Field, this way you can easily select which one is the more apt at fighting certain armies. For example, you might want to prepare armies with siege units when you plan to siege buildings, but won’t necessarily need them when you are just dealing with regular bandits. 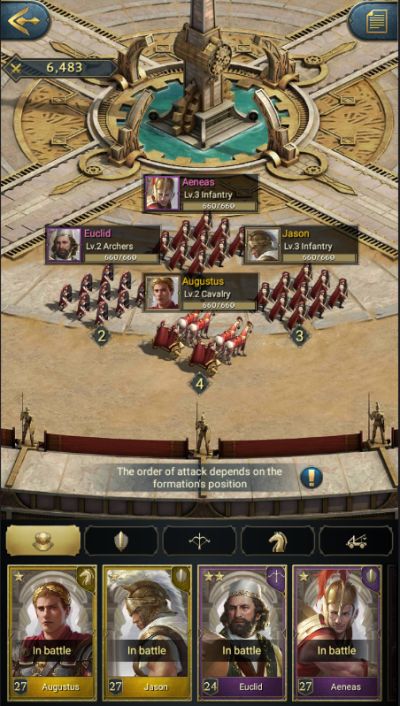 Remember that the attack and skill usage order depend on the troops’ position, another factor to consider when selecting where to place them, you can also check how powerful each army is in this screen. Lastly, every unit has an ability, for example, the Gallic Cavalry, the level 2 unit you can train at the Stables for the Aegean Empire, boosts the Armor and Health Points of all allied soldiers in battle by 10%.

Another important function of the Field of Mars is the Parade, where you can upgrade your troops if you are able to. You unlock higher level troops from level 6 of their respective building, and then every 3 levels. You will need your Barracks to be level 9 if you want to train the Germanic Auxiliary, the level 3 infantry. If you have already trained Macedonian Auxiliary you can upgrade them to Germanic Auxiliary if your Barracks reach level 9.

Don’t worry, there will be an icon on top of the Field to notify you that you can upgrade your units.

5. Join An Active Order And Reap Its Benefits

You should join an Order as soon as possible, since its benefits are huge. As we already said multiple times, time is the most important resource in the game, and the Order lets you accelerate the process of building and researching so much, that it’s vital you are in one.

The first thing to do after you joined an Order is to relocate close to its stronghold, the game gives you a free item that allows you to move your entire base, just use it and enjoy the vicinity of your mates. This makes helping them or getting help much faster.

Every time someone in the Order starts a new building or a new research, everyone will get a notification, tapping on it will allow you to help your mate, cutting down some time from the wait. How much time your help is worth is based on your Embassy’s level. 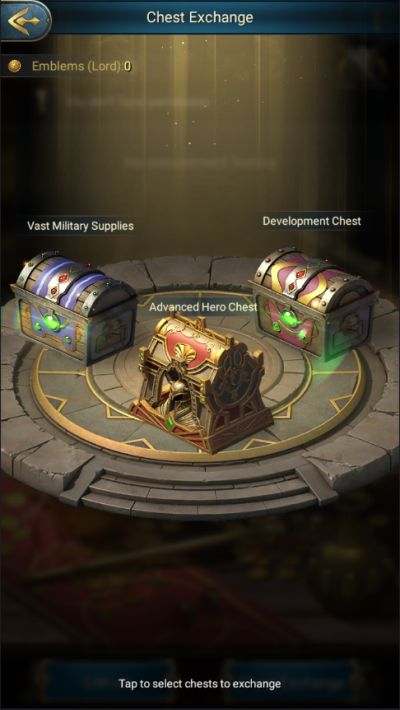 Every day, you can contribute 50.000 Silver coins, this will earn you 80 Contribution Points, which you can use to purchase goods from the Order store, you can buy Hero shards, troops skills fragments, or extra bonuses such as the 12-hour Aegis, a consumable that makes you impossible to scout or attack for 12 hours.

Orders have access to additional modes and events, for example the Battle of the Bastions and the City Siege. When these events end, orders that occupy cities of the Bastion of the Dawn will receive emblems as a prize, which can then used in the Order’s Treasury to get amazing rewards.

Another currency that concerns Orders is Order Funds, which can be earned through contribution and events. Oder members can spend these funds to unlock extra Technologies that are exclusive to the Order, you can check these technologies by tapping on the Technology icon in the Order’s main screen. These technologies help your allies, so every member of the Order needs to be selfless to make all of the Order more powerful. It is more beneficial to spend your hard-earned currency to help your mates than to hoard it for yourself, if you are selfless, your teammates will also be selfless, making everyone stronger.

In the Hall of War, you can see what other Orders are your declared enemies. Here you can join your allies in attacking your target, or check the War History to see how the last battles went. Also, the Order might stipulate pacts of non-aggression with other orders, so be careful before you attack or scout someone, as they might be under the pact, which risks ruining the pact.

An active Order is fundamental to achieving success, as you will need your allies to help you, and you to help them, in order to prosper and earn contribution points and order points, which you can use to become much more powerful.

This wraps up our beginner’s guide for War Eternal. The heroes add a layer of strategy to a genre that was feeling a little stagnating, and the amazing art style of the game is going to keep your eyes glued to the screen, waiting for your buildings to upgrade. All you have to do is login periodically, and fill up your queue as much as possible, so even if you have little time to play the game, you can still progress nicely. Make sure to let us know in the comments if you have found any other tips or tricks for the game. Until then, happy warring!

How do I get to the same realm as my husband? I know I only have 24 hours to do it but I’m not seeing how to do it.