TrainStation 2: Rail Strategy & Transport Tycoon is a world-building simulator where you manage different types of trains and conductors in order to build functional railroads around the world. As with all mobile building simulator games, the progression you make towards achieving your goal will depend on the time constraints each action gives you.

Unlike in real life where it takes months and years to build a functional railroad system, it will only take you a few hours in TrainStation 2 to finish your first railroad system.

This is an excellent railroad simulator game from Pixel Federation Games, that you can play even if you just want casually build an empire without dipping too much of your time into it. It’s a game that allows you to reap your rewards even after not playing it for some time. You can just set your actions and forget about it, and return to it later on with some juicy rewards.

For a game that is built around time constraints, most of TrainStation 2 revolves around optimization and finding ways to lessen the amount of time we do between actions.

TrainStation 2 is a fun building simulator which, instead of building a city, you create a functional railway system. Since, the game gives little information as to how to optimally play it, we’re here to help you with a bunch of tips and tricks in order for you to progress faster. So, sit tight and let’s build an empire of chugga chugga choo choos!

1. Trains And Parts: What’s A Railway System Without Trains?

TrainStation 2 is all about collecting materials from harvesting spots and then processing or delivering them. All of these won’t be possible if we don’t have the proper trains to do the job for us. 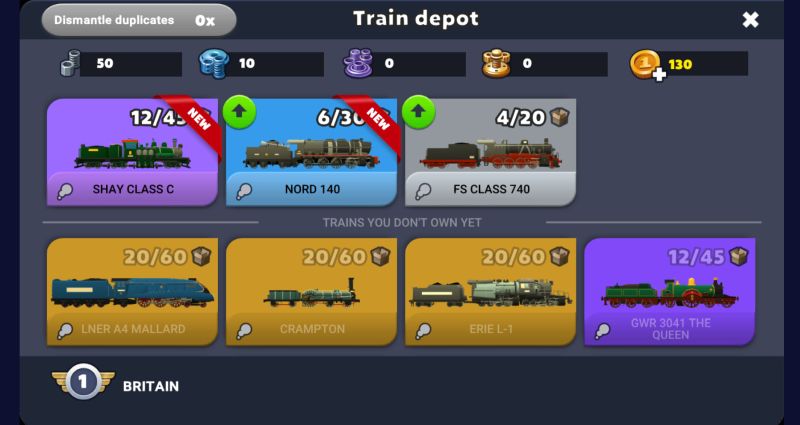 Parts and gold are the currencies used to upgrade trains. Gold is easily harvested by sending your trains to towns – acquired gold is measured by the cargo your train can carry multiplied to a multiplier that is dependent on the town the train goes to.

Meanwhile, there are multiple ways of getting parts. One way of acquiring parts is to recycle duplicate trains, giving you parts corresponding to that train’s type — allowing you to use those parts to upgrade trains of the same type. Another way is to open boxes bought using gems. Collecting parts is an important aspect of the game.

2. Test Your Luck With Gacha Containers

Trains are mainly acquired via containers which can be purchased with either gems or keys. Keys are easily acquired by finishing delivery quests strewn all over the game. Gems, on the other hand, can only be obtained by finishing achievements. 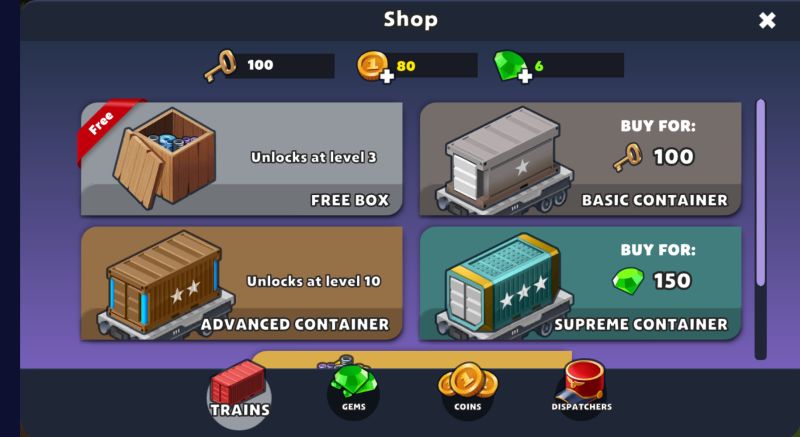 What’s a mobile game without some gacha elements?

Each container shows the rate of acquisition on each type of train. While it is not really that bad to acquire common trains since they are easily upgradeable, it is advisable to actually try to keep resetting the game until you get at least one legendary train from your initial pulls. Some deliveries can only be completed using legendary trains, and you don’t want to miss out on those.

Try to save your keys! Once you get four trains, it would be best to stop opening train containers for the time being. The number of trains that can remain operational depends on the number of dispatchers you have. It would do you no good to have a large quantity of trains yet only have a few dispatchers to operate them. That means unutilized assets – and it has no place in a tycoon’s world!

The dispatchers make everything happen for you. Your trains would just be covered in dust and rust if it weren’t for these guys. The number of trains that can make their rounds along your tracks is directly proportional to the number of dispatchers you have.

The game would start you off with just three dispatchers, limiting the amount of movement you can do. It is actually worth it to invest in Harry to carry you through your first hour of playing. Harry, while he goes away after an hour, will help you get more resources to help you easily finish early delivery quests. You will just need to sit through a thirty second ad to get him onboard. 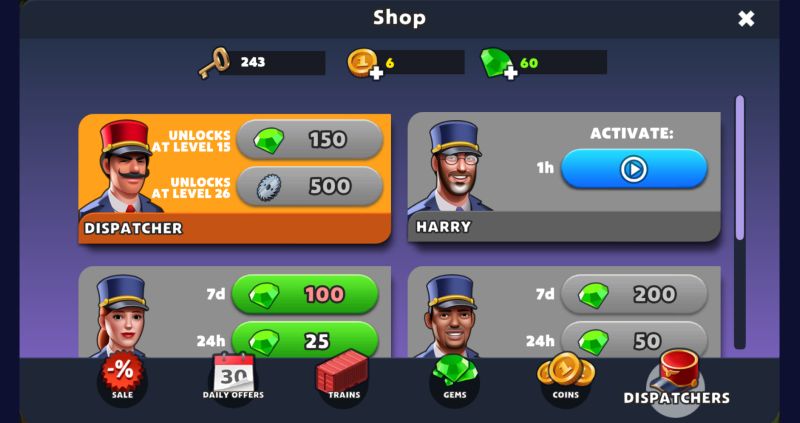 Most dispatchers are fleeting, one option gives you permanent ones.

One of our main early game boosts is to acquire the help of a permanent dispatcher. The dispatcher (the one highlighted in yellow) is the most worthwhile investment. The first one will either cost you around a hundred gems or four hundred steel pieces. It actually takes some time to get that amount of steel, taking into consideration that forty pieces require five minutes to process.

The total amount of resources you need to make four hundred steel pieces is one hundred pieces of iron ore and three hundred pieces of coal. On top of that, you also have to wait for about fifty minutes while you smelt them – this doesn’t even include the harvest time for each resource yet.

It might take some time, literally, to obtain the requisite materials – but it will all be worth it. This will allow you to have four functional trains doing their rounds collecting and delivering materials.

4. Locomotives Have To Have Their Upgrades: Where To Spend Your Parts 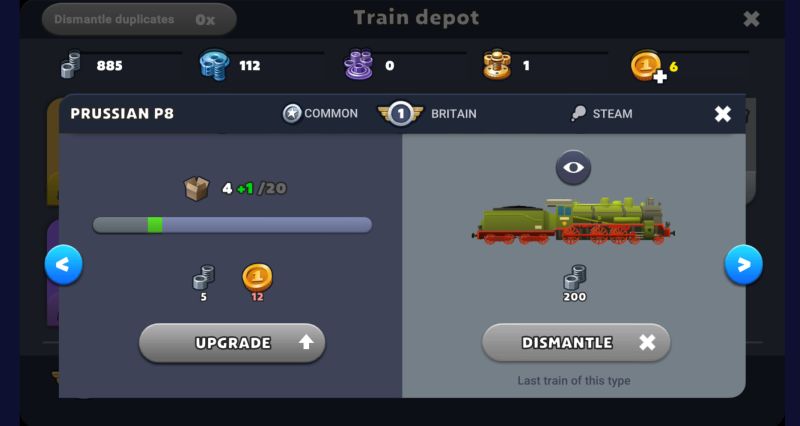 Are commons even worth it?

This will allow you to finish delivery quests that have no train type restrictions easier. Remember that the less trains you need to finish a delivery, the more trains that are free to do other deliveries or used to harvest materials.

Don’t be scared to dismantle duplicates! Remember, you need a lot of parts to use for your trains, and you can get them cheaply by dismantling your #2’s.

5. Train Station: A Place To Build, Rest And Manufacture

The train station is where a lot of the nitty gritty of the management part of the business happens. It is used for different functionalities that will aid you in your quest to becoming a train tycoon.

The lower part of the train station is used for obtaining advanced materials. These materials are obtained via smelting together different base materials (e.g. Forty pieces of steel requires ten pieces of iron ore and thirty pieces of coal) with a given timer for each smelt. 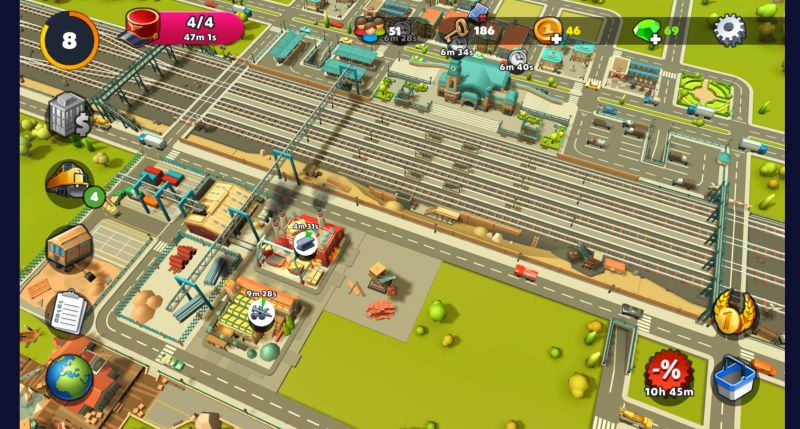 The middle part of the train station is used for acquiring harvests from arriving trains. Albeit using this method to acquire your harvested materials is optional, it is actually recommended to visit the station once in a while since there are sometimes whistles strewn about the middle area. These whistles may be clicked to get different items, including keys, upgrade materials, and harvested materials.

The upper part of the train station is used for housing. Housing, although with small importance in the early game, allows you to increase your total population. Population is indicated by the icon with three people. Population dictates how freely you can upgrade your warehouse – the place where you store your materials. The first warehouse upgrade becomes available at the get go due to it only requiring forty people.

Now that we’re done talking about the basic functionalities, let’s dive right into the first country. You will initially be thrown into Britain and are tasked to make a functional railway system for the people.

At first, you will only be asked to deliver iron ore and coal to different parts of Britain. These initial tasks only take about thirty seconds to complete. While it is okay to just try and deliver them using our trains, we’re trying to optimize the time we spend for each delivery mission. 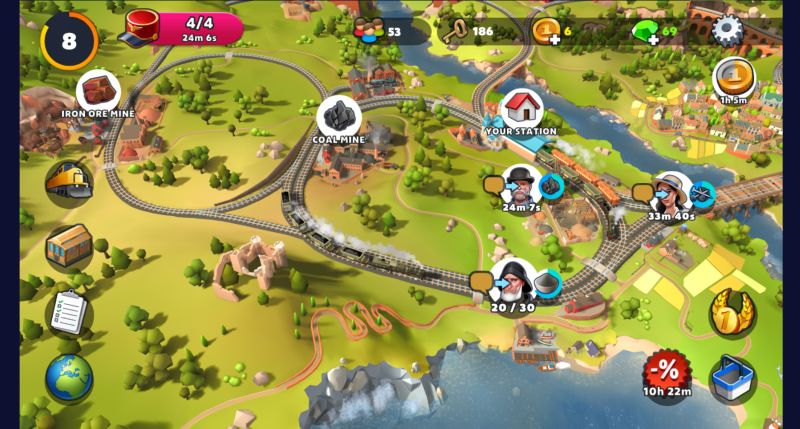 Time to supply the demands of our people.

It’s best to make sure that you already have all the necessary materials to be delivered before you even start to make deliveries. Focus on putting your trains on the harvesting grounds first– the iron ore mine and the coal mine.

Take in mind that we would like to use as few trains as possible in finishing our delivery quests, so best to send in our highly upgraded common trains to finish our tasks for us. This will optimize the amount of time we spend on a task while the rest of our trains can finish other work for us. Other trains can also be used to continue harvesting our much-needed iron ore and coal.

7. Achievements: We All Gotta Start Somewhere

Gems work like time machines – they can be used to fast-forward tasks in the game. Although this is not the optimal way of using your gems, you can still do it if you really want to finish that one quest that has been bugging you for some time. 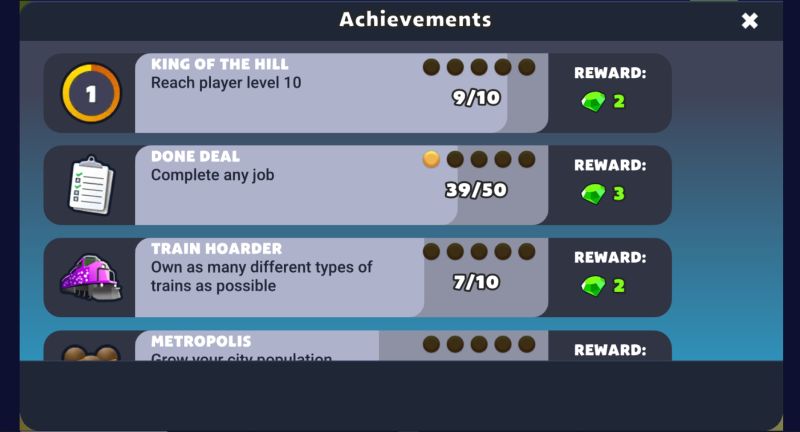 Achievement Gallery: the one stop shop to earning those precious gems.

Gems are mainly acquired by unlocking achievements: obtained via finishing enough quests and completing upgrades. These get completed as you progress through the game. Think of it as the game rewarding you with goodies for playing the game longer and more often. The more effort you put into the game, the more gems the game will reward you with.

TrainStation 2 has 9 countries for you to unlock and build a successful train business in. Each region will task you with harvesting and delivering materials. Spending an ample amount of time in Britain will teach you the ropes that you will just have to redo with each and every region.

The level locks on each region increases as you progress, so you will end up spending more and more time with each region. The only way to gain levels is by finishing delivery quests and the amount of experience you gain is highly dependent on the region you are currently in. 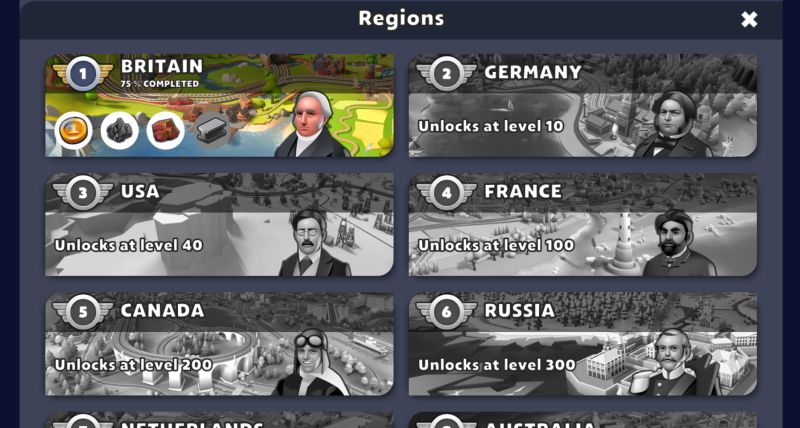 Currently the game has 9 countries to build through, each locked with a level wall.

There is really no need to rush each region, but the faster you get to the next level, the more things you can do. That is why we have this guide for optimization. While there are many play styles that one can use in playing TrainStation 2, this guide features ways to optimize your movement and investments in order to minimize the waiting time you use in between actions.

Another way to boost your early game, although not really needed, is to purchase the starter pack which will give you a guaranteed twenty-five cargo capacity container: a big boost at the infancy period of your humble business.

Overall, TrainStation 2 is a nice game to pour your extra hours into and requires not much commitment to play. It’s a fun way to chill and relax while watching your trains go round and round. It’s up to you now on the pace you want to build your worldwide railroad empire.

And this wraps up our beginner’s guide for TrainStation 2. If you have come across additional helpful tips, then please let us know in the comment area below!

Can anyone explain what the colors of the city plans represent? I've never understood the difference between the blue, yellow and red plans. I'm sure they mean something. I'm just not sure what.

How can I get a “legendary train” into Germany To help Emily clear the avalanche?

@William, I‘m stuck on that too.

What is meant by resetting the game. At Level 16, still no Legendary train.....

The guide above says keep resetting the game hoping to get a legendary train, how is this done?