Trailer Park Boys: Greasy Money is a new iOS and Android title from East Side Games that’s based on the long-running Canadian series Trailer Park Boys, and it’s your chance to join Bubbles, Ricky, Julian, and the rest of the cast as you run Sunnyvale in an idle clicker setting. You can upgrade your businesses, hire characters to run the businesses while you’re away from the game, unlock trunks by completing challenges, and open those trunks, which may include “collectible cards, liquor, hash, and cash.” And like many other idle clickers do, there are boss fights in here, where your tapping speed and stamina will be put to the test. And what would an idle clicker be if you didn’t have any option to prestige, or restart your game?

As many have observed, this game tends to have a slower pace than the average idle clicker, though that may also mean more time for you to build up that (illegal) business of yours and earn more money. And while idle clickers may seem like a walk in the park, a lot of the higher-profile games in this genre have tons of things for new and even more experienced players to learn. Let’s go over all these things in detail as we now bring you our Trailer Park Boys: Greasy Money strategy guide.

1. Getting Started – Things To Know From The Beginning

We could start out by going the very obvious route and saying this is a game where you wouldn’t be actively tapping for long. But since you probably know that, let’s move on to some other basics of the game you should be aware of from the start. 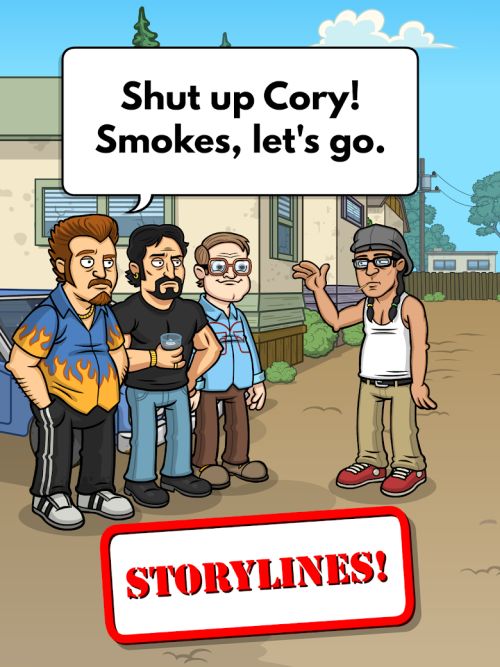 First off, Trailer Park Boys: Greasy Money is divided into multiple seasons, which you have to complete by fulfilling the listed tasks per season. Completing a season will take you to the boss fight, and after you win it, you’ll be sent to jail, which isn’t the bad thing you might think it is. When completing the first few seasons, the game will be the one giving you the tips in real-time, as you perform the different actions. Take note of these tips and do what the game tells you to do.

You can restart, or prestige once you’ve reached a certain point in the game, and as a brief recap of what this idle clicker staple means, prestiging is restarting your game and progress, but with a little extra to help you progress faster in your next go-around. In this game, you lose all progress on your businesses, but you get to keep your upgrades.

2. Customer Bonus Items – Why Should You Collect Them?

Your customer gauge will fill up each time your businesses attract new customers. And when the green bar fills up, that means the business will generate more money for a certain amount of time. That also means you’ll get some bonus items, such as liquor, new character cards, business cards, etc. – in short, free stuff to help you make faster progress.

Typically, you’ll get about three to four bonus items per business. But you might not get any more bonus items from a business – this happens when your customer gauge is all filled up but it doesn’t reset. This is only for the season in question, so make sure you collect all customer bonus items before moving on to the next season.

3. How To Progress Onward In A Season 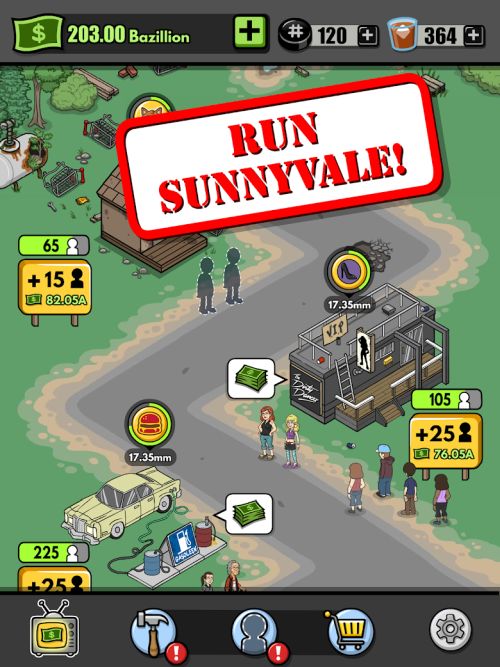 While we’re still on the topic of beginner tips, we should tell you how to move forward in the game’s seasons. Simply put, the season will progress onward once you complete one of the challenges – these challenges can be found at the top portion of the screen. Challenges may include, but not be limited to getting more customers or earning more liquor – they’re usually easy tasks that can be completed organically, or during the course of playing the game. Make sure you complete the challenges so you could keep moving forward and move closer toward season completion.

4. Don’t Spend Your Liquor Too Quickly

Liquor is one of the game’s currencies, as you may have observed. And you can use this currency to buy new character and business cards in the in-game store. You typically won’t be charged too much liquor to buy these things, but it still isn’t worth the purchase at the end of the day, unless you need just one more card to make it to the next upgrade threshold. Why pay when you can get those cards for free?

Instead of spending your liquor just because you’ve got some, save it up instead. You’ll typically get a good number of cards anyway from the random trunks we mentioned a couple of tips ago. And that liquor’s going to come in handy once you progress onward to certain upgrade thresholds!

5. Be Hands-On With The Businesses 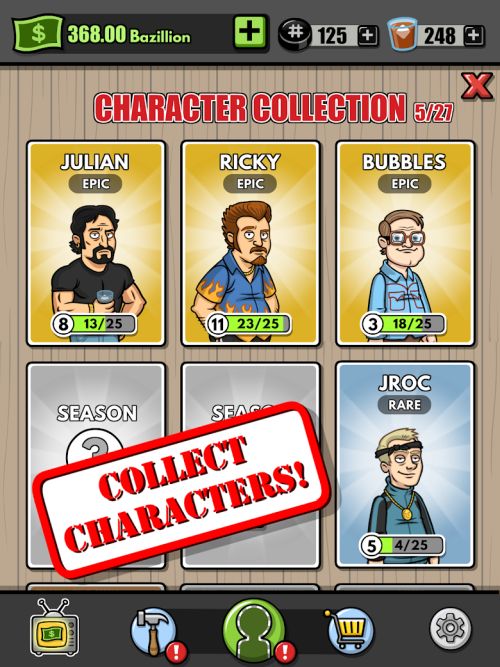 Although you don’t really have to do a lot of tapping once things are automated (we’ll get to that in a bit), you should regularly be checking which businesses have their customer gauges close to filling up. Focus on those business and optimize the way you run your business – what you’re doing here is trying to ensure you’re not spending any cash on goals that take quite a while to complete.

Automating your businesses means idling away – if a business is automated, you won’t have to do all that tapping to collect the money you earn. And you can leave the game for several hours on end (maybe not too long, so you can take care of other things in the game) and come back with a ton of money to collect. Trailer Park Boys: Greasy Money wants you to reach a point here you can sit back, relax, and let most of the game play itself out for you, so make it your priority to automate things ASAP!

7. Should You Spend Hash Coins On Liquor?

This is a good question, and one you’ll have to ask yourself at several given points in the game. But when it comes to spending those hash coins – your premium currency – many believe your best bet is to spend them on liquor. Just how is this a better option compared to the others?

Consider the fact that the Legendary Trunk costs 450 hash coins – with that trunk, you can get a maximum of 40 cards and 580 liquor, with the possibility of getting super-rare character and business cards. The Gold Trunk, on the other hand, comes with 28 cards and 260 liquor, and you’ll only get rare cards at best – it’s good, but not as good as what comes inside the Legendary Trunk. That’s all well and good, but the liquor prices give you more value for money. 50 hash coins will get you 250 liquor,180 coins will get you 1,000 liquor, and 500 coins will get you a whopping 3,000 liquor.

As you can see, the value-for-money deals get better as you spend more hash coins, and we should also remind you of what we said earlier. If you’re completing your season tasks, you should get free cards anyway, may they be character or business cards, but you won’t get as much liquor. So with that in mind, we do agree with what others are advising – if you want to spend your hash coins on something worthwhile, spend ‘em on liquor packages.

Although renovating your businesses will give you a permanent increase to the amount of money generated by the business, it’s not as cut-and-dry when you’re upgrading characters. Some characters will improve a business’ ability to generate cash, others will help you in boss fights by improving your attack power, and you’ve also got to consider those characters whom you’ve got assigned to auto-collect – upgrading them will allow them to upgrade more businesses at the same time. 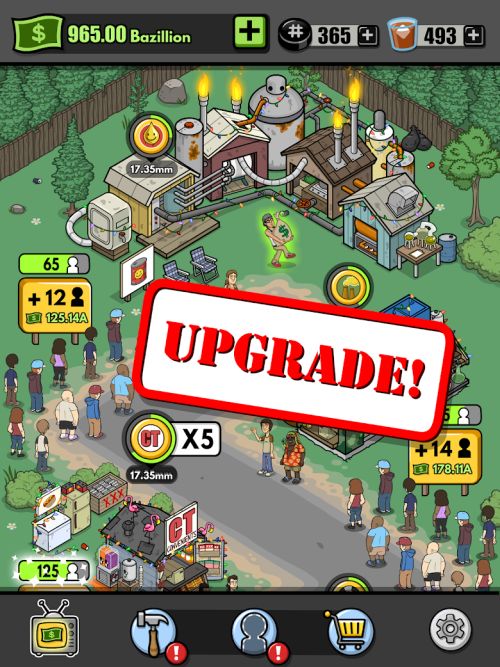 Both these upgrades will cost you a good amount of liquor, which makes the above tip even more important, as well as distributing your liquor expenses the right way. We would personally recommend spending more on upgrading your characters, as they can do so many things, depending on their specialization.

Want to earn even more money in Trailer Park Boys: Greasy Money? Then watch the ad videos once the game asks you to if you want to view the clips. That’s going to double the cash you’re due to collect, and all it’s going to take is 30 seconds tops for the videos to be completed. Loading is another story depending on your connection speed, but then again, that’s usually quick as well! Watch those videos if you’re trying to improve your earnings ASAP.

10. Take Part In The Special Events

Last, but not the least, the game will always notify you if there’s a special event for you to take part in. These are mostly tapping events, and while that may sound contradictory to the idea of idle clicking, take note that these are quick, limited-time events – you’ll be better for it anyway once you collect the freebies you can get for performing well. 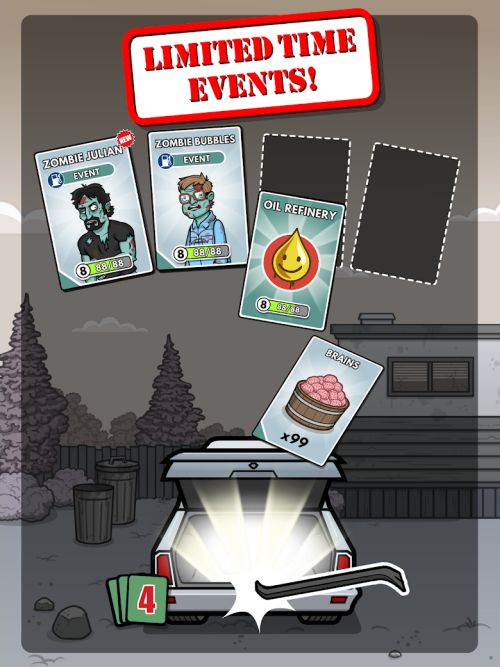 We hope you’ve enjoyed our detailed strategy guide for Trailer Park Boys: Greasy Money. Do you know more tips or tricks for the game? Or just want to share your thoughts about the game? Feel free to drop us a line in the comment section below!

Point 1 is incorrect. You don't always want to "take note of these tips and do what the game tells you to do." Often it will lead you astray from the optimal strategy for success.

@DD, I agree. The only thing that actually helps is patience. Don’t complete a season without upgrading everyone to automatically collecting.

I didn’t and some season’s last for ever trying to upgrade that one person or business that makes the most money.

Hint. Save all your clocks for one event they give the best liquor and cards. Good luck. And never spend money.