The Last of Plague Survivor is a new zombie-themed survival mobile game developed by EasyTime. It is a rail shooter, which means you do not control how your character moves, instead you go into predetermined places, and shoot enemies from these places. Your objective is to kill all the zombies marching towards you, before they kill you. Your aim and swiftness of your hand will be tested in this game of reflexes and shooting. Stay with us and read on for some useful tips, cheats and strategies to survive the zombie apocalypse in The Last of Plague Survivor!

As with every respectable zombie shooter, headshots are present in The Last of Plague Survivor as well, and they are very important. They allow you to instantly kill zombies, which is already a great feat, especially if you consider the fact that ammos cost money in this game, so you have to use them sparsely. Yes, you have a huge surplus of cash if you aren’t buying anything else, but purchasing all the tools needed to defeat the hordes of zombies (weapons, grenades, medikits, weapon upgrades) will quickly see you run out of cash, so try to hit as many headshots as you can, so that you can spend your money on improving your equipment, rather than spending it on wasted bullets. You can headshot every zombie in the game, zombie dogs included. 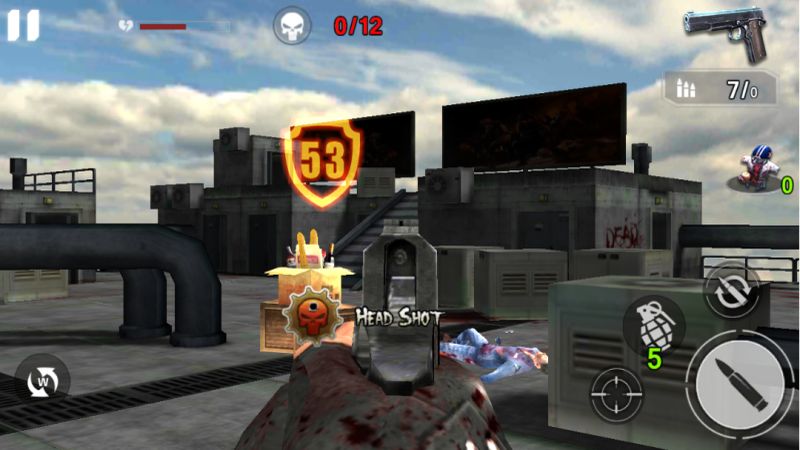 Another positive effect of hitting headshots is that its increased damage allows you to kill zombies quickier, which in turn allows you to avoid a lot of damage, if you are quick with your fingers. Sometimes you will have 5-6 zombies marching towards you, and you won’t realistically have enough time to kill them all before they reach you if you only hit body shots. Zombies reaching you is bad, as they hurt you, and we do not want that. The best way to get headshots is my using what is called “Aim Down Sight”, which makes you aim slower, but with more accuracy, and also zooms in the view. You can turn Aim Down Sight on and off by tapping the crosshair icon on the left of the shooting button.

2. Make Use Of All The Tools At Your Disposal

Shooting is fun, but it’s not always the most efficient way of dealing with zombies. Sometimes you will find yourself swamped in zombies, hardly a desirable prospect. Sometimes there’s just too many zombies, and shooting them isn’t enough to get rid of them.

So, what do you do? Toss a grenade at them. Grenades are an amazing tool at dealing with big groups of zombies. They blow up immediately when they hit a zombie, and kill all of them in an area around the explosion. So, when you see multiple zombies clumped up, it is time to unleash hell on them.

There are multiple types of grenades, but they all do the same thing: explode and kill zombies. Incendiary Grenades also burn the area around them making them very effective in chokepoints when multiple zombies are about to come, even though they are not quite in range of the explosion yet.

Another tool you need to use well is medikits. Since they are very expensive, unless you plan to spend most of your playtime watching ads, use them at the last possible moment, as they restore your health fully.

Decoys are another wonderful tool to help you fight the hordes of zombies, you get them by leveling up, or by buying them, and they keep zombies distracted for a good while. What’s great about decoys is that they will force zombies to clump up as they are distracted by them, making it easy for you to clear huge groups of zombies with a grenade.

3. Pick The Right Weapon For The Job

Different weapons are good in different scenarios. Every time you select a scenario the game will give you a recommendation on which weapon it thinks is best for your needs. Generally, it depends on the map itself. On more closed maps, with lots of choke points, automatic weapons with high fire rate like the MP5, the P90, or the AK47 perform way better, as you can fire multiple ammos in quick succession and get rid of the many zombies that plague said chokepoints, something a slow firing gun wouldn’t be able to do. 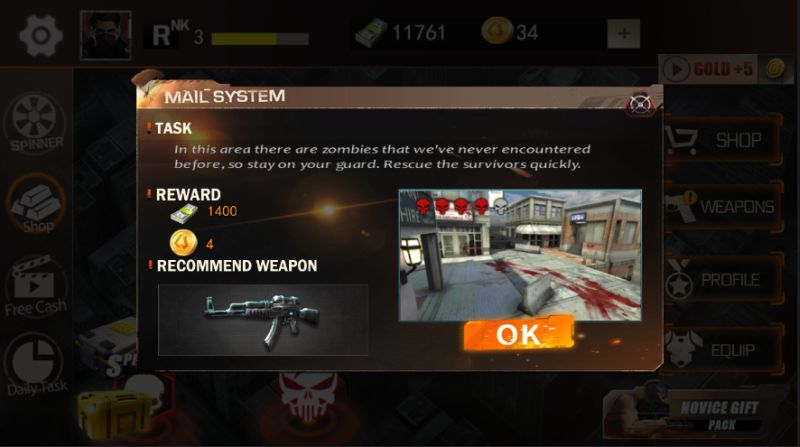 On the other hand, powerful, slow firing weapons such as the Dragunov or the Scoped Rifle are better on more open scenarios, where zombies could come 1 at a time from multiple directions, and from longer distances. Single fire weapons are way more accurate, so the shot will always end up where you’re aiming, we can’t really say the same for automatic weapons, as their recoil and general inaccuracy ends up costing you way too many ammos and health on open maps.

Lastly, we have melee weapons, quite odd for a game of this type, but they do have their uses. I like them a lot since my aim is godawful. Anyway, despite being melee, you can hit enemies that are a bit further away from you than their range might indicate, so make sure to experiment and see where you can reach with them. Melee weapons are excellent weapons to put in the second slot. The reason for this is that sometimes you need to reload but still need to take care of the last 1-2 zombies of the wave, so instead of reloading, switching to a melee weapon might make the difference between life and death. More generally, melee weapons are also very good against zombies that don’t come in groups, they also allow you to save up more money, since they don’t use ammos, meaning using them costs you nothing. And the Chainsaw is hilarious to use. You should try melee weapons out before thinking they are bad, they pair extremely well with automatic weapons, the reason being that automatic weapons’ ability to deal with groups of enemies in closed spaces is well complimented by melee weapons’ unmatched ability to deal with one enemy at a time. 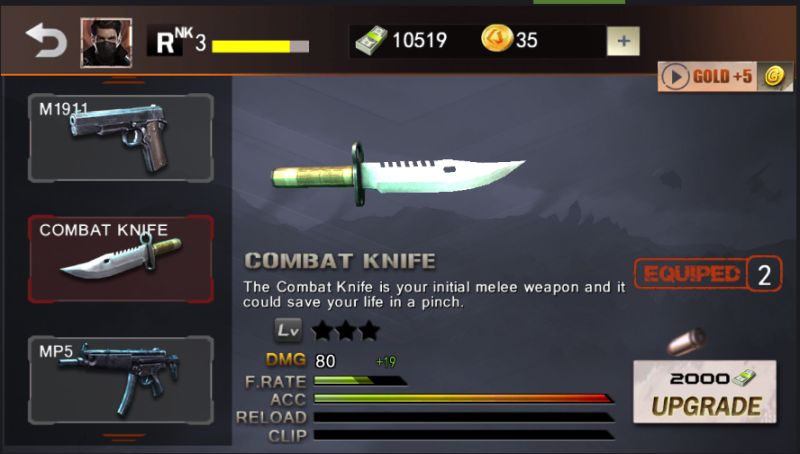 Weapons can be upgraded with money, which improves everything about the weapon. You can check beforehand what actually gets improved, just check the transparent bars below the weapon, that’s what is going to get improved by upgrading them. Plus, the damage boost they get from the upgrade. Upgrading weapons is the best way to keep up with the increasingly difficult levels
Be careful, the stronger your weapon is generally speaking, the more its bullets will cost. Automatic weapon’s ammos cost less than their equivalent of a single fire weapon, since you will use many more of them. Money is a scarce resource in this game, you can’t expect to keep upgrading weapons and purchasing bullets for all of them, so you will have to make a choice at some point.

4. Save Up Your Cash

Yes, upgrading your weapons is very important, but in the Equip section, you can see you can use your cash to buy some real heavy hitters. You can buy Armor, even just Regular Armor would greatly increase your power, as it increases your maximum health by 50%. It is quite expensive, priced at 30.000, but it is absolutely worth it.

In the second slot, you can purchase Gloves. Gloves increase the amount of money you earn, and they are also the least expensive thing you can buy here, so it makes sense to at least buy the Regular Gloves as soon as possible. The other two Gloves options cost premium currency, which you can get either by watching ads, or by purchasing them with real money. You could argue that it’s worth it to watch a bunch of ads to purchase the Gold Gloves before doing anything else in the game, as this will massively speed up the pace at which you earn money. It is going to take you a while, but it’s worth it, trust me. 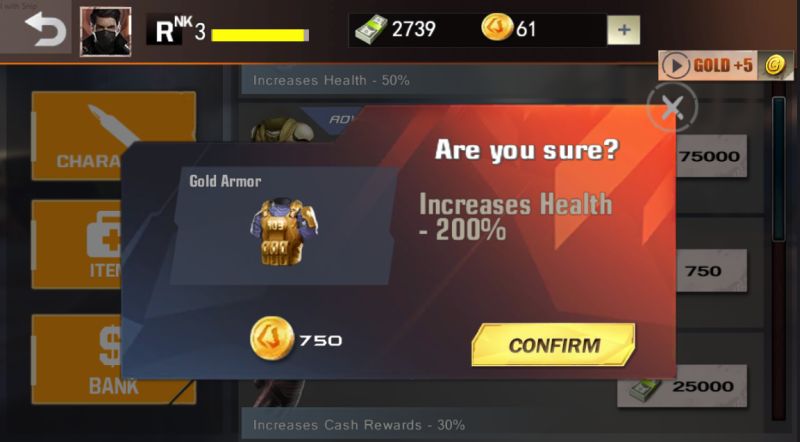 The third slot is the real deal: the Gold Clip. Gold Clip is the craziest item you can get in this game, as it gives you Unlimited Ammo. Which means you never have to reload or purchase ammo, which is a VERY sweet deal. Like, it’s insane the value of this, it makes winning stages easy…in fact a little too easy. Purchasing the Gold Clip will remove any challenge from the game, it turns you into an unstoppable zombie-slaughtering machine. This power has an insanely high price though, so it will take you a very long time before being able to afford it, as it costs 500.000 money to purchase the Gold Clip.

In the last slot, you can purchase the Gold Bullets. A pretty boring upgrade, as “all” it does is increasing your damage by 30%. Don’t get me wrong, it is crazy good, it’s just very uninspired. Anyway, this item is best purchased after you’re done upgrading your weapons, as the percentage-based bonus gets better the higher the damage value of your weapon is. This costs “only” 150.000, so you can buy it more easily than the Gold Clip. Yay.

For starters, always check the “Daily Task” section in the main menu, it’s free rewards just for playing the game, which is pretty nice. The Last of Plague Survivor has 2 main currencies: money, and gold. Both can be earned by playing the game, but gold is the premium currency, and you earn it at a much slower pace. You can also purchase gold by spending real money. Alternatively, you can watch a short ad and earn 5 gold, you can do this as much as you please, all you have to do is wait for 30 seconds between each time you watch the ads. This is nice for a quick infusion of gold to buy that extra grenade you absolutely need to clear the level you are stuck at, or it can be acquired to purchase the higher rarity gear.

Watching ads seems to be a recurring theme in the game: dying in a scenario means you will have to watch an ad, but realistically, if you are about to die, the best way to go about it is to pause the game and exit the scenario, as there are no penalties for doing this, and you won’t have to watch yet another ad.

You can also watch ads at the end of each scenario to double the rewards. And if you are at 0 medikits in the middle of a scenario, you can pause everything and watch an ad for a free medikit. Honestly, this feels more like cheating than anything else, but sometimes you really need that last drop of health to finish the mission.

There’s also a spinning wheel mechanic, you get 1 spin free every day, and you can buy additional spins for 5 gold or…by watching another ad. For 10 gold, you can also “shuffle” the prizes in the wheel, which means that if you don’t care about its rewards, you can at least try to switch them up before rolling for them.

This wraps up our guide for The Last of Plague Survivor. The game is pretty fun, even when played casually, and don’t get turned off by the potentially high number of ads you might end up watching: if you don’t care about progressing that quickly, it is perfectly possible to just play a couple rounds each day and not need to watch more than the occasional ad for the extra medikit or wheel spin. As we said, the game is pretty fun, the shooting is smooth, and it is not very heavy on the pc, despite the detail of the scenarios. It is basically a mobile reinterpretation of the timeless arcade classic “The House of The Dead”, what’s not to love? If you have found any other tips or tricks about the game, make sure to let us know in the comments! Until then, happy zombie hunting!