Gravity can cause some real troubles in human life. I’m pretty sure that plenty of you had a chance to learn of its merciless nature the moment you accidentally dropped your grandmother’s favourite porcelain teacup or when you spilled an intensely red wine on your freshly bought dress. I’m sure that toast would have tasted so good, but… oops, here it drops! All the way down on a dirty floor, and unfortunately, falling on the jammy side. Sounds like the worst nightmare, doesn’t it? Imagine now a completely opposite situation when you are told to drop, smash, destroy and break things to little pieces.

Some people find it a perfect stress-reliever and buy tickets for special breaking sessions during which they participate in real-life events with a sole purpose of destroying things in previously prepared environments. Such sessions can be pretty costly endeavours. There are, however, other and much cheaper ways which allow you to feel the joy of breaking the stuff. Spill It! – a new mobile game developed by Tastypill allows you to spill the wine and break the glass without leaving the comfort of your home.

In the game, as the name may suggest, you will have to intentionally spill your favourite drinks on the ground and break the glass by using nothing more than balls of a different kind, knowing that no one will punish you for that terrible deed. Furthermore, you will be rewarded if you do it in the most spectacular way and once you use the least number of balls to do so! Spill It! is maintained in a cartoonish and minimalistic graphic style which adds to the simplistic appeal of the game meant to be played to chill after a long day of work.

This is a puzzle game in which you will have to combine your general awareness of the rules of gravity with some logics in order to break the glass in the most effective way. The game, at the first glance, may look simple and easy to be played even by the casual gamers, but if you want to learn some useful tips and tricks about how to break the glass more efficiently, you might be interested in checking out our Spill It! guide below.

1. Learn The Mechanics Of The Game To Spill It More Effectively 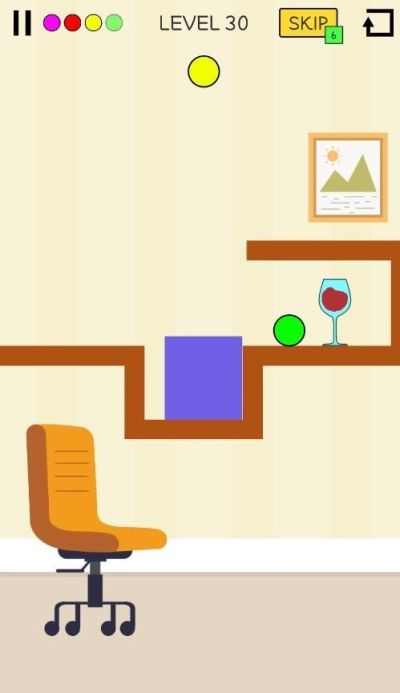 The Mechanics in Spill It! are pretty straightforward but it’s important to learn some hints on how to use them to your favour. Let’s begin with the basics.

In each level you will have from 3 to 4 balls that you can use to break the glass containing some unspecified liquid (let’s call it a glass of wine even though it’s not really proper to promote alcohol that obviously!). To do so, you will have to hold your finger on your device screen and release it in a place you want a ball to fall. Mind that spilling the wine is not enough, since it’s actually all about the glass. Sometimes you will find yourself in a situation in which you will manage to spill all the wine, but the glass will remain intact. Remember that only when the glass is shattered into pieces you are the winner and you are granted a pass to a next level.

There is no time limit per level, so you can plan your moves carefully and drop a ball under a right angle and in the right spot that will ensure your success. There are, however, reward penalties for using too many balls, so it’s best to use the least possible number of balls to break all the glasses of wine. The scale of your success is marked by the number of golden stars you are granted after each completed stage. The maximum number of stars you can collect per level is 3, whereas the minimal number is 1. The good thing about that is that you can repeat stages as many times you want, so you can improve your results as well as learn something new each taken attempt. 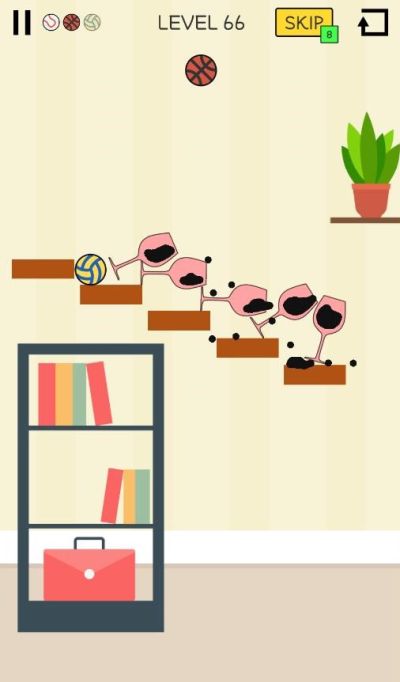 2. Bend The Physics To Your Favour 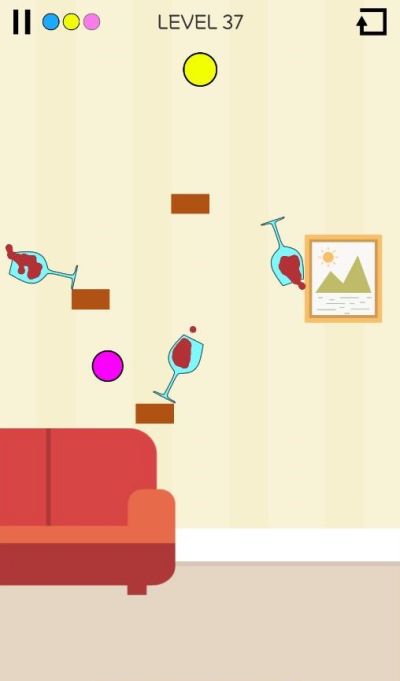 The majority of your job may depend on the spot you are aiming at as well as the right moment of releasing a ball, but in the end everything lies in your capability of predicting the events.

Before you release a ball you have to predict its trajectory and assess an approximate area where it will fall. Very often you will have to use walls as well as interactive objects in order to break all the glasses in the stage. Use them as levers or planes that will help your balls bounce in the right direction. If you happen to fail the stage or use too many balls, don’t hesitate to repeat a level and improve your result.

To help your balls bounce in the right direction, make sure that they will fall on rims, cones, bends and pointy borders of the objects. Remember that the balls won’t bounce if you decide to drop them on the flat plane, so it’s important that they meet curve spots at some point. 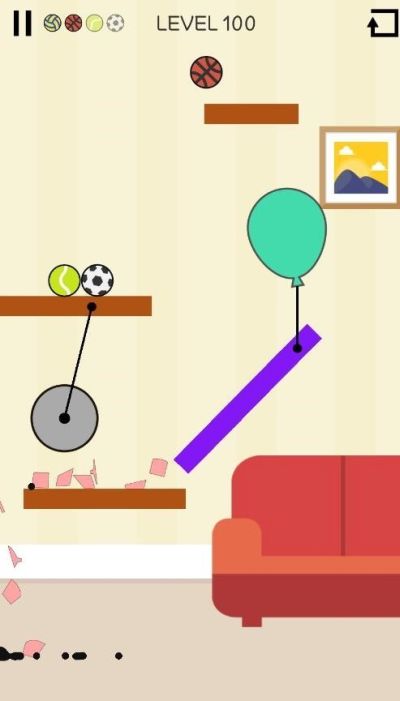 When it comes to the moving objects, things are much more complex. You want to remember not only about their curvature but also about timing your drops. In the later stages of the game, you will most likely have to deal with temporary supporting objects such as bars hanging on the balloons. In that case, for instance, in order to reach the glass, you might have to first use a ball to move the bar with the balloon towards any free gap so it can float. Then, you will have to release another ball and use the bar as a lever to break the glass. The time is the essence here, so in order to be successful you have to release your balls quickly, one after another, before the bar with the balloon leaves the upper border of the stage.

In the end, it is merely a description of a particular problematic case, but every situation is different and it all depends on your capability of predicting the events and assessing the chances of success.

3. Collect Coins To Get Cool Skins 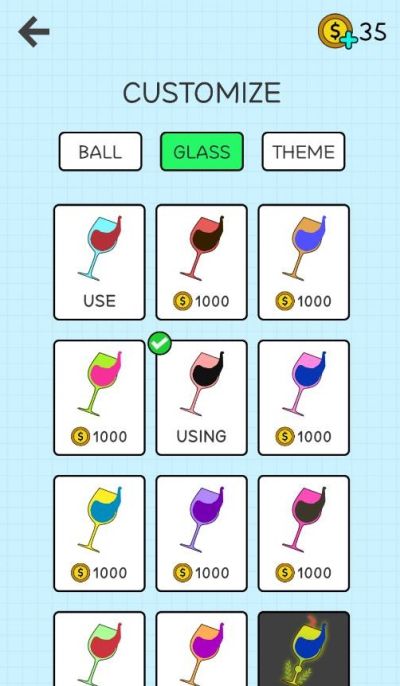 After you have learnt the very essence of the game, let’s proceed to the reward system in Spill It! The game is far from being competitive and its main purpose is to provide the players with fun and a stress-free gameplay. After all, as you remember, you don’t get serious penalties for failing a stage and you can repeat them anytime you want. In the similar manner, rewards are also simple and play a rather cosmetic role in the game.

Once you complete a stage, apart from being granted a number of stars, you are rewarded with gold coins – appropriately 5 per each gained star. You can exchange them in the in-game store for various custom skins which change the appearance of your balls, drinks and themes. The price of any new ball skins increase gradually by 500 gold coins, whereas the cost of new glasses of wine and themes is stable and amounts accordingly to 1000 of gold coins per glass and 2500 per theme. If you possess a vip account you also gain access to special rewards, such as golden, sihing glasses surrounded by a bay leaf. Of course, all of these store rewards don’t have any other purpose than just being there for the “cool looks”, so it doesn’t translate on your actual efficiency in the game.

At the end of every level, apart from gaining golden coins you are also given a chance to watch an advertising video of other Android games in exchange for getting an additional reward. Sometimes you will be given an opportunity to turn the Lucky Wheel and draw a random reward, such as golden coins of a different amount, and a free skip ability (which allows you to omit a level of your choice). In other times, you will be given 150 golden coins or a matching card with a hidden, random reward. As said before, you are not forced to collect golden coins for any other reason than changing the skins, so it’s completely up to you if you want to watch approximately 30 seconds long video or not.

And here we’ve come to an end of our Spill It! cheats, tips and tricks! Because of its appealing cartoonish graphic design it is a game suitable for both young and adult players who are fond of riddles and puzzles of all sorts. If you have additional tips or tricks for the game and you are willing to share them with us, then feel free to leave a comment!