Lion Studios should be a familiar name for those who like casual, no-frills games for their Android or iOS devices. The company had previously brought you Mr. Bullet, Happy Glass, and Ink Inc., and you’ve more than likely seen these titles show up in mobile advertisement videos.

The company’s latest such title is called Slap That – Winner Slaps All, or Slap That for short. The game features slap battles where you have two chances to hit your opponent. Timing is crucial here in order to hit the most powerful slap possible, so you’ll need to concentrate if you want to slap everyone the game says you can slap — everyone from the corporate boss to the mailman is fair game in this simple, yet addictive game!

This is a fun little game with no repercussions, and its mechanics are meant to appeal to the casual gamer who doesn’t look for a lot of bells and whistles in the mobile games that they play. But you will, of course, want to have the best strategy in place so that you don’t get knocked out early on and get overwhelmed once your opponents are stronger and more destructive with your slaps. So with that said, here’s our Slap That guide — it won’t be a long one, but it will certainly tell you everything there is to know about winning more Championships, beating your distance record, and unlocking new characters to play as.

The basic premise of Slap That is just that — engaging in slap battles with AI-controlled characters, where the one that slaps the strongest wins the battle. Each character gets two chances to slap, and in every battle, you will be going first, thus providing you with the advantage as you go along. But you’ll also need to be careful, because the battles will get tougher as you go on. Your opponents will get stronger, and that means if you don’t upgrade your health with the coins that you earn, there’s a chance you may lose the round if your opponent slaps you hard enough! 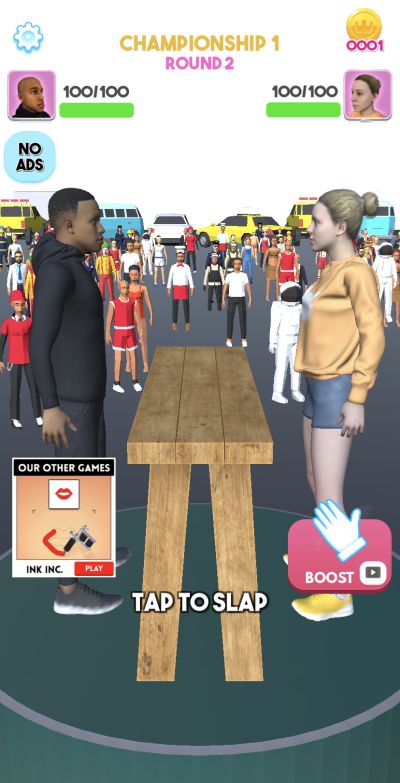 Losing the round will send you back to square one, forcing you to start the “championship,” or stage, once again, though you will be given the option to watch an ad video and get an extra slap. As you’ll notice, the first few Championships will be very easy, just as long as you upgrade smartly once you’ve got enough coins.

Winning a round will earn you coins, and once you win the Championship, the option to watch an ad video will pop up once again, this time allowing you to double, triple, or even quadruple your earnings! The option to watch an ad will also be available when it comes to unlocking new characters — each Championship will unlock 20 percent of the character you’ll be unlocking next, and watching an ad will allow you to add an extra 20 percent, thus allowing you to get new characters in double-time.

As for the actual game mechanics, a target will move from left to right, and your objective is to aim it so that the target is right above the red dot on your opponent’s face. Next, the target will move up and down, and this time, you’ll need to make sure the bulls-eye is as close as possible to that red dot. Miss it completely and you won’t get to slap.

Land somewhere on your opponent’s face, and the result will be less than perfect — it may be “great” or “ok” in most cases, but that will result in less power and a less impactful slap than what you’d execute if you got a “perfect” notification. This could lead to a dangerous situation once you’re against the tougher opponents, so make sure you’re as close as possible to the bulls-eye when slapping, even if you have the advantage by virtue of slapping first!

2. Take Your Time When Targeting Your Opponent

One common mistake that first time players make when playing this game is tapping on the screen the very moment they believe the cursor/target is right where they want it. Although Slap That’s mechanics are so easy that they may soon become second nature to you, it’s usually better to take your time and make absolutely sure that the target lines up with the red dot, regardless whether it’s moving horizontally or vertically. 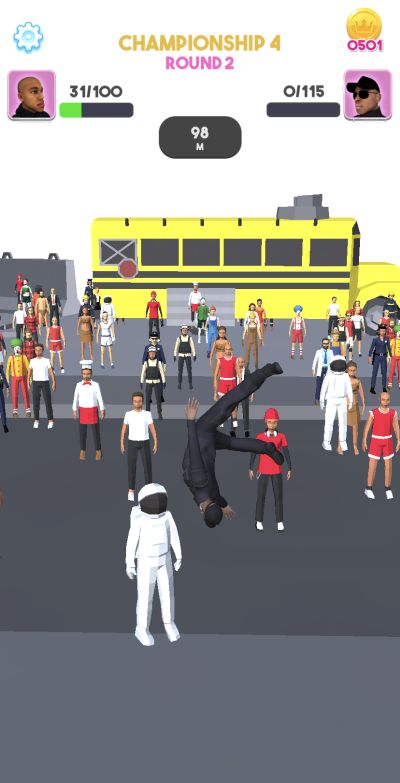 If you get a “miss” notification, you will not get to slap at all — this is different from what happens when your opponent misses, as you may see them actually slapping and missing your face, with no damage resulting in the process.

3. Which Of Your Stats Should You Upgrade First?

There are only three stats to keep in mind when playing Slap That — your Health, your Power, and your Offline Earnings. All three are visible on the bottom part of the screen, and you can either watch ad videos or pay coins in order to upgrade them. We would definitely recommend the video option if it’s available — otherwise, if it isn’t, you will pay coins, and the amount of coins needed to level up a stat will progressively increase as you keep upgrading it. Pretty standard stuff, but which of the three stats should be prioritized over the others?

If you’ve got quite a hold on your slapping accuracy, your Power (the second stat — right in the middle of Health and Offline Earnings) should be your first priority when upgrading, followed by Health. This increases the odds of taking out an opponent with just one slap, and if you hit perfect slaps more often than not, those one-slap knockouts should be fairly common if Power is prioritized. On the other hand, if accuracy is not your forte, the opposite will apply — make Health your first priority and Power your second. 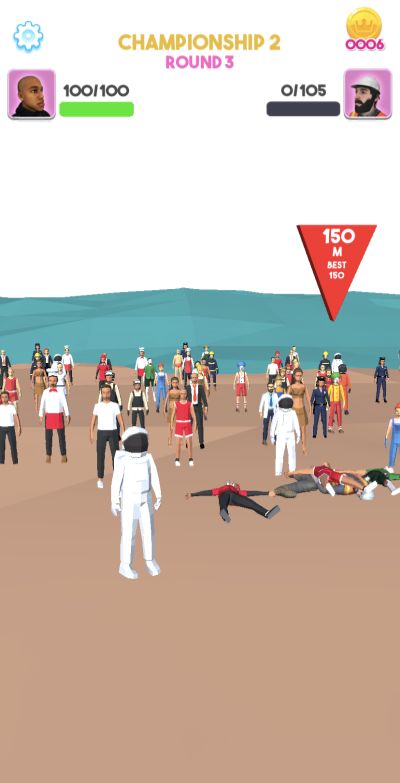 Basically, you want to stay alive in order to make it to the second slap — your opponent may be the one that hits you with a one-slap knockout if you don’t have enough Health! As a rule of thumb, you don’t want to be too far from your opponent in terms of Health when talking about upgrading this stat — for example, if your opponent is at 150, you can upgrade until you hit 140 or so, as anything lower puts you at risk of getting knocked out.

Either way, we don’t see much use in upgrading Offline Earnings too often, unless you’re the type of player who only plays the game a few times a day. But even if you are, Offline Earnings should ideally be your third priority, regardless whether accuracy is your strong point or not. Don’t neglect it, however — there is a bug in the game that prevents players from collecting their Championship winnings, on occasion, and we shall be discussing this bug later on in this guide. Those offline earnings just might come in handy if you’re losing money due to the aforementioned issue.

In relation to your stats, you will also see on occasion an option to watch a video in order to get a temporary boost. We strongly advise you to watch these videos, as they won’t be available to watch all of the time, though the permanent upgrades you can get by leveling up your stats are ultimately better than the temporary ones you could take advantage of.

After each knockout, you should see a distance marker that tells you how many feet your opponent traveled after hitting the knockout slap. But it’s more than just bragging rights here — if an opponent flies farther than usual, you will normally get more coins once everything is tallied, which makes your accuracy even more important. 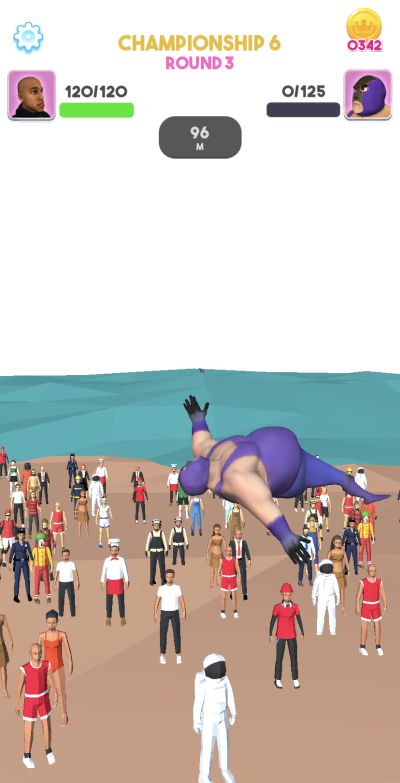 The obvious thing to point out here is that upgrading your power will allow you to execute stronger slaps and make your opponents fly greater distances after you’ve hit them with the knockout slap. However, it’s not just power the makes a difference here. The spectators watching the slap battles could get in the way of a flying opponent, and while it’s fun to see them get knocked down after your opponent gets flung all the way out, their being in the way could compromise your distance, and so can the layout of the Championship.

Based on our experience, it’s the Championships that have an accompanying body of water in the layout that give you the best chance of setting new distance records and earning more coins.

It’s also a common misconception that you can increase your distance by taking it easy with the first slap, then bearing down on the second, with the thought process here being that you took out some Health in the first slap, so taking out much more Health in the second than whatever the opponent has remaining will result in an ultra-long distance.

That is not true at all, as it is possible to set new distance records with your very first slap. Besides, you wouldn’t want to get knocked out right after deliberately taking it easy with slap number one!

5. Beware Of The No Video Bug

Pointing out bugs isn’t something we enjoy doing, but if you’ve been playing the game for some time, you’ve undoubtedly noticed that there appears to be a glitch after certain Championships are completed. ideally, you will be able to watch a video to multiply your earnings, but just like most any other mobile game out there, Slap That can only serve up so many videos. And when there aren’t any more videos to watch for the meantime, you’ll notice that you cannot exit from the window that shows your earnings in order to claim your base, un-multiplied coins. 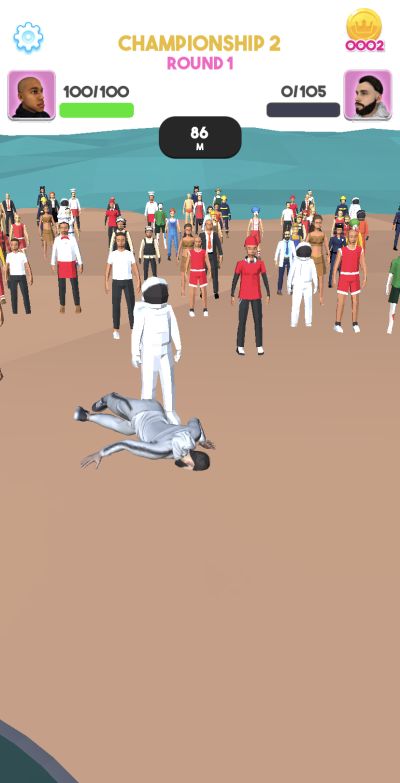 Instead, you’ll need to exit the game and restart it, but once you do, you’ll notice that you haven’t gotten any richer — it’s as if your winnings are nullified by quitting the game, but you will nonetheless be able to move on to the next Championship.

By the looks of things, this is almost certainly a bug, because we don’t see why you should be deprived of your earnings just because you chose to — or were forced to — pass on the ad video. This is, however, a fairly new game, so a few kinks here and there can be expected and updates should come along soon to patch up this issue. Most of the time, you wouldn’t run into this problem, but to set your expectations, it will happen every few Championships or so.

6. All The Characters Play The Same Way

Despite the high-end graphics this game possesses, Slap That is, at the end of the day, a casual game. As we explained in the first tip, the mechanics are extremely simple, and the levels can go on endlessly — true hallmarks of a game in this broad genre. One more hallmark rings true in this title, and that’s the fact that all the characters slap the same way and do not have any advantages or disadvantages over the other. Not even the big wrestler guy with a mask and leotard has a power advantage over everyone else — it’s all about collecting characters here, and not about reinventing the wheel, after all!

Ideally, the collection element of the game will make it worth it to unlock these new characters, but we did notice that there is no way to switch from one character to the next once you’ve unlocked more than one! We’re hoping this is a bug that will soon be squashed, but given the lack of differentiation between characters aside from their appearance, we wouldn’t call it as major as not being able to claim your money once you’ve won a Championship and there aren’t any videos to watch so you can multiply your earnings.

And with the final tip we conclude our guide for Slap That. We hope you’ve enjoyed our collection of tips and tricks. In case you are aware of additional tips for the game, don’t hesitate to share them with us in the comment section!