Shortcut Run is a hypercasual game by French game developer Voodoo, home to an endless amount of addictive mobile titles. Voodoo has previously created fantastic casual games such as Helix Jump and Purple Diver, with Shortcut Run being the newest in their growing catalogue of over a hundred games.

This new game has very simple controls, and can be played by anyone. But a simple game can still hold lots of secrets for players to enjoy. While the game may seem straightforward at first, there are actually strategies that you can use to perform even better in-game.

Shortcut Run’s appeal is in its simplicity, but it can get challenging at the later stages. Reading our Shortcut Run guide, learning our hints, tips, and tricks will help you be consistent in your victories. After all, it’s not just you who can cheat the race in this game. Your AI opponents can do so, too. With that in mind, you will have to make use of our strategies to stay ahead of the competition.

They say that in life, there are no shortcuts. In this game, the whole point is making better shortcuts than your opponents. With our strategy guide, you’ll be able to completely swamp other players and get a high score. So, without further ado, let’s get running.

The Basics Of Shortcut Run

Shortcut Run is a simple racing game but with a twist. You play as a runner in a track and field contest. You have a starting line and a path leading to the finish line. However, the path to the finish line is never a straight line. It’s almost always a curvy path which can even branch out to separate paths. Sometimes, small patches of paths can also be found outside of the main path. 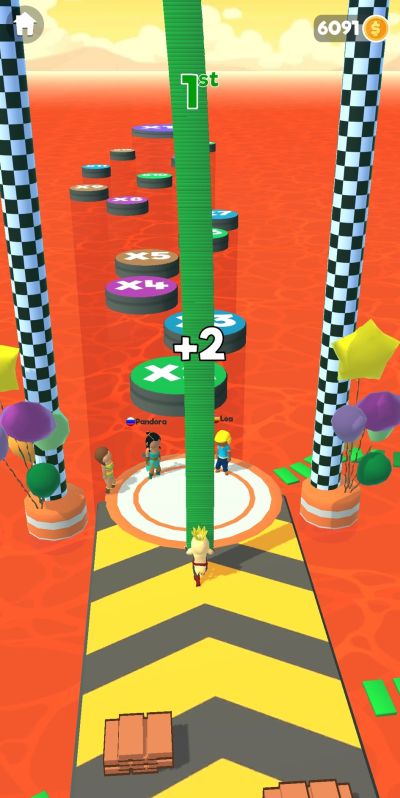 You have to be this tall to ride.

What makes Shortcut Run different from your regular track and field contest is your ability to pick up floorboards. The floorboards you pick up can be used by you to make your own paths. Yes, instead of just following the set path for the race, you can build your own path – shortcuts.

The bridges you make to make paths away from the main one will help you get ahead of your opponents. The game, therefore, isn’t about who can run the fastest – it’s about who can collect floorboards and make the most efficient shortcuts to the finish line.

Picking up floorboards and creating your own path is the main strategy in Shortcut Run. Instead of following the determined route, you have the chance to make and follow your own path to the finish line. 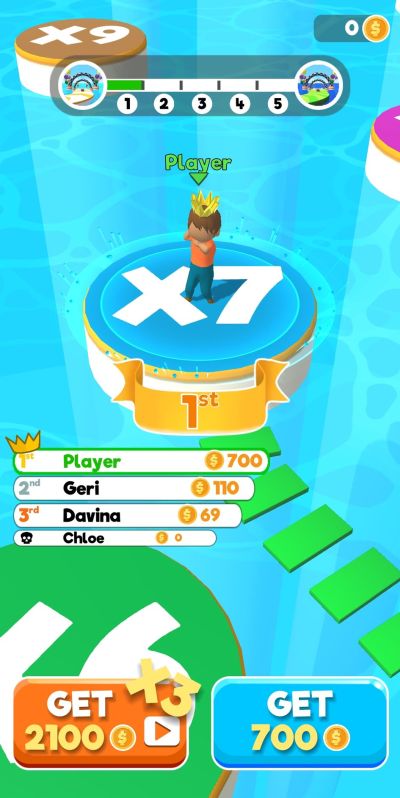 Create your own path to victory.

Remember your geometry class: A straight line is the shortest route you can take to get somewhere. Take every opportunity to make a shortcut when there are long curved paths. That’s the most efficient way to cover ground.

In case you’re feeling more confident about your floorboarding skills, you might also want to make paths to the small islands mentioned earlier. Usually, these isolated spaces have loads of floorboards you can collect, while also giving you a foothold for your next shortcut path. 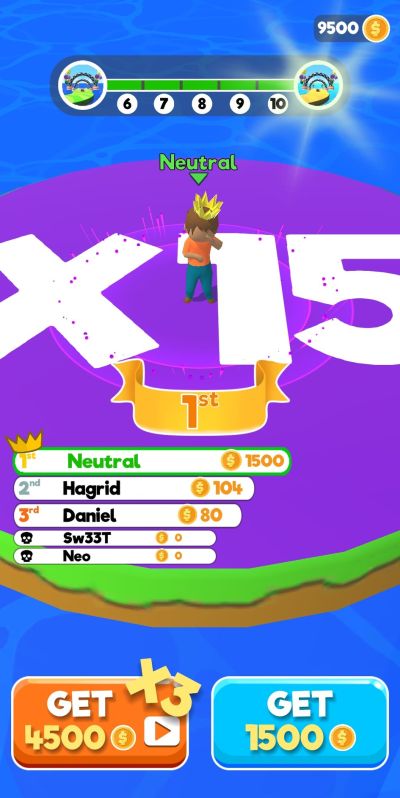 With enough practice and with our tips, you can easily reach x15 island.

If ever you run out of floorboards, your character will try a last-ditch effort to reach his destination. It will leap forward for some distance. It can land with its two feet and continue running on the path. If ever it lands on the ledge, don’t worry! It can also carry its own weight up the ledge.

Mastering the art of floorboarding will open up the game for you. You can get creative in the way you use your shortcut paths to victory. Once you’ve mastered floorboarding, the game will become so much easier for you.

3. Winning Isn’t Everything: How To Get A Super High Score In Shortcut Run

Shortcut Run is a friendly game for beginners. As long as you reach the finish line, you get to clear the level, even if you don’t end up in first place. With that being said, your score is based on your placement and the number of floorboards you bring with you to the finish line. The more floorboards, the higher your score will be. The better your placement, the higher score will be.

Furthermore, when you finish first, you get the chance to score even more with a bonus run afterwards. When you reach the finish line, you will be allowed to use whatever floorboards you have left for the bonus run. Fifteen islands will appear past the finish line, and each island will have a corresponding multiplier. Whichever island with the highest multiplier you reach by the time you run out of floorboards will be applied to your current score. 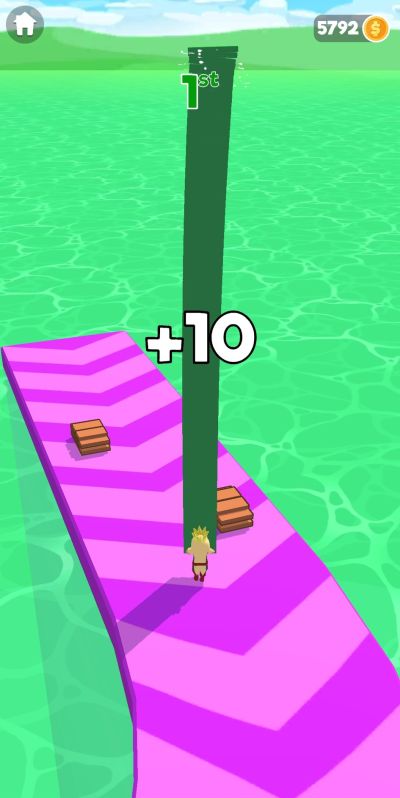 Did I take a wrong turn? No, you can turn around and collect more floorboards when you need to.

Finishing first will garner you 100 points automatically, which is then multiplied to the multiplier on the island. So, for example, when you reach the x10 island, then your final score will be 1,000 points. When you reach the x15 island and you still have floorboards left, you will get the bonus points from the excess floorboards as well. Getting to the furthest island while using up the least number of floorboards is the key in scoring high.

A great strategy for the bonus run is to run straight. This will let you spend the least number of floorboards as you possibly can. Feel free to swipe slightly left or right to run past through some islands on your way, as this can save you a few more floorboards. If you will have to run further to the right or the left to get to an island, just go straight. As long as you have enough floorboards to reach the x15 island, this strategy will save you the most floorboards.

If you don’t have enough floorboards to reach the x15 island, you can still run for the furthest island you can. This is when running to the left or to the right will come in handy. Just remember that you don’t actually have to go through all of the islands in sequence. You can just go straight to a specific island and its multiplier will be applied to your score even if you don’t pass by all the other islands.

There’s another strategy that we can recommend, but some people might call this an exploit. But cheating in this game is encouraged, so don’t mind those people calling this a cheap way to score big.

In Shortcut Run, you will be racing against a few other opponents. While the game may seem all friendly between the different competitors, you can actually interact with the other players and gain an advantage over them.

Whenever you lay down floorboards to create your own path, your character will gain momentum and speed up. While this happens, a trail of smoke will appear on your character’s path. When you hit another character while doing this, you’ll push them out of the game. They’ll be out of the competition, and whatever floorboards they may be holding will be added to your pile. 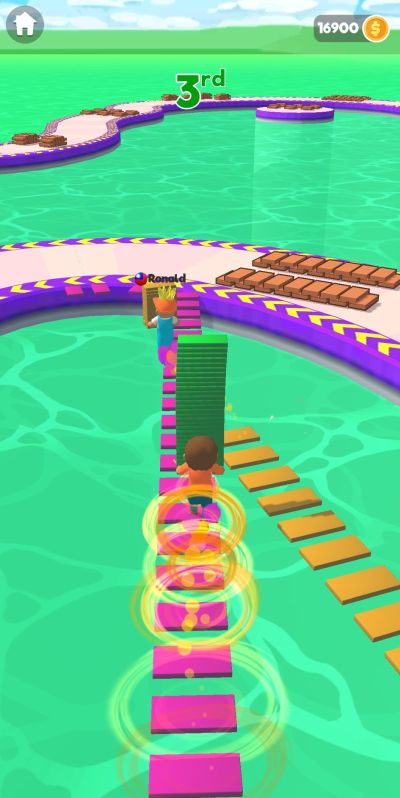 Piggyback on your opponents’ shortcuts and push them off the edge!

As an added bonus, the momentum you get from running on a shortcut also applies to shortcuts made by other players. Follow a player as they make a shortcut then push them off as your both return to the path, and you hit two birds with one stone!

The first one hundred levels of Shortcut Run are fairly straightforward. There’s a starting point, a finish line, and a path towards the end. However, later levels will introduce different obstacles that will make the game look like Takeshi’s Castle or Fall Guys. 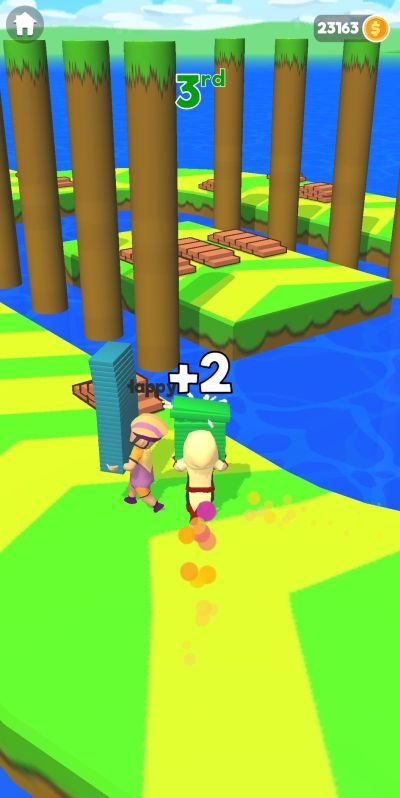 Some stages will have additional obstacles, such as this one on Level 126.

When you see these, don’t panic! You can learn what they do from how the other players interact with these obstacles. Some obstacles will launch you up in the air, which you can use to skip some hard paths and other obstacles. There are also obstacles that will instantly push you off the level, just like what happens when a momentous opponent hits you. Avoid these at all cost!

When you get very good at laying down the floorboards, then you will naturally get lots of rewards as well. The score you get for each level are converted to coins, which you can use to buy a random skin.

Currently, the game has twenty-seven (twenty-eight including the default skin) different runners you can unlock and use. The skins are grouped into three tiers: Common, Rare, and Legendary. The Common skins can be obtained by spending 2,500 coins to get a random common. 5,000 coins are needed for each rare, and finally, you can get the Legendary skins for 10,000 coins apiece. 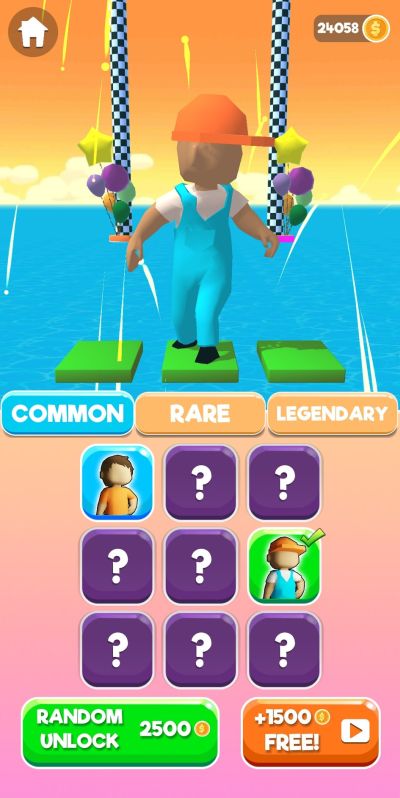 Use your hard-earned coins to unlock new skins!

Once you’ve unlocked all the skins, the game becomes a marathon for how far you can go. Shortcut Run currently has hundreds of levels for you to complete, with the challenge racking up the further you go. While you improve your floorboard-laying skills in the game, your opponents will also get better at racing against you. Keep improving your shortcut-making skills and knock out all your opponents. Follow our guide and win all the Shortcut Run races you partake in!

If you don’t get first place, you can maximize your score by running back and collecting a lot of floorboards. I once got over 5000 coins using that strategy