French game developer Voodoo is well-known for its many super-casual games for iOS and Android devices, including Helix Jump, Snake vs. Block, Stair Run and a number of games with the .io extension. One of their latest mobile titles is called Scribble Rider, and as the game’s typically laconic description states, it allows you to “Roll, Swim, Stick and Fly with the ultimate ‘All-Terrain’ vehicle.” You can actually collect multiple vehicles in this game, as well as multiple user characters and special materials for your wheels, and when it comes to the number of levels in this game, they just keep on coming, even when you’ve unlocked and purchased everything there is to unlock and purchase.

You may think that such games are so simple that they don’t need any kind of detailed guides for first-time players, but as Voodoo has proven time and again, their titles can be rather hard to master, and some of the randomly generated levels may be substantially tougher than others. That’s why we have created a Scribble Rider guide that covers everything you need to learn about this game, and with that said, we hope that our tips can help you win more of those one-on-one races that make up each of the endless levels in the game!

1. The Basics Of Scribble Rider

There isn’t that much to the gameplay of Scribble Rider, which pits your character and their vehicle (or bike, to be specific) against other opponents, supposedly from other parts of the world. We say supposedly, because the game ostensibly gives off the appearance of one of those titles where you can compete against “real players,” though there’s no feature that allows you to choose your name and your location and/or nationality. 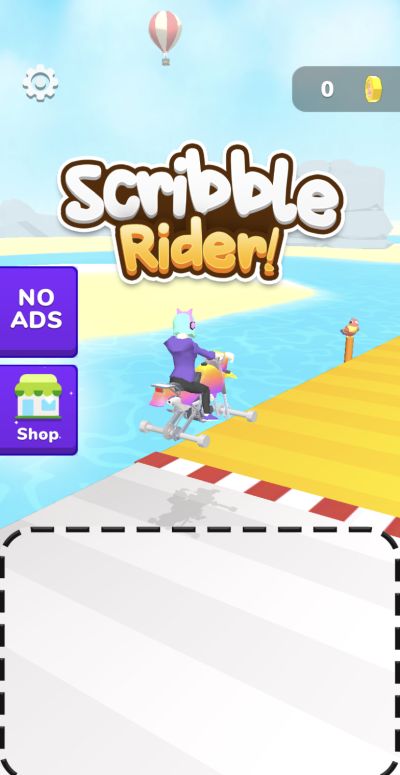 The game won’t make it clear at first, so it’s not uncommon for players to use the white space at the bottom to draw a path to the finish line. This is actually for drawing the shape of the wheels, which will play a part in determining how quickly you can reach the finish line and whether or not defeat your opponent. Different types of surfaces and different obstacles will require different wheel shapes, and we shall get into this in a separate tip that shows you which wheel shapes to use and when.

At the end of the level, you will earn a handful of coins, which are the game’s only form of currency if you win, and you will then have the option to replay the level or move on to the next one. However, before proceeding to the next level, the game will ask you if you wish to watch an ad video to triple your earnings. Coins can be used to purchase new characters/outfits, wheel materials, and bikes/vehicles. While this game appears to come with endless levels, there are only nine of each which you can unlock and purchase at the time of writing.

In addition, characters, vehicles, and wheel materials get unlocked as you complete more races, as you will also collect gems that go toward unlocking this new content. These gems can also be tripled by watching the same ad video that we mentioned above, so you won’t just be earning a great deal more coins by viewing those 30-second clips but also expediting the process of making that new content available for purchase in the in-game store.

As long as you make sure you don’t let your finger off your device’s screen at any point while drawing, there is no limit as to the type of shape you can draw for your vehicle’s wheels in Scribble Rider. You can draw circles, oblongs, squares, triangles, squiggly lines, or even words in script, but at the end of the day, you’ll need to make practical choices that could get your vehicle to the finish line at the soonest possible time. 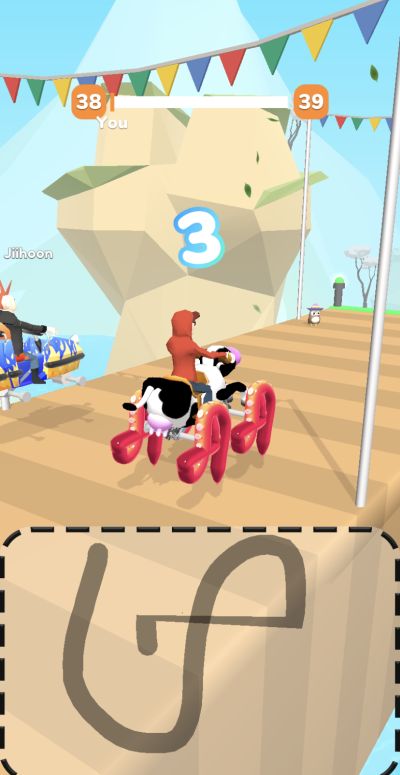 Typically, it’s larger shapes, particularly three- and four-sided ones, that produce the best results in the game, as well as S-shaped designs or similar ones that could also cover a lot of ground. If you’re trying to go for speed, nothing beats circles that are drawn as perfectly as possible, or as perfectly as the game will allow you to. You can make these solid circles or simply outlines, but if you prefer speed over ground covered, circles are the best way to go.

3. You May Need To Change Wheel Shapes During The Race

Based on what we have observed in the game, the general settings and backgrounds of the levels change after every ten races, but as is the case in most games of this kind, the obstacles and other finer details are procedurally generated — or randomized, in layman’s terms. There are various types of platforms to navigate, and you may need to climb some steps and walls in order to get to the next part of the track.

And not all general wheel shapes will be suitable to every platform or obstacle or wall, which means you will need to redraw your wheels in order to make some changes on the fly. (Also bear in mind that some wheels may break while you’re trying to get past certain obstacles!) 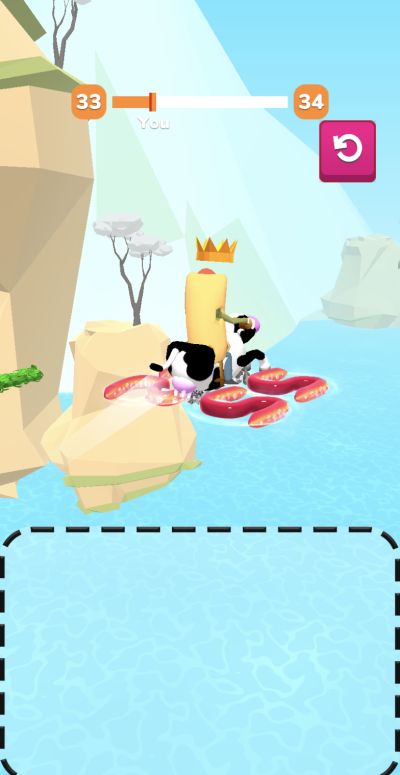 When it comes to stairs, mountains, and any other rough surface that you need to climb, it’s best to use a large polygon shape or an S-shaped or 5-shaped line that will allow you to effectively move upward. Circular shapes do not do well on these surfaces, but they will serve you well when you’re navigating smoother, more level surfaces or climbing smooth walls that don’t have any rocky or craggy elements to them.

It’s also worth mentioning that your vehicle will momentarily stop moving while you’re redrawing the wheels, so try to move as quickly as possible when doing this! This is different from how it is right before the race begins, where you have all the time in the world to decide on a shape and finish drawing it.

There may be some instances where your opponent has pulled away by such a significant distance, greatly reducing your chances of picking up the win and earning those coins or unlocking more characters. When this happens, the game will give you an option to freeze your opponent for a few seconds — hit the blue Freeze Opponent button that appears on the top part of the screen. 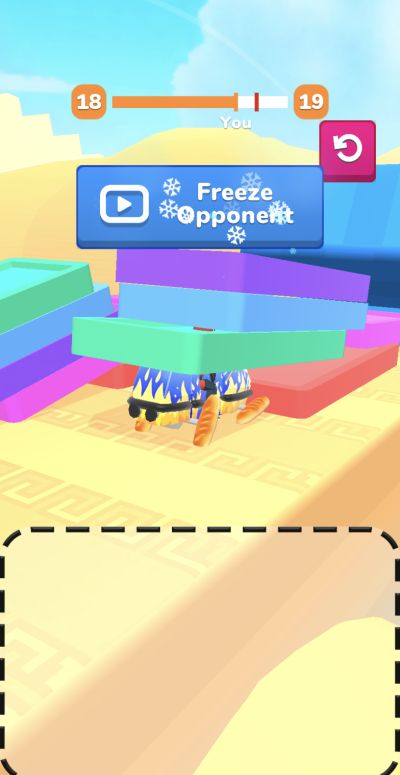 This will temporarily stop your opponent in their tracks, though the tradeoff here is that you will need to watch a 30-second clip. This can often be an unwieldy process, so what else can you do if you want to guarantee a win against your rivals in Scribble Rider?

The simplest thing to do would be to hit the magenta-colored Restart button located underneath the level indicator on the top part of the screen. This allows you to redo the entire race from the very start, and since your opponents don’t appear to be user-controlled, you don’t need to worry about getting punished for rage-quitting. Of course, you can always replay the level if you end up losing, though with that having been said, you CANNOT do this any longer once you’ve decided to move on to the next level, win or lose!

5. How To Operate The Drone Once Activated

Sometimes, you may encounter a cliff or a mountain in the game that is simply too high to climb with your vehicle alone. That’s when the game will activate your bike’s drone feature, allowing the vehicle to fly upward with the wheels spinning around and guiding its flight. This is admittedly a rather tricky feature that took us a while to figure out, but we have observed a couple of things that may help you make the most out of the drone capabilities of your vehicle without losing any ground against your opponent. 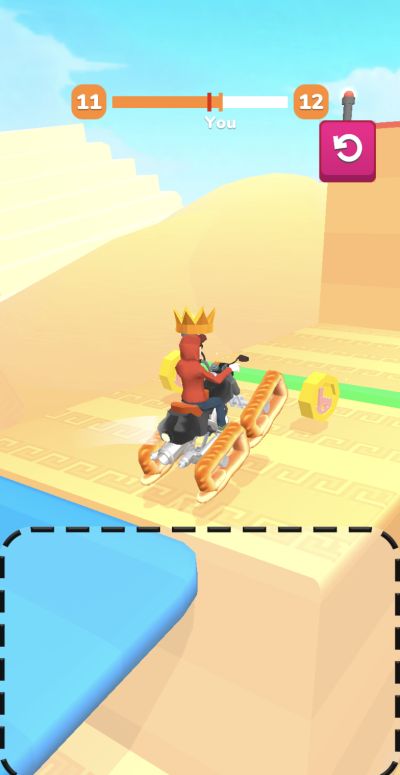 The first thing to remember is that circular-shaped wheels do not make good propellers when your vehicle is in drone mode. It’s usually best to change the shape of your wheels to a short, straight line that could properly mimic the motions of a helicopter’s rotor blades.

However, there may come a time when your bike will lose altitude, which would force you to re-draw the wheels in order to ascend once again. Keep doing this until the drone is automatically deactivated and you should return to the usual scheme of things with your lead intact, or at the very least in better shape than your opponent!

Now this is something you may have already been expecting, given the bare-bones mechanics of Scribble Rider. By clicking on the Shop icon on the main screen, you can purchase any number of characters (or “outfits,” as the game calls them), bikes, and wheel materials. Keep in mind that these do not become available for purchase until you’ve unlocked them through completing more levels, but when they do, the price may vary. 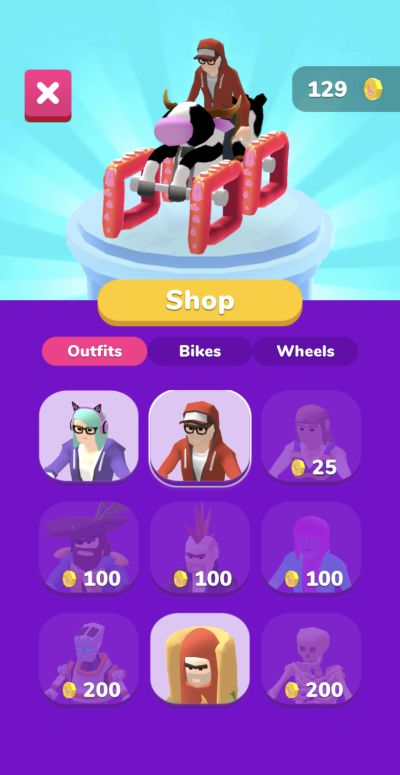 In terms of collectability, it’s certainly worth it to earn as many coins as possible by completing more and more levels, then using those coins to purchase new content. But regardless of which outfit, bike, or wheel you choose, the gameplay will remain the same — any differences are purely cosmetic, and you won’t get any special power-ups, buffs, or de-buffs by choosing someone (or something) new. They’re all there for collection purposes and to break the monotony, but other than that, the gameplay remains the same.

7. The Ad-Free Version Isn’t That Expensive At All

Last, but not least, you may or may not be annoyed by the myriad ads that pop up in between levels, or specifically, when you’ve chosen to proceed to the next level and are preparing to watch a video to triple your coins/gems or have opted to restart the race because you’re way behind or aren’t happy with the design of your wheels. If you want to get rid of these ads, which can arguably be quite intrusive, all you need to do is to hit the No Ads button on the main screen and pay $3 USD or its equivalent in your local currency. 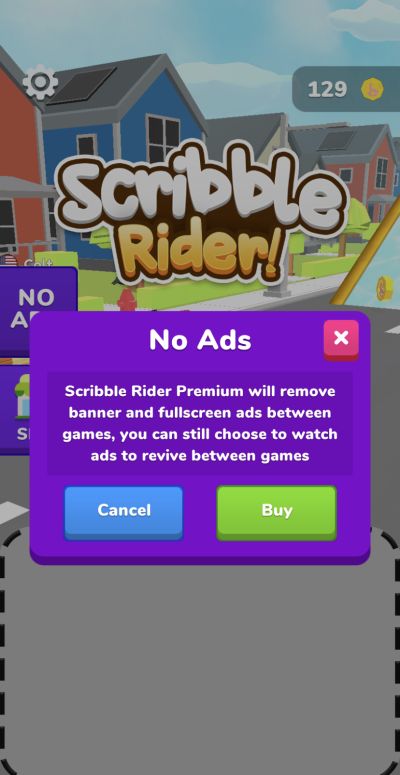 Playing the paid version frees you from those occasionally annoying clips that could affect your momentum. You will, however, still want to voluntarily watch those ads in order to triple your post-race earnings, even if you’ve got the paid edition on your device.

And that’s all you need to know to succeed in Scribble Driver! In case you know additional tips or tricks for Voodoo’s new mobile title, then be sure to drop us a line in the comment area!