Kwalee is among the longest standing developers and publishers of mobile games and has been active in the mobile gaming industry since 2014. As a developer and publisher of numerous casual arcade games, the company has gained popularity in several countries. With huge hits like Draw It, Looper!, and Go Fish! just to name a few, Kwalee continues to provide simple and addictive games for people who enjoy fast casual games that you can play even with the shortest free times to spare.

Rocket Sky! Is a fun and unique game from Kwalee currently exclusive for iOS platforms. As a casual arcade game with easy controls and simple game mechanics, it’s definitely something that can be learned and enjoyed by players of various ages and expertise. Your goal in Rocket Sky! Is to reach as high as you can to earn points, points you earn can be used to purchase various upgrades each with its own way of helping your earn more coins. Tapping and holding the screen launches your rocket and propel it higher and higher and releasing it will stop the engine to cool it done. Continuously holding the screen will cause and overheat and letting the rocket overheat for a long time will make your rocket explode.

As Rocket Sky! Is a pretty easy game to learn given its controls and objectives, anyone who plays it will definitely make progress in the game. There are no increasing challenges ahead as you only need to constantly break your own and other players’ records and reach greater heights one after another. If you want to earn points fast, reach greater heights at a more rapid pace, and unlock all rockets and planets, then follow our Rocket Sky! guide and learn easy tips, cheats and strategies to boost your progress in the game.

1. Keep Your Eye On The Temperature Meter

Rocket Sky! is basically as simple as it comes and practically everyone can learn to play it after just one or a few runs of the game. With the smallest details on screen, though, it is still likely that you will miss your focus on what matters most in the game as your eyes get caught on some attractive details. As your rocket continues to ascend higher and higher, you will see records of other players and eventually see your own current best record. While these scores do give you a concrete idea of where you stand as far as progression is concerned, constantly checking these scores out won’t actually do you any good. 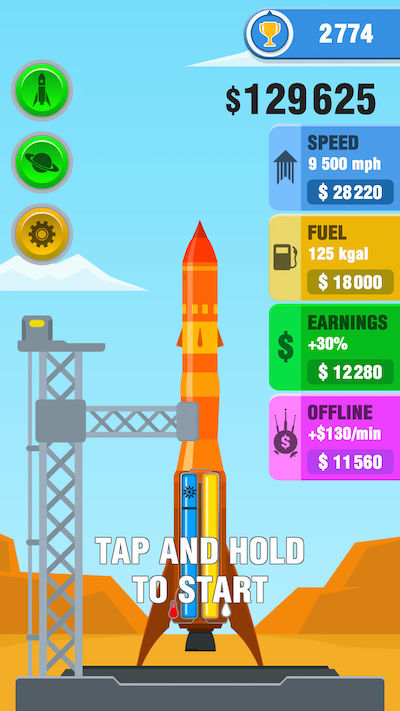 There are actually two bars on the rocket worth paying attention to. The blue bar on the left which indicates heat as it starts to turn red and the yellow bar at the right which tells you how much fuel you have. Of these two, though, you should only pay close attention to the temperature meter as this is the only thing in the game which can be controlled to a point that it affects your performance after each launch.

On the first few launches, you will constantly see a warning above your rocket notifying you whenever the rocket is overheating. Later on, that notification will no longer be around but then your rocket continues to glow red every time it overheats. These are both helpful guides to prevent your rocket from exploding but the best way still, is to keep your attention on the red meter on the left side of the rocket.

Every bit of money you earn on each launch is important as you will have to invest it continuously on various unique upgrades that will help you earn more money in return. Upgrading speed enables your rocket to ascend faster after launch and almost always guarantees beating your previous record. Having more fuel naturally keeps your rocket flying longer and, along with speed, will also contribute to you reaching greater heights and consequently earning more money. While both these upgrades seem directly contributing to the money you earn, the next upgrade, earnings, adds a multiplier effect on every bit of money you earn in the game, making it an equally important consideration. Lastly, but definitely not the least, is offline rewards which, when upgraded, increases the amount of money you earn per minute you are away from the game. You will have to go offline at some point, and most probably, even spend more time away from the game than being on it. With that, upgrading offline rewards is as important as the rest of the upgrade options.

It’s a typical scenario to be confused as to which upgrades to prioritize as you would naturally have to upgrade each one. In the case of Rocket Sky!, you should consider all upgrade options as important as each other. As upgrade costs grow more expensive with each upgrade, what you should do is upgrade the least expensive one. Following this approach will let you efficiently hop from one upgrade option to the next and, in effect, be able to secure more upgrades with the money you spend on it.

More importantly, there is no point in keeping any amount of your earned money idle. Spending your money wisely in the game means spending it as soon as you earn it and only stop doing so if the next upgrade is beyond what you can currently afford.

If you look closely enough at the temperature meter, it is basically divided into 2 parts. The longer bottom part indicates safe flight free from overheating and the smaller upper half with a mark on it is the critical are within which you have to manage your thrust and avoid completely filling up the car as doing so results in the rocket’s explosion. 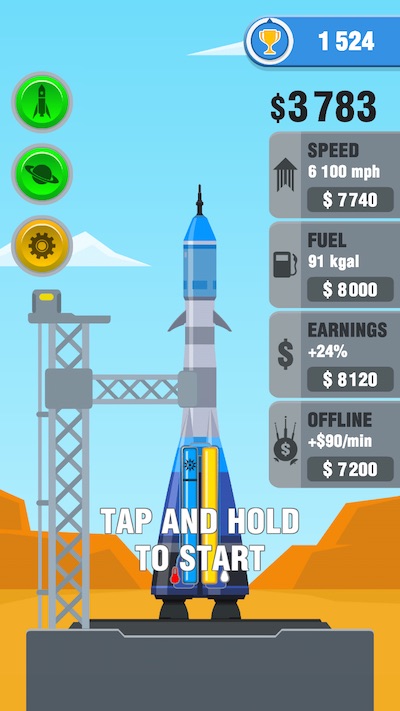 Typically, you will have to switch between holding and releasing the screen whenever the temperature meter makes it past the lower safe half of it. While doing this may help you survive each flight and avoid explosions that leaves you with barely any rewards, it is not the most efficient way to go.

To ensure that each launch is at least as good as the previous one and potentially better, considering recent upgrades. What you ought to target is keeping the red mark on the temperature meter above the lower half of the bar and below the top of the upper half.

Preferably even, keeping it as close to the top of the bar as much as you can leaves the rocket ascending at its maximum pace, and while it’s hard to achieve with the conventional holding and releasing method, rapidly tapping on the screen as soon as you reach the optimum point makes it a whole lot easier.

From the rocket’s launch up until you make it past the lower half of the temperature bar, continue holding the screen. Once the temperature meter gets close to the critical explosion point, start tapping away at the screen to keep the temperature as consistent as you possibly can. It is very much understandable to have a bit of challenge doing this on the first few attempts. You will either tap too fast and the rocket’s temperature will continue to rise or tap a little slower and dramatically decrease temperature but loose some speed. It may take some time and practice to get it just right but in the long run, it will pay off with faster money-earning and game progression.

Although some players completely understand the value of advertisements on free-to-play mobile games, it is completely understandable that some people can still find it distracting at some points. In Rocket Sky!, video ads playing in-between launch attempts may disorient some players and make them loose their momentum. For others, who can make a series of launches fast to earn a good amount of money, having no ads can be more efficient especially at the early part of the game.

If you are distracted in some way by video ads in the game, then simply turn your Wi-Fi off as you can play the game completely offline. Keep in mind, though, that doing so will prevent you from earning some boosters that can help speed up earning money.

5. Watching Ads Will Pay Off Later

While the double rewards you get from watching short video ads in the game won’t seem to compensate much at the early part of the game, at some point where the amount of money you earn will hardly be enough to purchase an upgrade, earning twice as much on each run will be very much worth it. Subscribing to this method is totally dependent on you and deciding when to do sill also be dictated by your greater need for more money at some point. 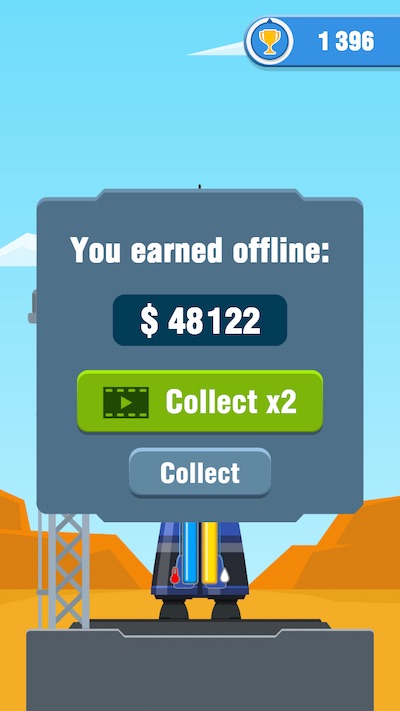 On top of the double rewards, a constantly increasing benefit of watching ads is when you log back in the game after being offline for a while. Unlike in most games where there is a limit as to how much you can earn offline, Rocket Sky! continues to keep you earning offline rewards indefinitely. This will be greatly beneficial for you especially if you have done several upgrades on the offline rewards. As such, make it a habit to always turn your Wi-Fi on before you log in the game and watch the video ad to double offline rewards. You can always just turn it back off again if you are in no mood to watch additional ads as you play.

And that is all we have for our Rocket Sky! guide. We hope that these tips, cheats and strategies can help you break records and unlock all the additional rockets and planets in the game. If you have unique ideas that you think should form part of our list, then don’t hesitate to let us know in the comment section below!

How do i claim money earned?

U have to upgrade it does that with everything new planet

How does it end. I've got all the rockets and all the planetsAnd I've maxed out on all my extras